WSU Basketball: Can Ken Bone pull his master plan together before it's too late?

At his previous job at Portland State, Ken Bone's offenses were characterized by balance and shooting ability. We've seen none of that at WSU, although it seems that's what he tried to build for this year. But the best laid plans of mice and men ...

Share All sharing options for: WSU Basketball: Can Ken Bone pull his master plan together before it's too late?

As I watched offense stall for substantive periods on Saturday, I thought to myself: "It's like I've seen this before!" And no, it wasn't because I just saw it on Wednesday. And last Saturday.

I actually was having flashbacks to last year ... and two years ago ... and three years ago.

Truth be told, despite cosmetic differences, there's really very little difference between any of Bone's offenses at WSU and this one; at their philosophical cores, they are designed to do one thing: get the ball to the best player in scoring spots and let him do whatever he can do with it to try and put the ball in the basket.

When that breaks down -- as it did for (sometimes prolonged) stretches the past three games, thanks to Pac-12 opponents seriously overplaying Motum -- the result is some of the most aesthetically unappealing basketball you'll see. Passes that go nowhere, half-hearted cuts, players standing around looking at each other like "what do we do now?" ... I mean, it's precisely the kind of stuff that makes teams both unsuccessful and uninteresting, combining to form the cardinal sin of any team trying to get a fanbase to care. It just looks ugly. Really ugly.

Sometimes it's so ugly, I marvel at the fact that Ken Bone came to WSU with a reputation as an excellent offensive coach. But in looking through Bone's four years at Portland State, I noticed something I had heretofore overlooked.

Never -- not even once! -- did Bone have an offense that philosophically resembled the ones he's trotted out every year since arriving in Pullman. Here's what I mean by that, since I obviously didn't really ever get to watch Bone coach at Portland State. 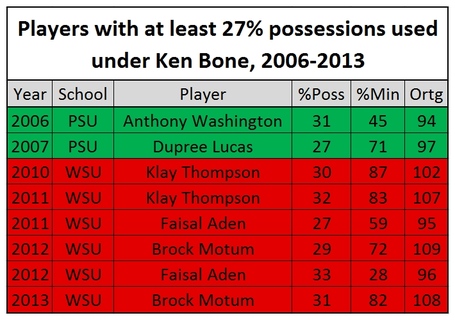 For each of the past four years, WSU has had a player -- first Klay Thompson, then Brock Motum -- who played at least 70 percent of the team's minutes while using at least 29 percent of its possessions while he was/is on the floor. By anyone's definition, that's a true go-to guy. (For comparison, DaVonte Lacy and Mike Ladd each use about 21 percent of possessions this season; Reggie Moore used 23 percent last season.)

Which, of course, begs a fairly obvious question: Why hasn't he replicated that here?

Early on, the simple answer was personnel -- Bone inherited a roster saddled with young players generally ill-fitted for what he wanted to do. And thanks to the way Tony Bennett handed out scholarships, most of them weren't going anywhere anytime soon, unless Bone wanted to run them off campus. (He wouldn't be the first coach to do so.)

I'm reminded of Bone's attitude towards Thompson's sometimes-horrendous shooting in 2010, in which Bone said, paraphrasing, that Klay has the green light and needs to just keep shooting because he's by far the best option WSU has.

I obviously don't have any special insight into what Bone was thinking, but it isn't much of a leap to conclude that the coach doesn't think too much of the rest of the roster's ability if he says that. And while I don't recall him saying that in the past few years, the fact that the game plan has changed very little in the time since -- other than Faisal Aden also being allowed to shoot whenever he feels like it -- is telling. I think it tells you exactly what he did and continues to believe about the ability of the rest of the roster.

Now, you might be saying to yourself, "How do you know? What if this is the way he actually would prefer to do it and he just didn't have that kind of player at Portland State?" In this case, I think an examination of what Bone expected to have this season -- after finally being able to sign a full class -- is revealing. Check it out:

DiIorio and Longrus don't quite fit neatly here, and obviously you can quibble with Motum's placement -- he'd likely swing back and forth between forward and center. But I think the conclusion is pretty clear: Bone was trying to build a team run by a pace-pushing point guard that is littered with shooters who can punish an opponent for paying too much attention to any one guy. This sort of team doesn't need a plethora of elite athletes -- which WSU has never had. It simply needs to shoot well enough to create enough space for the occasional dribble drive by the point guard or post move by the center. 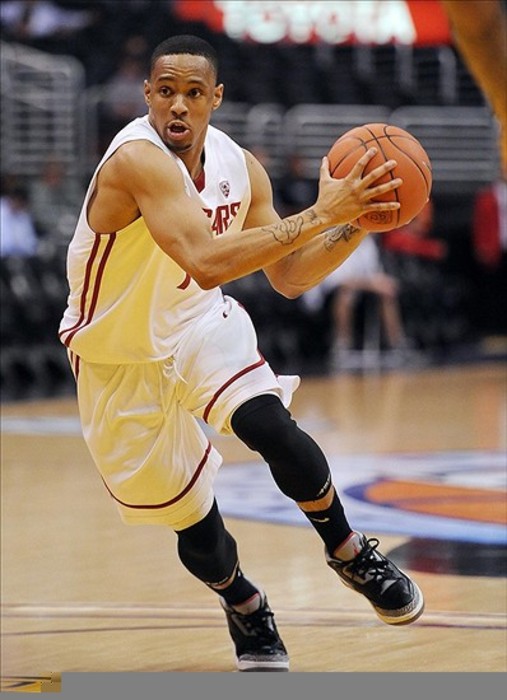 WSU would be a lot closer to Bone's vision with this guy driving the bus. (Photo: Jayne Kamin-Oncea, USA Today Sports)

In other words, it appears as if he was trying to create the exact sort of team he had at Portland State.

Of course, it didn't work out that way. Moore, a ticking time bomb, went off and got himself kicked off the team. Johnson didn't fully qualify out of high school, while Peters didn't qualify at all. Simon transferred. What looked like a deep squad with a lot of weapons -- including one of the top scorers in the league -- suddenly became just seven deep without a distributor or enough shooters.

So, Bone did what he's done for three years: Run the offense through his best player, give him ultimate freedom to do whatever he wants, and hope for the best.

Unfortunately, the best this team has been able to do offensively is something approximating pretty awful. They're outside the top third nationally in adjusted offensive efficiency, and through three Pac-12 games, they're dead last in the conference in effective field goal percentage and 10th in points per possession. Sure, they've faced a couple of tough defenses in Stanford and Cal (I think the jury's still out on whether Washington's rejuvenation is real or opponent driven), but let's not pretend those are elite defenses, even though the Cougs made them look that way.

Both Washington and Cal purposed to deny Motum the ball, leaving his teammates to try and score themselves. And they've struggled. But this is where I start to wonder things. Things like, Are they struggling because the supporting cast just stinks, and that's it? Or because they don't have a point guard?

Or is it because they've been directed from the bench to get the ball to Motum, and when they can't, they're left to run some sort of "motion" in 15 seconds or less, which inevitably will end badly?

While the point guard matters, I'm starting to give much more weight to the latter, given that the confusion we see when the shot clock runs down looks about the same as it has for four years -- the only difference is that Moore isn't around to pound the rock into the ground and hoist up a 15-foot jumper anymore. Bone appears to have created a culture where one guy can do whatever he wants and the other four players on the floor understand in no uncertain terms that their role is to cater to that guy. Freelancing is discouraged, and they also understand that when the ball goes into that black hole, it's probably not coming back out, so it's best to stay out of the way altogether lest they draw their defender to Motum, who is a poor dribbler and passer in traffic.

Of course, I could be way off base. Maybe everyone but Klay and Motum really did/does just stink. But that seems a bit far fetched. 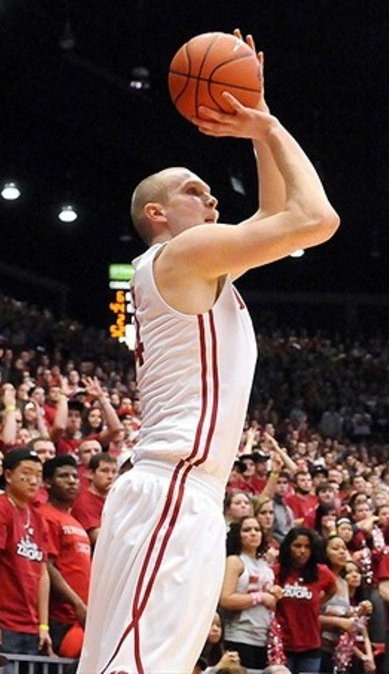 This guy would have helped, too. (Photo: James Snook, USA Today Sports)

Whatever the actual situation, the bottom line is that the offense is not really working -- again -- and Bill Moos has to ask himself some hard questions about whether it's going to work in the future. You can say this year's roster is just a bit of bad luck, but you must acknowledge that Bone is the one who chose not to seriously recruit a point guard for four years, and he had to know (or should have if he didn't) what he was potentially getting into when he dipped into the academic cesspool that is Westwind Academy, where Johnson and Peters attended school for part of last year.

The contract situation might make all of this moot anyway, but let's put that aside for a minute; is it enough for Moos to know that the roster is still really young and will be adding both Johnson and a dynamic point guard (Ike Iroegbu)? Does that inspire confidence? Or does the fact that Bone could only cobble together one team that even dabbled on the fringes of the NCAA tournament bubble -- despite featuring perhaps the best player in school history and coaching in the weakest Pac-10/12 anyone can remember -- convince him that Bone just isn't the guy?

I'm torn. On the one hand, Bone has proven what he can do with the right weapons. I don't care if it's the Big Sky or Seattle Pacific -- if you can coach, you can coach. But recruiting is part of the job, and sometimes you just get a feeling that it's not working. Sadly, I feel like it's not working -- the same achy feeling in my gut I got after the second year of Paul Wulff. Bone obviously has been more successful than that, but ultimately, I just don't feel comfortable with what I see, irrespective of the ancillary issues.

But he's certainly not going anywhere before March, so here's what I'd humbly suggest in the meantime. I'd start by putting Motum at the 4 and Shelton at the 5 and run a standard motion offense without concern for force feeding Motum anymore. They say a rising tide lifts all boats, and an offense that does more to create opportunities for the other guys should open opportunities for Motum. This doesn't mean they shouldn't ever run sets for Motum -- I just would like for them to do it a lot less frequently.

It's not like this sort of thing is impossible to implement. Just think back to UCLA in Pullman in 2011 for evidence of that.

I just know something's gotta change. Because at the rate we're going, all we're going to have left this season is wondering whether Ken Bone should get the opportunity to coach the kind of roster he's been trying to assemble all along.