In the Postmortem, we throw the 68-61 loss to the No. 16 Oregon Ducks under the microscope. Guess what? Shooting is kind of a big deal!

I had originally planned on doing one of these after every game, but last weekend got away from me for various reasons. The good news for me? Last night's loss to Oregon fits in perfectly with what I was going to write about! 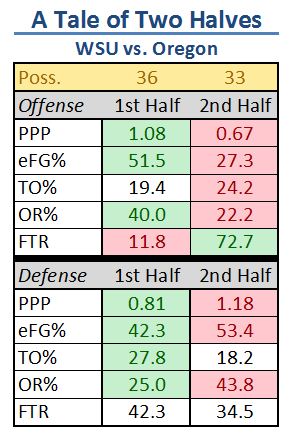 There's always the temptation to complicate basketball. We analyze strategy, where on the floor a team should attack, etc. But one of the reasons I love basketball is that, ultimately, players have to make plays, and so often those "plays" are just making shots. If there was an offense out there where a team could score no matter the personnel, everyone would be running it.*

*At one time, people thought that of the Princeton offense. Yeah, that's worked out great for Craig Robinson!

Which brings us to the Cougs. Do I wish they'd be a little more disciplined in their screen setting? Do I wish they'd cut with more conviction? Of course. But let's not kid ourselves into thinking that would create some sort of revolutionary change in production. I mean, be honest: Was anyone here lamenting those things a week ago when WSU was lighting up Utah? But I sure heard the cat calls after Colorado ... even though I saw no noticeable difference in the frequency of open looks against the Buffs.

But then again, that's the story of the season, isn't it? It's led a lot of people to question Ken Bone's job security. I guess where you land on that depends a lot on what you think about whether he should have the ability to coach his team to a couple of more buckets a game. It's a legitimate question, I think.

I don't think people are giving Oregon enough credit. That's a darn good team that came back on the Cougs, particularly defensively. The Ducks rank 21st nationally in adjusted defensive efficiency -- tops in the conference. It's not hard to see why. They're long and they put tremendous pressure on the ball.

Then there's E.J. Singler, which ... yanno. Thank God we only have one more game against that guy. I'm beyond ready for him to graduate or die* or something.

I know there's this temptation to think the Cougs "blew another one," but this isn't Pepperdine or Texas A&M. Against the Waves, the Cougs' win probability -- the likelihood they were going to finish the game with a win, taking into account the game state and the skill of the teams -- was over 95 percent with both three minutes to go in regulation and three minutes to go in overtime (via kenpom.com). Against the Aggies, it was over 75 percent seven different times in the last nine minutes, and only dipped below 50 percent twice -- once when A&M took a one-point lead with 2:30 to go, and the second time when the clock expired.

Last night? The Cougs' win probability was above 50 percent for all of 30 seconds. No joke. It was right at the beginning of the second half. Based on what we know of these two teams, the comeback was no surprise -- despite our emotional investment that convinces us otherwise.

Speaking of running out of gas, these problems at the end of games are reaching comical status. My working theory is just that the rotation just isn't deep enough to give the Cougs reasonably fresh legs down the stretch. However, that's purely anecdotal. I'm going to try and find some time to dig into the play-by-play data to see if there are any nuggets in there that might reveal what's going on. I anticipate it will be a bit time consuming, so if for some crazy reason you're interested in helping me out, shoot me an email at cougcenter(at)gmail(dot)com.

So, Keaton Hayenga took a 3 at a critical juncture. Here's what Ken Bone had to say about that.

"Keaton’s been lighting it up in practice," Bone said. "Not a real active kid, not super quick, so sometimes it’s hard to defend at this level.

"But we thought situational, if there’s a situation we can put him in to get a shot up, he can shoot it."

WSU was down 7 with 1:30 to go. Hayenga is a walk-on who hadn't played in the game, had played just 19 minutes all year, and hadn't played since Idaho State on Dec. 29. If you want to get a guy like that in for a situational 3, you do it when you're leading in the first half, not when you absolutely have to have a three and the player has been sitting on the bench and is approximately 55 actual minutes removed from his last warmup jumper.

If Ken Bone knows that people want him fired, and wonders why ... well ... yeah. High school coaches would get ridiculed for making that kind of a move because a kid has "been lighting it up in practice." And this is the second time he's done it!