Don't let the final margin fool you - there was lots to like in this game from the home team, starting with DaVonte Lacy's monster performance. Let's break it down.

In the wake of last night's victory over CSU Bakersfield, a lot of people seem to be focusing on the fact that WSU defeated the Roadrunners by only six points.

I'll fully admit, the final margin isn't very sexy. Neither was the flow of the game, which was interrupted repeatedly by whistles, thanks to referees calling the game tighter this season. And there certainly were some underwhelming aspects with regards to certain individual performances.

But I really don't understand the rampant negativity, which seems to me to be confirmation bias at its worst. I mean, I don't think this team is going to be very good, but I don't know how you could look at this one game and conclude much of anything. It's getting to a point where I think fans are ripping on the team because saying the team is terrible or that you don't care about basketball is what the cool kids do.

What's expected from the Cougs the season? 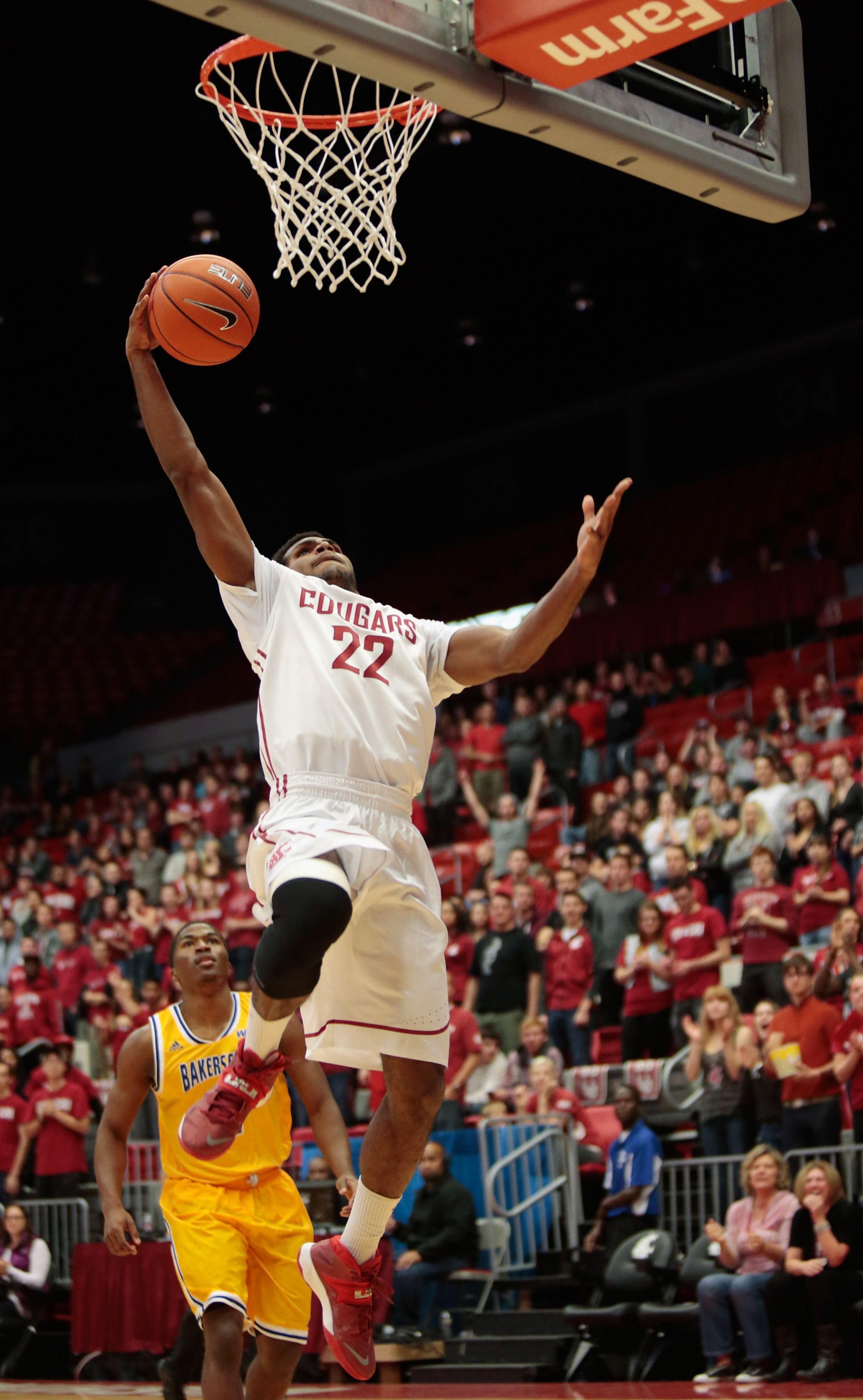 How might the entire season play out? We check in with some notable prognosticators. (Photo: William Mancebo/Getty Images)

There might very well be times when this team is deserving of ire. I don't see where last night was it. They had what might be their worst shooting game of the season, their best player (Royce Woolridge) was awful on both ends, they missed a few free throws down the stretch, and their opponent hit a couple of unassisted threes to make a late push.

Anyway, enough of that. Let's talk about DaVonte Lacy. Because he was freaking awesome.

It wasn't just that Lacy racked up 28 points; it was that he did it in a way that has me cautiously optimistic that he actually has developed his game in a way that he can become a legitimate scorer and not just an opportunistic marksman.

For two years, I've been saying that Lacy is underselling his potential by becoming a spot-up shooter. He didn't earn his scholarship by jacking threes; he earned it by relentlessly attacking the rim. Last night -- for the first time I can remember in his career -- Lacy made a concerted effort to put the ball on the floor and force the issue with the defense. It was a brilliant decision, given how little contact it takes to draw a foul right now.

His free throw rate was an absurd 100, as he shot one free throw for every field goal attempted. That's one very good way to make up for missing 10 threes.

I don't think Lacy necessarily possesses the quickness to do this every night (especially against teams with more guard talent), but -- with his strength -- he should be able to do it enough to make defenses pay for closing out a little too hard at the three-point line. This is a potential game-changer for WSU's offense ... assuming it continues. Check in with me after the next two games.

I also was impressed with D.J. Shelton. A solitary three-point attempt against three two-point attempts and six free throw attempts to go with five offensive rebounds? Yes please! He was incredibly active on both ends (also grabbing five defensive rebounds), and perhaps most importantly, he avoided the foul trouble that plagued every other big man. Highly encouraging.

But therein lies one of the downsides from last night: The frontcourt was a mess outside of Shelton. Junior Longrus, Josh Hawkinson and Jordan Railey combined for 12 fouls ... in 37 minutes. Hawkinson and Railey each played seven minutes and picked up four fouls each. That's 23 fouls per 40 minutes for each of them, in case you were wondering. (I know I was!)

Yes, they were victims of the new rules to some extent. (As if the broadcasters would let us forget.) But this is pretty scary. Railey in particular just looked slow with his feet, which he rarely moved when defending. He mostly preferred just to stick his hands up and be tall, but that doesn't work when people are initiating contact. His final line: 1 point, 0 rebounds, 1 block, 4 fouls. Lots and lots of work to do there.

Hawkinson missed both his jumpers, but he showed a nice nose for the ball and understanding of the game.

On the flip side, I was encouraged by Hawkinson, despite the fouls. He missed both his jumpers -- which looked a little rushed, which is understandable -- but he showed a nice nose for the ball and understanding of the game, picking up three offensive rebounds. He has to get stronger, which obviously isn't going to happen this year, so his usefulness probably will be limited against better opponents. But you can clearly see what the coaching staff likes about him.

Another freshman who looked good was Ike Iroegbu. He exceeded my expectations, honestly. He got to the rim a couple of times, hit a three, dished out a couple of assists ... exactly what you'd hope for out of a guy who is going to play 15 or 20 minutes off the bench as the backup point guard.

Of course, Iroegbu didn't come off the bench last night as part of Ken Bone's Start-The-Guys-Who-Rebounded-The-Ball-Best-In-Practice lineup. Coaches use these gimmicks occasionally, and it led to Lacy, Longrus, Will DiIorio and Brett Boese joining Iroegbu at tipoff. Unsurprisingly, it led to some very strange substitution patterns throughout the first half, which in equally unsurprising fashion produced some pretty ugly basketball. I would assume we'll see something a little more normal against Lamar as the Cougs try to set some roles before traveling to Spokane to face Gonzaga.