You already know the team misses its erstwhile point guard. We dig deep to show you where - and just how much.

Share All sharing options for: Losing Reggie Moore is the worst thing that could have happened to this team

For most people, at the fore of the long list of explanations for WSU basketball's awful season is the September dismissal of Reggie Moore.

Whether that's truly the reason is certainly debatable, given that they still have a league-average offense in Pac-12 play but a defense that rivals only Paul Graham's final squad in terms of ineptitude in the kenpom.com era, but still -- it can hardly be argued that the team misses the guy who was supposed to be their fourth-year point guard.

Moore possessed a skill set not found anywhere else on the team, and anyone who has watched the team closely both last year and this year will tell you that you don't need numbers to prove to you that the team misses him -- it's plain to see just how impactful his absence has been.

But it's always nice when the numbers back up our eyes. And sometimes -- as is the case here -- those numbers can illuminate exactly what his absence is doing to the people around him.

PUT SIMPLY, THE NUMBERS SHOW THAT WSU JUST DOESN'T GET AS MANY EASY BASKETS WITHOUT MOoRE AS IT DID WITH HIM.

We know that Moore was good at racking up assists and (when he wanted to be) good at getting into the lane and to the free throw line. So when we start look into the peripheral stats for reasons behind the offensive decline, it's no surprise that there also has been a precipitous drop in the percentage of the team's baskets made with an assist (59 percent to 54 percent) and the ratio of team free throw attempts to field goal attempts (44 percent to 35 percent*).

*Some of this also has to do with the fact that WSU has had fewer games this year where they've been leading and fouled intentionally down the stretch.

But if you really want to know where Moore's absence has been felt -- and the crippling ripple effect it's caused -- all you have to do is look at Brock Motum.

Burnt Orange Nation basketball writer Jeff Haley has put together a fabulously useful site at hoop-math.com, where his laptop scours play-by-play data to compile some incredibly informative statistical breakdowns. It's not perfect, as it's missing the play-by-play logs from a few WSU games and is reliant on being able to accurately extract information from play-by-play logs that aren't always accurate themselves, but it's certainly complete enough for our purposes.

Last season, Motum was Pac-12 player-of-the-year caliber. This year ... not so much. He's still averaging 18 points a game, but he's playing more minutes and taking a lot more shots -- his effective field goal percentage has dropped 10(!) points. Additionally, when you compare his his offensive rating (an individual efficiency metric where 100 is average) in Pac-12 play from last year to this year, it's down 15 points -- from 111 to 96. Essentially, he's giving WSU 15 percent less production than he was a year ago.

Remember back when Motum was a reserve in his first couple of seasons -- you know, back when Grady Clapp (he used to write here, I've been told) was advocating for the Aussie to play more? While he struggled on defense and rebounding, he was an ultra efficient scorer, mostly because of a preternatural ability to move without the ball, find space around the basket and make himself available for a pass and easy finish.

What allowed him to become a dominant player last year was that he layered a reliable jumper and the ability to put the ball on the floor on top of that. But he still picked up his fair share of easy buckets. This isn't just anecdotal; Haley's data shows us that last season, 62 percent of Motum's shots were at the rim. He made 67 percent of those shots, with a whopping 61 percent of those coming via assist.

This year? Just 37 percent of Motum's shots are at the rim, meaning he's taking more jumpers. A lot more. Visually: 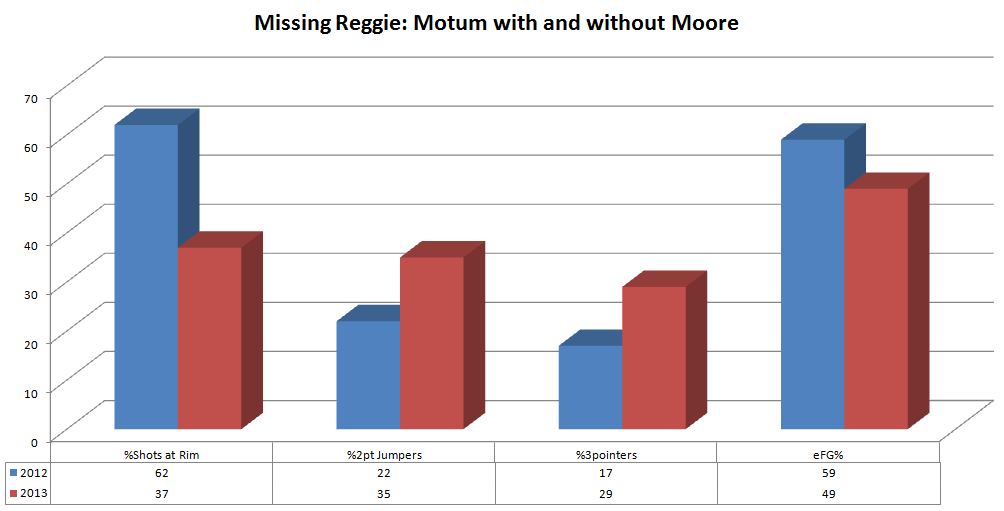 The reason this is problematic should be fairly obvious, but just to spell it out: Even during that great season last year, Motum was making just 36 percent of those 2-point jumpers. That probably seems awful, but really -- that's probably the lowest percentage shot on the floor for a lot of guys. Klay Thompson only shot 34 percent on his two-point jumpers in his final season. Mid-range jumpers quite often contested, and while they can be used to keep defenses honest, most players will eschew them because the payoff just isn't as great as the higher percentage look at the rim or the open look from three, where players often will shoot the same percentage but get 50 percent more points for their effort.

Because Motum just isn't getting the same number of easy looks at the rim -- whether because of the assists Moore provided or because defenses had to respect Moore's penetrating ability -- he's settling for more jumpers. And while Motum is a good shooter for a big man, he's not a good enough shooter for it to be his main weapon.

The same pattern more or less holds true for the rest of the team as well: 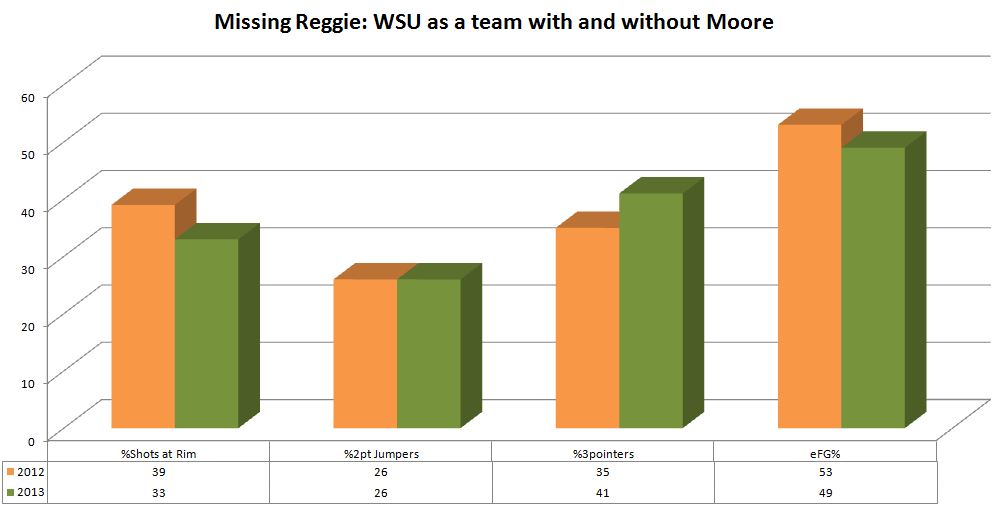 While the team isn't shooting more two-point jumpers overall (this is because Reggie used to shoot a ton of those - 50 percent (!!!) of his shots), they're taking fewer shots at the rim and taking more threes. the percentage of shots assisted at the rim has dropped from 55 percent all the way to 45 percent, and not coincidentally, the percentage of shots made at the rim has dropped from 64 to 60.

I believe this all can be traced back to Moore, who assisted on 33 percent of WSU's baskets when he was on the floor last year -- 58th most in the country. Put simply, the numbers show that WSU just doesn't get as many easy baskets without Moore as it did with him, and that has made a huge difference in the team's overall offensive efficiency.

I tried to make the case shortly after Moore's dismissal that the team could end up being better off without him. I was certain replacing him in the defensive rotation would result in improvement on that end, and I hoped that the offense would eventually adjust to his absence and figure out ways to get the ball to Motum in scoring spots.

In the end, neither of those things happened. And since I don't think it's possible the defense could be any worse with Moore getting 36 minutes a night, the conclusion is clear.

I was wrong. This team was pretty much screwed the moment it lost Reggie Moore.