WSU unveiled a new look for the basketball team on Thursday, with some modest tweaks to the former set and a special appearance by the WSU fight song.

Share All sharing options for: New WSU basketball uniforms are different, the same

The more things change, the more they stay the same.

Let's start with the biggest improvement. Gone is the awful chevron-esque collar design that, well, who knows what the heck the purpose of that was. It was distracting, unusual and was just there I assume for the sake of being there. Now, the collar simply matches the color of the rest of the jersey. It's boring, certainly, and a little Cougar head would look nice below the V of the collar, but it certainly doesn't detract from the overall look.

The other major change is located on the back. 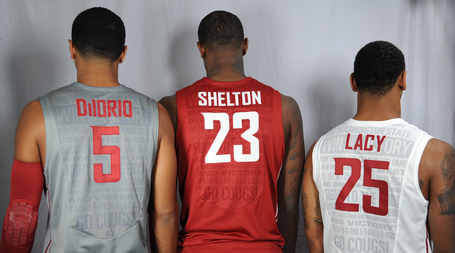 Sublimated underneath the name and number are the lyrics to the WSU fight song. This is nothing new as far as Nike is concerned; they've done these sublimated patterns for everyone from Duke to the USA National Team. Now, apparently, it's WSU's turn. I always thought Nike would've gone with Bryan Hall for this design, but instead they chose the fight song. There's nothing wrong with that. Furthermore, the typeface makes the design resemble the papers Coug fans hold up while the opposing lineup is introduced. I don't think this was intentional, but it is a cool bonus. As for the look itself, I'm OK with it, although it does make the back of the jersey -- the white one in particular -- look dirty from afar if you don't know what's really going on.

It appears -- and I hope this is the case -- that the gray jersey is a lighter shade of WSU's secondary color. The previous set was too dark, and the crimson numbers never popped. Still, crimson directly on gray isn't the easiest to see, and I really wish there was some kind of white outline around the school name and numbers. Likewise, I wish there was a gray outline around the team name and numbers on the crimson and white jerseys. Doing anything else looks, quite frankly, a bit cheap.

I recommend hitting up the official WSU Athletics site for the full gallery of the new uniforms. You'll notice that the shorts are not pictured, which I can only assume means that nothing has changed. This is a positive, because our current shorts design is awesome. I hold out some hope that the gray shorts don't change to white along the lower border. Solid gray would look more uniform and would match the design of the crimson and white shorts.

Overall, the Cougs made this current set of uniforms look like what they should have been in the first place. For a letter grade, I'd give it a B+. I'd still like to see outlines around the team name and numbers. I also would have liked to seen Nike's more modern collar design, which is essentially what WSU had, only they colored in the wrong part.

The jerseys still suffer from a case of banality. When you're a traditional power, simple is powerful. When you're an underdog program sometimes it's best to think outside the box a little bit. Still, I have to remark that this is probably the best set of uniforms WSU basketball has ever donned. That's not saying much, given the team's sometimes bizarre history. But it is saying something.