The comparisons between the freshman and one of the all-time greats at WSU were a little too convenient at first, but now it appears they just might be apt.

It was almost too easy. Johnson was similar in build to Thompson -- Rivals actually had them listed at an identical 6-foot-5 and 185 pounds as seniors -- and he came with a similar reputation as a dead-eye shooter. Johnson also was the first four-star, top-100 recruit for the school since Thompson in 2008.

Johnson didn't exactly shy away from the comparisons.

"Going to the NBA is one of my goals," Johnson told Percy Allen of The Seattle Times. "What they did with Klay, that was important."

And when Ken Bone described Johnson on signing day, it sounded an awful lot like he was describing his former player.

"From what we have seen as a staff, (Johnson) is as good a shooter, at least on the West Coast, as there is out there," Bone said. "He can really shoot it. The nice thing about him is, he's not only a good shooter, but he's a very a good athlete. And sometimes that's what is difficult to find. That's where Que is really good."

Comparing a high schooler to perhaps the best player ever to wear crimson and gray -- fresh off being the 11th pick in the NBA Draft -- probably got a lot of people excited. But it made me cringe just a little bit. That's a heck of a lot to put on a kid before he's ever played a minute.

Feel free to go ahead and let those comparisons fly.

Johnson got off to a bit of a slow start, thanks to a preseason situation with a stress fracture in his leg that led to some curtailing of his workout time during preseason practices. Coming off the bench, Johnson often looked a bit lost on the floor, something even freshman who don't miss practice time sometimes struggle with.

But he became less bashful as time went on, and he's used more and more possessions (right) to the point where now, with leading scorer DaVonte Lacy out for an extended time with a rib injury, he's more or less become WSU's go-to guy as he's proving to be the scorer in the Thompson mold that he was promised to be.

He's not a clone, though; while the differences in their statistical profiles aren't substantial, they're there, and they're actually in the sorts of places that get you pretty excited for Que's future as a Coug.

First off, here's how they profile(d) as shooters during their freshman seasons:

If you remember Thompson as a freshman, spotting anything other than a jump shot from him within the confines of Tony Bennett's offense was sort of like a bigfoot sighting. His two-point percentage and free throw rate reflected that. (However, it's important to note that 43 percent on twos really is pretty good when they're all jumpers.)

Johnson, on the other hand, has been more aggressive to the basket. He's not been Reggie Moore aggressive, but he's gone to the rim enough to draw some fouls and get to the line in order to keep defenses a least a little bit honest on his jumper. It's resulted in a substantially higher shooting percentage from inside the arc. He's also shooting more threes than Thompson did, and when you combine the better production from two with a similar percentage on a higher number of threes, you get a startling result.

Que Johnson is absolutely blowing freshman Klay Thompson out of the water in efficiency.

When measured by offensive rating (what's that?), Thompson was actually a bit of a below-average offensive player as a freshman. Johnson, conversely, is well above average. If you're enjoying these comparisons, how about this one? Other Pac-12 players this season who have used a similar amount of possessions and posted similar offensive ratings include Arizona's super frosh Aaron Gordon and Cal's Richard Solomon.

And how about this one? Using possessions at this current rate, he'll soon be over 24 percent on the season. It's not like 24 percent is some super special number, but it does stand as an arbitrary marker of a "major contributor" at kenpom.com. If he's still this efficient through the next couple of weekends, he'll be right around 10th in the conference in efficiency among major contributors. That'll be ahead of Colorado's Askia Booker, Stanford's Dwight Powell and ASU's Jahii Carson.

Maybe, though, you're thinking his efficiency will drop off as his usage continues to remain high. I'd submit that's probably a bit of a valid concern, given this chart. These are three-game rolling averages of his usage (red line) and efficiency (blue line) -- the dashed lines are each individual game (click for bigger): 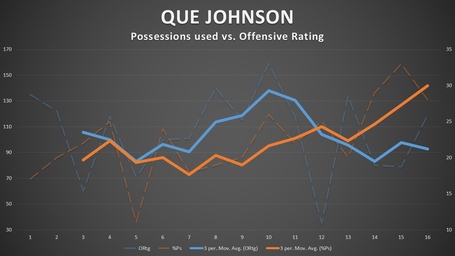 His efficiency certainly has trended downward a bit since Lacy's injury. However, it's still good -- especially given the dramatic increase in workload -- and this sort of downward arc is what you generally see out of players as their usage goes up, especially within the context of a single season. And while I have no actual data to back this up, I'd guess this sort of decline is especially common when possessions have shifted quickly to a player at the expense of the absence of the team's highest usage player, which creates an extra burden in terms of both shot quantity and defensive attention.

If Johnson can continue to hang out in the 105 range while his usage is around 30 percent? I'll bet you can guess what kind of territory that is. And if you're not good at guessing games, here you go: In 2011 -- as a junior -- Klay Thompson used 32 percent of possessions with a 106.5 rating.

Maybe it's way too soon to dream about what kind of player Que Johnson can become. Is he destined to become as good as Thompson? I'd go back to the original point -- that's a lot to put on a kid, even after he's shown a lot of potential.

One thing is clear so far: In terms of natural ability, Que Johnson appears to be every bit the player Thompson was as a freshman, perhaps even more so. But Thompson is the rarest kind of athlete -- the one with both natural talent and a single-minded obsession to be great. Does Que have that kind of drive? Only time will tell; we'll know a lot more when he gets a fully healthy offseason to develop his game.

And maybe we're getting way ahead of ourselves. But in a season such as this, it sure is fun to dream a little bit. It's about all we have left.