WSU Basketball: Cougars fall to No. 15 Colorado in overtime

A career night by Dexter Kernich-Drew, who scored 24 behind six made threes, isn't enough.

Share All sharing options for: WSU Basketball: Cougars fall to No. 15 Colorado in overtime

In what has become a familiar storyline in the Ken Bone era, the WSU Cougars once again didn't have enough down the stretch of a tight game as No. 15 Colorado escaped Spokane Arena with a 71-70 overtime victory.

With the loss, the Cougars are still without a win in the Pac-12 season after three games.

Perhaps the most discouraging part of the loss is that it came with WSU finally snapping out of its shooting funk by hitting 13-of-23 shots from behind the arc, including 6-of-8 for Dexter Kernich-Drew. The Australian finished with a game- and career-high 24 points. It also included a three-pointer in the final seconds of regulation by Que Johnson to send the game to overtime.

The reason that wasn't enough? Colorado shot a whopping 38 free throws, of which they made 26. The Cougs? Just three attempts, a stunning disparity.

Although extreme, perhaps the advantage shouldn't have been shocking: The Buffs came into the game as one of the very best teams in the nation at getting to the free throw line, while the Cougs came in as one of the worst -- against a Colorado team that also is superb at preventing free throws. And while it's easy to complain about the difference, it certainly didn't seem as if Colorado was getting away with an excessive amount of contact around the basket on defense, and the Buffaloes were relentless around the rim.

How relentless? Check out Colorado's shot chart, via our own Kyle Sherwood: 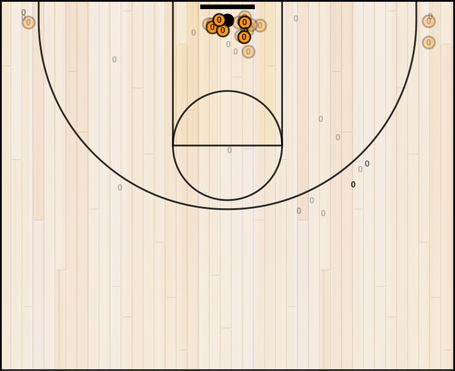 Sixty-five percent of Colorado's shots came in the paint, and that was WSU's undoing in overtime, as shown by the darker basketballs. Josh Scott repeatedly abused Junior Longrus around the basket, whether it was posting up or snagging offensive rebounds, scoring eight points, the last of which gave Colorado an insurmountable six-point lead with two minutes to go in the extra period.

That's not to bag on Longrus, who played his tail off with Jordan Railey completely ineffective and Bone reticent to use Josh Hawkinson in crunch time. He's already a weak defensive rebounder (he actually grabs more of his team's own misses than opponents'), and he was giving up three inches to Scott. The results in overtime -- after Longrus gamely battled for heavy minutes -- were unsurprising.

All those shots around the basket belies how good the WSU half-court defense was for most of the night. Heck, the Cougars even held Pac-12 Player of the Year candidate Spencer Dinwiddie to just 6 points, 2 rebounds and 2 assists.

But WSU couldn't stop Colorado in transition, as the vast majority of those opportunities around the basket came with the Buffaloes relentlessly attacked the basket off both misses and makes with the Cougs getting beaten down the floor repeatedly. I'm going to assume WSU knew about Colorado's propensity to attack in transition going in -- the Buffs take 35 percent of their shots in transition, per hoop-math.com -- and the inability to slow it down really at any point in the game was disappointing.

Another reason Colorado was able to hang on in this one? Despite the Buffaloes typically committing their fair share of turnovers and the Cougars being pretty good at forcing them, Colorado gave away the ball just six times on 68 possessions. You would normally expect about twice that number.

D.J. Shelton had himself a nice game, controlling the defensive glass; Colorado had just five offensive rebounds in regulation as he collected 12 all by himself. He also had 14 points. Royce Woolridge also had a double-double with 10 points and 11 assists, thanks to a meaningless banked three at the end of overtime. He shot just 4-of-14 overall.

There's certainly no shame in losing to the No. 15 team in the country in overtime, especially when playing without your best player -- DaVonte Lacy missed another game after suffering another injury in Sunday's loss to Arizona State. This was no embarrassment on the order of the Arizona debacle.

However, it's yet another near miss added to the Cougars' already distinguished list of late-game flameouts: TCU, Butler, St. Joseph's ... and now Colorado. Which, of course, is to say nothing about the late-game problems from last season. Despite Woolridge's 11 assists, WSU still lacks a point guard to direct traffic and break the defense down, as was evidenced repeatedly late in the game as Colorado reached down deep for defensive stops and WSU repeatedly stalled.

Now the Cougars return to Pullman on Sunday with the hopes of picking up their first conference win against Utah.