With Ernie Kent and DaVonte Lacy on tap to take center stage, we take a quick look at where the team stands heading into the season.

New WSU basketball coach Ernie Kent and his star player, DaVonte Lacy, are in northern California for today's Pac-12 media day, which follows the "PREseason FUNKtion" of a couple of weeks ago as the next milestone on the way to the November 14 tipoff at UTEP.

If you're interested in catching what Kent and Lacy have to say, the schedule for their appearances (gone are the days of the solitary 10 minute Q&A on stage) is at the bottom of the post.

But seeing as how basketball likely has fallen off most people's radars since Kent's hiring -- and seeing as how the "analysis" at media day is about as surface as it comes -- let's take a cursory look at where the Cougs stand heading into Kent's inaugural season before we dive into some deeper analysis in the coming weeks.

There could be three Cougars in the NBA this season with Brock Motum on the verge of making the Jazz.

Arizona has watched their game tape this week and they see an opportunity to have the game of their lives this Saturday.

Anytime a team gets a new coach, that's bound to dominate the narrative, and that's certain to be the case for WSU -- especially today, given the combination of Kent's history in the conference and penchant for quotability.

The Cougars finished with only 10 wins last season -- including just 3-15 in the Pac-12 -- which resulted in Ken Bone losing his job with two years left on that hefty seven-year contract signed when Jim Sterk was the athletic director. Can Kent turn the team's fortunes around immediately? It's likely every development around the team for the next four-plus months will be framed in that context.

Coaches at WSU don't generally lose their jobs because their teams are loaded with talent, so you can imagine what Kent found when he arrived last spring. Still, he has an incredibly nice piece to try and capitalize on in his first year with Lacy, one of the most underrated players on the west coast.

Lacy, a senior guard, transformed himself from a primarily a spot-up three-point shooter in his first two seasons into a true go-to scorer last season -- about three in every 10 possessions ended with the ball in Lacy's hands, fourth most in the conference. It wasn't merely that he doubled his scoring output from 10.5 points per game to 19.4, it was how he did it: He still shot a ton of threes, but he also shot more twos and got to the free throw line with greater frequency, all while turning the ball over less.

There are a whole lot of question marks after that, though. In the back court, Que Johnson (sophomore) and Dexter Kernich-Drew (senior) were average catch-and-shoot wings in 2013-14 thanks to some nearly identical mediocre shooting.

Johnson was a highly touted recruit, but his rust showed after not playing basketball for roughly two years. There's definitely talent there, though, and if Kent can tap into that, it would make a pretty enormous difference for a team that figures to rely heavily on Lacy again.

Combo guard Ike Iroegbu also returns. He flashed some impressive athleticism last year, but consistency was a major sticking point as he seemed to descend into Bone's doghouse. Perhaps a fresh start with Kent is what he needs.

The situation is far more bleak in the frontcourt. No returning player used more than 17 percent of offensive possessions while on the floor last year, and that player is senior Jordan Railey, a transfer from Iowa State who was a complete mess in his first season in Pullman. Unfortunately, he was basically the same player he was for the Cyclones, blocking a handful of shots (kinda the bare minimum for a seven-footer) but grabbing far too few rebounds and committed far to many fouls to be the effective center Bone hinted he would be.

Junior Longrus, now a junior, logged a fair amount of minutes last year, but at 6-foot-7 with a center's skillset, his impact was minimal. Six-foot-10 Josh Hawkinson showed some potential as a freshman, especially as a natural rebounder, but strength was a major issue as he struggled to get into comfortable scoring positions. Six-foot-7 junior Brett Boese can shoot a little, but we haven't seen enough of him in two years to know if he can do more.

To be frank, there's nobody here who excites you with their potential, a la Johnson. 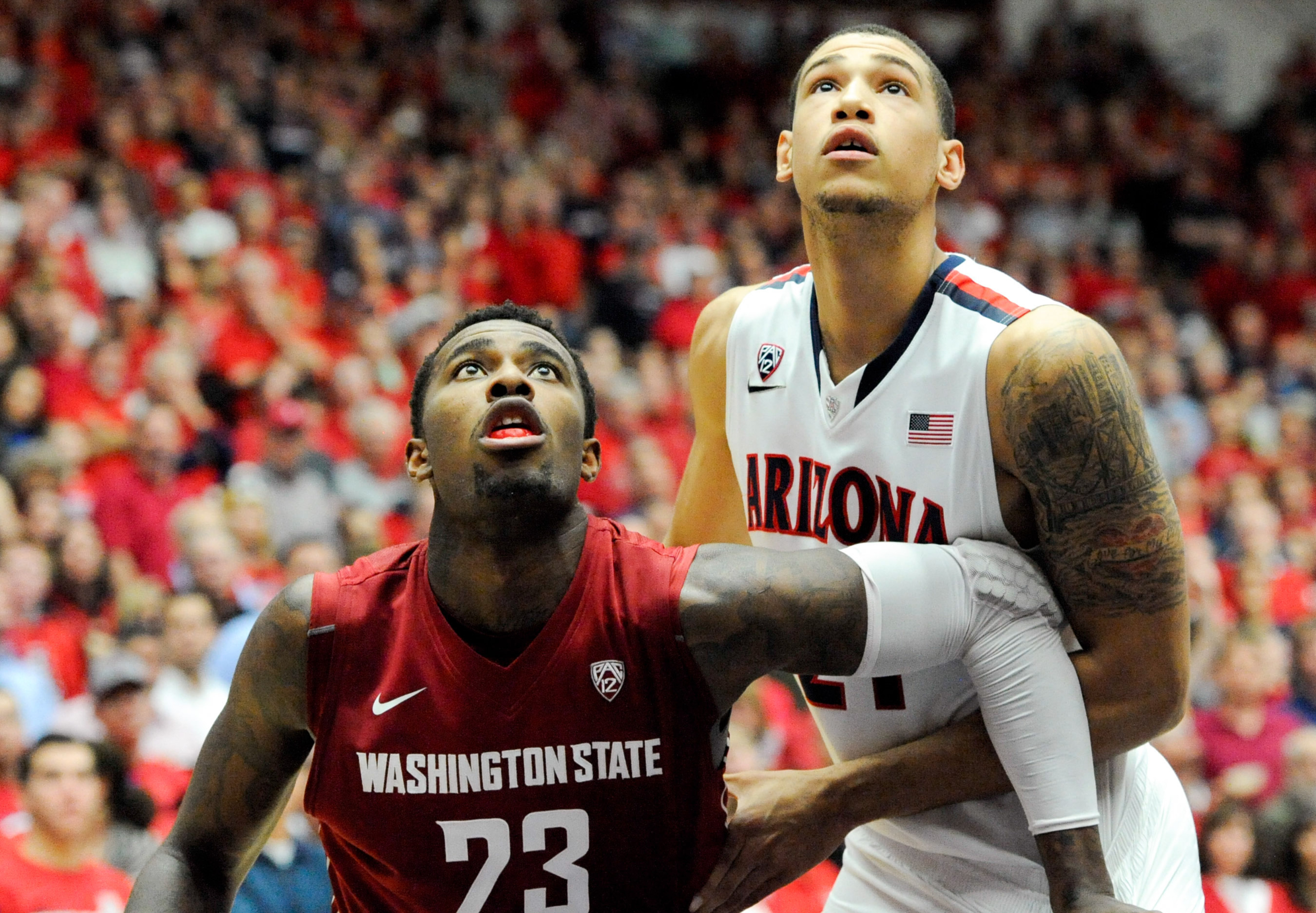 D.J. Shelton, preparing to do what he does best: Keep the other team from getting the ball after a shot. (Photo: Casey Sapio-USA TODAY Sports)

There really is only one departure that stings in terms of production last season, and that's 6-10 forward D.J. Shelton. While he would frustrate fans with his frequent shots from beyond the three-point arc, he was a tremendous presence in the paint, finishing the season as the third best defensive rebounder (by percentage) in the entire country, grabbing three out of every 10 opponent misses. It was a spectacular -- and generally underappreciated -- accomplishment. He also was a reasonably reliable interior scorer ... when he wanted to be.

None of the aforementioned frontcourt players could claim either of those things, and it's questionable whether any of them will be able to adequately replicate Shelton's contribution.

Also gone is starting point guard Royce Woolridge, who exercised his right to transfer as a graduate student. He was pretty awful last season, never getting on track after injuring his shooting wrist during the preseason, so it's not like whoever replaces his minutes will have huge shoes to fill. But he was a competent player as a sophomore, and any bounce back would have been a boost for the team. His minutes will fall to Iroegbu or one or more of the newcomers, any of whom could be an upgrade ... or simply a swap for more subpar production.

Senior forwards Will DiIorio and James Hunter are also is gone, but seeing as how Hunter played only a handful of minutes in his two seasons, probably the only thing you'll miss there is the constant praise from broadcasters about how much DiIorio hustles and "plays the game the right way."

Lots of guys -- generally the case when there's a coaching change -- and all figure to get a shot to have an impact this season.

Kent signed just one frontcourt player, not a surprise given that it's generally slim pickings with regards to big men late in the process. Aaron Cheatum is a 6-7 and 240-pound forward who is reputed to have some "savvy" as an inside-outside player. That's usually code language for "not real athletic but has a little bit of a jumper," but we shall see.

The new coach was able to find some intriguing backcourt prospects, adding guards Jackie Davis, Ny Redding and Trevor Dunbar. Both Davis and Redding probably would be described as combo guards, with Davis leaning more toward the point and Redding leaning more toward scoring. There's no such ambiguity about the 5-10 Dunbar, a jitterbug who is a straight playmaking point guard. He's a superb passer, and it will be interesting to see how his size affects his impact.

Kent also lured center Valentine Izundu away from Houston, but he has to sit out this season.

It would be a surprise if the Cougars are picked higher than last place when the preseason poll is released today. (EDIT: Cougs were picked 11th.) Kent was unable to come up with a significant infusion of talent, and thus WSU appears to be stuck in neutral after the coaching change. Meanwhile, the rest of the conference is on the upswing. Six teams made the NCAA tournament last season, and that figures to be the case again this season. If the Cougars can improve on their 11th place finish of a year ago, that likely should be considered a success.