It's all but a foregone conclusion that the WSU basketball coach will be fired at the conclusion of this, his fifth -- and worst -- season. This shouldn't be any fun for anyone. Let's talk about how we're talking about it.

Share All sharing options for: Ken Bone is nearing the end of the line as WSU coach

Ken Bone is the Washington State University men's basketball coach. For another couple of weeks, anyway.

At some point on or around March 12, Ken will be fired, and the finality of something that Connie, Kendra, Jenae and Chelsea probably have anticipated will set in. As will the reality of what it means for their family. 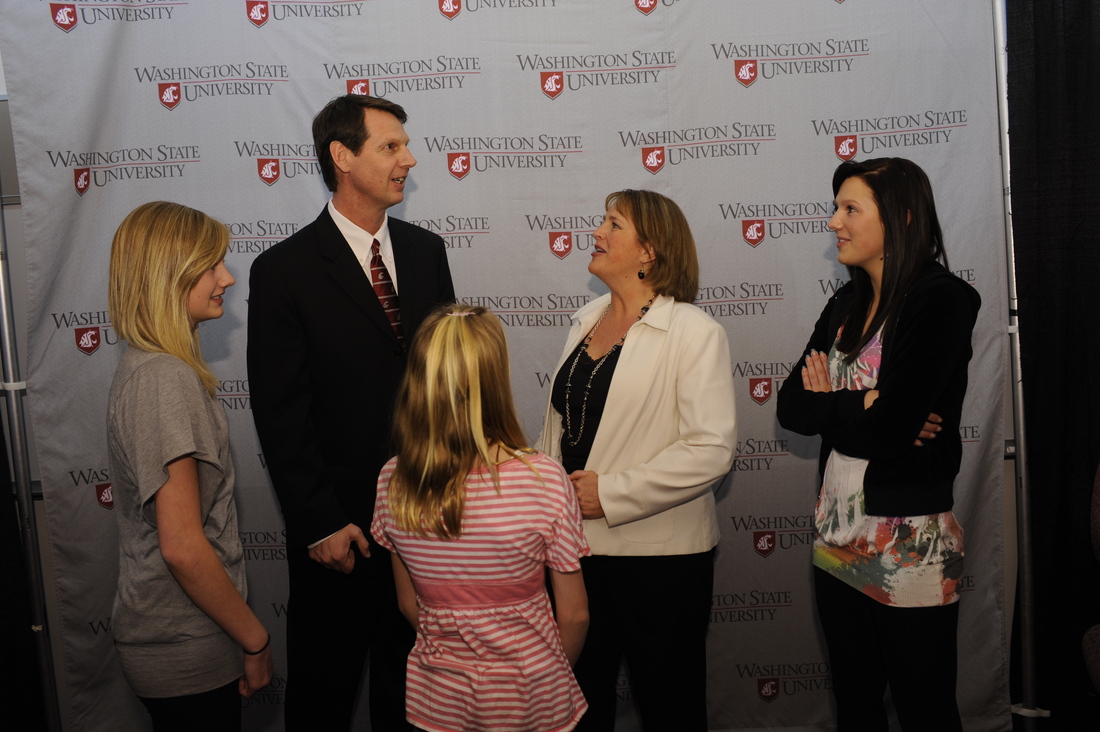 Ken Bone and his family at a happier time - the press conference to announce his hiring. (Photo: WSU Athletic Communications)

"When we left Seattle, (my daughters) were bummed out for a few weeks, but they adapted well and they loved Portland," Bone said back in 2010, a year after he was hired at WSU. "And it's been more than a few weeks now, and they're doing fine, but it's a lot different from Portland.

The impact won't be quite as severe now as it was then, as Kendra and Jenae are now adults. But there are ties to Pullman that come from living somewhere for five years. Kendra is a junior at WSU. Chelsea is a freshman at Pullman High School. She apparently is a pretty darn good athlete: As a 5-foot-8 setter, she is the only ninth grader listed on volleyball team's varsity roster.

Kendra presumably will finish her degree at the school that fired her dad. Chelsea will finish out her freshman year, and maybe even get another year if her dad decides to stick around town while he recharges his batteries, reflecting on how it all went wrong, attempting to learn from this, his first real professional failure.

But Ken Bone is a coach -- it runs in his blood, just like everyone else in his family -- so he'll eventually take another job, which means Connie and Chelsea will have to pack up and leave behind the relationships they've formed, the roots they've put down in the tight-knit Pullman community.

I think about these kinds of things when I see people callously dancing around the open grave of a coach who is about to be fired. It's also one of the main reasons you haven't seen a whole lot of writing around the site speculating about Bone's future, or dreaming about who his potential replacements might be. There are real people involved here, and one of those real people is about to suffer a very public rebuke of his professional passion -- the first such failure of his career. Ken Bone was wildly successful at Seattle Pacific, was widely credited with helping to elevate Washington a decade ago under Lorenzo Romar, and he took Portland State to a pair of NCAA tournaments.

But the end is coming.

How am I so sure? When you're involved with college athletics, there are certain things you don't want to see -- like, say, Charles Robinson or George Dohrmann showing up on your doorstep. And when you're a coach at WSU, you don't want Bud Withers -- the dean of WSU reporters -- writing about how you're a good guy, but your time just might be up. It's like a pre-obituary.

More and more of these types of stories are going to pop up, but I just can't bring myself to write one. Heck, when things were at their worst with Paul Wulff, this is about as far as we waded into the fray until the Apple Cup that year. You won't find any "Paul Wulff must go!" posts in our archives. That led to a funny thing around the Internet, where CougCenter was labeled as the place where the Paul Wulff "apologists" resided. (This sort of thing probably didn't help.)

Apparently, shooting down logical fallacies such as "PAUL WULFF SUCKS AND SHOULD BE FIRED BECAUSE HE WAS NOTHING BUT A MEDIOCRE FCS COACH TO BEGIN WITH" and demanding that the level of discourse be raised equals being an apologist. But really, all we ever asked from our community was that analysis of Wulff's performance be accurate and fair. Maybe he really was an awful coach. Maybe the team really did underachieve with him in charge. But at least support your assertions with facts, and be evenhanded enough to acknowledge that he faced challenges, that the team improved under him, etc.

I still feel strongly I understand the blueprint. Doggone, it's my fifth year and we haven't been able to put it together. ... We've had a hard time getting there because of certain situations. Obviously, that's on me. -Ken Bone, to Bud Withers

Unfortunately, writing about the undecided fate of a coach with any kind of frequency invites that kind of poor "analysis." And for what purpose? Does demanding a coach's head on a platter increase your enjoyment of WSU athletics? Does getting personal with a guy who is by every account a good and decent human being make you feel better?

It sure doesn't do that for me. That's why you haven't seen us write about this hardly at all this year after writing just a little bit about it near the end of last season.

But as the inevitable conclusion draws near, it will be unavoidable. So all we're asking for now, as Ken Bone's tenure comes to an end, is for everyone to be civil and reasoned. Think he should be fired? Cool. I do, too. But let's not fabricate things to justify our positions. Goodness knows there are enough legitimate things to criticize him about.

And as far as writing about potential candidates goes? Well, we'll be holding off on that until after the job is actually open. Even if you believe, like most, that a change needs to be made, Ken Bone has given five years of his professional life to this university. While the cynic would say that he's been well compensated for that (and also will be for the next two years) and therefore is not entitled to any kind of kid gloves, I'd remind you that the man is still human, he's still got a family, and he still gave it his best shot.

"I still feel strongly I understand the blueprint," Bone said to Withers. "Doggone, it's my fifth year and we haven't been able to put it together. I firmly believe that's what you need. We've had a hard time getting there because of certain situations. Obviously, that's on me."

This isn't Little League, and sometimes your best shot just isn't good enough. And when it's not good enough in big-time college athletics, there are consequences. Nobody is more aware of that right now than Bone, who has never taken the easy way out by deflecting blame onto others. Beyond that, his players -- underwhelming as they might be as a group -- continue to play hard for him. I've seen teams that have quit on a coach they know is a dead man walking. This team hasn't done that this year, and didn't do it last year. Having that kind of respect from the players says something about him as a coach.

Let's try and remember this as the university community plays out these final, awkward weeks. He might not have been the coach any of us envisioned -- I advocated for his hiring as much as anyone -- but he's represented our university well in every other respect.

Criticize the coach, but remember he's a man.