With Ken Bone officially out at WSU, we examine why Bill Moos should be looking for coach with a clearly defined "system." The reasons, though, might not be what you think -- and it might lead to an unexpected place.

A couple of years into Ken Bone's tenure at WSU, I wrote a piece extolling the virtues of the coach's flexibility as a tactician.

The premise was fairly simple: There are stats that reveal a coach's stylistic preferences, and what Bone's profile showed was a coach who knows how to identify the strengths and weaknesses of a particular team and is able to maximize and minimize them through stylistic adjustments.

It might seem laughable now that I would write close to 2,000 words lauding that, but remember -- in May 2011, WSU was coming off a deep NIT run and Bone's NCAA appearances at Portland State were still relatively fresh.

After wrapping up another season around the bottom of the conference standings, WSU athletics director Bill Moos has decided to make a change.

Ken Bone fired by Bill Moos Who's on the list to replace Ken Bone?

Even though that 2011 team had missed the NCAA tournament, it was sort of a "keep the faith" piece. It turned out that our faith was unfounded, as things went south over the next three years to the point where WSU has now decided it would rather pay somewhere in the neighborhood of $3+ million over the next two years to a pair of coaches -- the fired Bone and whomever athletics director Bill Moos decides hire -- than continue with Bone at the helm.

Everyone has their own pet theories as to why Bone's tenure ultimately failed. I've seen a lot of people postulate that Bone's failure is proof positive that former athletics director Jim Sterk should have sought out a Bennett disciple to continue building on the philosophical foundations laid by father and son, and now that Bone is gone, the only question is which pack line defense coach current AD Bill Moos should go get.

While I don't blame our fans for pining for the success of yesteryear, this has led to what I believe is a faulty conclusion: That the only way to win in Pullman these days is the Bennett way. I understand it, but I think it misses the larger point, which is why the Bennett way of playing was able to be successful at a school that has had such precious little basketball success over the years.

It wasn't because of the defense.

I mean, it was the defense, but more specifically, it wasn't the defensive system itself -- it was the players executing that particular style to near perfection that enabled a moribund program to be an elite squad on one end of the floor. Put another way, lots of teams run a 2-3 matchup zone and not everyone has as much success with it as Syracuse; lots of teams try to run dribble-drive motion and not everyone has the success Memphis and Kentucky have had with it under John Calipari. Put even another way, consider that Steve Alford's teams have always had a pretty middling to slow pace. This year, his first at UCLA? More than 70 possessions per game, 28th nationally.

Systems do not make the players. Players make the system.

Maybe you think Ken Bone didn't even have a system, but that's just silly; every coach at this level has a "system" -- an ideal way he wants to play. Sometimes it's clearly definable with a name (every Dick and Tony Bennett team for all of history will play a "pack line" defense), other times it's more stylistic (shoot lots of 3s on offense, run in transition at every opportunity, forsake offensive rebounds to get back in transition, etc.). The question is whether the coach can obtain the players necessary to execute his vision.

And that, I believe, is where Bone was probably doomed to fail from the start.

It's tough to identify exactly what it was Bone was trying to do, given that his stylistic indicators indeed jumped around a lot. But I think we can infer a few things. He wanted to emphasize offense. He wanted to play fast-ish -- not breakneck, but not walk-it-up, either. He wanted to spread the floor with shooters, something that should be clear from the plethora of 3s taken by the team and the role of the stretch 4 in his offense as a three-point shooter. He needed a penetrating point guard to make it all go. And he wanted to do it with long athletes who could pressure the ball on the defensive end. 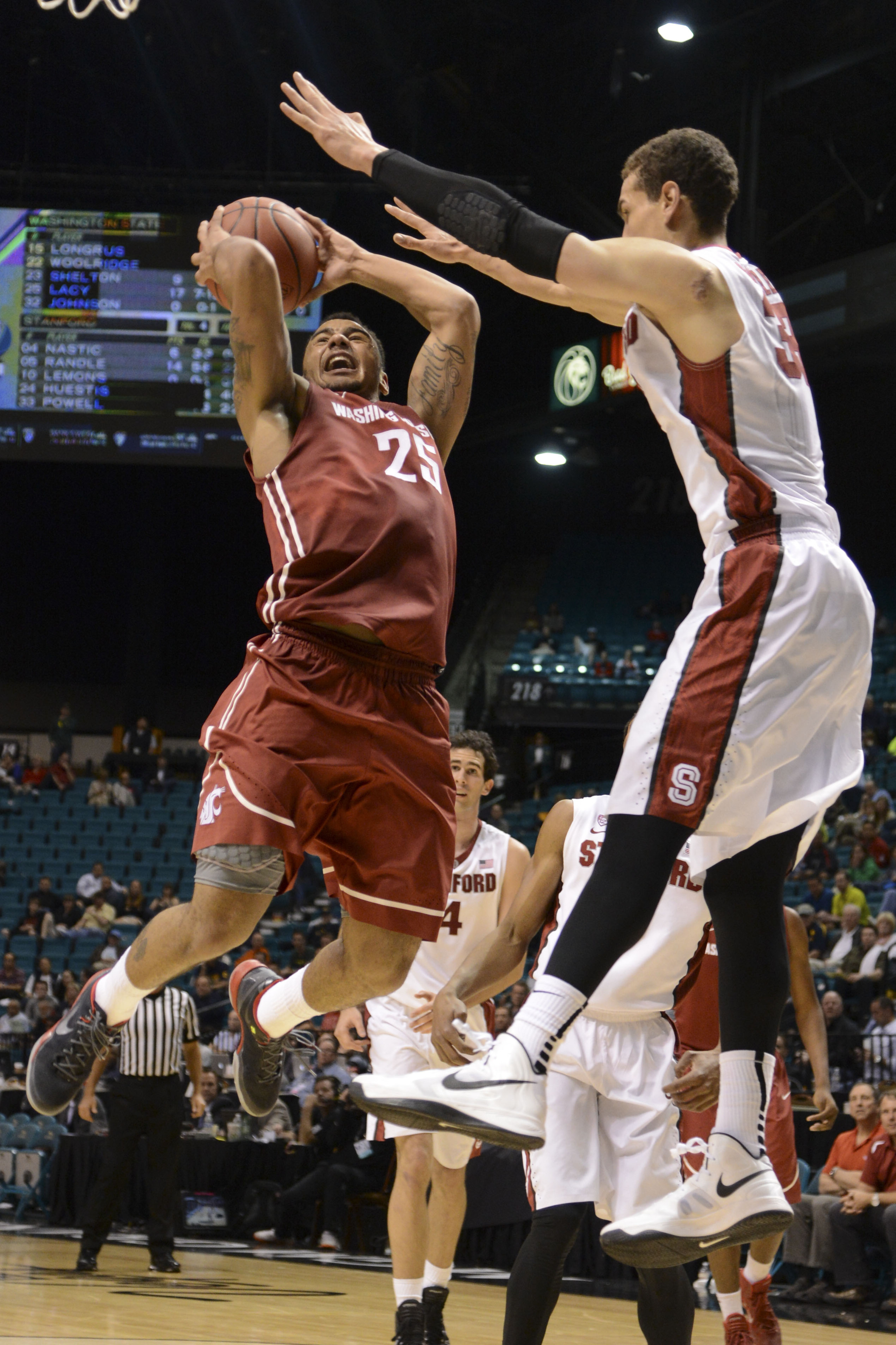 It should be clear why it didn't work. He started with a roster that didn't fit that mold, then never was able to recruit enough shooters, spent the past two years without a point guard or a competently shooting 4, and his players weren't good enough athletes to defend the way he wanted to defend.

In other words, his players did not make his system.

Why couldn't he get the players to make his "system" go? Because to do what he wanted to do, he had to recruit the same kinds of players Washington, Oregon, Oregon State, New Mexico, etc. were recruiting. How many of those battles is the coach at WSU going to win? Heck, Lorenzo Romar has had a tough enough time winning those battles lately.

Because of that, there just isn't enough talent on this team. (Explored briefly in this post.)

On the flip side, consider Tony Bennett's teams. Not too many of those guys had other major college options; Derrick Low did, and Taylor Rochestie probably could have transferred elsewhere after leaving Tulane. But most of the other guys were pretty famously off the radar of major programs. Yet, they produced some mind-boggling numbers (for WSU) on both ends of the floor, reaching as high as 9th in adjusted defensive efficiency and 33rd in adjusted offensive efficiency.

Were Tony Bennett's teams more "talented" than this year's WSU squad that finished in 11th place? That's a tricky question, right? In terms of athletic ability, the two teams probably are comparable. Bennett's teams had better shooters. Aron Baynes obviously is a better post player than anything we've currently got.

But was the gulf that big?

I think those teams were able to be successful because Bennett was able to both identify and successfully recruit players who could excel -- both mentally and physically -- within the demands of his rigid defensive and offensive schemes. Working together on both ends of the floor, they could use team concepts to become (cliche alert) greater than the sum of their parts.

Bennett didn't grab five guys off the street -- for goodness sakes, three of the guys he recruited to WSU have played in the NBA, including one guy who turned into a lottery pick -- and it's clear from what he's doing at Virginia that the guy is a superlative talent evaluator, so let's not get too crazy here. But he did successfully recruit a bunch of guys who had a lot more value to him than they did to Stanford, UCLA, Oregon or Washington.

And there is the key: The lack of demand for their services at other major conference schools made them available to Bennett and WSU. So when I say WSU needs a system guy, this is what I'm talking about. In current parlance, it's the Moneyball approach to recruiting.

If, for some reason, you still doubt the importance of recruiting in this, and still think it's all about the Xs and Os of the coach, consider what Moos said on his conference call yesterday after Bone's dismissal. Via Jacob Thorpe's transcript:

"I really think in the sport of men's basketball it's so much about recruiting and having good, good players," Moos said. "Here we're going into the field of 68 at the Big Dance and there are a heck of a lot more, in my opinion, a heck of a lot more teams that are in that tournament because of good players than because of good coaching and you get the combination of having both and you're going to find yourself in the Sweet 16.

"So I think one of the areas that really wasn't up to expectations was in the area of recruiting."

The question then becomes obvious: How to get recruiting up to expectations?

I think the answer is simple.

Moos should be looking for a coach who has a clearly defined philosophy that taps into an undervalued talent pool.

Is that another pack line coach? Maybe! But that's too narrow:

Note that I'm not necessarily advocating that Moos hire any of those guys (of course Martin is a pipe dream); I'm just pointing out how many different directions this thing could go. It could even be a coach who is a strong international recruiter (hello, Leon Rice and Randy Bennett). It could be something else!

Whoever the next coach is, he almost certainly must change the talent pool by having a strong philosophy to which he successfully recruits. Or he's got very little chance.

I suppose it's possible that the coach that comes in is such a strong recruiter, he can convince traditional players to play for him. Vince Grippi advocates for Kelvin Sampson, who did exactly that once before, luring coveted in-state players Mark Hendrickson and Tavares Mack to Pullman; I put Rodney Terry, who has sold some pretty good players on Fresno, in our coaching candidates list yesterday. Maybe a guy like one of those guys can succeed.

Look, I'm not saying it's impossible to succeed at WSU without a system, just that history has shown it's improbable. Think I'm being overly dramatic? Ken Bone basically admitted as much on the radio a couple of weeks ago:

"(Tony Bennett) and (his father) Dick came in here and they instilled a system that in time was effective those two years that Tony had were really, really good. The last year he had, it dropped off but he'd been here a few years already. The system was in place. And if he could have stayed here, I think there's a good chance they would have continued to have had good success."

There's another Bennett out there. We just might need to lift our eyes up and look around to find him.