Here’s how WSU basketball surprised us all

Most everyone thought the Cougs would be terrible. They’re not! Let’s talk about why.

Share All sharing options for: Here’s how WSU basketball surprised us all

Late Sunday night, the Washington State Cougars got to raise a trophy above their heads, an image that stood in stark contrast to not only most of the images we’ve grown used to in the Ernie Kent era, but also to the dire predictions bandied about by most prognosticators in the preseason — including, of course, yours truly.

How in the world did we get from “you’re probably only going to watch these guys because you’re a Coug and that’s what you do” to the Cougs rattling off six consecutive victories to start the season and receiving votes in the AP poll?

Here are the three biggest factors. 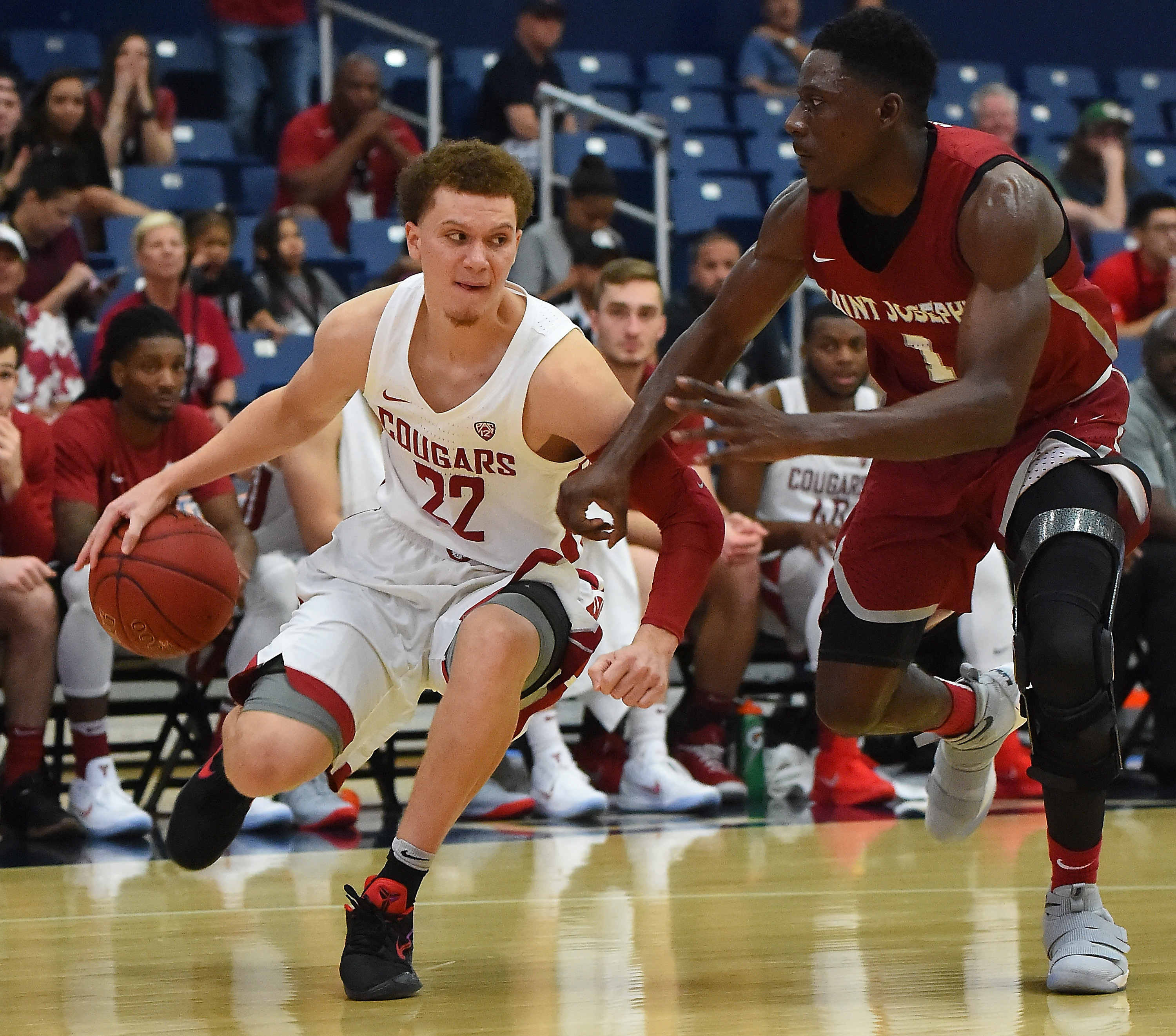 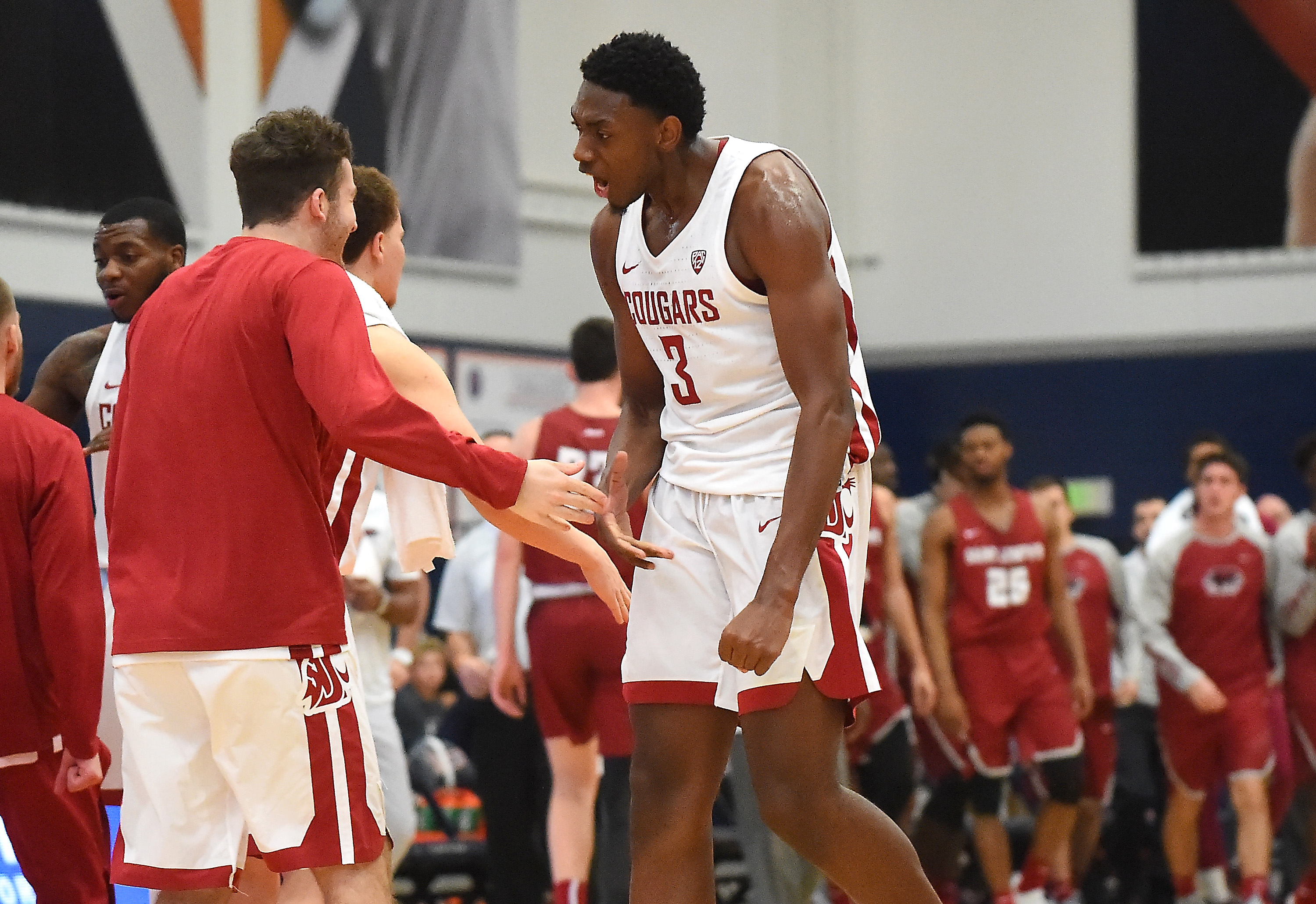 I’m not sure even the most optimistic forecaster could have predicted the production Ernie Kent is getting from his top two players, Malachi Flynn and Robert Franks. Yes, improvement was expected from the sophomore and junior, and yes, some might even have thought they could improve quite a bit.

However, what they’re currently doing goes well beyond improving “quite a bit.” They’re in the midst of a couple of the greatest single-season jumps you’re ever going to see. It’s not just that they’re playing really well; they’re playing like All-Pac-12 first teamers, basically carrying the team to this record with both their overall contributions and ability to hit shots in key moments.

Their traditional stat lines are great — Franks is averaging 18.5 points, 6.7 rebounds and 3.0 assists, while Flynn is averaging 17.7 points, 4.7 assists and 4.0 rebounds — but even that doesn’t really do them justice. Looking at a pair of “advanced” stats gives us some true insight into just how incredible each of them have been.

Usage and offensive rating answer two questions: How often is the player ending his team’s offensive possessions, and how often are those things positive? In general, the more a player “uses” possessions, the less efficient he is — the opportunities for mistakes, missed shots, etc. increases, something that should make intuitive sense.

So, when you can find a player who plays a lot of minutes who is both high usage and high efficiency?

When you can find two of them?

That’s what we’ve currently got with Flynn and Franks.

After six games, both are above 24 percent usage and 124 offensive rating. Those numbers almost certainly don’t mean much to you, but rather than getting way out into the weeds to explain it, I’ll just cut to the chase: both of those figures are high, and they rarely go together.

Besides that kind of heady company, what makes it even more incredible is just how unexpected it is. Last season, both Franks and Flynn posted offensive ratings of 94 — well below average. Again, not to get too far into the weeds, but that number represents an estimate of points created per 100 possessions. To improve roughly 30 points per 100 possessions while simultaneously escalating the rate at which the player is using those possessions is just mind-boggling and well outside the realm of what any reasonable person would forecast for any player — let alone a couple of guys who began their careers as nondescript 2- and 3-star recruits.

On a team that’s currently scoring 112 points per 100 possessions, to say Flynn and Franks are more or less carrying WSU’s offense to this hot start right now is not an exaggeration.

Of course, two guys can’t actually do it all by themselves. They’re getting a lot of help, too.

Early in the season, the Cougars’ offense appeared to be “shoot threes.” Like, at any time, from any point in the offense, regardless of the seeming quality of the shot. It looked ... bad.

But then it looked good! And maybe Kent knew something that we didn’t.

The Cougs are shooting threes on more than half their field goal attempts this season. Only six teams in the country have shot threes more frequently. And they aren’t just chucking them up: They’ve made 42 percent of their shots from beyond the arc, 26th nationally.

Franks and Flynn have done the most damage out there — they’re 32 of 78 combined (41 percent) — but it’s the supporting cast that has truly transformed the attack. Both Viont’e Daniels and junior college transfer Carter Skaggs are shooting better than 55 percent — FIFTY FIVE PERCENT — from beyond the arc on 53 combined attempts. Arinze Chidom has been only slightly below average, making 7-of-21, while Kwinton Hinson has made 3-of-7. In fact, it’s crazy to think what the team’s percentage would be without the poor shooting of Milan Acquaah, who is 5-of-22.

When Flynn and Franks are doing the kind of damage they are from all over the floor, having a bunch of guys around the perimeter who can make defenses pay for dedicating a little too much attention to those two guys is quite the weapon.

This has been a much-maligned area during Kent’s tenure at WSU. He didn’t come to Pullman with a stellar reputation for coaching this end of the floor, and nothing that happened over the past few years did much to contradict that — if anything, it was even worse than we expected.

This year, however, things have been better. Still not great, but better. Statistically, they’re ranked 177th in opponent-adjusted defensive efficiency by kenpom.com, but that’s even lower than what they actually are — at this point in the season, Pomeroy is still baking in some preseason projections, and the Cougs were projected to be very, very bad on defense (well into the 200s).

The length/atheticism combo on this team surpasses any of Kent’s previous editions at WSU, particularly on the perimeter. Last season, the Cougs featured a three-guard lineup that was 6-foot (Charles Callison), 6-1 (Flynn) and 6-2 (Ike Iroegbu) across. Now, it’s 6-1 (Flynn), 6-2 (Daniels) and 6-3 (Acquaah) with 6-4 (Hinson) coming off the bench. Daniels’ footspeed is his strong suit, and he’s springy; Acquaah’s strength and long arms are making him an incredibly versatile asset — so much so, that he’s continued to see time on the floor as he’s struggled offensively.

Then, up front, Kent has replaced a plodding center (Conor Clifford) and Josh Hawkinson with guys who are shorter — none are taller than 6-9 — but are much more active, in Franks, graduate transfer Drick Bernstine, Arinze Chidom (coming off a redshirt) and Jeff Pollard.

Beyond just having improved personnel, the Cougs just appear to have a better idea of what they’re trying to do. They’ve used a junky 1-3-1 at times with the 6-9 Chidom at the top, and it worked well against bad teams. But Saint Mary’s and San Diego State torched it, causing the Cougs to go back to the man-to-man and ... they played just fine!

Like we said for years in football, the Cougs would really be on to something if they could just get a non-terrible defense. It looks like we just might have that.

If you read all this and find yourself wondering if it’s sustainable, well, it’s probably not. At least, not in this current form. The paucity of comparables to what Flynn and Franks are doing should tell you how hard it is to sustain, and I don’t think anyone really thinks Skaggs and Daniels can keep shooting 55 percent from three.

That said ... who cares? This team is fun as heck right now, and they’ve already got three really good wins in their pocket that won’t ever be taken away from them. Besides, there are other areas that could improve to potentially offset any regression.

Just enjoy the ride for however long it lasts, people. Because you never know when it’s going to end.