Lots to love in this blowout win.

Share All sharing options for: Three Stars for WSU vs. Montana State

At some point soon, I’ll begin writing my Monday After column about the final football game, but before I get to that unfortunate result, I decided I wanted to write about the basketball team. Because, honestly, that’s more fun.

The Washington State Cougars cruised to their sixth victory in six tries on Friday — an 82-54 whipping of Montana State — and this one was different from the other ones in so many ways. The margin is the first thing that jumps out, obviously, but there was a lot of other stuff going on in this one that was very, very cool.

With Isaac Bonton missing the game with what the broadcast described as a bruised thigh, and with Tony Miller continuing to miss time with some sort of foot injury, and with Jaz Kunc returning from an injury of his own that caused him to miss the previous two games, Kyle Smith was left to rely primarily on freshmen and sophomores.

What they produced is the sort of thing that allows your mind to wander to all sorts of wonderful places, dreaming of what this core could become in a year or two: 1.17 points per possession on offense, yes, but also only 0.77 allowed on defense as sophomores Ryan Rapp and Noah Williams and freshmen Efe Abogidi and Andrej Jakimovski each played 30-plus minutes. Sophomore Vova Markovetskyy, who joined them in the starting lineup, also had 20 productive minutes.

Junior college transfer walk-on Myles Warren supported them with 20 solid minutes off the bench, while Kunc, the only other upperclassman, played just six minutes in his return.

This one was on the backs of the young guys, the guys who you’d have every right to expect to not be ready, to look lost, to look overwhelmed. Instead of wandering around wondering what to do without Bonton dominating the ball, they looked confident and poised.

It shouldn’t be totally surprising, given that basically the same group of guys fueled the surge against Portland State in the previous game. But it’s still awfully cool to see.

Broadcasters have all sorts of weird obsessions, many of which you can see me lamenting if you’re unfortunate enough to follow me on Twitter. I watch a lot of overseas soccer, so I get to hear a lot of different broadcasting styles, and one of the more distinct (and unfortunate) characteristics of American broadcasting is the need to build external narratives into games and then retrofit the game into those narratives rather than just, you know, talking about the game as it is.

For Greg Heister and Dan Dickau, their narrative of choice is the apparent desperate need for every team to “find” a second (or third ... or maybe even fourth??) consistent scorer to go along with whoever the team has designated as its high-volume shooter.

Well, maybe now they can shut up about it, because we’ve got Noah Williams.

Williams’ transformation was on full display in this one as he scored a career high 21. The jumper — which looks like it was rebuilt from the ground up, discarding the set shot for more lift and better footwork — was a versatile weapon as he hit a pair of 3s and even a couple of midrange shots. And while his 2-point percentage was only so-so, he also got himself to the line seven times, where he hit five of them.

Of course, he was also his dominant self on defense, drawing the assignment of shutting down Xavier Bishop. It’s not just that Bishop only scored 6 points, it’s that the 5-foot-8 guard could only even squeeze off 6 shots. Some of that was due to what I’m going to write about in the next section, but most of the credit goes to Williams, who draws the other team’s best scorer every night.

What he’s become is absolutely stunning, as his offensive game now matches the killer mentality he’s had all along. His offensive rating (a measure of efficiency in which 100 is average) is up to 106 — a 20 percent improvement from last season. I hoped for this by his junior year, to be honest. There will certainly be rough patches, particularly when he faces off against comparable athletes on the perimeter, but I see no reason why this isn’t here to stay.

Also, if you’re just now trying to start up a Noah Williams Fan Club, you’re way, way too late. Let me know if you’d like an application to join, though.

In case anyone is wondering, I've got dibs on the presidency of the Noah Williams fan club. 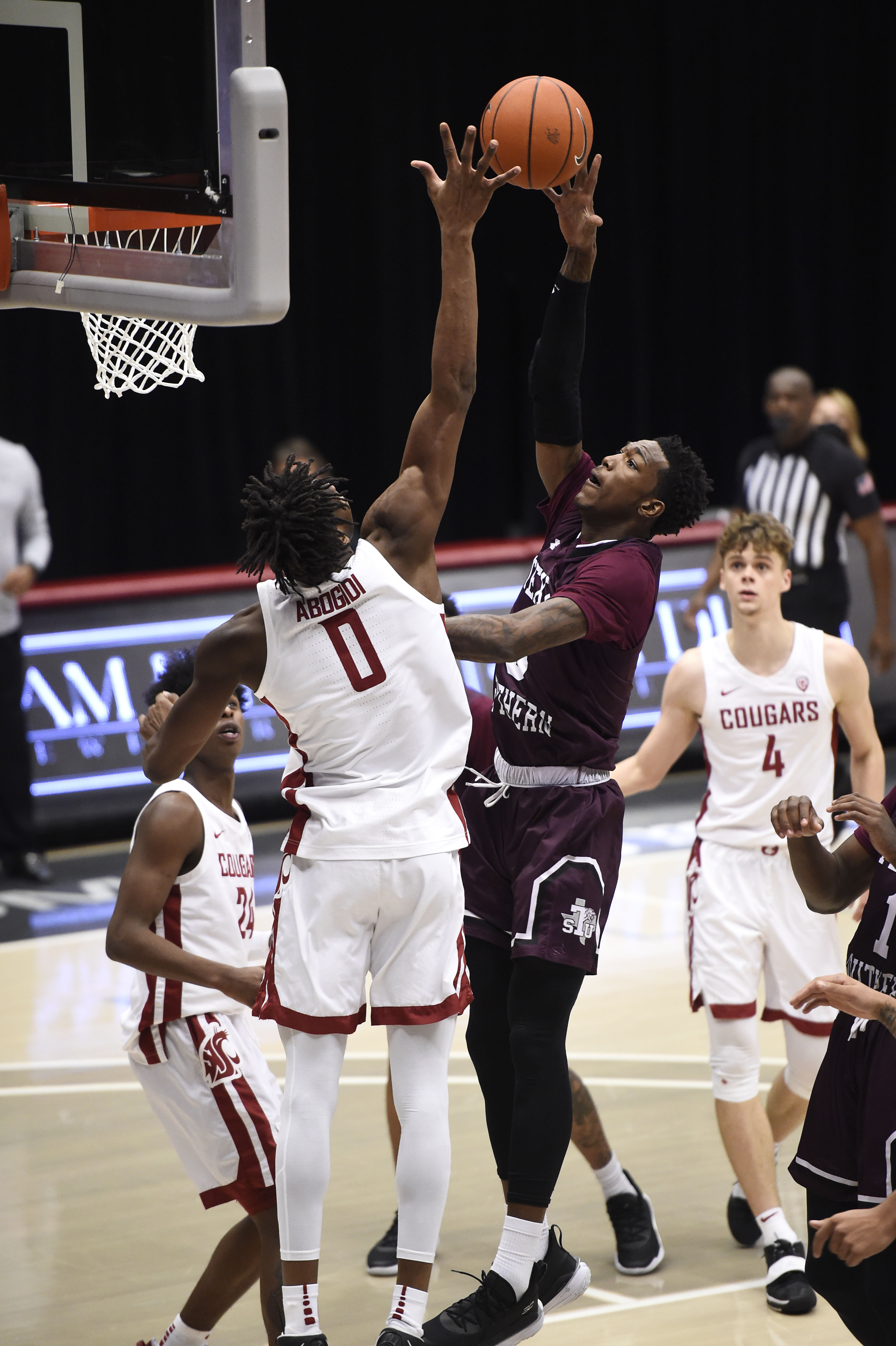 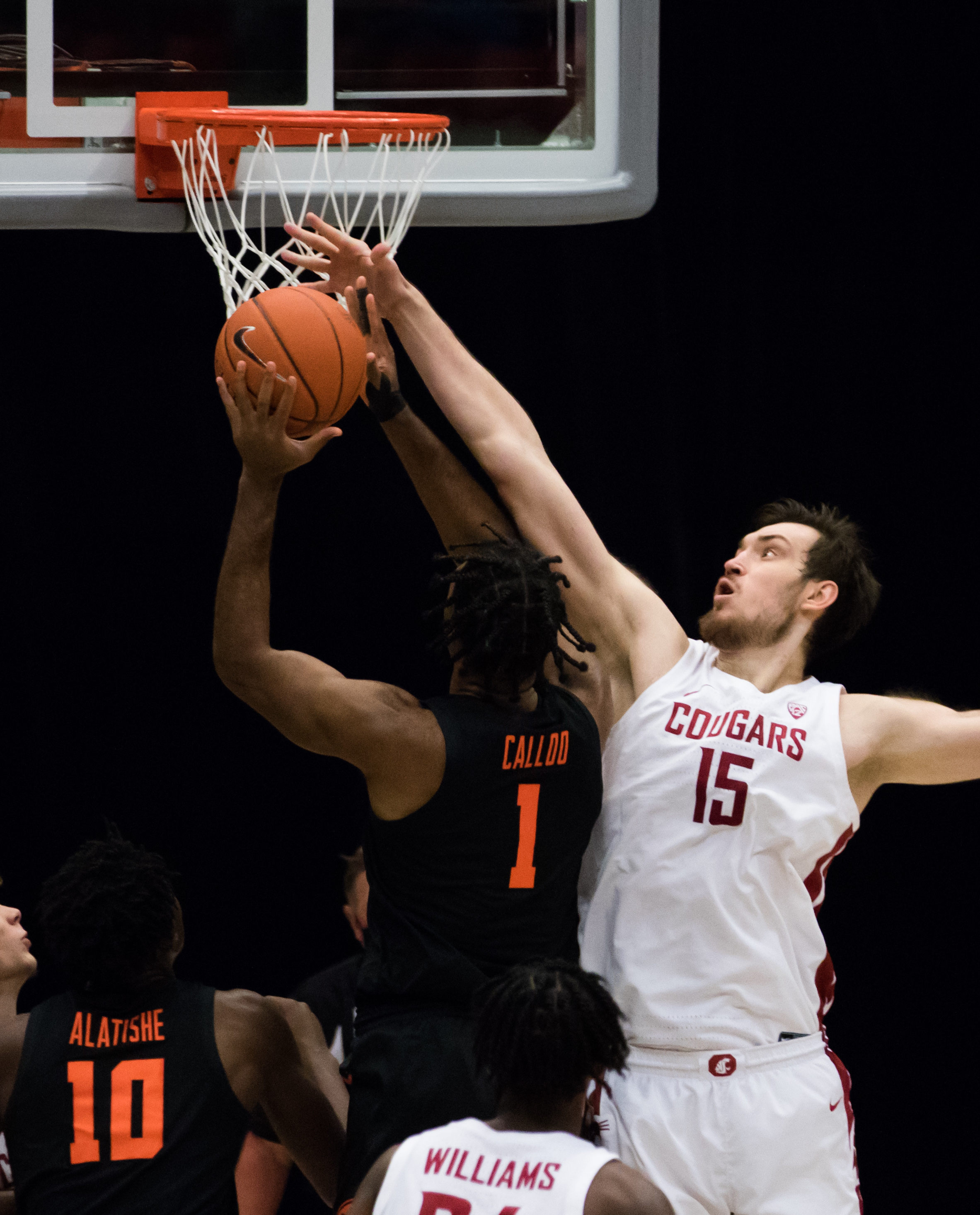 Until this point — both last year and this — Smith has preferred a smaller 4 to stretch the floor. For the first time all year, we got to see what we hoped for on the podcast: WSU pairing Abogidi and Markovetskyy in the lineup at the same time.

The results were glorious. Montana State shot just 27% on its 33 2-pointers, with four of those getting outright rejected, including one hilarious attempt on the baseline on which both Abogidi and Markovetskyy seemed to simultaneously block the shot. (I actually think Markovetskyy got the ball first.)

The biggest reason this has become possible is that Abogidi — who has always had the athleticism to guard people on the perimeter — has quickly reined in the foul problems that plagued him early.

The other reason this is now possible is that Dishon Jackson is healthy and contributing, giving WSU three legit big man options.