WSU vs Oregon: A look into the Oregon pass rush

Common thought has been the Cougs face a two and three-man pass rush, with the defense dropping eight or nine into pass coverage. We found some statistics from Saturday night's game that suggest that might not always be the case.

Share All sharing options for: WSU vs Oregon: A look into the Oregon pass rush

The Washington State Cougars made a game out of the first half, but eventually suffered a loss in the annual Seattle game to the No. 2 team in the nation. Oregon has a significantly more accomplished defense than WSU has seen recently -- Oregon is 18th in yards per play allowed -- and they were able to get pressure on WSU quarterback Connor Halliday all night. The Ducks sacked Halliday seven times, three courtesy of a blitz.

Some sportswriters have been under the impression WSU faces a two-man rush often, with the defense dropping nine into pass coverage. Comments like this haven't been uncommon in the Hot Cougar Action links this season;

"Oregon managed to pressure Halliday even with just a two-man rush at times, but when Washington State got close to the endzone, the Ducks ramped up the pressure and cause problems for the Cougars."

Oregon rushed the passer with two defensive lineman exactly once. Halliday narrowly avoided a safety and suffered a sack. On that play, the nose tackle didn't pass rush but sat at the line of scrimmage as a run spy. He wasn't utilized in pass coverage. 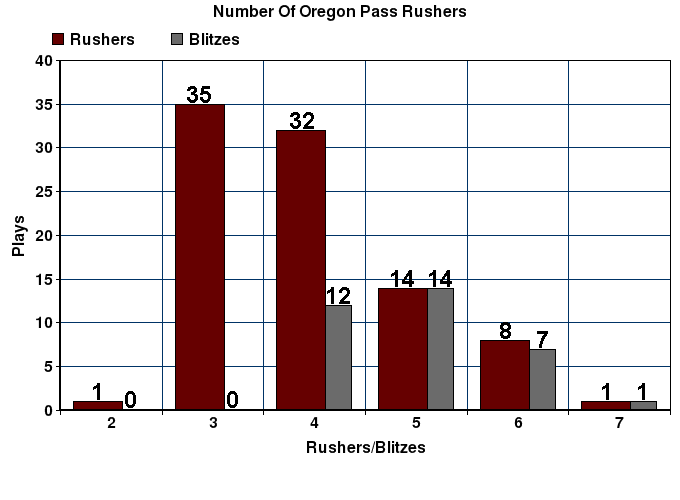 WSU ran 91 offensive plays and the Ducks primarily brought three and four man pressure. UO blitzed on 36.26 percent of the plays, bringing on average 4.9 pass rushers per blitz. A blitz was counted if a defensive player, not on the line of scrimmage, rushed the passer.

The Ducks were also in Cover 1 or man coverage significantly more than the Cougs have faced all year. The first four defenses played a lot of Cover 2 and Cover 4 zone (BYU was the most exotic in its coverage). The majority of the time, WSU QB's have been reading one of those two zone defenses, even on a blitz.

Oregon believed they could cover WSU wide receivers in man on a blitz, and the Cougs performed well enough against this defense (despite the sack total). UO sacked Halliday on three blitzes (eight percent success), forced 13 incompletions (39 percent success) and created 1 turnover. Halliday had decent production in the face of the blitz (10-for-24, four drops and one INT). He only made a couple of throws one could consider a "bad read" in under pressure. Going forward, it will be interesting to see if teams try to play man coverage or zone behind their blitz.

Another concern has been the Coug offensive line allowing pressure off a three-man pass rush. Of the Duck's seven sacks, two were a result of a three-man pass rush (2nd Quarter 3rd and 32; 3rd Quarter 4th and 8). While suffering sacks and allowing pressure by a three-man rush isn't ideal, the implications mean significantly less in a Mike Leach offense. Because of the wide splits, offensive lineman will be primarily blocking man on man during pass coverage with the exceptions being defensive line stunts, and blitzes. Whether or not there are two interior defensive lineman or just one, the offensive tackles will still be personally responsible for the outside speed rush by a defensive end.

Between the zone coverages seen earlier in the season and the varied coverage Oregon used Saturday night in CenturyLink, the Cougar offense has faced a lot more than a constant two-man or three-man pass rush. How upcoming teams choose to defend the Cougar Air Raid will continue to be something to look out for.