Finally, a big, beautiful metropolitan area with plenty to do before or after the football game. The Cougars soon travel to the Bay Area to face off against big, bad Stanford.

Share All sharing options for: Travelin' with the Cougs: Palo Alto, California 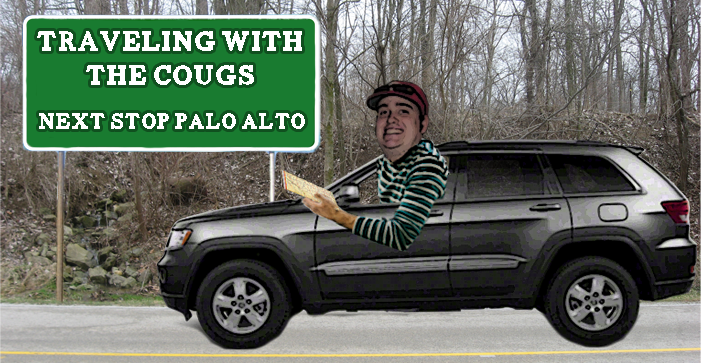 Traveling With The Cougs

So far this season it has been a sojourn. From the edge of the Wasatch to the deserts of Nevada to the lush Willamette Valley, we've run the gambit of environments to host a football game. Now, we've made our way to one of my favorite places on earth: The Bay Area. It consistently ranks as one of America's best places to live and other than mind bogglingly high gas prices and a summer temperatures in downtown San Francisco sometimes peaking in the mid-50s, it's a beautiful place to be.
The Washington State Cougars will travel to The Farm looking to upset the Cardinal. Stanford is still a big, physical, tough squad and although I subscribe to Lloyd Christmas' theory on chance, this is another road trip where the game looks out of reach. So it's a good thing you'll be in one of the most vibrant, diverse and fun areas on the planet.
Brief aside: Stanford University is actually in Stanford, California. HOWEVA there isn't much in the way of accommodations, restaurants or things to do, thusly the reason we are basing our search around Palo Alto.
One of the wonderful things about the Bay Area is that you have three, count 'em, THREE airports to pick from. Oakland typically has some cheaper flights but it's across the bay. San Francisco is the largest airport in the area with the most service from the major metro areas in the Pacific Northwest but for my money, San Jose is the best option. Parts of the airports have recently been remodeled and access to the freeway is easy.
Here's one nifty thing we haven't had yet in a city the Cougs visit: good, reliable public transportation! Pretty neat, huh? Just a quick walk from Stanford Stadium you'll find the Palo Alto Caltrain station which departs downtown San Francisco and points in between on an hourly basis every Saturday. Not only does this make getting to the stadium easier, it opens up our hotel options rather nicely. Which you'll be able to see in 5...4...3...you know, this isn't working for me. I really thought the countdown thing would be a lot cooler but this is being read so it just falls flat. And now I'm rambling. Great Michael, get back to the point.
Places To Stay

Don't let the look of a converted motel fool you because for one thing, it is. Once you get by that which will take all of 3 seconds, you'll see the complimentary wifi and hot breakfast every morning along with the well appointed rooms. Special 'zen' bonus: each parking space's barrier is a zen garden. I kid you not.

No false advertising here: there's actually a creek onsite. It's not the biggest thing in the world but hey, it's a creek! There's also complimentary afternoon wine available which might be the most Palo Alto thing I've ever heard of. There is a restaurant in house that also provides room service which is a nice perk in addition to the customary free wifi. The hotel also provides free shuttles to the area shopping centers just in case you decide to blow through your credit limit.

Just steps from Union Square, Market Street and Chinatown, Clift is an old world hotel with all the modern furnishings you need. It's distance from Stanford is negated by the Caltrain I mentioned earlier although it'll be a quick cab ride to the station. But the gorgeous setting of this hotel will more than make up for it. This is far and away the nicest hotel we've reviewed so far and it shows. The rooms are appointed for that Nigerian prince who keeps writing you for some bank account information. Room service will allow you to stuff your face around the clock in addition to the gorgeous bar downstairs. The biggest drawback here is you need to pay for internet but in the center of one of the largest cities in the country you should have plenty to do. Side note: the room comes with a sewing kit. So there's that.

This one is right next door to our second hotel suggestion. I'm a sucker for a good sandwich and the Bay Bridge Club with chicken, bacon, avocado and cheese sounds like it could hit the spot. They've got 39 sandwiches on the menu in addition to just putting all of their deli meats on a sandwich. They also possess the incredibly delicious dutch crunch bread which should be served with every meal. Seriously, even with ice cream.

In the heart of an up and coming district south of AT&T Park, Anchor Brewing Company makes some of the most delicious brews known to man. You can schedule a private tour and sample every last beer they're brewing after a 45 minute walk through the ancient building. I say ancient because by American standards something built in the 1930s is on the old side.

Finally, we get to the greatest place to eat grub we've talked about yet. Inside my mama's humble abode in Redwood City, she whips up the finest food this side of, well, anywhere. Swedish meatballs, 24-hour marinaded flank steak, chicken piccata, French onion soup, pork chop, lamb shanks, chili that cooks for hours on end, spinach salad and countless other mouth watering dishes. Just knock on her door, get a shopping list and bring her all the ingredients she needs and you'll never leave my mom's dining room table.

On the Pacific coast about 25 miles south of San Francisco, Half Moon Bay is a picturesque piece of land with beautiful beaches and plenty of touristy type places to fill an entire afternoon. Additionally, make your way to the Ritz Carlton for the best Manhatten you'll ever have.

Yes, it's an overly touristy thing to do but it's really cool. Other than the incredibly corny, good Lord do I hate my job way the guy docking the boat says "Welcome to the Rock." The tour takes a few hours and there's an inordinate amount of history even though the prison was only open for a few decades.

Just walking around this district will give your nose the greatest culinary adventure its ever had. There are dozens of fresh fruit and vegetable markets in addition to some of the more, em, out there stands. Please try and ignore the live turtles and fish for sale to take home for....pets! Yeah, that's it, pets! As you'd expect, there are tons of delicious restaurants featuring great Chinese cuisine at a great price.

And there you have it, in my opinion the best place you'll visit all year on a road trip to see the Cougs. The Bay Area is a place you could keep going back to and never see the same thing twice. There are dozens more places to eat and things to do than are in this space (the Presidio comes to mind) so take an extra day or two to hang around one of the best cities on earth.