Apple Cup 2012: An evening to remember

A 31-28 win for the Cougars and an Apple Cup to remember.

Share All sharing options for: Apple Cup 2012: An evening to remember

The Apple Cup was over. Late in the third quarter, after a string of Washington State possessions that went punt-fumble-interception-fumble, it was over. There was no way the Cougs were coming back. I'd seen this movie before and I knew how it ended.

Twists are pretty amazing, and they're why we keep watching movies and sports and pretty much anything. The best laid plans can go right out the window at the drop of the hat, and you never know what's around the corner. Even if every part of my brain said it was done, that chance -- slim as it seemed -- was still there.

The 18-point deficit turned into an 11-point deficit on the Cougars' first drive of the fourth quarter. The defense held and Jeff Tuel made a play that I should've just expected him to make by now. In something that reminded me of his first game -- that game against USC on the road, where he spent all night running for his life -- Tuel escaped pressure somehow, put both hands and the ball on the ground, looked up, and hit Isiah Myers for a big game. That play -- that one moment -- was like a switch flipping.

The 11-point deficit become a five-point deficit, which then became a three-point hole following the conversion. Two drives and two touchdowns in the fourth quarter. There was life in the stadium after it felt like the wind was taken out of the crowd's sails. An energy and a buzz enveloped the crowd, and the volume built to a crescendo as the Washington State defense took the field.

And just like that, it was Washington State ball again, with only a field goal standing between the Cougars and a tie ballgame. But even as the Cougars drove and setup a 47-yard field goal by Andrew Furney to tie, I figured I knew how the story ended.

Don't lie: You expected Washington to drive the length of the field and score a touchdown to rip the Cougars' hearts out. We've seen this before. We know what it feels like. As the Washington offense rumbled down the field, it just felt like the game was all over. Either the Huskies were going to break a big play and score or they'd hit a field goal as time expired.

As Travis Coons stood over a 35-yard attempt, I could picture how it all would end. The field goal would split the uprights, Washington fans would pile out of their seats and onto the field in the east end zone, and that would be that.

Have you ever watched something happen in front of you, still believing it wasn't real? No, I'm not talking about the field goal. I'm talking about the WSU student section ripping metal benches from their concrete supports and crowd-surfing them up to the top of the stands. This really happened, and it was surreal to see.

Kidding aside, I figured there would be a flag or something on the field as Coons' field goal attempt sailed wide right. It never had a chance, and the sound in the stadium was something to behold. A wall of noise, a sea of people moving and gyrating, a cannon blasting in the background. They shot the cannon off. I can't make this up. It felt like the game was over, even if overtime was ahead.

One of the greatest joys of watching football is seeing a fat man carrying the ball. It's out of place, out of the ordinary. Large men with large numbers on their jerseys aren't supposed to have the football in their hands. If they do, something has gone horribly wrong and horribly right at the same time.

So there was Toni Pole clutching a football in his mitts, running like there was no tomorrow. He was running towards me, ahead of the pack after Keith Price inexplicably tried to dump off the football while being pressured. All I could yell was, "FAT GUY" while standing on the sidelines. That was it.

My how fitting it would've been if Pole had barreled into the end zone. He didn't, of course, but boy did he give it a run. A walkoff fat guy touchdown would've been the ultimate Apple Cup highlight. Still, the script was flipped, and a game that seemed to belong to Washington was in the Cougars grasp.

What followed came straight from the 2008 Apple Cup -- or Crapple Cup -- script. The Cougars made some headway on offense, then trotted out Andrew Furney for the game-winner on first down. I couldn't tell how close the field goal was, but the noise let me know it was good. That and the hoards of people spilling onto the field, emptying the stands and celebrating with their team.

I watched Xavier Cooper sprint through the tunnel as the crowd closed in on the field, only to emerge a few short minutes later with Travis Long's jersey, still on its hanger. I heard the chants of "Leach! Leach! Leach" and saw the crowds envelop him as he paused for a television interview. I smiled as Elson Floyd skipped out onto the field, high-fiving and shaking hands with students the whole way.

There was something special about this game, even if the season hasn't been so special. There was something cool about the sea of people mixing with the players, and all the handshakes and hugs. Even Alex Hoffman-Ellis got in on the action, smiling from ear-to-ear.

Around the 30-yard-line, after the trophy celebration, Joe Salave'a, Robert Barber and Xavier Cooper grabbed Butch and posed for a picture. It was like watching kids on Christmas, celebrating as they open the best present ever. All around, players and coaches were soaking in the moment, basking in the glow of the unexpected.

Leach and his staff can build off this feeling, this game. They can build off a team that fought back and kept swinging until the very end of the Apple Cup. They can bottle this up and take it forward into the offseason. And maybe someday they can look back on it as the point where everything clicked after a season of struggles.

On a personal note, this was it for me. The 2012 Apple Cup was my last game. I'll be moving to DC and my time covering Washington State games in person has come to a close. After three years of driving back and forth across the mountains, then living in Pullman, this was it. I couldn't ask for a better ending.

I've learned a lot from my time covering games and met a lot of fantastic people. From the players, coaches, media colleagues and WSU staff members, I've learned something from everyone. I've seen some bad football -- hell, a lot of bad football -- but it's the moments that come suddenly that make everything worth it.

Sports are amazing, and Friday night is another reason why. They played for Travis Long, doing so with the goal of handing him the trophy after the game. They played for the seniors, to send out guys who had been through so much on a high note. And they succeeded in improbable fashion.

What a way to go out. 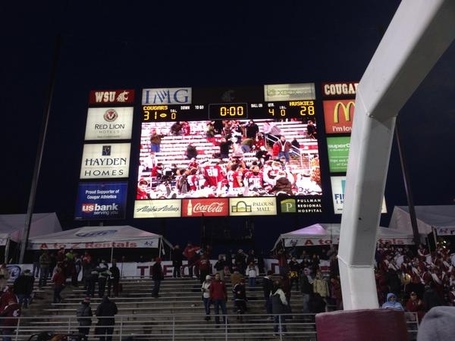