It might be painful to relive, but it can be helpful to understand how everything went sideways in this soul-crushing drive. Here's a play-by-play breakdown of what happened.

Last Saturday’s loss to the Colorado Buffaloes was disappointing (understatement). Some of you may have felt like the sky was falling and began to question why you were even riding the Cougar football ride.

While the big plays in the 4th quarter accounted for the majority of the Colorado offensive production and will be highlighted this week by Jeff Nusser and Brian Floyd, most fans in Martin stadium still believed the Cougars could hold on to a victory with a stop on the last drive. Instead, Colorado quarterback Jordan Webb called his own number at the goal line and ruined homecoming.

Before the drive ever started, Teondray Caldwell and the rest of the special teams answered a big play by the Buffaloes with a 54 yd kick-off return. Then, after a Cougar offensive effort that resulted in a loss of 2 yards, Andrew Furney trotted onto the field and piped a 42-yard field goal. Colorado returned the ensuing kick 20 yds to their own 30 yard line and began the drive that would obliterate most hopes for a Cougar bowl game (if those were still around to begin with).

Mike Leach said he wasn't surprised a team could get 3 yards on one individual down, in regards to the game winner surrendered by the Washington State defense with 11 seconds left on the clock. He felt a better question was how they went the other 70. To say Colorado put together an unstoppable drive would be a little gracious, as that drive was very stoppable ... just not for the Cougars on Saturday afternoon in front of a homecoming crowd and a national viewing audience.

The Buffs ran off tackle to the right with either a zone or counter more than half the time for an average 3.85 yds, and the quarterback completed just 2 passes: A bubble screen for 10 yards and quick throw to an uncovered wide receiver, during a substitution error by the Cougs, that went for 14 yards.

[Editor's note: this was less fun than a game winning break down]

Play: WSU lines up with the DEs outside shade of the end man on the line of scrimmage (LOS), in a "wide-9" technique. Two backers are in the box, with Cyrus Coen ready to take his center field drop. A "Tampa 2" coverage is similar to the traditional Cover 2 described in the previous breakdowns, except that a backer will fly to cover the middle center of the field. Both safeties continue to have deep half responsibility, but the backer looks to occupy the middle space around 15 yards that can be open in the traditional Cover 2.

The other backer, Eric Oertel (#21), lines up on the inside shade of middle receiver. The inside receiver (IR) is uncovered. Just before the snap Coen sprints to his deep middle. Casey Locker takes his normal Cover 2 drop. The wide receivers for CU block man on man and Locker has to close to make the tackle. Cornerback Daniel Simmons does his best to take on the block and force it inside, but Oertel is unable to shed his block in time to make a play. In this coverage, WSU only designates 2 guys to guard 3 WR until 15 yards downfield. 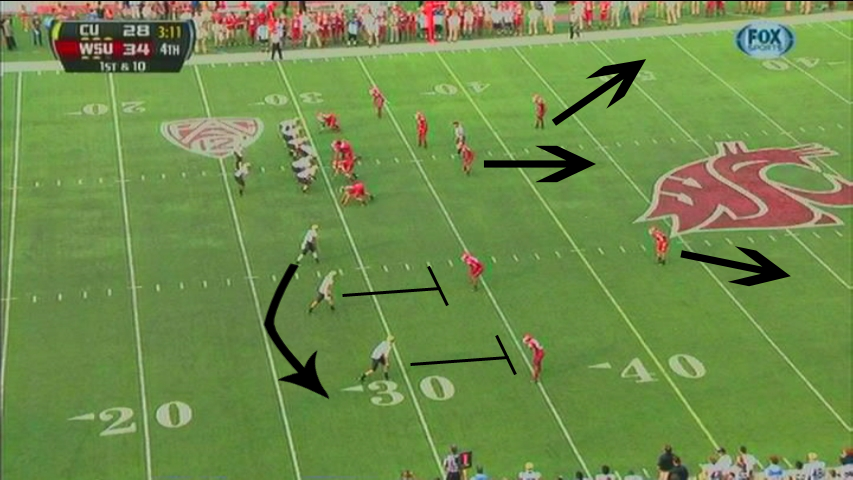 Play: Travis Long gets outside leverage and forces play inside. Palacio is at defensive tackle (DT), and gets driven outside by the offensive tackle (OT). The nose tackle (NT) does his best to blow up the exchange by pushing the center (C) into the backfield. The guard (G) helps with OT on Palacio, then pushes Oertel out of the play. Oertel over flows his gap responsibility then was beaten by the G.

Play: Chester Su'a brings pressure at the snap, while the rest of the defense drops normally. Colorado runs double slants on top, with a slant and out combination from the backside receiver and tight end (TE). Coen picks up the inside slant, then passes it off as it moves across his face, sitting in the passing lane for the outside slant. This play is designed to throw off the backside of the outside backer, right when he turns his hips with the inside slant. Coen does an excellent job playing his zone and gets a hand on the ball. 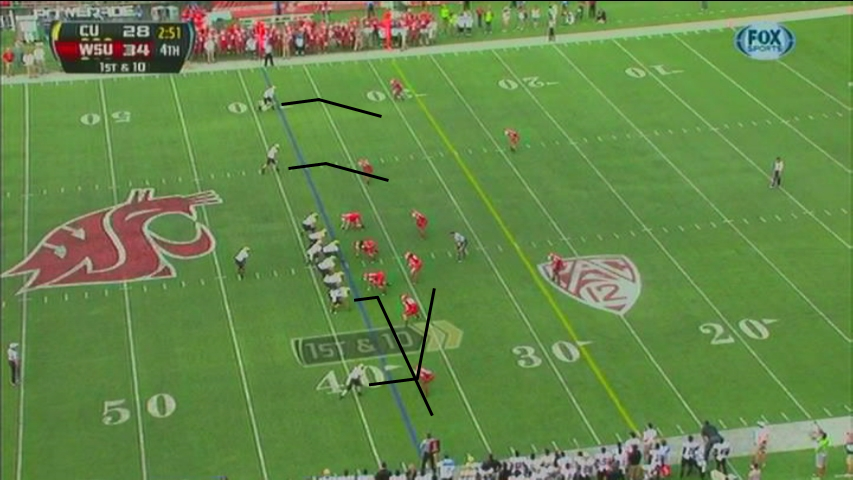 Play: WSU has only one backer (Su'a) in the box as it lines up in the Tampa 2, the other backer is 8 yds off ball, head up over the center for his middle zone drop. The CU line down blocks to the right. Su'a scrapes left, almost over flowing as the running back (RB) cuts up field, but recovers in time to make a diving tackle. 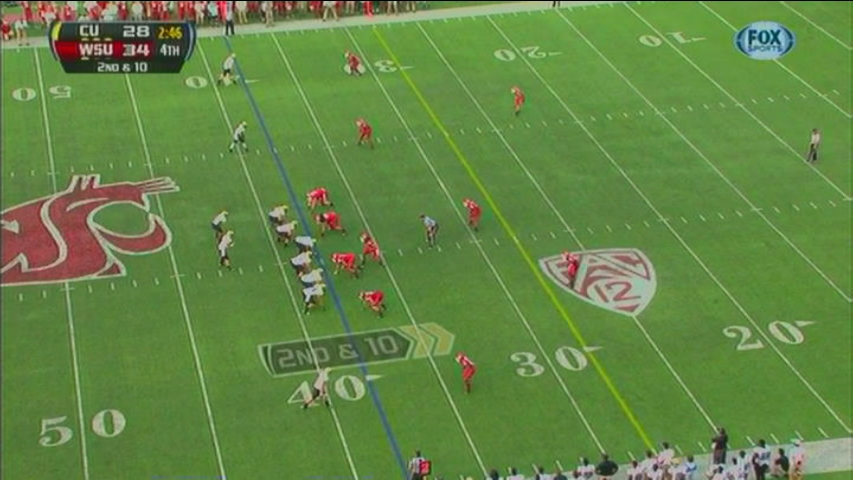 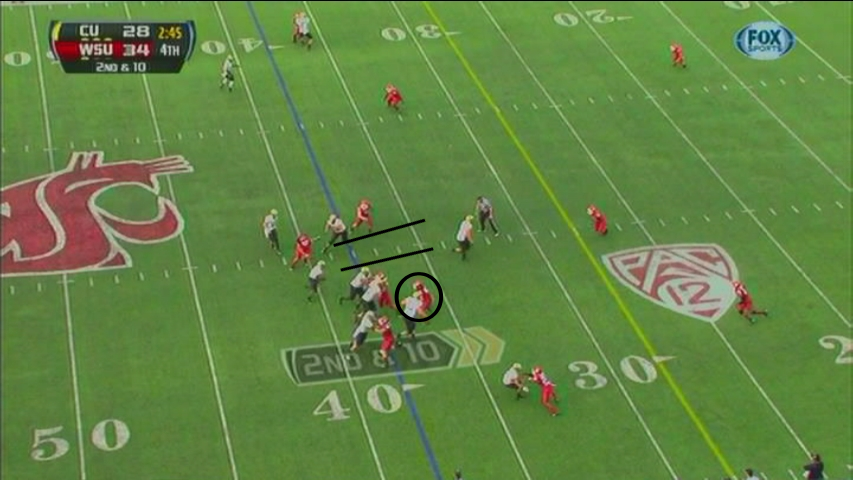 Play: WSU could have forced a 4th down on this play. Colorado had run the ball nicely, but the Cougar defense was doing well enough to make a stop. Travis Long was the only one paying any attention to the offense. Daniel Simmons (who wasn't alone in this) was more interested in yelling at the chaos than lining up over the WR, a responsibility that was probably independent of whatever change was going on. The WR is left uncovered along the sideline and Long makes a great effort to catch him. 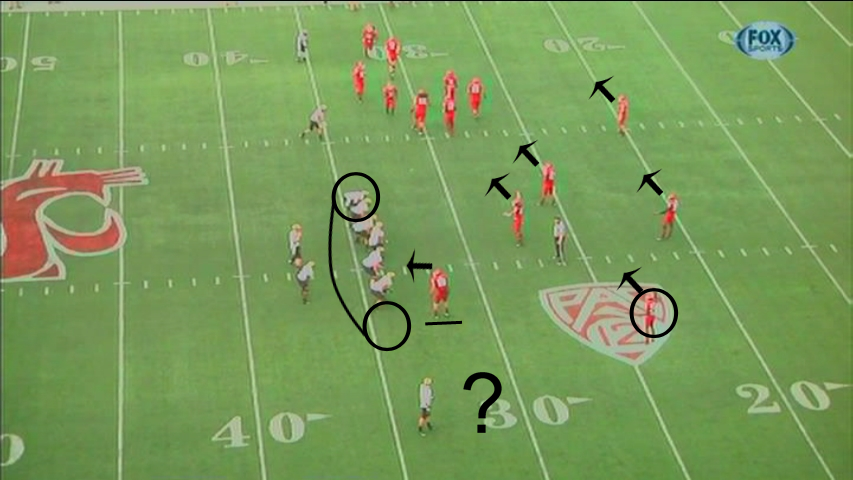 This was not a matter of "getting caught by a hurry up". That isn't what happened, CU had been running with about the same tempo all drive and actually took around 24 seconds to snap this ball. WSU thought there was a personnel change (there wasn't), when all Colorado did was move the TE from the right side of the line (Doubles) to the left side (Trey, TE on 2 receiver side). I can only guess the Cougar defense thought the Buffs had two TE.

The WSU defense had failed to correctly identify formation on multiple occasions during the game and lined up incorrectly. Coach Leach said this penalty didn't really hurt WSU, as it was declined by CU he is technically correct. However, the error did allow a 16 yd reception on a 3rd down that should've been stopped.

Play: Colorado attempts to run another bubble screen but the throw was bad and couldn't be caught. They down block on the line to sell the run fake, leaving DE Mathew Bock (#71) free to rush up field. He nearly gets to the throwing lane. 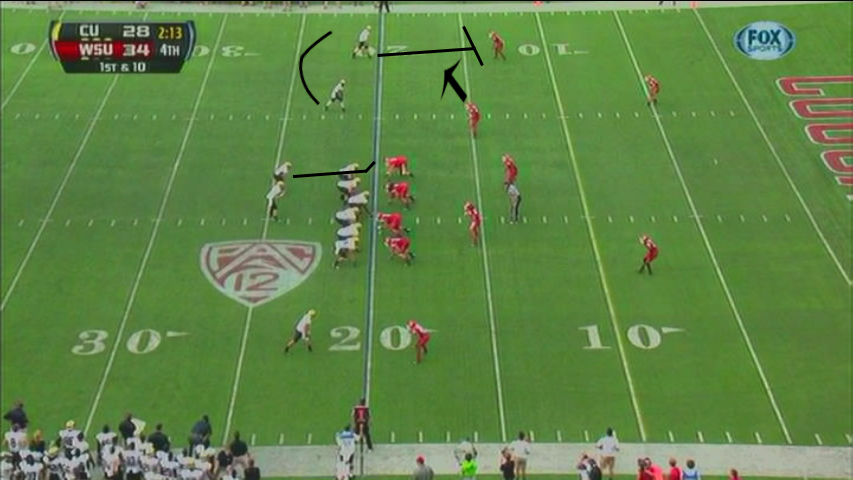 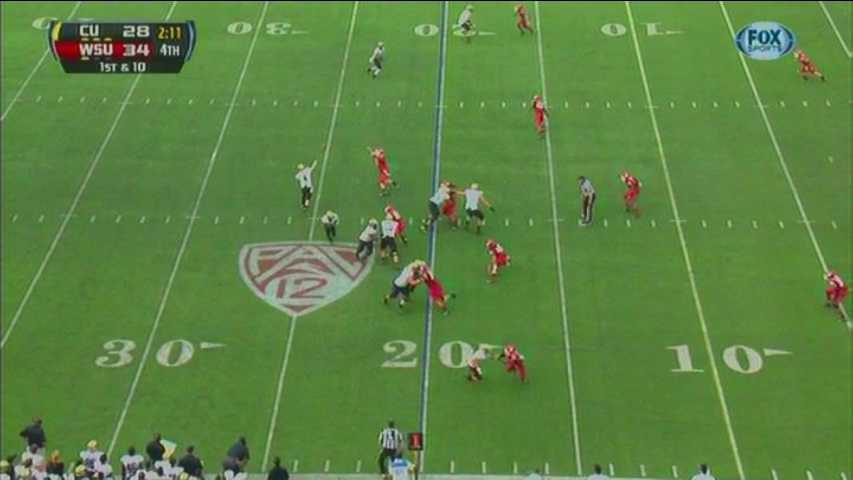 Play: Long lines up in between TE and OT, and rips inside. The right G and TE down block (left) while the C and OT pull as lead blockers. The OT takes on Simmons at corner, driving him out of the play. The C throws a nasty (legal) cut block at Su'a. Ione Gauta at NT gets pushed by the G on the down block, which Gauta tried to steer toward the run but was moved out of position. Oertel takes his centerfield drop for the Tampa 2 coverage and CU runs a bubble screen look with trips receivers up top. The LG leaves the double team on the DT and sprints at Oertel, diving at his knees and keeping him from filling the gap. Deone Bucannon fills from the safety position to make the tackle. 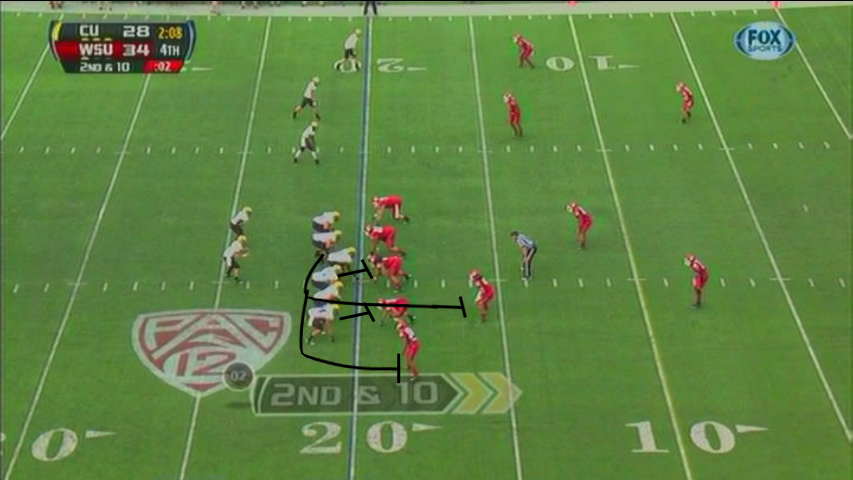 Play: The left G pulls and manages to block nobody. The Lead back goes to the outside and doesn't block anybody. Su'a scrapes to left and takes himself out, he has over-persued taking himself out of position twice on this drive. Darryl Monroe is handled by the right OT, taking on the outside shoulder of the block, turning the play inside but there isn't anyone to fill. Locker closes to make the tackle.

Play: CU runs the exact same play as they did on play 8, and from a different formation in play 7. This is the third time in a row WSU sees the counter run to the right. Bucannon is there to fill on his run blitz and causes a fumble. Darryl Monroe was incredibly close to regaining possession for the Cougs.

Play: Zone run right, instead of lead counter. The difference between a zone run and a counter run is what the offensive line does. In a counter, we see some lineman "pull" or drop and run behind the other offensive lineman who down block. In a zone run, everybody blocks somebody in front of them. This is where players really need to win individual battles. Monroe came out of the game after the battle over the loose ball, bringing Pullman native Jared Byers in to replace him. Byers starts off head up on the center and flows too hard over, almost taking the same line as Su'a, he is out of position without being blocked. 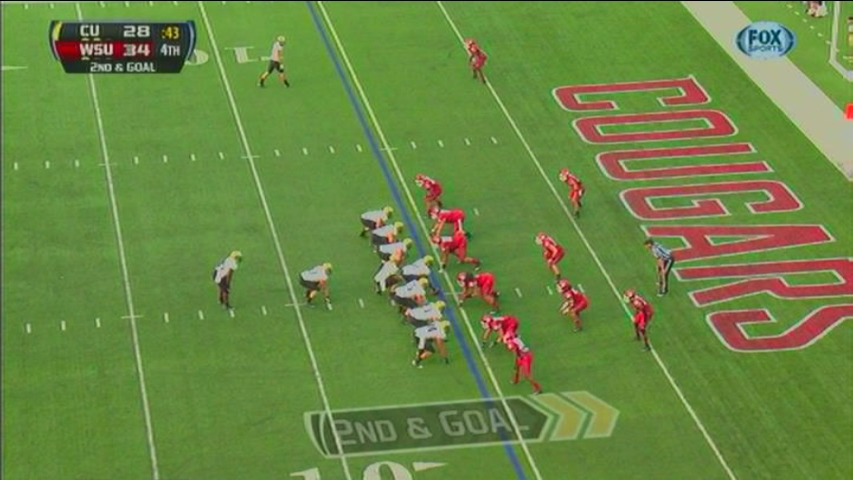 Play: Colorado again runs a zone play to the right. Xavier Cooper gets inside his block, and comes down the line for the tackle in the backfield. 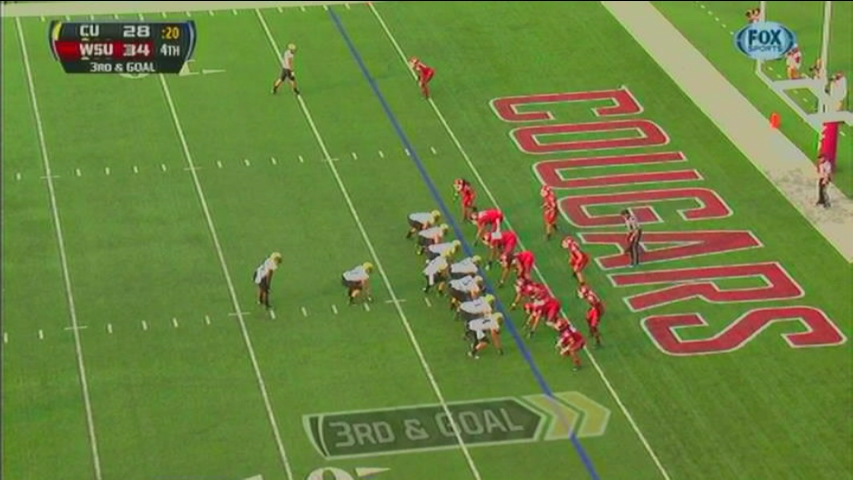 Play: This is most likely a misalignment by the defense and a perfect opportunity to use the last time out. Colorado empties the backfield with 5 WR. The first thing that's noticeable is that WSU uses 4 DBs to guard 3 WR at the top of the screen with both safeties on the same side of the field. Before the snap, Su'a (bottom) and Byers look to be waving at Locker, trying to signal there is another receiver. Locker is focused on playing man on the inside receiver up top. Su'a becomes de facto man coverage on the inside receiver at the bottom of the screen with Simmons covering the outside receiver. Byers is alone in the second level and has the sole run responsibility. 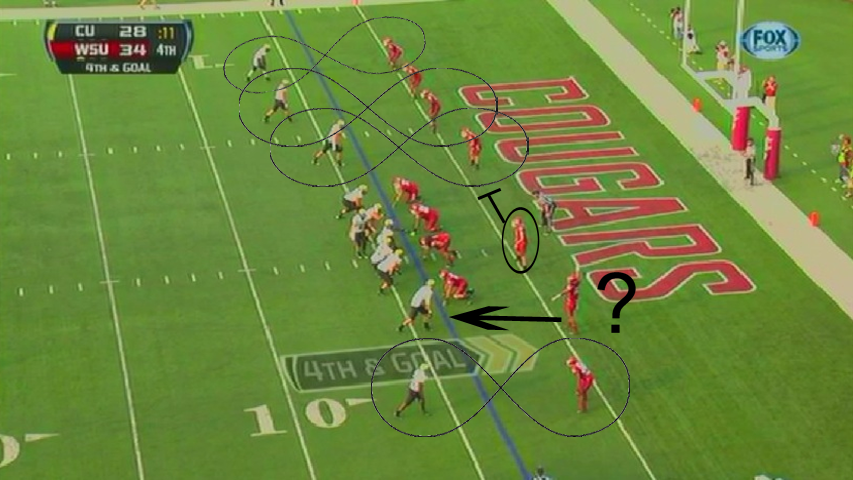 Colorado QB Jordan Webb recognizes the misalignment and audibles at the line to a designed QB draw. At the snap, both Bucannon and Locker turn their back to the play in man coverage. DE Matthew Bock (#71) rushes up field on the outside, creating a running lane. Byers doesn't move from his presnap position head up over the right OT and is eventually blocked by the center. Colorado took advantage of WSU's failure to line up correctly at the most critical moment in the game.

The Cougars' defensive woes can be centered around positioning. They either failed to recognize the offensive formation and lined up improperly or didn't flow with the play in correct positioning when they did. With much better opponents coming up that have more in their arsenal than run plays to the right, WSU needs to at least get themselves in the right position in order to even have a chance at making a play.