WSU Vs. Colorado: Why is the middle so wide open?

Share All sharing options for: WSU Vs. Colorado: Why is the middle so wide open?

Chances are you heard (or yelled) something similar to, "THEY'RE THROWING TO THE MIDDLE OF THE FIELD!!!!" last Saturday as the Cougars suddenly began to give up massive yardage to the Colorado Buffalo offense in the fourth quarter. It was easy for fans to see because the Buffs went to that inside route three consecutive times, immediately prior to a 70-yd touchdown given up on an inside seam. Four consecutive routes that attack the middle were called, with the last one going to the house and initiating a realistic comeback.

Earlier this week, Jeff Nusser broke down that 70-yd heartbreaker during his Inside The Play video. Let's take a look now at how the Buffaloes managed to exploit the middle of the Cougar defense just before it.

Colorado took over possession at their own 8-yardline after an interception of WSU quarterback Connor Halliday on 4th and 3. On the first play, the Cougs brought pressure with a backer straight up the middle. Logan Mayes (#83) got to Colorado quarterback Jordan Webb, forcing an illegal throwaway. Following the intentional grounding penalty, Colorado faced a 2nd and 15 from their own 3-yardline.

WSU would not blitz again this drive, opting to play a straight zone defense. They were not in a "prevent" defense. With an open route underneath, you can be lead to believe the defense was just retreating at the snap and surrendering the shallow field. The problems with the Cougar defense may be more concerning, as the inside receiver went legitimately uncovered for the majority of this drive and a few times again during the final drive of the game.

On 2nd down, Colorado lines up with 10 personnel (1 RB and no TE) in an Ace formation that has two receivers on either side (bottom receiver is off screen). This is a formation the Cougar defense should be very accustomed to, as it is a favorite of Mike Leach and his offense. 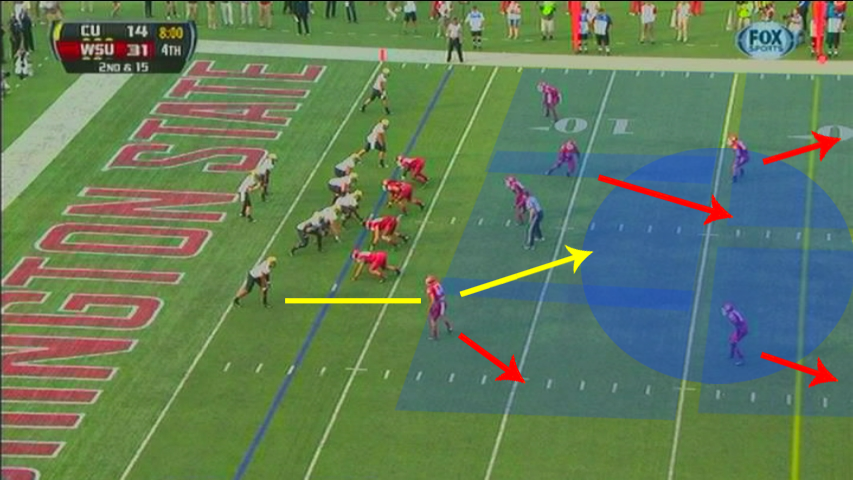 WSU counters with a 4-3 alignment and their Tampa 2 style defensive coverage. In a Tampa 2, the corners will squat in their flats, the safeties have their deep halves and two backers will have outside "hook to curl" responsibility. This is the same for Cover 2. The difference is that one of the backers will fly to the deep middle of the field, trying to guard against the open space in front of the two dropping safeties (who are also angling toward the sideline). 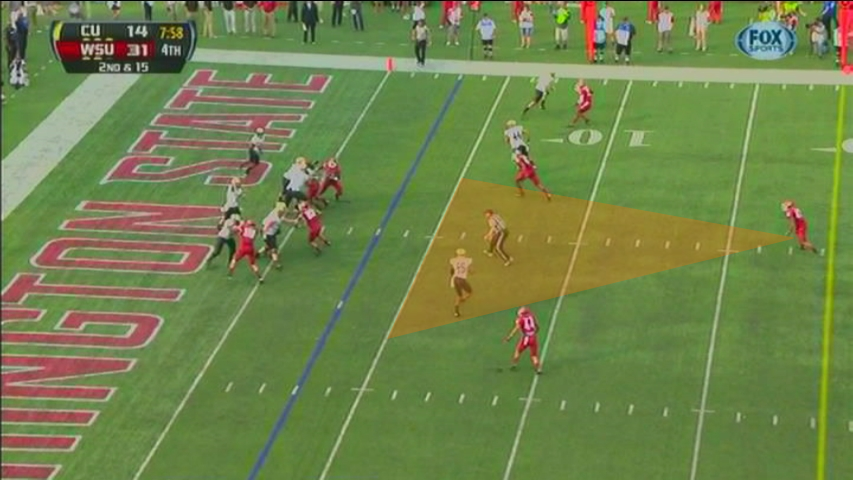 WSU assigns that responsibility to Cyrus Coen (#42) at WIL (weakside backer, top). Teams can key the strong side and weak side of an offense differently and can change the priority (what they key) situationally; short side vs. wide side, side with most receivers, side with the tight end, the side the running back RB lines up on, or play calling can all be used as keys. For WSU, Travis Long will typically line up on what they've keyed as the strong side of the field. This identifies Coen as the WIL and Tana Pritchard (#44) as the SAM (strongside backer, bottom), with Darryl Monroe (#13) as the MIK (middle backer).

The inside receiver No. 85 was more or less unguarded until 15 yards downfield and there could be a couple explanations for that. First one being that Pritchard may have needed to put hands on him. A wide receiver cannot usually run across the face of a backer without getting his route adjusted somewhat, which is legal within five yards.

Second, Coen could've been too deep with his zone and/or too early to get there. The drop usually occurs with the snap, so as not to give it away. Coen was a little early in his timing and perhaps ended up just a little too deep, a little too fast.

Following the completion for 14 yards, Colorado lines up on the left hash for 3rd and 2 in the same Ace formation. They hurry their pace a little, but WSU manages to be in position for the snap. The Cougars show a 4-3 look, but the secondary is a little harder to read. At the bottom, safety Deone Bucannon lines up in centerfield and takes a deep straight drop. Up top, safety Casey Locker looks manned up on the inside receiver and tries to close on his 5-yard out, while the corner turns and runs with his man down the sideline. This could be a man coverage with one free safety (Bucannon), or WSU could be playing man up top with a zone look to the bottom.

Pritchard is again outside shade of the inside receiver (No. 85) on the bottom. At the snap, neither Monroe nor Coen move. They don't drop into coverage, or slide anywhere. It's impossible to tell if they were told to focus exclusively on the run, but this would suggest they were. Except Pritchard continues to play it like he expects someone dropped in the middle zone (rather than man coverage), again allowing No. 85 to run across his face to the middle of the field and make the catch 10 yards past the line of scrimmage. WSU deployed two very different defensive strategies that apparently have the same weakness. 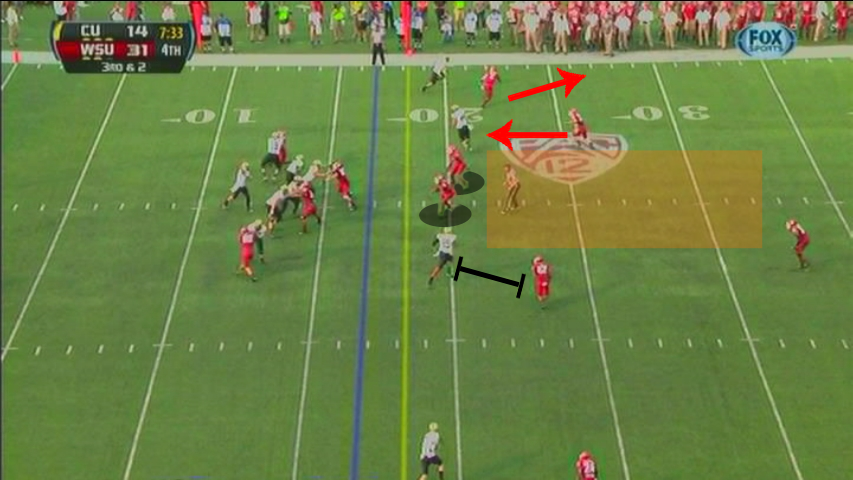 The completion moved the chains and set the Buffaloes up on their own 30. Colorado moves one receiver to the right side, giving a Trips look at the bottom with a single receiver up top. Pritchard lines up on the inside shade of the middle receiver, Monroe is head up on the center and Coen is back at seven yards off the line of scrimmage. The safeties and corners are giving a Cover 2 look. 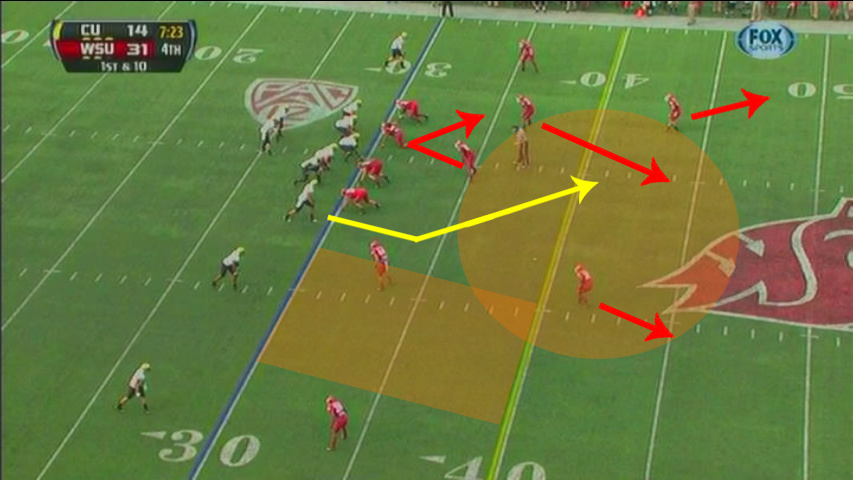 With the snap, Monroe feints blitz then retreats to four yards and Coen sprints back for his Tampa 2 drop. Pritchard hits the middle receiver and passes him off, squatting in his zone. The inside receiver (No. 44) is again unguarded and Coen is about 15 yards deep when the ball is thrown. This defensive tactic, as WSU is running it, has obvious issues covering the inside receiver. Monroe doesn't seem to be responsible for any passing zone, making Coen responsible for almost the entire field between the hashes and under 15 yards, not to mention receivers on the opposite side of the field.

We can't know if the faked blitz was called, or something Monroe decided to do himself but it effectively eliminated him from any pass coverage. Cougar fans have to ask; if you're going to exclude yourself from pass coverage, why not blitz for real? 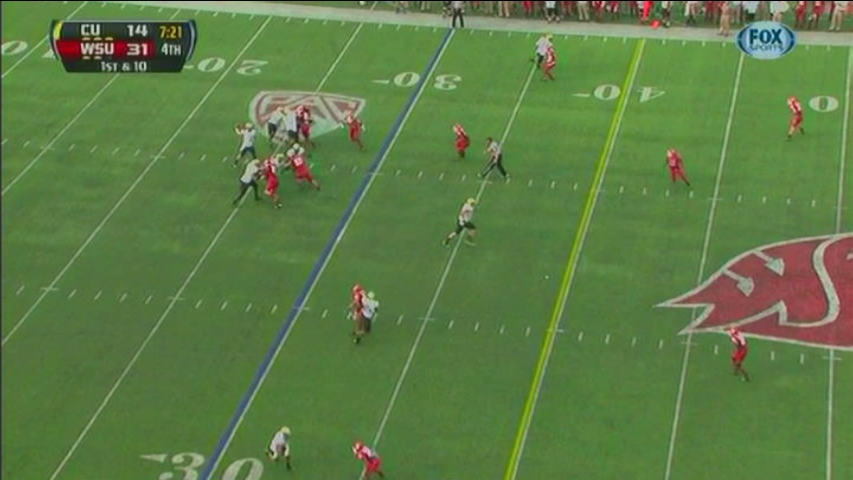 Colorado didn't connect with the open receiver, who looked surprised no one was around and wasn't looking for the ball. The in-game commentary informs us he is inexperienced on offense and used to be a defensive end. This man would burn the Cougs for a 70-yard touchdown on the very next play.

Jeff Nusser did an excellent job breaking down what happened on that long pass in his video (link at the top), and frankly I don't have the heart to relive it again here. The issues regarding the middle passes leading up to that 70-yard touchdown were, like the problems during the game winning drive by CU, centered around positioning. No one took responsibility for the inside receiver, leaving him functionally open for 15 yards in the center of the defense.

Washington State will need to understand their defensive responsibilities and be able to identify receivers at a minimum, to even have a shot at guarding a potent Oregon offense. The Ducks will send guys flying all over the field, and if they watched tape from last week against CU (they did), some will definitely be looking for the soft spots in the middle.