We know the Cougs are better, but how much better? We take a look at what some of the laptops of the number crunchers say.

WSU is off to its best start since 2006, which not-so-coincidentally was the last time the Cougs finished a season with a non-losing record. And, as you know, the four wins in the first six games already exceeds last year's total.

Obviously, the team is better. Much better!

But it can be difficult to quantify the change in quality of a team from year to year. That doesn't stop SB Nation's Bill Connelly from trying, though. Connelly, who runs Football Study Hall and contributes to Football Outsiders, is the inventor/purveyor of S&P+, an opponent-adjusted metric that rates teams using play-by-play data. When his metric is combined with Brian Fremeau's FEI -- also an opponent-adjusted metric, but it's based on drive data -- you get F/+, a well-rounded view of a team's strength.

If, like me, you're a fan of attempting to quantify things, the following graphs should interest you. I resisted doing this until this point in the season for a couple of reasons. First, the F/+ ratings initially include preseason projections, and the influence of those projections drops off as the season moves along. I would imagine there's very little (if any) projection element to the rankings at this point. Second, because of the opponent-adjusted nature of the metric, it takes some time for teams to become well connected for adjustment purposes. Halfway through the season, that should be happening well enough.

First graph! Here's how WSU has trended in its ranking according to F/+ since 2005, as far back as the metric goes: 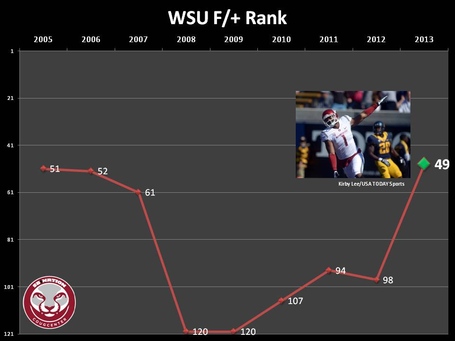 First things first: I will never get used to seeing WSU go from an ~average team to the worst team in FBS in one season. Now that we've got that out of the way, hey, we're No. 49! It's easily the highest WSU has been ranked in F/+ since 2007, and validates the idea that this team isn't just improved, it's vastly improved. That wasn't actually the case back in 2011, the last time we thought this program might be turning a corner; the Cougs were rated fairly low throughout that season, as the system proved to be rightly unimpressed by the victories over Idaho State, UNLV and Colorado, who all proved to be horrible teams.

But this year? The Cougs beating up the teams they should combined with the results against Auburn (narrow loss to F/+ No. 33) and USC (win over F/+ No. 27 - no, that isn't a typo) are impressing the metric.

Here's another perspective on the improvement. Teams are ranked in F/+ according to their relation to average -- their actual F/+ rating -- so a team that ranks, say, 90th one year might actually be a little better or worse than a team that was ranked 90th in another year. This is how WSU has been rated each year by F/+: 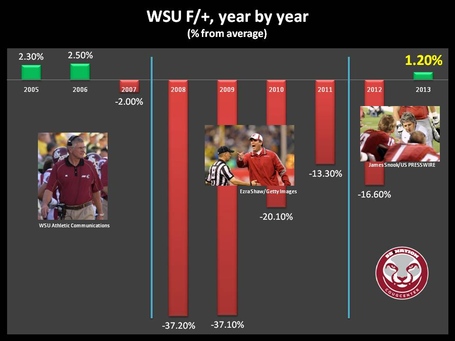 Again, my God, 2008 and 2009. But hey -- we're now above average! Ever so slightly! Hooray! The interesting thing here for me is that the amount WSU has improved from last year to this year is roughly the same amount the Cougs improved from the one-win 2009 debacle to the two-win 2010 season (~17 percent), yet that improvement only resulted in a 13-spot jump in the rankings vs. 49 spots now. Just in case you were wondering how bad it actually was back then!

Let's move to a bit more of the nitty gritty. At this point, I'm going to just post the S&P+ data, in both table and graph form, so you can get a sense of how that metric sees the change in the offense and defense, and then you can draw your own conclusions in the comments. I can't post FEI, because Fremeau isn't posting his individual offense and defense ratings until after this week's games. I'll add those later if you'd all like that.

(Note: If you don't know what standard and passing downs are, you can find the definitions here.)

And now, the graph. Smaller bars are better: 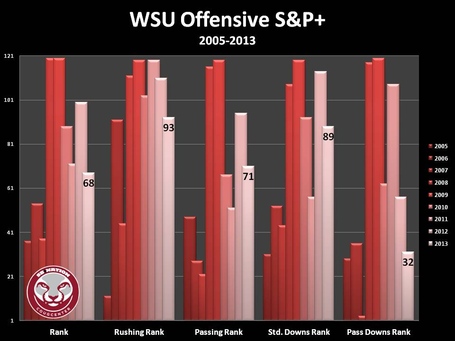 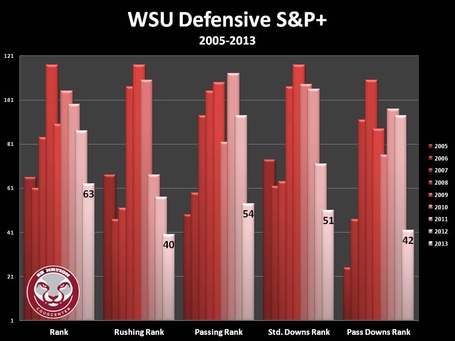 One last thing. FEI does present an interesting projection by calculating how many FBS wins the system would project for a team given its schedule and how many wins it would project over the remainder the schedule. It pays no mind to how many wins the team already has, only what it would expect given the peripheral numbers.

FEI says WSU should have 4.3 FBS wins at the end of the year, with 1.7 expected wins over the final six games, which is adjusted for the future opponents. In other words, this team is teetering between 5 and 6 wins ... which I think is what those of us who are rational already believe. Just food for thought.

What do you notice above?