In honor of Halloween, we take a look at the Cougars who scared people -- opponents and teammates alike.

Share All sharing options for: The scariest players in WSU football history

In the spirit of Halloween, Bruce Feldman of CBSSports.com -- a fan of the WSU program owing to his collaboration with Mike Leach on "Swing Your Sword" -- named WSU's own Deone Bucannon as one of the 10 scariest players in college football.

This is no shock to us.

It also got us thinking. How can we totally rip off this completely-cliche-yet-somehow-oddly-interesting idea and make it our own? Here are some lists we authors came up with after some email banter. Keep in mind, we're all relatively young, so we've only really got about the last 20 years covered. Before that ... well, the old timers who read the site are going to have to help us out by educating us in the comments.

Scariest Players If You're Holding A Ball

9. Deone Bucannon, S (2009-13) - See GIFs above. Most amazing? He's been able to continue to be an intimidating presence without running afoul of the new targeting rules.

8. Don Sasa, DT (1992-94) - Smallish as a defensive tackle (6-foot-4/281 pounds), Sasa used his quickness to get into the backfield for the Palouse Posse. No scarier thought for an offensive lineman than the possibility you might whiff.

7. Keith Millard, DT (1981-83) - I don't know a lot about Millard before his NFL career. What I do know is that he put together two of the top 10 tackle-for-loss seasons in school history as a sub-240-pound defensive tackle, and had a five-sack game to his credit. That's pretty scary!

6. Leon Bender, DT (1996-97) - The defense for the 1997 Pac-10 champs was rightly overshadowed by the offense, but given the way Ryan Leaf's NFL career turned out, there's a decent chance that we would have looked back at Bender as the best player from that team -- if not for his unfortunate death before he ever played a down for the Oakland Raiders. Bender possessed protypical size (6-5/308) but was shockingly quick, perhaps because he started out as a 225-pound end. Bender was unblockable at times and made the play against UCLA that made the Rose Bowl possible. Plus, the reflective visor was a nice scary touch.

5. Lamont Thompson, S (1997-2001) - Unlike Bucannon, Thompson wasn't known for big hits. Instead, he just intercepted pretty much anything thrown in his vicinity, racking up 24 career interceptions, a Pac-12 record. That's plenty scary for an opposing QB.

4. Rien Long, DT (2000-02) - Long had the most dominant single season of any interior lineman in the history of the school in 2002 when he won the Outland Award with 21.5 tackles for loss, including 13 sacks. He pretty much singlehandedly beat USC that year. For one season, Long might have been the single scariest defensive player in the conference. 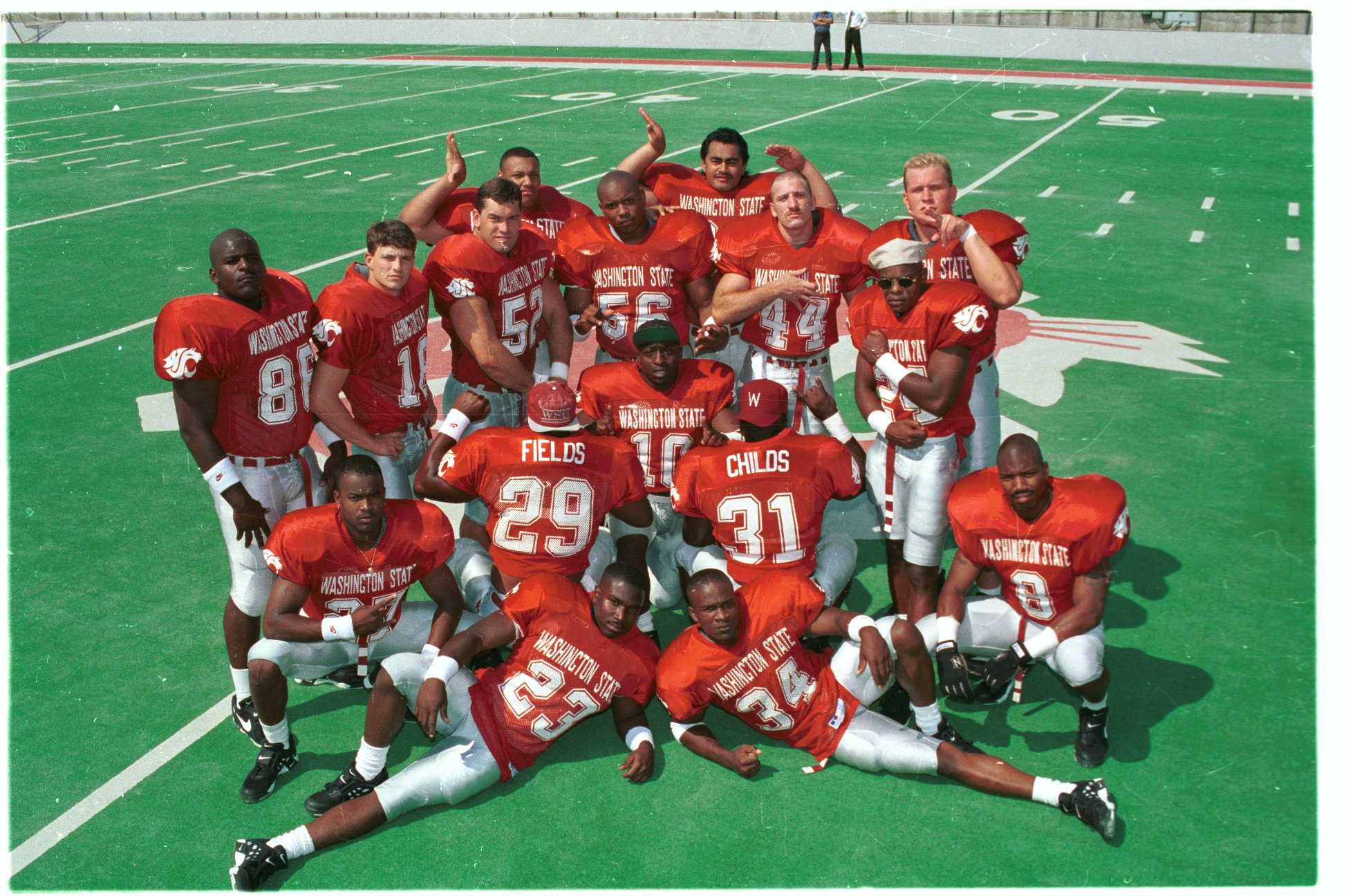 Yeah, there are a couple of guys on this list in this photo. But really, I just wanted a reason to use this photo of the Palouse Posse. (WSU Athletic Communications)

3. D.D. Acholonu and Isaac Brown, DE (2000-03) - Although Acholonu had the better career statistically, it's pretty much impossible for me to separate these two. It's one thing to have a dominant pass rusher to account for (as in No. 1 on this list), quite another to have two on opposite ends of the line. The pair combined for 55 career sacks, and I'm fairly certain that Chance Mock and Vince Young still have nightmares about being harassed by these two in the Holiday Bowl.

2. Mark Fields, LB (1992-94) - I don't remember watching Fields play all that much since the Cougs weren't on TV a whole lot back then, but what I do remember is that he was big and fast and if you had the ball he would hunt you down like the fugitive you were.

1. DeWayne Patterson, DE (1991-94) - Patterson compiled what we, the Playstation/Xbox generation, refer to as "video game numbers" while terrorizing opposing quarterbacks. In 2011, WSU had 17 sacks as a team. Patterson did that by himself in 11 games in 1993, which meant 1994 was quite the letdown with only 13.5 sacks. In terms of putting fear in opposing quarterbacks, nobody was scarier than Patterson with his 37.5 career sacks and 52.5 tackles for loss -- both WSU records.

Scariest Players With The Ball In their Hands 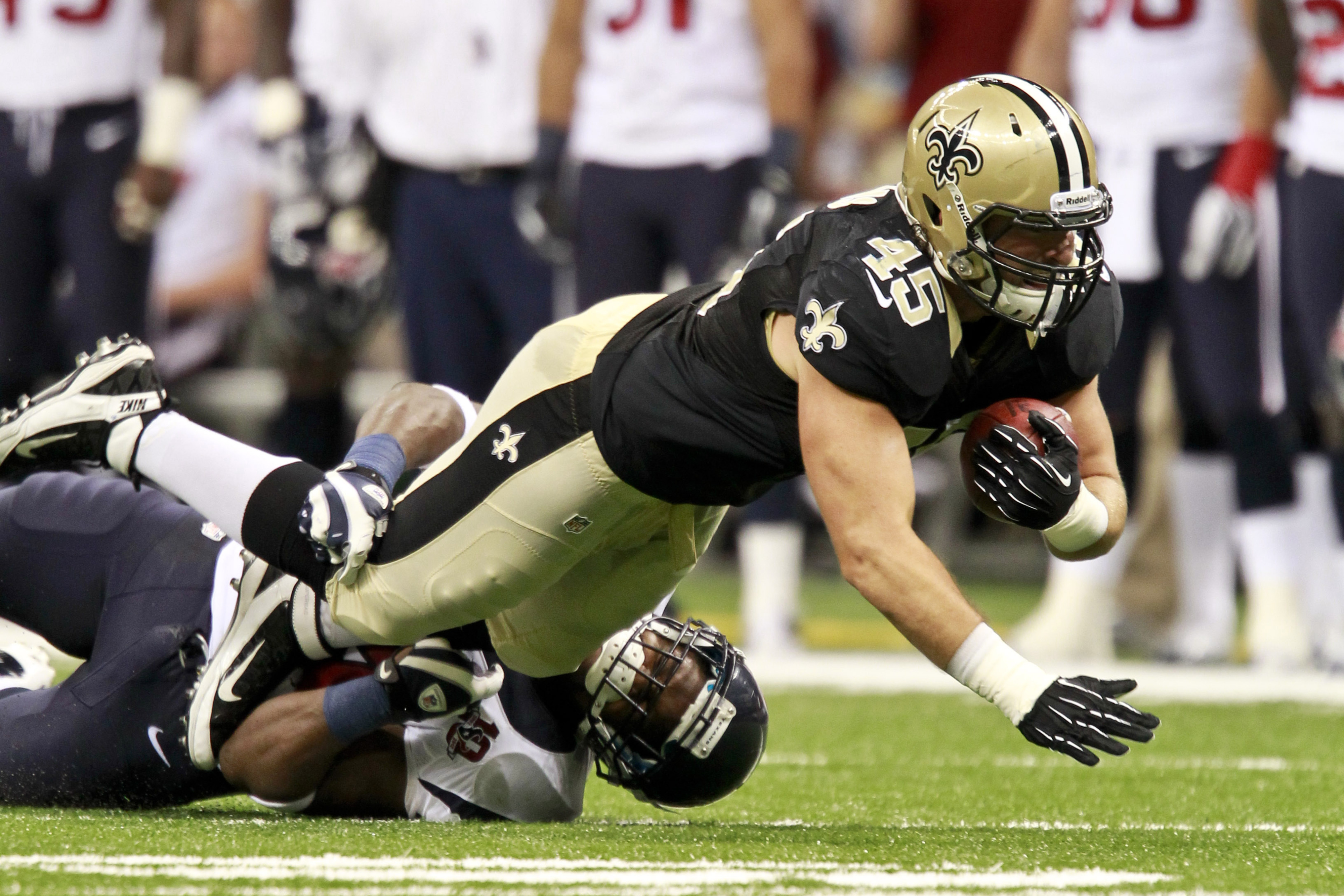 Before he was running over guys in the NFL, Jed Collins scared Pac-10 opponents. (Derick E. Hingle/US PRESSWIRE)

5. Jed Collins, TE (2004-07) - Better have brought your big boy pants if you wanted to tackle Jedzilla, because you were going to get hit. Hard. He certainly wasn't as explosive as the other guys on this list, but I've got a soft spot in my heart for guys who go right at defenders.

3. Rueben Mayes, RB (1982-85) - Everyone knows that Mayes set the NCAA single-game record for rushing yards with 357 against Oregon in 1984. But did you know that he had 216 yards the previous week at Stanford, for a combined two-week total of 573 yards (and seven TDs)? In the mid-1980s, there was no scarier running back in college football.

2. Ryan Leaf, QB (1995-97) - Before he was doing all the boneheaded things he would eventually become more well known for, Leaf was shredding opposing defenses. There was a lot of talk about the Fab Five back in 1997, but I'm here to tell you that Leaf made those guys. He was absolutely ridiculous. Running back Michael Black was very good in his own right, but opponents surely breathed a sigh of relief when Leaf handed the ball off instead of dropping back. He might have been the No. 2 pick in the NFL draft, but he was the best quarterback in college football that year.

1. Jerome Harrison, RB (2004-05) - The Ghost was a threat to take the ball to the house every time he touched the ball, and opposing defenses knew it. Every carry was a hold-your-breath moment, and his 1,900 rushing yards in 2005 is a WSU record that will stand for at least as long as Mike Leach is coach.

3. Chad Davis, QB (1994-1995) - If you ever watched the noodle-armed Davis throw a 10-yard out, you know exactly why he's on this list. Positively terrifying. You know it's really bad when John Keister gets a hold of you on Almost Live!

1. Menckebaum, QBs (1998-99) - The truth is that nobody could have lived up to the ridiculous standard set by Leaf. However, Steve Birnbaum and Paul Mencke did their best to make absolutely sure that Leaf's legacy remained intact. In 1998, the two combined to complete less than half of their passes with 22 interceptions and just 16 touchdowns as WSU became the first Pac-10 team to fall from first place to last place in consecutive years. The bummer part is that both were (and presumably still are) stellar dudes. Sorry guys! 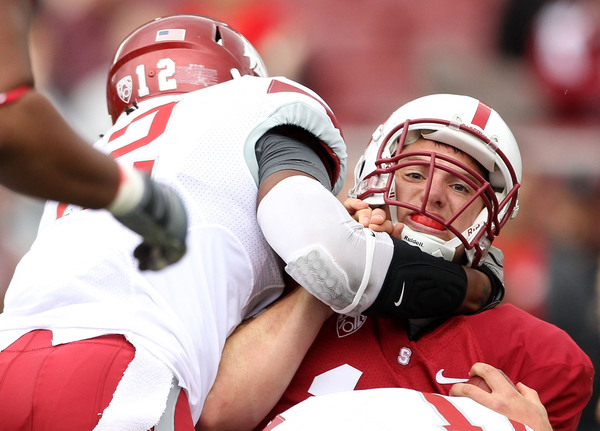 Too bad C.J. Mizell seemed to like to do this to people off the field, too. (Ezra Shaw/Getty Images)

2. Andy Roof, DL/OL (2005-06) - It wasn't enough to have a bunch of alcohol-related arrests; Roof had to drive his point home by head-butting a door man at a party, allegedly causing facial fractures, then allegedly fighting five guys who tried to remove him from the premises.

1. C.J. Mizell, LB (2010-11) - Remember how Mizell was a four-star recruit who ended up in Pullman at the last minute and we all were like "how did this guy fly under the radar?" He lost his scholarship offer to Florida State because of an alleged assault of one of his high school coaches. I've seen pictures of this alleged assault. Be glad you haven't.

Scariest Players With Instruments Of Destruction In Their Hands

2. Xavier Hicks, DB (2006-09) - As someone who wears contacts, I can tell you I think I'd rather be beaten to within an inch of my life than put contacts into my eyes that had been in rubbing alcohol. Yeeeeeow!