WSU vs. Arizona: Scouting the Wildcats

We preview the Arizona offense and defense the Cougs will face this upcoming weekend down in Tucson.

Share All sharing options for: WSU vs. Arizona: Scouting the Wildcats

Wazzu heads south to take on the Arizona Wildcats and their awful uniforms this Saturday. Second year coach Rich Rodriguez has his Hard Edge Wildcats bowl eligible and sitting at 3-3 in the Pac-12, and while they're virtually out of South Division title contention with losses to both USC and UCLA, the Wildcats are still in the running for a quality bowl.

Arizona's offense should seem a little familiar for Cougar fans -- it is very similar to what both Todd Graham runs at ASU and Gus Malzahn runs at Auburn. The three coaches have a somewhat intertwined coaching tree. Rodriguez actually gave Todd Graham his first Division 1 coaching job at West Virginia, and as head coach of Tulsa, Graham hired Malzahn to work with co-offensive coordinator Herb Hand, a Rodgriguez disciple. 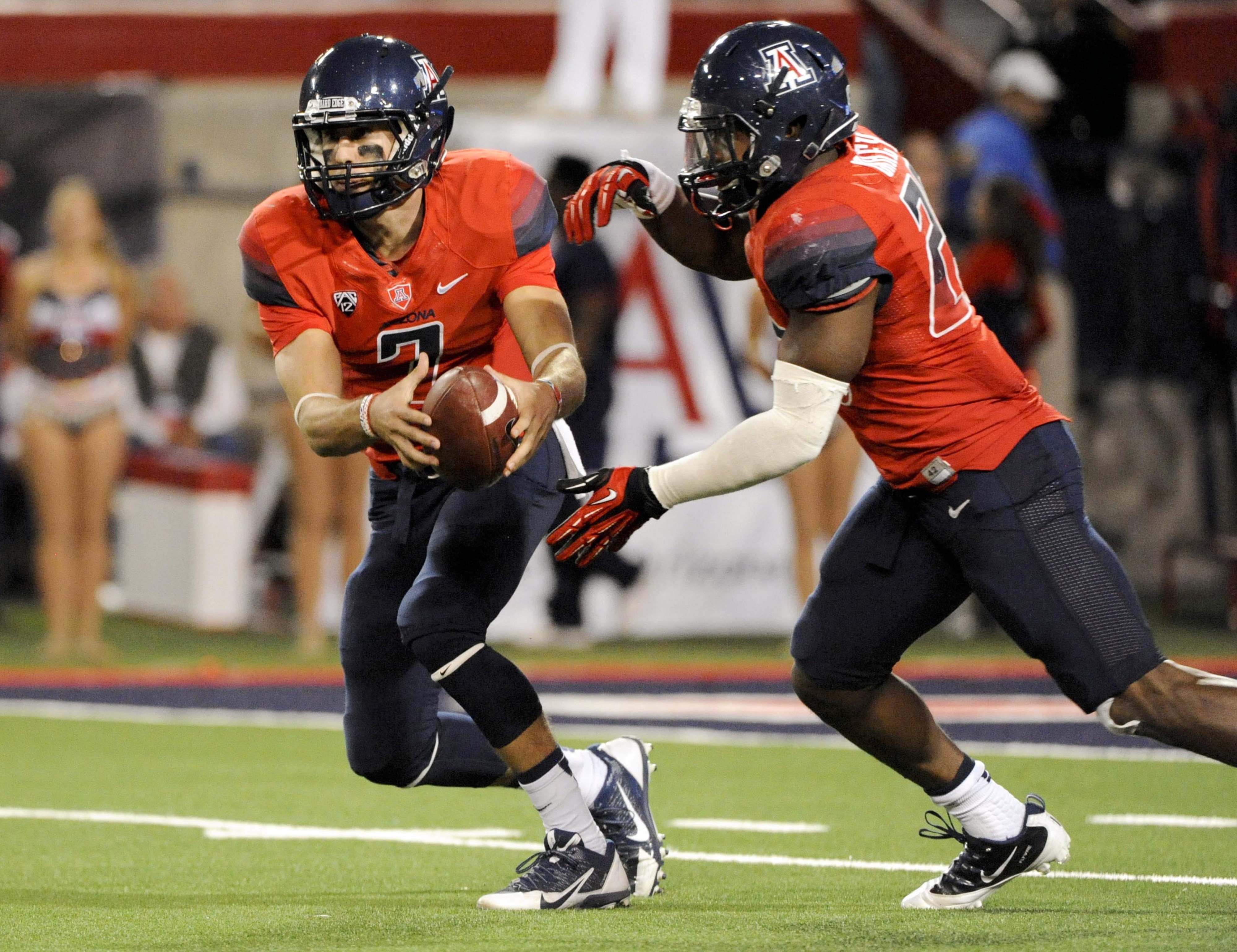 Offensively, Arizona spreads you out to run the ball. They will operate with four wide receiver sets, motion, and push the tempo all to get the defense out of alignment and attack with a zone read. And they have a hell of a running back. Ka'Deem Carey might very well be one of the top every-down backs in the nation. He already has 1,221 yards (5.65 yd/att) and 11 touchdowns. Quarterback B.J. Denker has added his own 11 TDs and 645 yards (5.33 yd/att) on the ground.

Denker is a very credible running threat but can easily be considered a below average pocket passer. The left-handed QB is lacking in both arm strength and accuracy. Arizona mitigates these deficiencies with short passes. Expect a heavy percentage of their passing plays to be screens, slants, hitches and out routes. Intermediate routes like these have given Denker a 58% completion percentage on the season. When Denker does attempt passes downfield from the pocket, they have a tendency to be lollipops (technical term). He throws a fairly soft ball that takes a long time to get to the target.

Look for Arizona to move the pocket to help play to his strengths, and Denker has great mobility -- not just on the run -- but in extending a play behind the line of scrimmage. He's forced 10-second coverage on defensive backs on a lot of attempts just by rolling and evading defenders. They'll run designed roll-outs and he'll scamper around on his own, buying enough time to let a wide receiver work to get open. A pass rush will need to emphasize contain if they want to be at all effective, Denker has proven very capable of striking deep if he gets outside the pocket. He's also able to make big gains with his feet if the outside linebacker gets lost in coverage and no one at the second level is shadowing for a run stop.

Sometimes, it's more about when you score than the total number of touchdowns you could score in a game. This might be one of those games for WSU. Scoring first, and maintaining a lead, will put pressure on Arizona to play catch-up and force them away from their ground game. WSU can put up points on this defense, but if it's only matching and not maintaining/extending a lead, Arizona will be able to stick to their strength on the ground and eat clock to steal drives from the Cougs.

When Rich Rodriguez was hired at Arizona, he brought in a familiar face, West Virginia native Jeff Casteel, to coach his defense. Casteel worked under Rodriguez during his time at West Virginia and deploys a 3-3-5 scheme. The two decided to run a 3-3-5 for many of the same reasons you hear WSU defensive coordinator Mike Breske and head coach Mike Leach want to run a 3-4: Variability and a recruiting advantage. Competent 3-tech defensive tackles are rare coming out of high school and the battle for their services is hard fought; conversely, there are a multitude of potentially great hybrid linebacker-safety types. 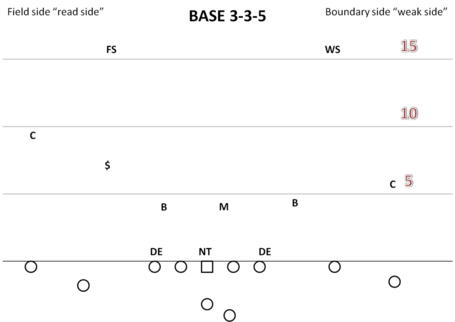 Like the 3-4, or any 30 series front, this defense relies on a strong presence at nose tackle. Casteel's nose tackles mostly play a true zero technique, lining up head over the center and trying to drive him off the ball, while also taking on any A gap blocking in an attempt to free up the linebacker. Arizona doesn't have an exceptional pass rush, and you'll often see them only rush the passer with their three lineman. Defensive ends can line up inside tackles, head up, or split out, but this is usually only to the weak side of the field. They do move alignment a little and occasionally stunt with one backer (sometimes they bring multiple backers but not all that often).

We've seen a variety of blitzes, but primarily when they bring pressure it's an outside backer twist with the DE for a B gap rush, outside backer speed rush the edge, or the middle backer bull rush the A gap when the nose tackle moves to a 1-shade. They sometimes will show blitz presnap, or feint it and drop off into their underneath zone. This is very similar to what WSU likes to do from the 3-4, so the offensive line and Connor Halliday should feel comfortable recognizing and adjusting to these blitz packages.

Like Auburn, Arizona plays with a hybrid backer/saftey at "spur" (this is the conventional name, nomenclature can vary place to place). The spur will also mix in blitzes against a two receiver split to the field side, looking like a fourth linebacker on inside split of the inside receiver. He was seen to vary his depth and spacing based on coverage.

Against California, an offense similar to WSU, Arizona showed a couple of different looks in the secondary. WSU has faced man coverage with two free safeties a lot this season. Most teams that have had the personnel have tried to do it. Former Coug quarterback Alex Brink even touched on the dissonance between facing this coverage and the playcalling in his Monday Morning Quarterback column ($) following the ASU game. We've mentioned this coverage before, and how ineffective Connor Halliday and the receiving corps have been against it. They'll see some of it again down in Tuscon. 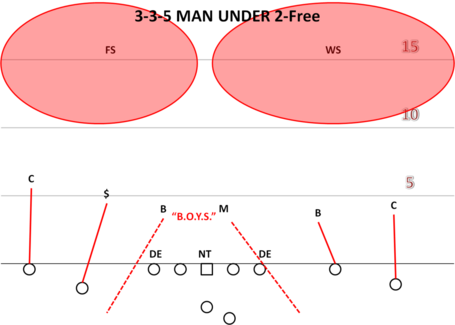 Arizona's corners and backers aren't quite good enough to lock this down all game. Throughout times in the game, the Wildcats switched to a Cover 4 look, and something that looked real similar to the Robber coverage we saw from Auburn and their 4-2-5. 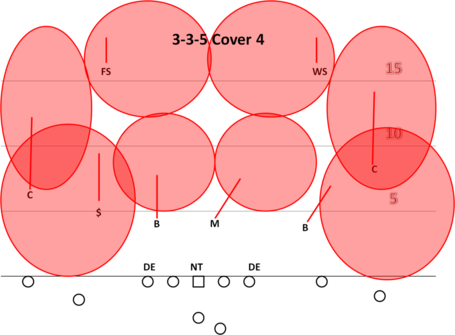 Connor Halliday has looked extremely good against zone coverage this season. Arizona started the game in man under, and started mixing in zone after the first few series. I'd expect something similar from them against the Cougs. Cal was able to get behind the corners and had backers struggling with Y-Cross, WSU will similarly need to beat the man coverage, or wear it out with verticals, before getting to see some of their zone. A strong performance in the ground game could also force them to switch it up.

Arizona also is not a great tackling team. If there was ever a game for the wide receivers to start making people miss, this is it. The Wildcats were well prepared for the Cal WR screen game but still failed to make the open field tackle on a few occasions. They also showed some trouble hanging with RBs to the flat in man coverage.

Here's some examples from the Cal game:

Against a 2 x 2 receiver formation 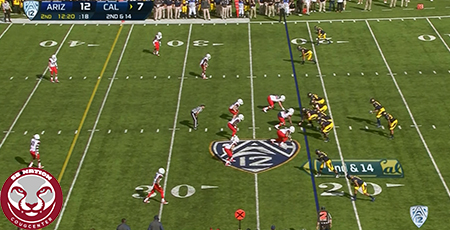 You can see the boundary side backer (bottom) split the distance between the end man and inside receiver, with the spur and corner playing much deeper on the field side (top). This was an obvious passing down, but Arizona routinely played pretty far off the ball.

Against a 3 x 1 receiver formation 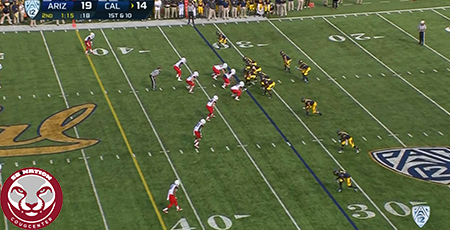 Facing a three-receiver set the spur and outside backer both go to the field side, you can again see the extreme depth of the corners and safeties. 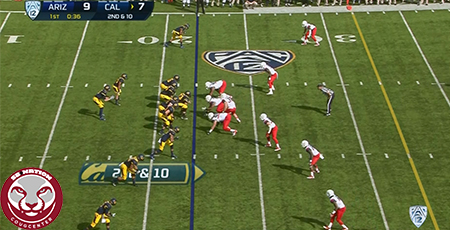 Here we see the middle backer showing blitz (he will) and the secondary in a little closer, this was the predominant man coverage depth. They didn't bump and run at the line very often. In the grab above they all have eyes in the backfield, a hallmark of zone coverage, but that changes at the snap when they all pick up the man in front.

Finding holes in the zone 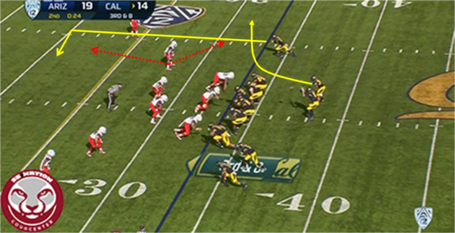 Despite dropping eight into zone coverage, Arizona still finds itself facing a tough coverage choice against five Cal receivers. The corner drops to his deep quarter, leaving the spur to guard the flat. The receiver at the top of the screen curls in front of the corner and safety, sitting right at the top of the spur zone, and the RB releases to the flat. Cal QB Jared Goff just had a misread here.

WSU can score points against Arizona; they play a Cover 4 with extremely deep safeties when they aren't playing a very soft man coverage underneath. The receivers should be able to find holes in both, and the line should give Halliday more time than he's seen in his recent two outings. If the Wazzu offense gets stopped, it will have beaten itself.

The question will be if the big guys on the defensive front can keep Carey from going nuts, because he'll get his yards, and contain Denker from A) running up field, and B) scrambling around behind the pocket allowing receivers to open. Forcing this Wildcat team into 3rd-and-long situations will be key throughout the game, as will playing with the lead.

If Wazzu can avoid beating themselves on offense, keep Carey from having an above average day, and force Arizona to be reliant on Denker's arm, this Cougar team could be playing for bowl eligibility in its last home game in Martin.