The Monday After: Looking back at WSU's loss to ASU

The Cougars were completely outclassed in a 55-21 loss to the Sun Devils, but that might not have been the most embarrassing part.

Share All sharing options for: The Monday After: Looking back at WSU's loss to ASU

After each game, I put up a post that includes some notes provided by WSU Athletic Communications. These notes generally are comprised of interesting statistical tidbits -- where a guy stands on the all-time list in some category, how many times a certain benchmark has been achieved, etc.

Here's a little tidbit they didn't pass along after the game.

When WSU lost to Arizona State 55-21 on Thursday, it marked the third consecutive game that the defense gave up at least 52 points -- the first time that's happened since 2008. And it was in 2008 that WSU last had at least four games of 50-plus points allowed. Finally, in their last four losses, the Cougs have been outscored by 31 points per game, the worst stretch since the last four games of 2009, in which WSU was outscored by 34.8 points per game.

If you thought we were past this crap, you were not alone. I did too. I was impressed with how they battled Auburn and USC to the gun; it was that commitment to competing that earned them the win against the Trojans, a game they really had no business winning.

But at some point this year, these guys started reverting back to the habits that had been ingrained over years of getting their faces kicked in. Against Stanford, they basically gave up in the fourth quarter. Against Oregon State, they didn't fight back when the Beavers started rolling.

And then, against ASU ... well, it's hard to quit when you don't even bother to show up.

Those of you watching the game at home were subjected to a TV viewer's worst nightmare: A broadcast team trying to fill time during a game whose outcome is no longer in doubt. As if the manner of loss itself was embarrassing enough, we were subjected to this indignity: 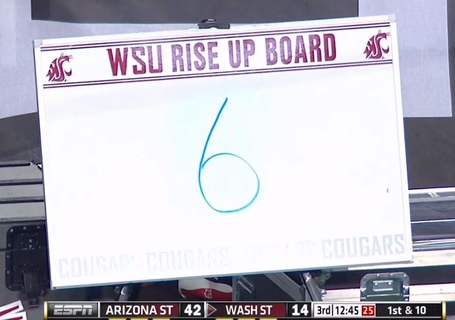 If you went to bed at halftime, or were one of the 2,000 or so people who didn't find a TV in a bar for the second half, here's the "Rise Up Board" in a nutshell: An invention of the coaching staff, good plays of a certain variety earn a point, and the challenge for the team is to get that number as high as possible without allowing certain kinds of negative plays that erase the board back to zero.

Rece Davis and Jesse Palmer spent a fair amount of time extolling the virtues of the Rise Up board, explaining how Mike Leach is using it to try and change the culture at WSU, and how -- even in the midst of a blowout -- it's a great thing WSU has that board so that it can simply concern itself with making the next right play because that's really all you can do when the game has gotten out of hand.

As an educator, I understand why the coaches are using it. Leach has said multiple times that the Cougs need only concern themselves with themselves, that they get themselves in trouble when they start worrying about the game situation or the other team's ability. Intellectually, I understand the importance of this kind of thinking -- the plays that cause the numbers on this board to climb are the building blocks that will eventually lead to victories. Heck, even Nick Saban talked about "the standard" and "the process" in this same context on 60 Minutes.

But as a fan? I wanted to throw something through my television, because -- again, as a fan -- that looks a hell of a lot like a damn moral victory tracker. Sort of like, "Well, yanno, if we can't keep up on the actual scoreboard, we'll just try to keep up on a fake scoreboard that we made up."

Competing against myself is what I do when I go for a jog. That's not what you're supposed to be doing in Pac-12 football.

When this team was 4-2, it sure seemed like the moral victory standard was a thing of the past. And yet, there it was on Thursday -- the Rise Up board, methodically counting moral victories in the umpteenth inexcusable blowout of the last six years.

This is not where you're supposed to be when you're nearing the end of year six -- yes, this is year six, not two -- of a rebuild. As Mark talked about on Friday, I think we all have a right to expect better results than what we've gotten. Maybe four wins is exactly what this team should have, but I don't think four wins with competitive games in the losses is too much to ask.

But apparently it is, because it appears the only scoreboard that matters is that one.

Nothing. No moral victories to add to the Rise Up Board here!

Everything. All of it. There is not one thing that was satisfactory in this game. The offensive line was a disaster a la 2012. Connor Halliday missed plenty of open receivers. The receivers he didn't miss either dropped passes or didn't fight for balls. The defensive line was destroyed. The linebackers were slow and indecisive. The corners were lost. Special teams was a disgrace.

I think that about covers it.

WSU gets another bye this week before heading to Tucson to take on Arizona on Nov. 16. The Wildcats have hardly looked like world beaters, and in fact are the very sort of one-dimensional running team the Cougars have had some success against this season.

How high do you think the Cougs can get that Rise Up board against Arizona? 10? 13?