The Monday After: Looking back at WSU's New Mexico Bowl loss to CSU

Even though it's Tuesday, and even though we'd probably all rather just forget about the traveshamockery from Saturday, we can't help but take one last look back at the final WSU football game of 2013 and laugh at the absurdity of it.

Share All sharing options for: The Monday After: Looking back at WSU's New Mexico Bowl loss to CSU

As I put together this one last Monday After for the 2013 football season -- and Merry Christmas Eve, by the way! -- I can't help but wonder how history will look back on this team, one of just 11 in WSU history to advance to a bowl game.

The instant reaction around the internet, of course, is that these Cougars are a bunch of chokers who can't finish.*

While I'm sympathetic to the plight of writers charged with finding the "story" game after game -- something that I think non-writers simply cannot comprehend about writing (especially when it comes to those who write with great frequency) is how difficult it is to come up with a unique and fresh angle each time -- reducing this game to something as trite as a choke job and/or a heroic effort by Colorado State is lazy as hell and misses the point entirely.

People are really trying to find some fatal psychological flaw in a team that was, before Saturday, 5-0 in games that it led in the fourth quarter? A team that protected late leads against USC, Arizona and Utah to get bowl eligible in the first place? At what point between Nov. 23 and Dec. 21 did this team forget how to win?

What we all really should be doing is simply taking a step back and marveling at the sheer improbability of it all.

Improbable Event 1: CSU covers 72 yards on nine plays in 88 seconds to score a TD and pull within eight points.

When Colorado State got the ball with 4:17 to play at its own 28 yard line, the Rams had possessed the ball five times in the second half. Three times, they had punted. Once, they had turned it over on a fumble. The only blemish was Kapri Bibbs' 75-yard touchdown run, made possible by a stunning and uncharacteristic missed tackle by Deone Bucannon.

Yes, CSU had done a fair amount of marching up and down the field in the second quarter, but that appeared to have been rectified. So what did CSU do?

Oh, you know, put together its second longest scoring drive of the day in a mere 1:28. The ease with which Garrett Grayson carved up a Cougar defense that had allowed under 4 yards per play in the second half outside of that Bibbs run was stunning. Even though the drive surely was aided by some conservative play calling by defensive coordinator Mike Breske, prior evidence suggested such a drive was unlikely.

Laufasa carried the ball 35 times this season. You know how many of those carries came after Laufasa had spent an extended period on the sideline? Most. You know how many times Laufasa put the ball on the ground on his first 34 carries, despite coming in cold? Zero.

Say what you will about the improbability of a CSU touchdown after the previous drive, but the odds of getting both the TD and the two-point try have to be under 50 percent, especially when considering the man in the best position to make a stop on the two-pointer was blatantly held. Perhaps CSU still converts the try from the 13 yard line, but again ... improbable.

Caldwell had put the ball on the ground a few times this year, but relative to the overall number of touches, this was a highly improbable event. And finally ...

While there certainly is a skill to forcing fumbles, and CSU deserves a lot of credit for ripping the ball out repeatedly, one thing we know about fumbles is that once the ball is on the ground, recovery is statistically a 50/50 proposition. Colorado State got extraordinarily lucky to recover both fumbles -- even more so you take into account that the Rams also recovered of Connor Halliday's "fumble" that wasn't.

(For what it's worth, WSU had lost just nine of 22 fumbles and recovered 14 of opponents' 25 fumbles before those two gaffes, meaning they were +3.5 on the fumble luck scale. You are a cruel, cruel mistress, fumble luck!)

Now, I'm not a math wiz, but even I know that when you start compounding improbable results, the odds of ALL of these things happening to produce the ultimate result are incredibly small. I don't know how you'd assign a number to it, but given how many games you watch, can you recall a game where a team had a 15-point lead and coughed it up because of a pair of fumbles on consecutive touches that both ended up in the hands of the team that needed it with said team converting it into points every time? Gotta be under 1 percent.

I know many have been arguing that it could have been zero percent -- or at least, closer to zero percent -- had the strategy been handled differently by either the coach or the quarterback. But when you're talking about a 1 in 100 or 1 in 500 or 1 in 1,000 event ...

I just can't bring myself to have any other reaction to the ultimate result. Yeah, I hope some good comes out of it in some way, but that's sports, and wacky stuff happens. It's why we watch.

Just sucks when you're on the business end of it.

*Side note for Kevin Gemmell: You took the lazy way out on this one and I will never forgive you for legitimizing the use of that term in a column. It's not often that I go all Bruins Nation and get totally indignant about something that probably isn't that big of a deal in the grand scheme of things, but dammit this is my one thing and you just couldn't resist pandering to the most convenient narrative on this one, could you? Ridiculous and inexcusable.

The experience of playing in a bowl game! No matter the crazy ending that we'll be reminded of forever, nobody can take away the accomplishment of playing in a bowl game for the first time in a decade. It's a tangible measure of how far this program has come in two short years and an undeniable sign that WSU is heading in the right direction under Mike Leach.

The Cougs play better for longer stretches than they have at any point in the last six seasons, and have shown a level of resiliency that has been missing over that time. And because of that, there's really only one thing that bums me out to no end about the way the New Mexico Bowl ended.

Man, that final record just sticks in my craw. As others have written, there's really very little about 6-7 that's different than 7-6 in terms of actual status relative to mediocrity. But look at those two records again.

There's just something about seeing the bigger number as the first number, about coming out on top in more games than not, even if it's only one more time. And when the difference between that winning season and losing season is a collapse of epic proportions, the kind that coaches will point to for the rest of eternity as "see that's why you never stop playing hard"?

Well, as Brian said ... it just stings. And I feel like these guys deserved better than to have "6-7" etched into the record books for as long as football records will be round.

But I'm pretty excited about where we're heading.

How about Colorado State handling itself with some class?

Whether it was an assistant coach directing a slur at one of our players, or a Colorado State defensive lineman delivering a late hit on that player a short time later with the seeming tacit approval of that coach, or a pair of offensive linemen blatantly, intentionally and illegally chop-blocking WSU's most important interior lineman -- injuring him for the remainder of the game in the process -- or this, immediately after the game ... 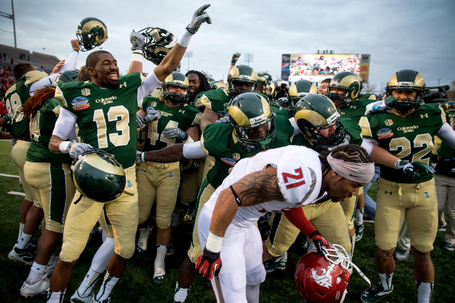 ... or the stories I've heard from Coug fans about the behavior of CSU fans in the evening following the game, let's just say I have absolutely zero respect for Colorado State or anyone associated with Jim McElwain's program.

I'll be rooting for them to lose every game next season so they can return to the dumpster from which they emerged and in which they so obviously belong.

How about Theron West, who came out of nowhere to start the game, only to catch a touchdown pass and block a punt? Leach makes it clear that anyone can have their job taken at any time, and little-used junior college transfer did something to pass Caldwell on the depth chart in the practices leading up to Saturday.

His touchdown reception was a thing of beauty. With Connor Halliday scrambling, West took off in what looked like a Y-sail route to an open part of the field, outracing Shaquil Barrett, who clearly is better suited to rushing the passer than covering receivers in space, to the end zone.

West is going to face stiff competition for carries in his senior year, as Marcus Mason and Caldwell both return, but it's encouraging to know WSU might have another reasonably competent back to put back there.

Or maybe he can play corner?

I'm just going to put the defensive line in here together. The total lack of a pass rush is inexcusable, considering these same guys put more pressure on teams with ostensibly better lines. Maybe Grayson can't march the Rams down the field with such ease if he's made the slightest bit uncomfortable.

Sure, Breske could have mixed in a blitz, but you've got to be able to get occasional pressure rushing four. WSU could not. This has to get better.

Dishonorable mention: Casey Locker, who appeared to blow the coverage that led to the 63-yard touchdown pass from Garrett Grayson to Charles Lovett.