In the next installment of our series deconstructing the Air Raid offense Mike Leach brought to WSU, we take a deeper look at what happens after the pre-snap read.

Throughout the next couple months leading up to the Crimson and Gray game, we will be presenting an Air Raid playbook series. The hope is that you'll get a better understanding of how the offense works and why it's conceptually able to exploit defenses, and if you're able to apply that to enhance your enjoyment of watching the Cougs, all the better.

Now that we know some of the basics about reading a defense and a few common secondary coverages, let's apply that to a few in-game examples from the Apple Cup.

Did you miss part 1? Air Raid Playbook: Reading the defense

This play comes with about 4 minutes left in the 3rd quarter. Below is the pre-snap alignment. First, notice the positioning of the corners and the two high safeties. Counting the front, we see there's 6 in the box with a backer split out on the inside receiver up top (H). Have any ideas about the coverage? 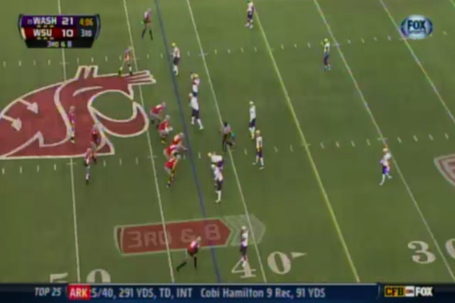 Washington had been playing a lot of Cover 4, and also appeared to mix in a few plays in Quarter-Quarter-Half. This alignment has a good possibility of being either one of those. QQH is more commonly played when an offense is on the hash.

The positioning can indicate a lot, but the post-snap movement will tell you the most about coverage. Even then player movement can have levels of ambiguity, sometimes the best you can do is rule out certain coverages.

The corner guarding the receiver down low (Z) could either be in Cover 2 alignment, man, or simply be playing Cover 4 tight on the backside. The corner and safety up top show Cover 4 positioning. But then things change.

Quarterback Jeff Tuel lifts his leg once. In the Air Raid, the center is responsible for snapping the ball. He doesn't depend on a cadence from the QB, rather, he looks for the QB to signal he's ready and snaps when he wants. UW tries to anticipate this snap and gives away it's coverage prematurely. Tuel catches it, you see him make a line call and point to the right. Does this movement tell you anything?

Below is the offensive play with what the pre-snap movement indicates (the blitzing corner isn't completely telegraphed but I included the line so you could see the coverage better). UW rolls it's Cover 4/QQH look to a Cover 1 with a strong side backer and corner blitz. 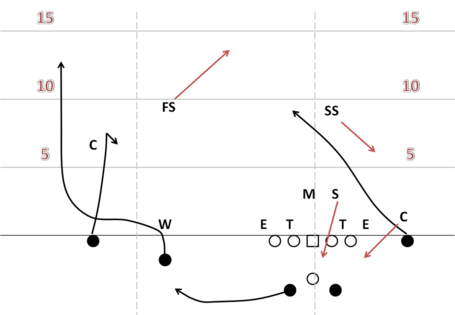 And now a GIF to see how the coverage rolls. Tuel hits the curl right at the sticks for a first down.

The next two plays happened on the Cougs' first trip to the redzone. They don't involve any disguised coverage; instead, pay attention to how the Huskies play the coverage we think they're in. 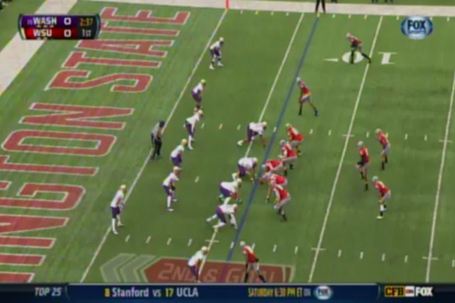 UW again plays the corner tight on the backside, has 2 high safeties and 7 men in the box. This is how the Huskies choose to defend this formation in Cover 4 on the goal line. Conceptually, the Cover 4 would work something like this 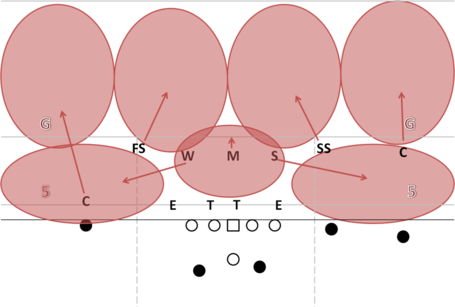 You can see this requires highly athletic backers. Below is the play call and the post snap movement from UW. The Cougs run a play called X Shallow Cross. The bottom receiver (X) will run underneath the inside receiver (H), creating a mesh point a few yards past the line of scrimmage. 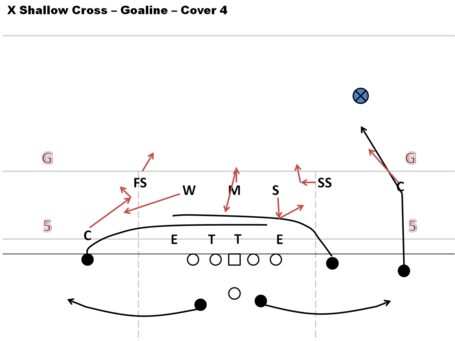 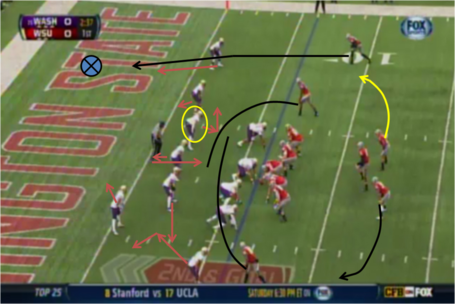 The outside linebacker (yellow circle) is responsible for covering the flat, he chooses to engage the crossing H receiver and doesn't ever quite get there. Tuel likes the slant on the outside (Z), trying to fit the ball between the corner and safety in the endzone. Isaiah Myers was indecisive with his route and couldn't find the open space in the correct timing.

The WSU coaching staff spotted the weakness. The running back was wide open on his swing route to the flat on the two receiver side. The next play call was for the exact same thing, but flipped. H moves over to the left and Z runs the shallow cross route. Coach Leach has been known to attack a perceived weakness until the other team stops it. He's not at all shy to call the same play repeatedly. 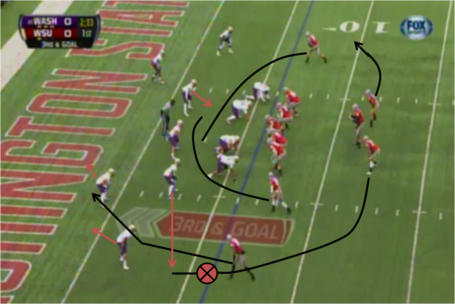 The backer, who is more of a hybrid strong safety, gets to the flat in a hurry, stopping the running back in his tracks and forcing an Andrew Furney field goal. Luckily for the Cougs it wasn't Furney's only field goal of the game.

Whether it's reading the coverage before a snap, adjusting to it afterward or scheming against it with play calling, recognizing and understanding defensive coverage is a large part of any offense. Having a basic understanding of what the quarterback is reading on the field will help you say why he threw it to one route or another, maybe impress your friends.