Mike Leach was unusually reliant on the pass in 2012, even for him

Just how dependent on the pass was 2012 WSU? Very. So how uncommon was WSU's reliance on the pass? Very.

Share All sharing options for: Mike Leach was unusually reliant on the pass in 2012, even for him

This data was compiled using the tables from cfbstats.com. Over at Football Study Hall, Bill Connelly has released a "boatload" of data. If you're a stat nerd, I'd highly recommend downloading some of it and after playing around, post whatever you find interesting. Visuals are fun. I was looking for trends between conferences and happened to stumble upon this gem. 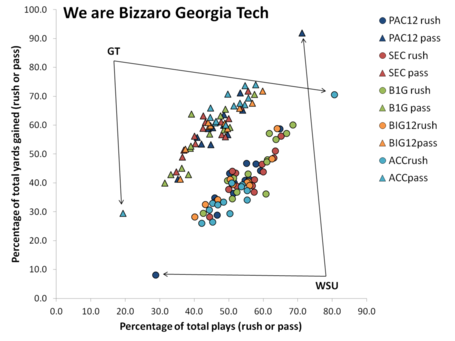 Most teams lump between 60-40, ranging from running 60% to throwing 60%. Not WSU and not Georgia Tech. The Cougs are essentially the exact opposite of the Yellow Jackets and both teams are the only notable outliers.

And yes, you are reading that figure correctly, less than 10% of offensive yardage came from the running game. The new Pistol stuff can't get here soon enough.

Here's the data if you want to look through the numbers, all stats are a per game average for the season.