Which unit holds the most blame for WSU's general awfulness on the football field the last five seasons?

Share All sharing options for: WSU football stats: Which unit sucked the most from 2008 to 2012?

The last five years of WSU football have been terrible. The Cougars have consistently spent time near the bottom of not just the Pac-12, but all of college football. It started in the Paul Wulff era with a three-pronged attack of awful and continued into Mike Leach's first season on the Palouse.

The offense has been bad. The defense has been bad. Special teams have been bad (save for one outlier). But which unit holds the most blame for the Cougars' struggles from 2008 to 2012? A quick jump to Football Outsiders and its F/+ ranking system can help determine who was the worst of the worst.

First, the rankings for each unit, as well as the overall ranking, for each of the last five seasons (improved graph thanks to help from Brian A.): 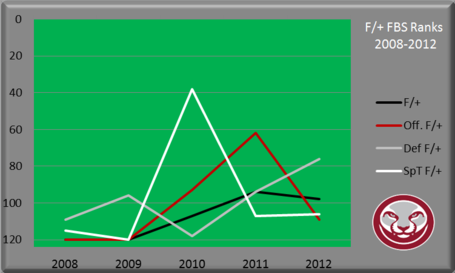 Just for clarification, there were 120 teams in FBS from 2008 to 2011, and a 124 teams last year. The graph shows that WSU was dead last overall and offensively in 2008 and 2009. The Cougs were worst than 90th in all categories twice and worse than 80th in at least two categories every year.

But hey, check out that 2010 special teams performance! WSU was not completely atrocious at covering kicks that season, and finished 38th in special teams F/+. The only other units that cracked the top 80 were 2011's offense, which was dangerously close to average, and 2012's defense.

So, which unit takes the most blame? Special teams doesn't count towards the total F/+ ranking as much as offense and defense, so it's going to come down to those two. Adding all the data yields this distribution of blame: 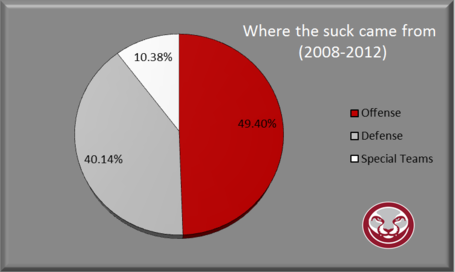 Led by years of undersized and undertalented linemen, the offense takes the title here as biggest contribution to the overall ineptitude of Cougar football from 2008 to 2012. The defense put up a valiant effort, and would have won in a landslide in most programs. But it's tough to come out on top against an offense so bad it didn't even bother trying in a 69-0 loss to USC back in 2008 (the defense tried and failed miserably).

If there is any silver lining to take from this, it is that all three units sucked in harmony for the most part. This was a team effort by all parties involved. The big question now is if they can they show that same togetherness, but by not being bad at football in 2013.