There weren't a lot of questions for coach, but he did have some interesting answers, as usual -- including some insight into the quarterback competition.

The WSU Cougars haven't been a real interesting football team the last decade or so, and that was reflected in the fact that the assembled journalists at Pac-12 media day only asked four questions of the WSU contingent this morning.

The Clowney hit ... is why they have football and it's why football was invented and it's one of the greatest American games there is. -Mike Leach at Pac-12 media day

Still, there were some mildly interesting nuggets in the responses from coach Mike Leach and safety Deone Bucannon.

Let's start with the quarterback competition, where Connor Halliday and Austin Apodaca are set to battle for the starting job. The other day on ESPN, Leach was effusive in his praise of Halliday while somewhat more reserved in his assessment of Apodaca. That continued today, with Leach going even one step further.

"If we were to play today? If we were play in a couple months, I don't know, but today, Connor Halliday would be the quarterback," Leach said. "Had a great spring, did a great job. What I've been impressed with is, as a leader, he takes the team on his shoulders and he's one of the guys I think brings people together.

"The most significant role that a quarterback plays is enhancing the skills of the other players around him. You know, I mean, each team you go out there with has an arsenal of weapons and his ability to utilize most effectively those tools in a sharp, crisp, timely manner is huge as far as maximizing offensive effort. And I think he's done a lot of good things, and I'm excited to see where he's at because he's worked hard this off‑season."

"Austin Apodaca behind him, freshman, had a huge spring," Leach said. "He hadn't even thrown balls to the ones until spring football and I thought did a great job. Both of them are smart guys that pick things up quickly."

One of the big topics of conversations for everyone is the new emphasis on making football safer for the players, an initiative that has resulted in everything from new rules that call for a player to be ejected for targeting to the Pac-12 limiting full contact practices this season. 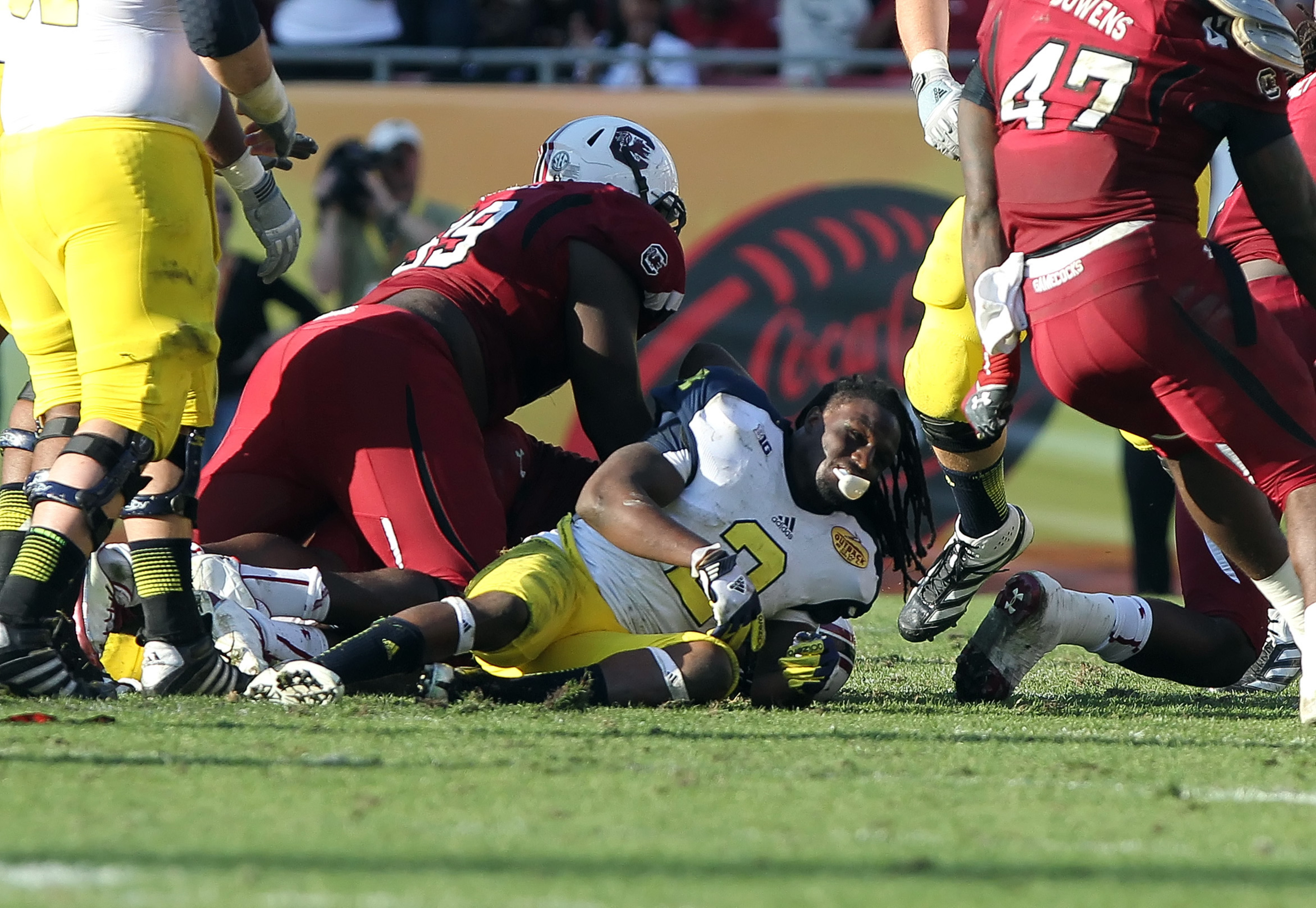 Coach had some thoughts on the SEC and the new targeting rule: "I'm getting tired of everyone apologizing for playing football."

Leach had some strong opinions on that during his appearance on ESPN's First Take earlier this week, and he expanded on that today.

"I'm not the only one against this rule," Leach said. "Rules, in order to be effective, have to be enforceable and you've got to be able to see it. If I get these guys across the room and I have them run full speed at each other and I ask you in a split second to tell me which one lowered their head first, I betcha you can't do it. So I think that is a huge problem."

Then, Leach took it to what has become the flashpoint for this controversy, and answered it in his typically quotable style.

"The other thing is, you know, in one of the plays that's getting criticized, is the Clowney hit," he said. "That is why they have football and it's why football was invented and it's one of the greatest American games there is."

"Everything that can be done to prevent head trauma and prevent student‑athletes, that needs to be done and it goes along with technology, along with teaching people to tackle properly, and things like that," he said. "If somebody is running at you and you're going to button up to take the hit and then it becomes a guessing game of who loader their head first, which, you know, we're back to the Halo Rule where you can't sort it out and you can't discern it. I think that's a gigantic issue."

One interesting angle for WSU fans is that Bucannon has been flagged a number of times over the past couple of years for targeting defenseless receiver -- penalties that surely also would have come along with an ejection. What does he think of the rule?

"Like Coach Leach said, it's definitely a rule that's going to be hard to abide by, going full speed," Bucannon said. "But at the same time, you know, whatever helps the other players for player safety. So if that's what the rule is, then I'm going to try as a player to the best of my ability to abide by those and to be as safe as possible for the other player and myself. I'm going to be more aware on the field and make proper adjustments like I should."

Of course, it wouldn't be an interview with Leach without some off-beat questions and equally off-beat answers. Asked about his zombie comment last year and if players are buying in this year:

"We have had a great off‑season. It started in January, worked incredibly hard. These two specimens that I have beside me, Elliot Bosch, Deone Bucannon, that's what I pretend to see when I look in the mirror, when I shave, so they're in incredible shape and we couldn't be more excited to see what they can do out there on the field."

And, what have you been reading this summer, coach?

"Honestly, mostly I'm reading that book we're writing [on Geronimo]," Leach said. "Books are funny things. They're satisfying, ultimately; but then, you know, there is a point where it gets tedious and you get tired of the same stuff over and over. Books almost go a little beyond even the confines of, say, a marriage. You write a book, that's there forever. There is no divorcing a book, you know"

"I'm preaching to the choir here, you guys all know more about this than I did. You go through the sentence, should we put the first part last, the last part first, shall we say is precise? Was this clear?

"So I did a lot of that. The research is the most exciting part, discovering, you know, what Geronimo did, the existence of the Cherokee with a Apaches and their skills in surviving and some of the incredible accomplishments that they had, the fiber of their culture, their spiritualism, their family relationships, so that part of fulfilling. I would love to say that there's three great books that everybody should read. We sent the Geronimo book for first edit a week ago, Buddy Levy, I'm working with Buddy on it who is on history decoded a brilliant research author and all that. We're excited about it.

"So when the Geronimo book comes out, you know, everybody needs to buy a copy and you ought to buy a couple of extra in case you lose the first one. It's exciting and we're looking forward to it."

Now, you might have noticed there were no quotes from Bosch, the offensive lineman who also joined Leach and Bucannon on stage. That's because he was asked zero questions, which probably is for the better since they probably would have been something along the lines of, "How are you not going to suck as an offensive line this year?" That would have been no fun for anyone!

The morning wasn't a total waste for Bosch, though. He got to work on a television promo.

Huge thanks to ASAP Sports for the transcription of the quotes.