We've already taken a look at the defense. Who's fighting for playing time on the other side of the ball? Here's an offensive depth chart and some analysis to get you thinking.

Share All sharing options for: A look at WSU football's fall camp position battles on offense

Fewer questions surround the offensive two deep heading into camp this year than did last season, with the new coaching staff and influx of fresh talent, but that doesn't mean there won't be some intense competition down in Lewiston, Idaho.

Here's a look at the depth chart, and major players at each position battle on the offensive side of the ball.

Bold names are starters, names in red are freshman.

The coaching staff hasn't been afraid to shuffle the line around in an effort to find the combination of the five best lineman, so it's reasonable to expect more of the same and that these positions listed in the two deep may change a bit.

TACKLES: Eduardo Middleton moved from right tackle to back up Gunnar Eklund at left tackle. Left tackle is arguably one of the more important positions, protecting the blind side of a right handed quarterback. Eklund started seven games for the Cougs in 2012, missing the final three due to an arm injury, and held the starting spot through the spring. Middleton swapped back up duties with Jacob Seydel, who is now competing with Rico Forbes for the start at right tackle. Every indication is that Forbes will get the start, as Forbes was a likely starter a year ago if it wasn't for injuries.

GUARDS: Joe Dahl, John Fullington, and Matt Goetz are in a three-way battle for starting guard duties. All have played on one side or the other and this is likely a case where the best two will start with the odd man out will providing depth at both positions. Goetz earned his letter as a redshirt sophomore in 2011, playing center. Last season, he played right guard for games against Oregon, OSU, UCLA, Utah, and Washington. Fullington is a senior, starting out the first two games of 2012 at left tackle before moving to left guard for the rest of the season. Dahl is a redshirt sophomore walk on who sat out last season after transferring from Montana.

CENTER: Elliot Bosch has this position locked up. Simple as that.

It will be interesting to see what happens with the incoming freshman, Carlos Freeman, Cody O'Connell and Riley Sorenson. Freeman is a center and isn't expected to beat out Bosch, but he could fight his way onto the two-deep out of camp and earn some spot work this season as Bosch's back up.

Sorenson and O'Connell are both huge, physical lineman that likely have every intention of getting on the field as freshman. O'Connell is coming off an ACL injury he suffered his senior season in high school, but he could be healed enough to get in and push to crack the two-deep. Sorenson could also get in and compete right away. We aren't sure where they would be slotted, as they are capable of playing any position on the line that doesn't snap the ball, but they both seem to have an offensive tackle skill set. I'd expect all of these guys to come into camp and make the decision to redshirt as difficult as possible for Coach Leach. 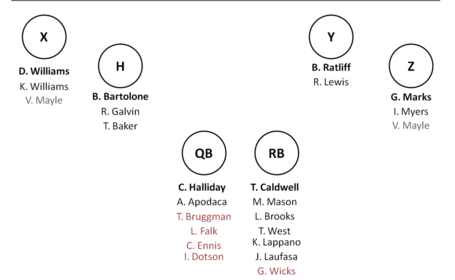 Players in bold are starters, gray are transfers, and red are incoming freshman.

QUARTERBACK: Connor Halliday has thankfully taken charge and put any real indecision about who the starter is to bed. Backing him up will likely be Austin Apodaca, so the real competition will be between Lucas Falk, Connor Ennis, Isaac Dotson and top recruit Tyler Bruggman for the No. 3 spot. Bruggman will likely get a redshirt, unless there is a serious lack of ability in the others to be a viable third stringer and some injuries (please, no) happen during the season.

RUNNING BACK: Teondray Caldwell looks to be a solid lock for the top running back spot, with a slew of others beneath him. Marcus Mason is currently edging out Leon Brooks in the two deep, but a kid to watch will be incoming freshman Gerard Wicks. Wicks has every intention of starting, and could climb past Mason in camp to get on the field in 20 personnel sets and play behind Caldwell, perhaps even pushing him for starter reps by the end of the season.

WIDE RECEIVER: This will be the most intense in camp, and will almost certainly leave someone very talented on the outside looking in with regards to playing time. Marks has all-conference potential and has a pretty good lock on the Z position. Dominique Williams came on in the last few games of the season, including an 8-catch, 143-yard Apple Cup performance, and was second on the team with seven receptions of 25 yards or more.

Incoming JC transfer Vince Mayle is good enough to challenge him for a starting role at X (want to get justifiably excited about Mayle? -- WATCH THIS). If Dominique Williams is good enough to hold on to the spot, Mayle will push both Kristoff Williams for backup duties at X, and Isiah Myers at Z. Both guys had solid seasons, and some think Kristoff Williams is primed to have the break out year we've been waiting for since he arrived on campus. Mayle's talent might be impossible to keep off the field. If the outside positions are too solid to crack, he could see some time at Y, or it's possible he splits time at X and Kristoff Williams moves inside.

There may need to be some shuffling at receiver to make room. Outside receiver is talent rich and it should be a lot of fun watching them all compete for the right to start.

Brett Bartolone stepped up as a freshman and shouldered the load at H after Rickey Galvin's injury against UNLV last year. He still holds onto that number one spot going into camp, but that competition should be another to keep an eye on. H wasn't nearly as productive for the Cougs as it needed to be last season and Bartolone will have to greatly improve his ability to turn targets into yards, or he could get passed by Galvin.

Bobby Ratliff looks to be the guy at Y this season, although Robert Lewis is a dynamic athlete that could play his way onto the field if Ratliff struggles.