Who's fighting for playing time on the defensive side of the ball? Here's a depth chart and some analysis to get you thinking.

Share All sharing options for: A look at WSU football's fall camp position battles on defense

Who's battling for a starter position?

Every one of 'em. Every one is battling to be starters, that's just a fact. Even within that, you're battling to see how many reps you get. - Mike Leach

Coach Leach emphasizes competition -- these guys compete every day, in almost every drill. There's always a winner and a loser, a best and worst. That magnifies over camp. It's their first and best shot to prove they deserve reps. The players are ready.

I gotta ball out this fall camp to make an impact this year http://t.co/treOcfv03P

The Coug defense established itself over the course of last year's season and the front seven looks to be one of the stronger units for Wazzu in 2013. Younger talent has aged a year, and a couple junior college transfers are fighting to get on the field. Here's a look at the depth chart; we'll highlight some of the major position battles. 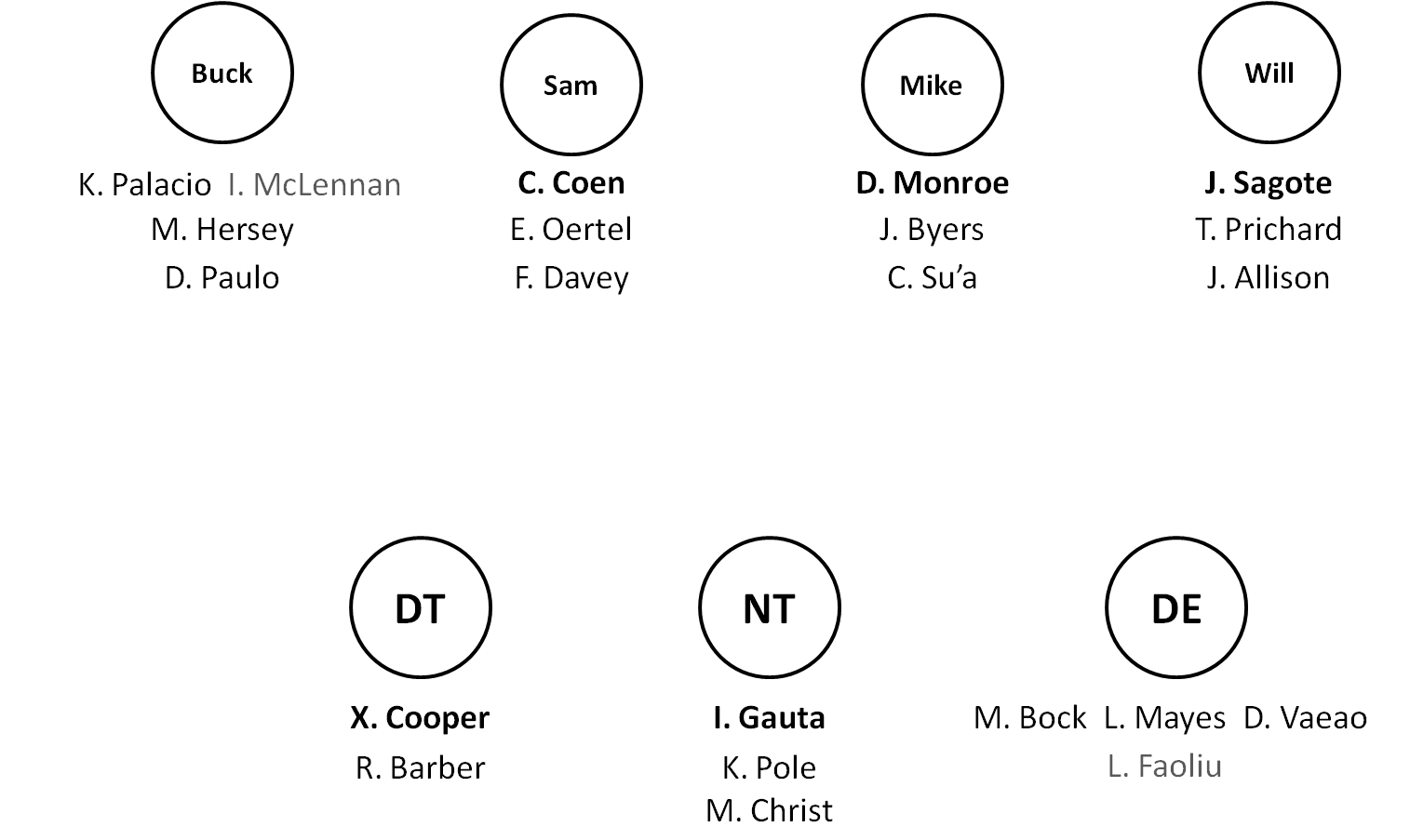 INTERIOR DEFENSIVE LINE: Xavier Cooper, Ioane Gauta, and Kalafitoni Pole will see heavy rotation on the inside of the defensive line, with Moritz Christ and Robert Barber battling to get some playing time at the two-deep. The top three are pretty established here.

DEFENSIVE END: That's not the case at defensive end, where Matthew Bock, Logan Mayes and Destiny Vaeao are in a three way contest for starting duties. Vaeao, the sophomore from American Samoa (Tafuna) has the size ( 6-foot-4, 290 pounds) over Bock and Mayes, but is still raw compared to their experience. Mayes played well at Buck last season behind current NFL Philadelphia Eagle Travis Long, but switched to defensive end this spring. Mayes is a dynamic pass rusher, but may not have the pass coverage versatility Breske wants at Buck going forward.

This fight over defensive end may not be resolved out of camp and the top two or three could see some steady rotation to give the offense different looks. Newcomer Lyman Faoliu could throw a wrinkle in the top three and earn some playing time with a great camp. 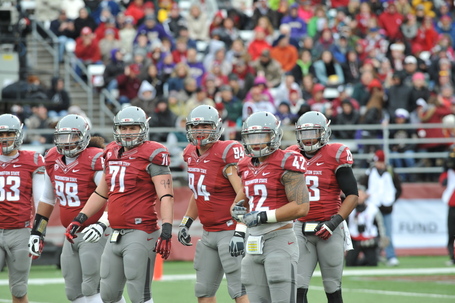 BUCK: Sophomore Kache Palacio had a solid spring at Buck. Fighting him for starting honors is junior college transfer Ivan McLennan, who is 6-4 and 244 pounds and looks every part the role of college linebacker. Between the two of them, you have a really close battle between guys with speed and coverage ability. Both are excellent, with McLennan improving daily as he learns the system. Palacio probably has a slight advantage in pass coverage, but both are fast, athletic, and hit hard. I don't expect this position to have a clear favorite out of camp either, and wouldn't be surprised to see them split reps, perhaps even situationally at the beginning the season, until one starts to separate.

LINEBACKER: Cyrus Coen and Eric Oertel have been the number one and two at Sam backer for about a year. Fall camp isn't likely to produce a change, but Feddie Davey getting a look at backer, moving down from safety, could introduce some interesting coverage packages if he's good enough to play his way onto the field.

Darryl Monroe is awesome at the Mike. The intriguing battle is over who gets to spell him for a couple plays a series until his conditioning gets to the point he can go all out, every down, all season. Last year Jared Byers held that responsibility. Chester Su'a moves from Will to Mike this season. The two are about the same size, but Chester rather easily has an advantage athletically. How quickly he's able to adapt to the middle backer role will probably be the deciding factor coming out of camp. Byers plays hard, with full motor on every play; he won't make it easy for Su'a to walk in and take his spot.

Justin Sagote has a pretty firm grasp of the starting spot at Will. Jeremiah Allison moves from third string at Mike to compete with Tana Pritchard for back up duty. Allison mainly played special teams last season as a true freshman and it'll be exciting to see how well he competes with redshirt sophomore Pritchard, who also saw most of his action on special teams. 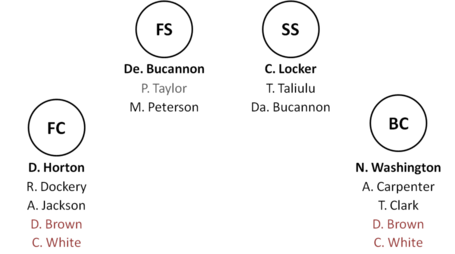 Bold players are starters, gray are transfers, and players in red are incoming freshman.

CORNERBACK: Damante Horton is the starter on the field (wide) side, but the competition for that spot should also be one of the more intense in camp. Rahmel Dockery and Alex Jackson, both redshirt freshman who converted to defense full time last season, are looking to get their first sniff of playing time. Horton hasn't exactly earned the right to have his name etched in stone as the starter, despite being a senior. This position is very much up for grabs and could come down to who has the better fall camp.

Across the field on the boundary side (closest to the sideline), Nolan Washington and Anthony Carpenter are currently in the two deep and both have heard a lot of praise from the coaching staff. They're probably clear of Tracy Clark, battling each other for the starter role.

Daquawn Brown and Charleston White could factor into the depth at cornerback on either side this year. The incoming freshmen are highly talented and could easily push the guys above them for spot playing time. Redshirting is also possible, but these two could probably compete for the three-deep right away and have an impact on special teams as true freshman.

SAFETY: Deone Bucannon is a team captain at free safety. Back up duty will be fought over between incoming Sophomore transfer Paris Taylor, and redshirt junior Mitchell Petersen.

Strong safety should be a position to keep an eye on. Casey Locker has done well enough to be on the field on Saturdays, but pass coverage has been an obvious weakness. Taylor Taliulu almost beat him out as a true freshman last season before Locker established more consistent play and earned the top spot. If Taliulu shows any sign of consitency, his talent and athleticism should propel him to the starting role. He heads into camp at number two, but that could change pretty quickly if he strings together a few good days.