The coach told a radio show in Seattle that Mayes wanted to be an every down player.

We finally have our first semi-official confirmation that Logan Mayes is, indeed, going to be transferring from WSU as Mike Leach told Ian Furness and Jason Puckett of KJR 950-AM in Seattle that Mayes wanted to play more than he was going to play at WSU. 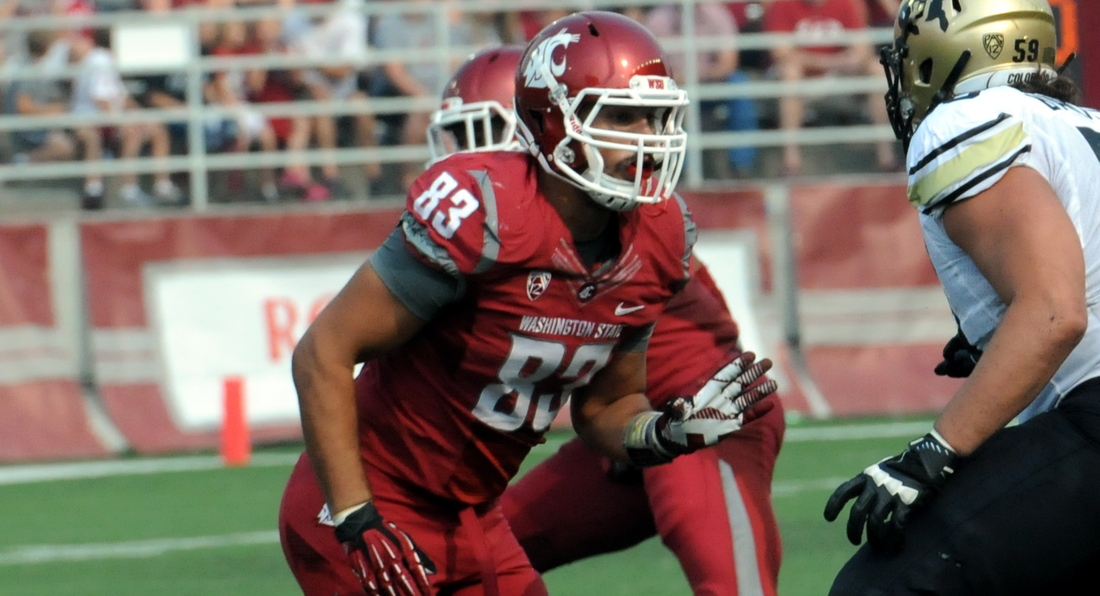 Our original story on Mayes' tranfer, first reported by Cougfan.com.

Leach said that given where Mayes was at in his career -- with just two years of eligibility remaining and a redshirt year to use -- and what his personal goals were, "It's hard to argue with his decision."

At the end of last year, Mayes appeared to be the heir apparent to Travis Long at BUCK linebacker -- which is a hybrid outside linebacker/defensive end -- but he was moved to defensive end this fall, where he was unable to crack the two deep, leaving him as a guy who likely would have only played on clear passing downs.

Leach said he thinks Mayes is a "great person," and the split certainly sounds amicable from the program's end, given how we've heard Leach address departures in the past. (Then again, given the way they view Mayes, I wouldn't expect him to be too broken up about losing a guy who would have played less than 10 snaps a game.) It's tough to say if Logan Mayes feels the same way, but Rueben Mayes was diplomatic in his quotes with Bud Withers earlier this week.

While I tend to trust Breske's judgment -- he has a long track record of awesomeness as a defensive coordinator -- I'm fairly certain that the program is worse for Mayes' departure. That has less to do with what I project his on-field contribution to be (like I said, I trust Breske) and more to do with the kind of person Mayes is.

It says something about a person when he's told (according to Rueben Mayes) that he'll have no chance of cracking the two deep before camp starts, and instead of transferring right then, busts his tail through all of fall camp -- it should be noted that fall camp isn't fun -- in an attempt to do what the coaches already (reportedly) had told him was impossible. You want guys like that in your program.

Beyond that, I don't know anyone who's ever had a bad thing to say about the guy. I'll tell you about my own personal interaction with Logan.

Some of you might remember my Cougar Sports Weekly venture. The Mayes family was one of my subscribers, and one week, I dedicated the newsletter to breaking down how the BUCK position was used in the 2012 spring game. About a day or so after the newsletter went out, I got an email from Logan himself. He set me straight on a few things, but in a way meant to educate me, rather than belittle me. As you might imagine from interviews you've seen, that doesn't always happen when coaches/athletes and media are involved. He was kind and articulate and I came away incredibly impressed.

All I can do now is hope Mayes goes to Cal Poly and thrives. I'm sad it didn't work out, but sometimes this stuff happens -- Mayes was recruited by a different staff for a different defensive scheme and sometimes that works out (Travis Long) and sometimes it doesn't. It makes it even more difficult when the player is the son of a legendary Coug. As a fan, you really want those situations to end well, and I'm bummed that it didn't.

I'm confident in saying the program is worse off now than it was before. Best of luck to Logan. I'll be rooting for him.

You can listen to the entirety of Leach's interview in the player below. The Mayes stuff picks up around the 11:40 mark.