Despite interceptions, sticking with Connor Halliday is the right call

There's more to gain by letting him grow against two weaker opponents than there is by starting over again with Austin Apodaca.

Share All sharing options for: Despite interceptions, sticking with Connor Halliday is the right call

When Connor Halliday threw his second interception -- which, incidentally, is the focus of our breakdown in the video above -- for his third turnover of the first half against USC, the calls for him to be benched were swift and loud.

I was part of it. I don't hate Halliday; it wasn't rage filled, or anything like that. I just reached a point where I thought, "OK, that's three turnovers, the last of which was an awful decision to wing a ball into a place where it had very little chance of being completed. This game is still within reach. Let's get Austin Apodaca in there and maybe he can manage this thing to a favorable conclusion."

Of course, no change was made. And as it turned out, Halliday was the one who managed the game to its favorable conclusion. He had zero turnovers in the second half, and if we want to take it even a step further, I don't think he even had a decision that appeared obviously questionable. He ate a ball for a sack. His short, quick throws -- clearly the main staple of the second-half gameplan -- were on target.

Brink to Halliday: 'Be a better manager' 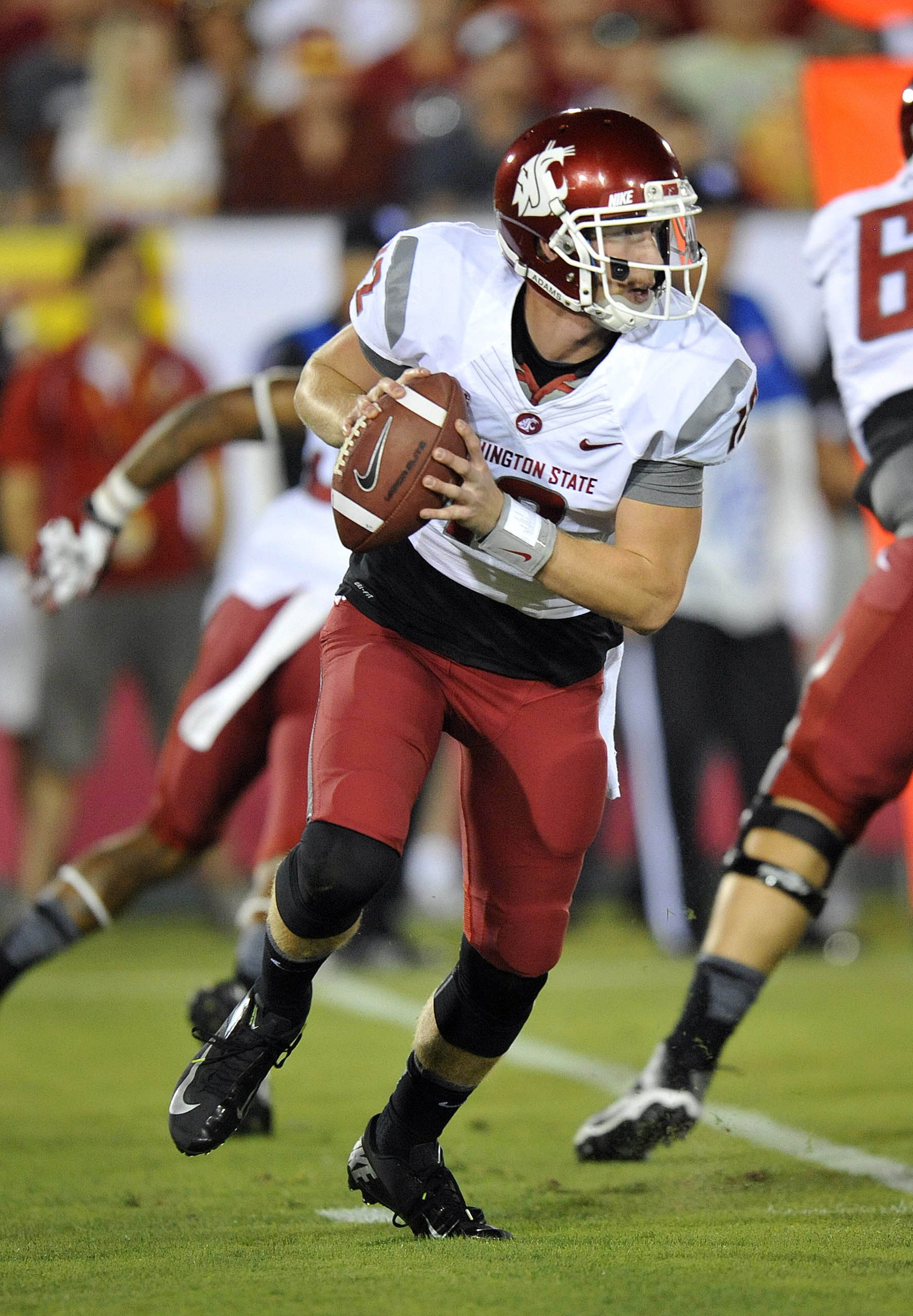 WSU's all-time leading passer knows a thing or two about playing QB. And he had advice back in July.

Unlike last year, Mike Leach elected to stick with his guy. It paid off with a victory. I don't know that you could say Halliday "won" the game in the way we like to typically characterize it for a quarterback, but you can sure as heck say that he didn't lose it.

You might remember that back in July, Alex Brink had some advice for Halliday: "Be a better manager of the game." There's a part of me that wonders if Halliday truly knew what that meant before the second half of Saturday's game. He hasn't played that much, and my memory might be faulty, but I can't ever recall a time when Halliday went a half without making a risky throw.

I suppose one could make the argument that this was more or less a function of conservative play calling*, but still, he did it against USC. And I think this is a bigger accomplishment than I gave it credit for on Saturday, when I was in the throes of emotion brought on by a tight contest.

*Yes, I know Leach typically sends in a formation, which implies a small number of plays for the quarterback to call based on what he sees, but I think it was pretty obvious from the dramatic increase in screens and slants that there was a little more than that going on in the second half.

Upon rewatching the game, I'm fairly certain that I simply did not give enough credit to just how much duress Halliday was under in that game. I think I've become so accustomed to watching quarterbacks in crimson get harassed that I hardly notice it anymore, more or less accepting it as part of the job. That, combined with focusing so intently on Halliday's decision making, led to me really only taking into account his deficiencies, resulting my immediate reaction on Saturday.

But boy oh boy did USC make him incredibly uncomfortable back there. They created a quarterback's worst nightmare: The collapsing pocket with nowhere to step up to throw. (As seen in the video above.) That doesn't excuse the poor decisions (again, as I note in the video), but it leads me to understand it a little more. And if this wasn't Halliday we were talking about -- a guy with a history of poor decisions leading to turnovers -- we'd probably be much more willing to brush these off as the product of a stellar pass rush.

Of course, this is Connor Halliday, and this is a guy with a history of turnovers. We can't ignore that. Which leads to the important question, the one that still hasn't gone away.

Is Halliday the best guy to lead this offense going forward?

I've reversed course since Saturday, when I wanted to see someone else. Halliday proved in the second half he could manage a game, and do it within the confines of the offense. Additionally, I think the potential growth that would have taken place from week one to week two was stunted by USC's relentless pass rush. And while I once thought the timing was solid -- with two cupcakes at home -- to make a change to Apodaca, I now think it's actually the perfect time to stand behind Halliday as the quarterback.

Given the gains he's already made (I know many people don't see them, but they are there), giving him the reps against a defense with bigger windows and a much more manageable pass rush in a friendly environment will do more for this team going forward than starting over with a redshirt freshman. Leach has praised Halliday's leadership since the end of last season, and while I prefer to analyze quantifiable elements when possible, it's stupid to completely dismiss the human element of this -- I don't know how much an effect last year's quarterback carousel had, but I think we all can agree that it probably didn't help.

This team seems unified in its Halliday is the guy, and Leach is making the right call to stick with him.