The Monday After: Looking back at WSU's win over Idaho

Welcome to CougCenter's newest Monday feature, wherein we look back at the game that was and set the stage for the game coming up. The defense was amazing against Idaho, while the offense wasn't all that bad itself. Let's take a quick look back at what unfolded on Saturday night.

Share All sharing options for: The Monday After: Looking back at WSU's win over Idaho

WSU's win over Idaho was never in doubt, as the athletic difference between the two teams was plain for all to see, allowing the Cougs to cruise to a 42-0 victory. And yet, it just doesn't feel like the performance was as completely dominant as I envisioned it would be. That's weird to say, given a couple of facts.

*Fun, random fact I came across in researching this: Remember that lone win in 2009 - against SMU? The Cougs actually gained two fewer yards per play than the Mustangs that day (3.9 to 6.0). WSU truly deserved to be winless that year. Thanks, Bo Levi Mitchell, for saving us the indignity! 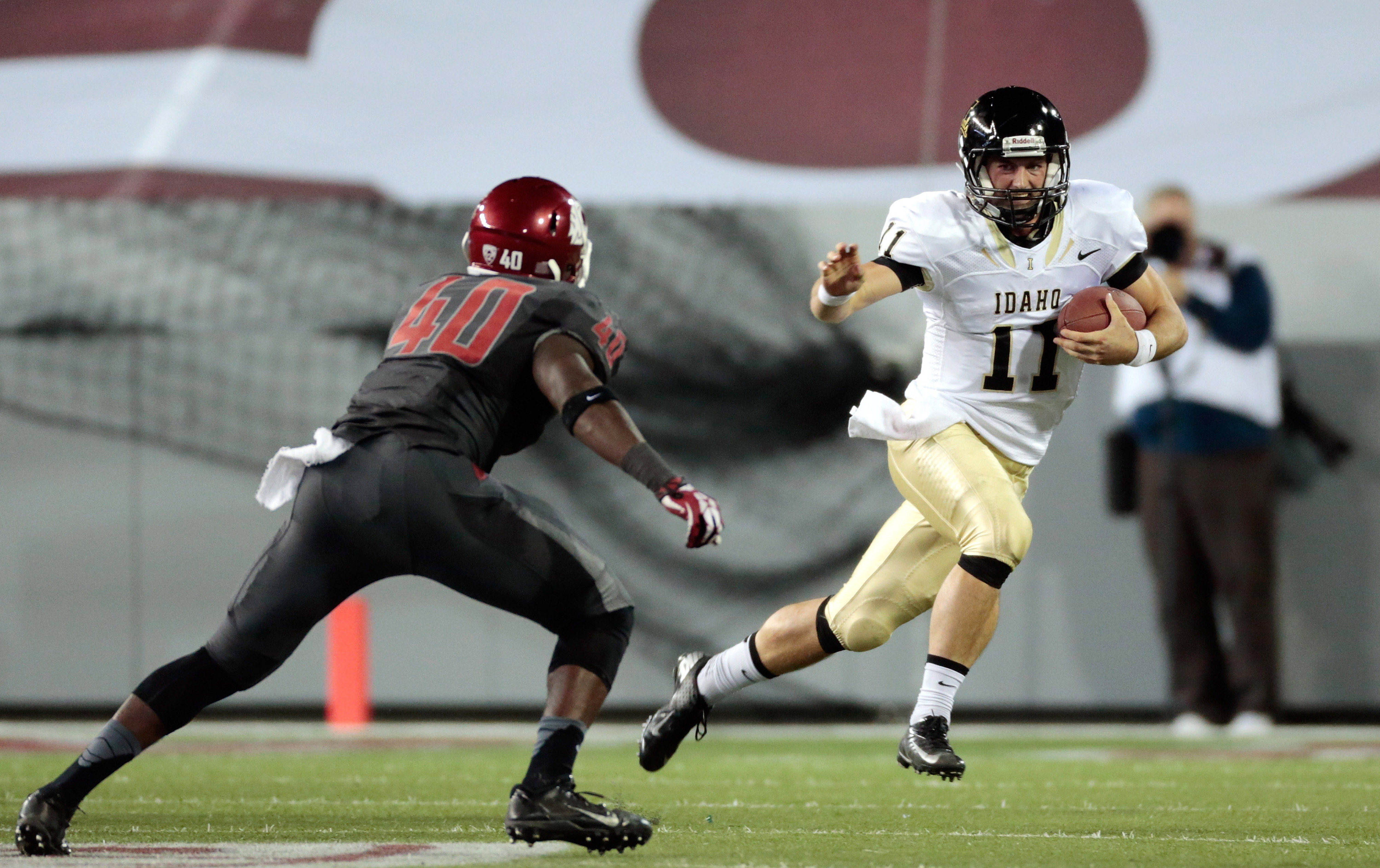 Like an Idaho QB trying to evade the pass rush, we've got you covered from all angles.

Second, it's like we forget where we've been -- I'm not sure we're in any position to look down at any six-touchdown victory.

Still, I found myself wanting ... more? I dunno. Maybe it is the fact that our school has been so terrible for so long, and we just want to believe that these guys have, in fact, turned the corner, and marching up and down the field all day on Idaho would make us feel more like that. Then again, we've been there before with Idaho State and UNLV in 2011, and that wasn't exactly a portent of things to come.

Rarely are corners turned that cleanly, with fans able to point to a specific moment in time. I'm trying to keep that in mind and just enjoy the ride.

The defense was incredible, and it's becoming clear that if this team is going to exceed whatever preseason expectations we had for it, it's probably going to be on the back of the guys on that side of the ball.

WSU held Idaho to just 3.4 yards per play on Saturday. It's the third time this season in four games that WSU has held an opponent under 4.0 yards per play. Consider:

I don't really give a crap what the level of competition is -- that's some eye-opening stuff, especially considering how much we were worrying about what the potential of this defense was after it got lit up for a number of big plays against Auburn. They have completely shut down three consecutive opponents, and they haven't done it with smoke and mirrors. They've played fast and physical.

The offense needs to eliminate the sloppiness if if wants to live up to the standard set by the defense and do its part to try and get three more wins for this team.

This goes beyond Connor Halliday, whom we'll talk about in a minute. There were a some drops, as well as a pair of fumbles -- Kristoff Williams put the ball on the ground for the second consecutive week after carrying it loosely in the open field. (Only this time, he wasn't saved by replay.)

Chances are very good that the defense is going to hold Stanford within striking distance. Can the offense eliminate enough mistakes to keep pace and pull off the upset?

Darryl Monroe was all over the place, but I'm going to go with Xavier Cooper. He regularly placed himself in Idaho's backfield, destroying the Vandals' overmatched offensive linemen. He racked up five tackles -- quite a few for a defensive lineman -- including 3.5 for loss and 1.5 sacks. He nearly had another sack, but the Idaho QB (can't remember which one it was) made a nifty move to escape.

He was as disruptive a force as any defender has been in any game this year. And you know what else is fun? He's just a sophomore!

This is an easy one. Halliday's final line looked fine. He was over 70 percent completions for the second consecutive game, and in this two-game stretch, he's thrown for 729 yards and nine touchdowns.

Of course, he's also thrown three interceptions, and frankly, he looked awful at the beginning of Saturday's game. It wasn't hard to see what was going on, as poor decisions and poorer mechanics kept the Air Raid from taking flight early on.

When he gets over his front foot to deliver a ball with confidence, Halliday is remarkably accurate, as we saw for stretches. However, it seems like he gets fouled up when he feels pressure in his face -- he often throws off his back foot in those instances, sometimes going as far as using that silly jump throw that really has no place in his repertoire. That's a scary thought: If he's doing that when an Idaho defender gets within a yard of him, what's he going to do against a team like Stanford, which is going to constantly be hanging around his feet?

I still won't go so far as to say Halliday is hopeless going forward, but I sure was hoping for a better showing in this game to make me feel better about his future prospects.

No. 5 Stanford comes to Century Link Field to take on WSU in the Seattle Game. The Cougs gave the Cardinal a run for their money a year ago in Palo Alto, and a win would almost certainly vault WSU into the top 25.

It should be a good crowd -- one that will be plenty lubed up by the 7 p.m. kickoff.

WSU beats up on Idaho in Battle of the Palouse