The Monday After: Looking back at WSU's loss to Stanford

The Cougs proved they're not quite as far along as we all hoped. Does the big loss indicate a big step back?

Share All sharing options for: The Monday After: Looking back at WSU's loss to Stanford

Given WSU's 3-1 record coming into the game -- which included a win over a pretty physically gifted USC team -- and the closeness of the Cougars' 2012 effort against Stanford on the road, many of us had high hopes for WSU's chances in the Seattle Game on Saturday night.

Heck, even the departing WSU beat writer at the Spokesman-Review bought in.

That lasted all of about three plays, or until Kevin Hogan hit Michael Rector for a 48-yard pass over the top of the WSU defense. That drive ended in a field goal, but the next two didn't -- they ended with tight end Devon Cajuste catching touchdowns of 57 and 33 yards. Meanwhile, the Cougs moved the ball a bit, but drives continued to stall out.

Then, the avalanche came. 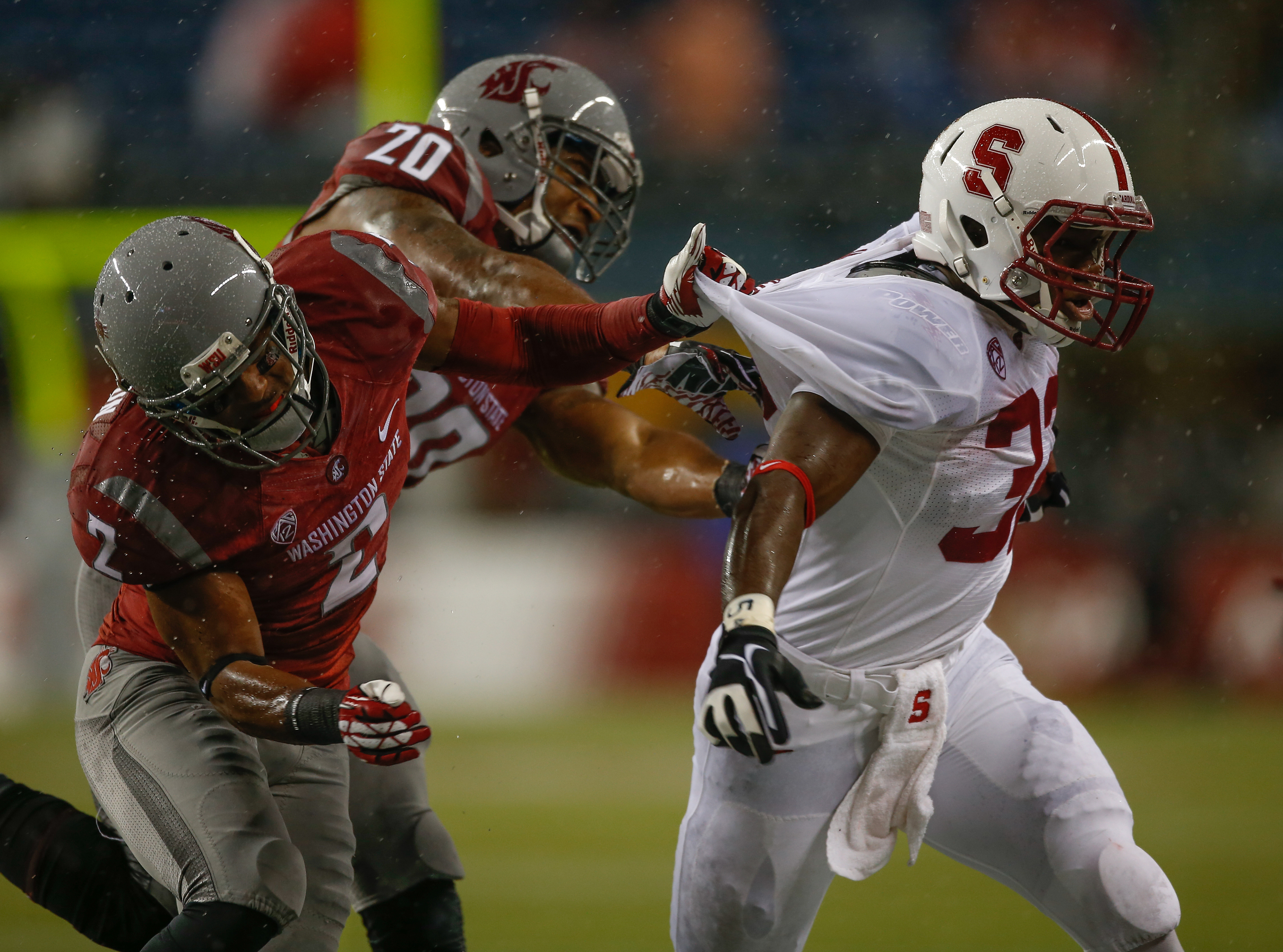 We've got you covered from all angles.

Connor Halliday's ill-advised pass into coverage with a defender in his chest was picked and returned for a touchdown. Hogan hit Rector for a 45-yard touchdown. Linebacker Trent Murphy read a tunnel screen perfectly, picking off Austin Apodaca for another pick six.

The Cardinal had scored 21 points in the span of four game minutes with only one offensive possession. And the game was over.

Given that last year's game came down to a last-minute drive by Jeff Tuel and the offense and the final margin was just seven points, a 55-17 beatdown looks on its face to fans like a huge step backward for a program that is scratching and clawing to get ahead.

For their part, WSU's players and Mike Leach didn't say that ... in so many words. But center Elliott Bosch said postgame, "At times, it felt like last year's team," and Leach made reference to individuals slipping into some old habits once the game started rolling out of control.

So, yeah, in some ways it was a step backward. Maybe that alarms you, but it doesn't really alarm me; improvement in sports is rarely a neat and tidy linear progression, and I think that's even more true at the collegiate level. One thing that struck me in the interview room was just how young some of these guys look, which led me to remember -- duh, they're college kids. They're going to screw up. A lot. And just like their real lives, their football lives are going to be full of fits and starts.

I thought for the most part we played hard from start to finish. I thought we fought hard. We didn't always fight smart. -Mike Leach

But to a man, they all expressed a feeling that this team is different and will rebound from this.

"I thought for the most part we played hard from start to finish" Leach said, the undertone of the comparison to last year's team obvious. "I thought we fought hard. We didn't always fight smart."

And then there was Bosch, asked point blank if this team has the ability to get it back on track.

No elaboration. None needed. And after seeing how this team responded to the narrow loss to Auburn, I tend to believe them.

Still, there's the nagging issue of the 38-point margin. I asked David Shaw if he thought the Cougars actually were better, despite the final score.

"Honestly, I think they're better than they were last year," Shaw said. "I think we're better on offense - I think we have more weapons. (WSU) played really, really tight to the box last year, and we didn't make them pay for it. We couldn't take those shots over the top -- we didn't have the speed, Ty (Montgomery) wasn't healthy we just didn't have the juice outside to do what we did today.

"But honestly I do believe Washington State is a better team this year than they were last year. Defensively, I think they're better, and I know their quarterback got banged up today, but I like what they're doing on offense."

I'll admit -- I vastly undersold the quality of Stanford's playmakers. The Cardinal don't just have a couple of tight end mismatches as in years past, they've got a couple of guys in Rector and Ty Montgomery who can legitimately take the lid off the defense. And when the Cardinal came out throwing the ball from the start, they were able to take advantage of a WSU defense that was clearly geared up to stop the run first. Damante Horton, Darryl Monroe and Deone Bucannon each expressed some degree of surprise at Stanford's strategy.

Stanford clearly is better than it was when WSU played in Palo Alto a year ago, and sometimes when you get caught up in a barrage with a young team the way the Cougars did, it's hard to stem the tide against a talented, mature team. Because of that, I haven't changed my opinion of the team going forward.

I still like their chances to pick up two -- and maybe even three -- more wins.

The defensive front still was stout against the physical Cardinal. Sure, they were missing David Yankey, but just about any of their backup offensive linemen would start right now for the majority of the conference. The final box score looks plenty ugly, but through three quarters, Stanford running backs had gained just 75 yards on 22 carries -- 3.4 yards per carry.

Washington State, especially on their defensive side, they played physical. And our guys are feeling it. -Stanford coach David Shaw

Now, some of that indeed had to do with WSU selling out to stop the run. I remember expressing amazement on one run early in the game at Taylor Taliulu being the first guy to hit the back, just two yards across the line of scrimmage. The Cougars were pretty much begging Stanford to try and beat them over the top.

However, if there was any doubt about the ability of these guys, that's now firmly put to bed.

"It was a physical game out there today," Shaw said. "Washington State, especially on their defensive side, they played physical. And our guys are feeling it. We have some guys who are beaten up a little."

The back end of the defense, though ... not so good. Nolan Washington was burned so regularly that he was benched in favor of true freshman Daquawn Brown. Damante Horton was beaten badly on the pass that ended up being intercepted by Deone Bucannon. Taylor Taliulu got beat so often that he's going to get his own special section in a minute.

I don't believe these guys are as bad as they looked on Saturday -- I do think there's something to having a game plan and then having your opponent do something unexpected. I also don't believe they are as good as what they showed against USC, Southern Utah and Idaho, which had a lot to do with quarterback ineptness and/or pressure by the defensive front.

I believe the truth is somewhere in the middle, and if WSU is going to pick up a win against Cal -- a seemingly critical result if these guys want to make a bowl game -- the secondary is going to have to play much, much better. 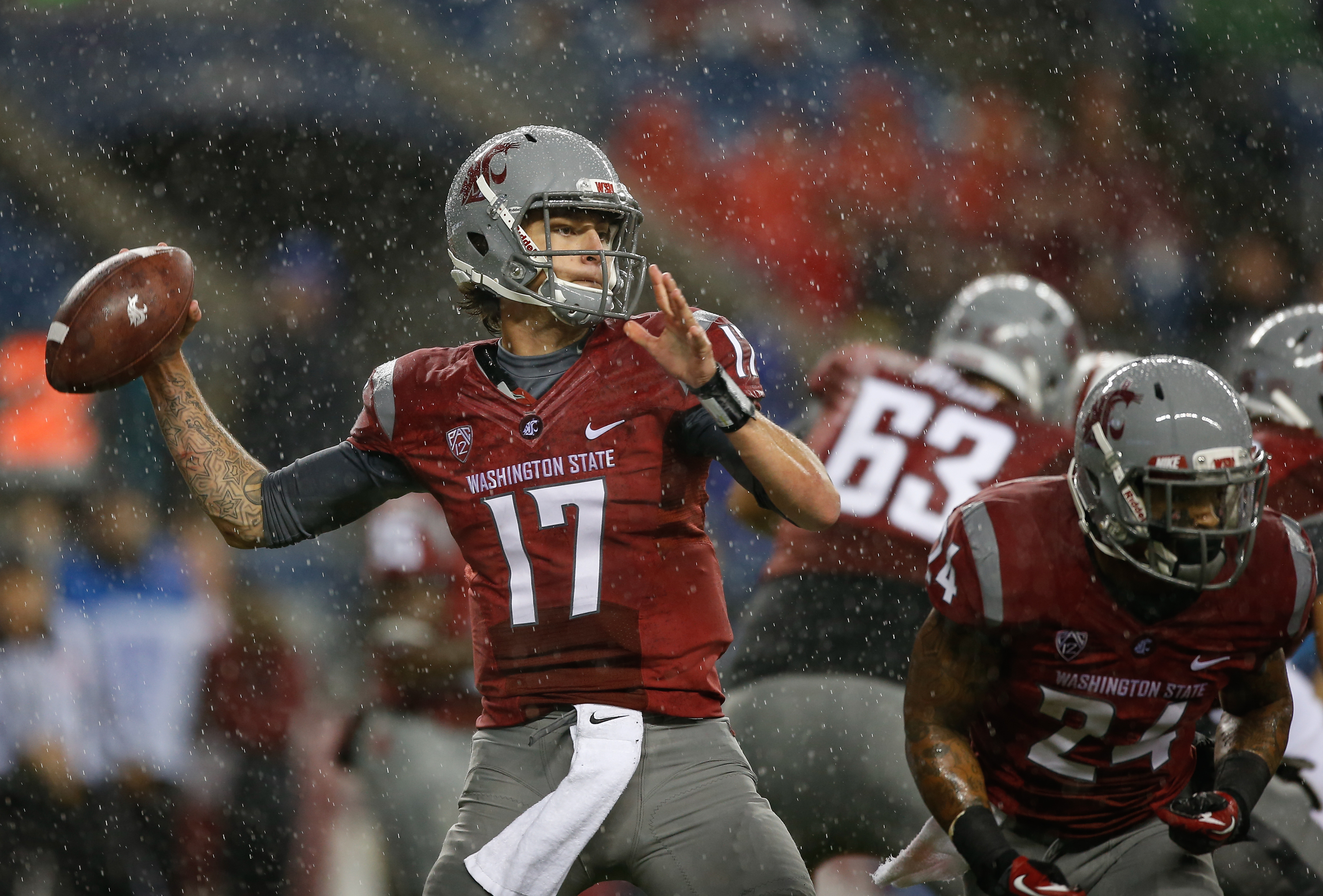 Austin Apodaca was solid, given the circumstances.

Frankly, I'm shocked there hasn't been more conversation about the play of Austin Apodaca and whether he should start on Saturday in place of Connor Halliday, regardless of whether Halliday is injured. I'm not saying he should, I'm just surprised there isn't more debate. Maybe people are too busy arguing about the existence of the Seattle Game. Maybe people turned the game off early.

Personally, I was incredibly impressed by what I saw out of Apodaca. He had a rough start, getting drilled in his ribs by Kevin Anderson on his second attempt after replacing Halliday, then throwing that pick six. But he eventually settled in, finding a rhythm that allowed him to finish 15-of-29 for 138 yards and two touchdowns. He was 9-of-10 on the final drive, which included that awesome scramble drill that ended with Rickey Galvin's first touchdown catch of the season.

Once he settled down, Apodaca looked in control of the offense. Granted, it was against Stanford's backups, but still -- the physical tools were plain to see. He's got an easy throwing motion with plenty of zip on the ball, and he's accurate. His mobility in the pocket is an asset, and it's fun to watch a quarterback whose habits haven't been affected by years of poor line play in front of him. He actually stepped up into the pocket a number of times to deliver a strike, rather than reflexively run backwards at the first sign of trouble.

Halliday was pretty good up until the interception, and if he's healthy, he should start against Cal. Halliday gives WSU the best chance to win. But if he can't go, I feel surprisingly comfortable with Apodaca at the helm.

Honorable mention: Destin Vaeao, who did some cool stuff from the Buck position.

I won't dwell on it, but Taylor Taliulu has to be better. It's tough to know exactly what the responsibilities of individual players were on each play, but it seemed pretty clear that the strong safety was burned more than once. Remember that this is a guy who played heavily at the beginning of last season before being buried on the depth chart; one has to wonder if these kinds of mental mistakes were part of what was going on.

The Cougs travel to Berkeley, Calif., to take on the Cal Golden Bears, who are now 1-3 after dropping their conference opener to Oregon on Saturday. Things have been a little bumpy under first-year head coach Sonny Dykes, who was an assistant under Mike Leach at Texas Tech. The Golden Bears also have losses to Northwestern and Ohio State, and their lone victory was over Portland State, which they needed a fourth quarter comeback to achieve.

If WSU has hopes of gaining bowl eligibility this year, this is a game the Cougs need to win, despite the fact that it's on the road and they rarely seem to play Cal well.

Kickoff is slated for 1 p.m. on Fox Sports 1. If nothing else, it should be entertaining as these two teams figure to combine for 100-plus passes between them.