WSU Football fans have a curious habit of constantly talking about the future. For several years, a major part of conversations on the future has been the football operations building. The FOB is has been touted as the missing piece of the puzzle that would allow WSU to compete with other conference schools and bring high-level talent to Pullman. On Tuesday, Bill Moos opened the doors to the future of Cougar football by giving the press -- which included me -- a guided tour of the FOB.

The above gallery gives you a few shots I took of some of the rooms and decor in and around the building. However, it is truly difficult to do it justice. Almost all of the rooms have huge windows that overlook either Martin Stadium or Rogers Field. The rooms are spacious and compartmentalized for very specific functions. As Moos stated during the tour, "This is a very functional building; we didn't miss much in that regard." Moos says that he and senior associate athletics director John Johnson visited schools from all different conferences and cherry picked the features they like in each when planning the FOB.

The Cougar decor that is on almost every wall of the FOB gives an aura of greatness to strive for on the part of recruits, players, and coaches alike. There are many spaces for placards to honor past players that have won awards at the national and conference levels. There will also be a wall (not yet completed) with the helmet of each NFL team with the name of Cougs that played for that team listed below it. It's hard to imagine that a building could be designed around a motto, but "Honor the past, live the present, create the future motto" really comes to life in the FOB.

Here is a breakdown of what I saw around the building and on each of the five floors: 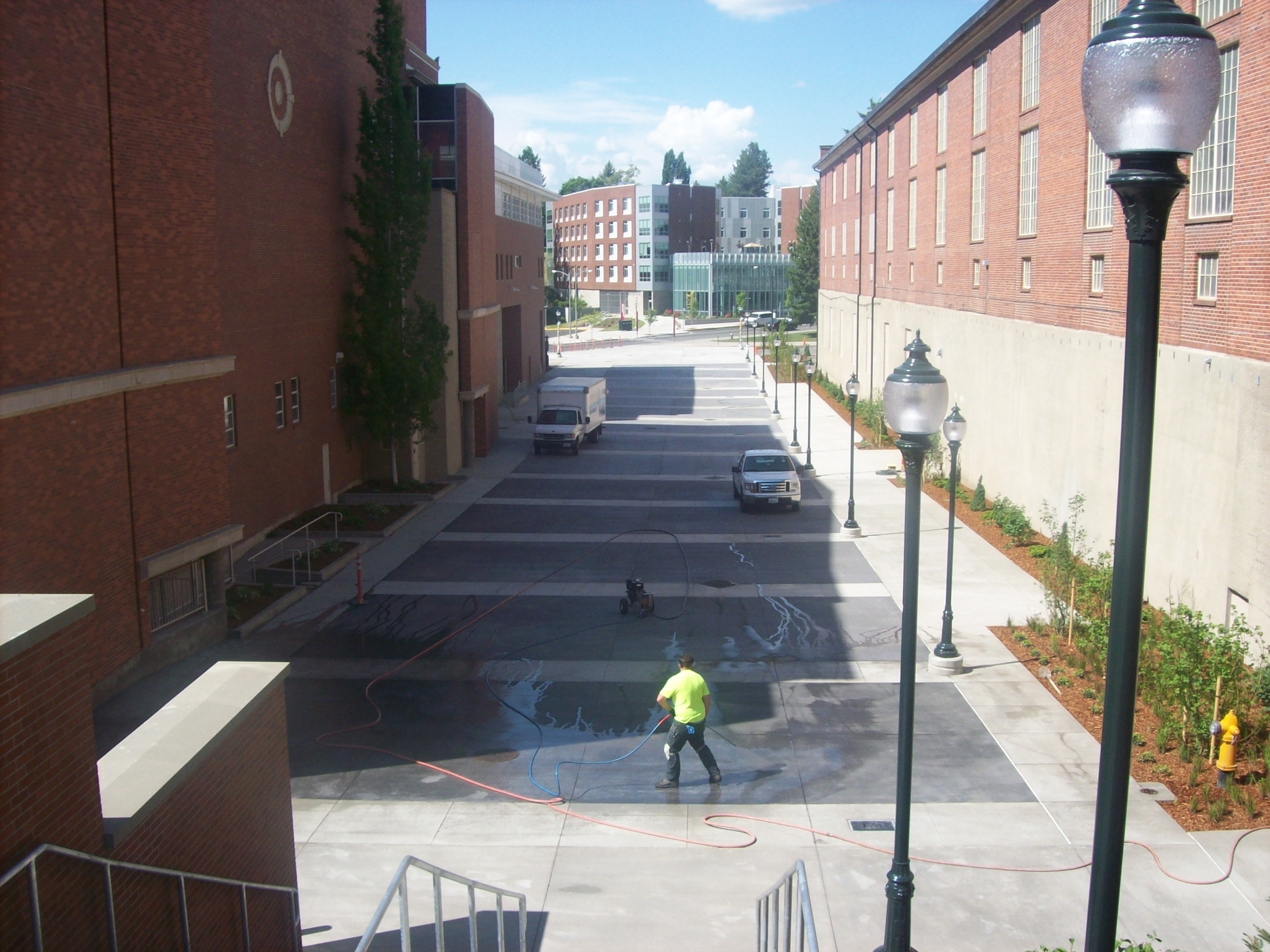 New space has been created between Bohler Gym and Hollingberry Fieldhouse for people to pass through. On gamedays, this will become a student annex with big screen TVs and other amenities for students to congregate before the game and during half time. It is meant to replace that walkway between Smith and Bohler gyms that students have used for years.

One of the biggest complaints coaches from other school have about playing at WSU is the long walk from Bohler gym to the northwest tunnel of Martin Stadium that leads to the playing field. The FOB does absolutely nothing to accommodate opposing teams. Visitors will still have to walk from Bohler and enter through the traditional tunnel, but will now have the tunnel to themselves.

Beside the visitors tunnel is a large spaced designated for equipment and to receive deliveries that will be made through the northwest tunnel. The new equipment storage area makes up nearly a 300 square foot upgrade from the previous one. 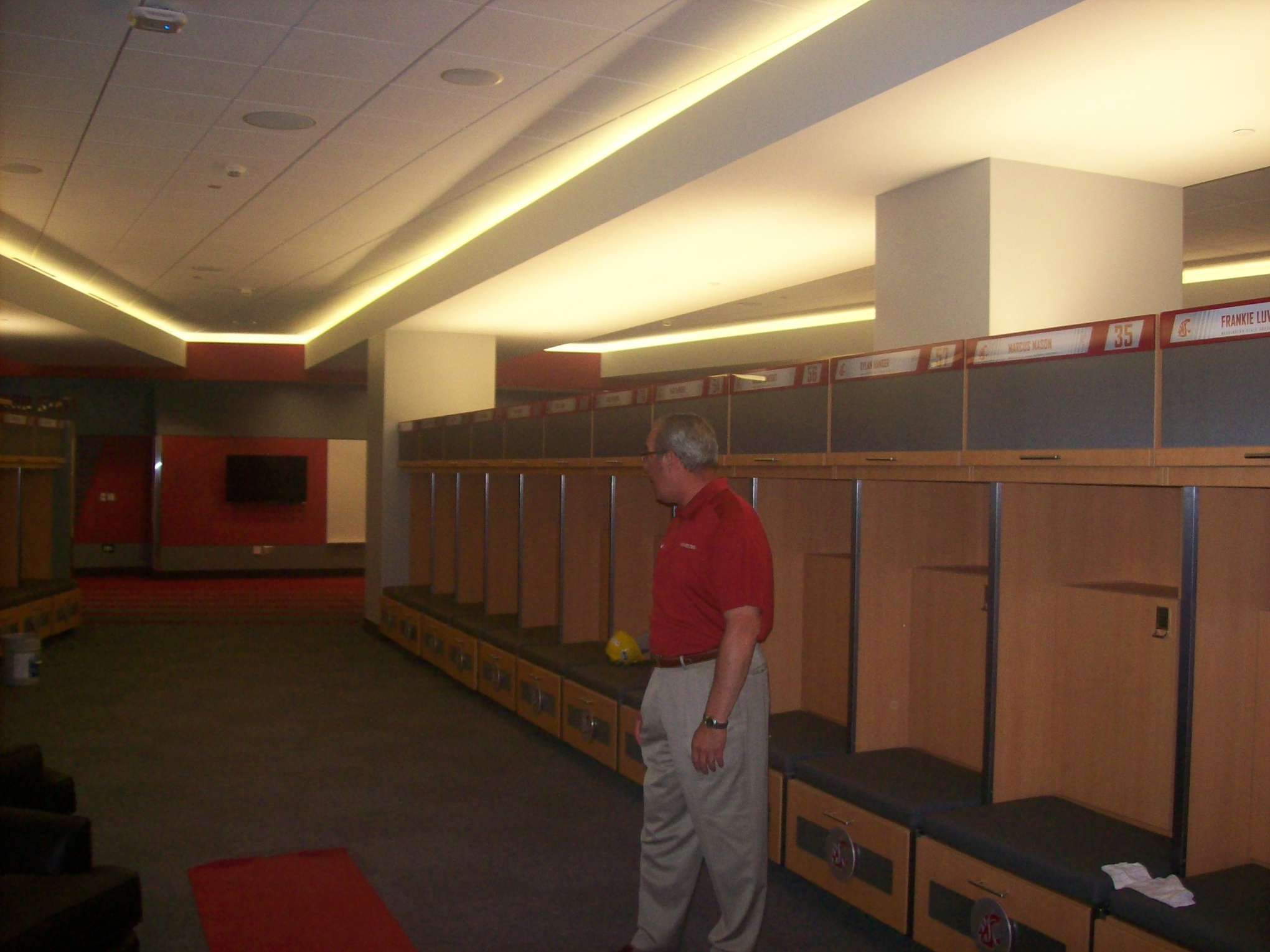 On the south end of the first floor is the Cougar locker room. According to Moos, the locker room has everything one would find in big schools across the country and the NFL.The lockers are spacious with large drawers underneath them. They also have ventilation systems to air out sweaty equipment.

On the south end of the locker room is a large dry erase aboard with televisions flanking the sides of them. Mike Leach will have ample space to make his halftime adjustments. Conjoined to the locker room is a room with a plunge tub for players to soak after practice and games.

The inspiration for the locker room was taken from a visit to Oklahoma State University. So, apparently, it is similar to one that T. Boone Pickens might buy.

The Cougars will now make their entrance from the south end of the stadium directly from their locker room. There is little space for the players to walk and actually be able to take a seat to listen to a coach's speech or go to their locker. The new entrance is very short and has a canopy with the Cougar logo on it.

The Crimzone is designed for students designated by the school as passionate fans to sit in the west end zone. In total, it only appears that a few hundred students will actually fit in the Crimzone. But the idea is that their noise will be trapped in by the FOB and project onto the field. If you can notice from a picture of the boundary of the end zone, the Crimzone is very close to the actual playing field. When determining how close to put the student seating to the actual playing field, Moos and Johnson made it so that the boundary was only inches from the minimum requirements mandated by the NCAA. When Cougs score touchdowns, they will be able to do "Lambeau Leaps" into the stands. 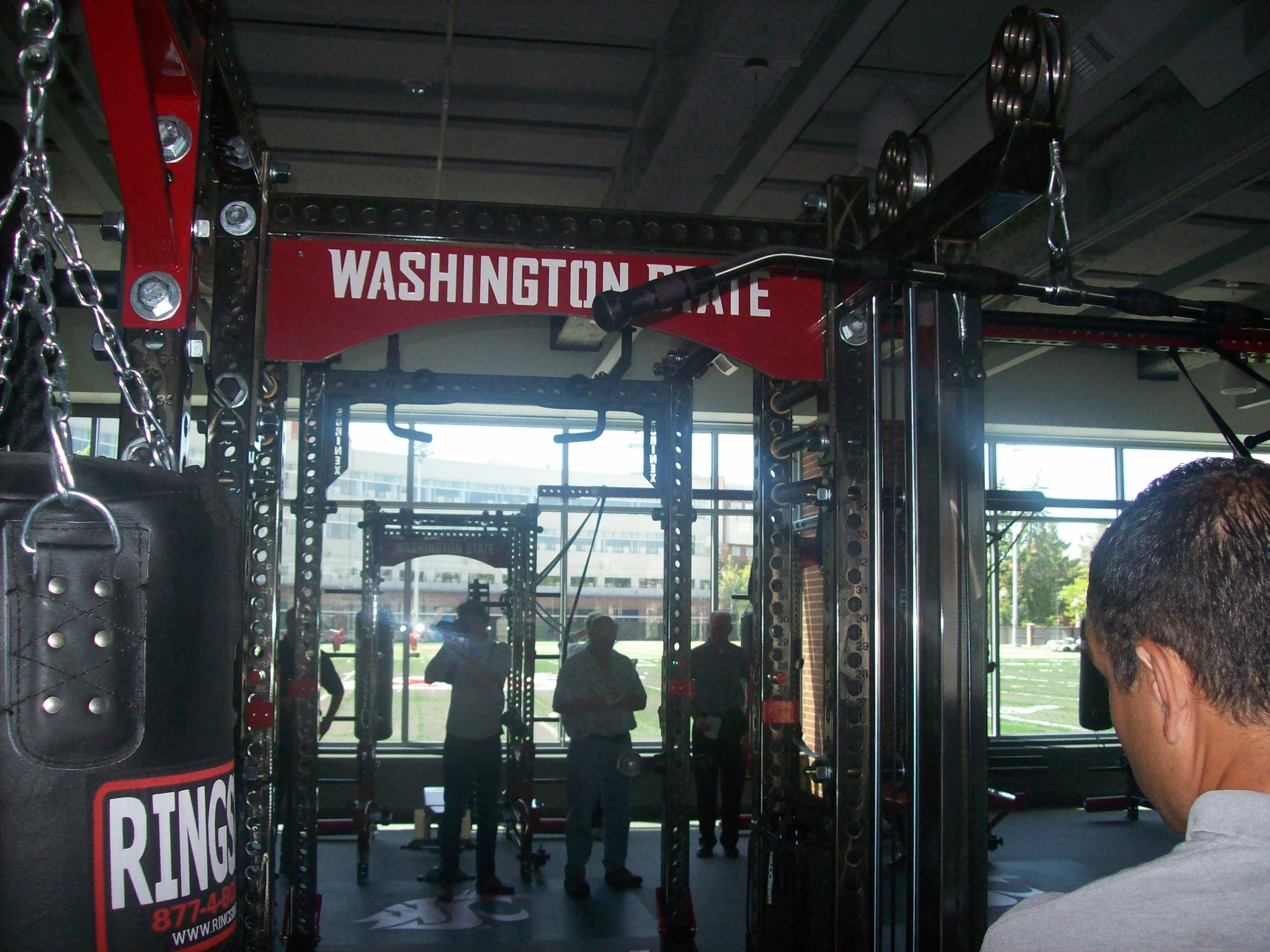 It is typical to have weight rooms on the first floor of any building to avoid the crashing noises of players dropping weights onto the floor. However, Moos wanted to have the weight room evenly aligned with Rodgers playing field to level out the training facilities. Because Martin Stadium was lowered from ground level to accommodate more seating in the 1970s and the locker room needs to be level with the stadium, the weight room was out on the second floor of the FOB. Consequently, the floor is a large slab with more than four hundred springs between it and the next floor to absorb the noise.

The weight room is almost as wide as the building itself, with lifting stations and presses stretched from wall to wall. Each of the main lifting stations has a punching bag hung from it. What is most impressive to me about the weight room is that both Martin Stadium and Rogers Field can be seen. The players can get in their reps while taking glances at the actual playing field where their conditioning will be put to the test.

The third floor runs parallel to the new walkway where students can crossover from Colorado Street to the stairways and elevator leading to the CUB.That student you see walking across the walkway is Darryl Monroe. He's from Florida.

Visible from the walkway is a "Wall of Honor." There will also be a special space designated along the wall for the Apple Cup trophy to rest in the years that it is in Pullman. In bad years, there will be a silhouette of the trophy to serve as inspiration for players to bring it back to its rightful place.

The sports medicine trainer's room with state of the art hydrotherapy and equipment is beside it. Athletes from other sports will also have access to the sports medicine facility. Let's hope this room stays relatively quiet.

There are several meeting rooms across the floor that are designated for certain positions. In the slide show above, you can see a quick shot that I took of the running backs room. Each room has places for placards for individuals that have attained success at the position in the past. 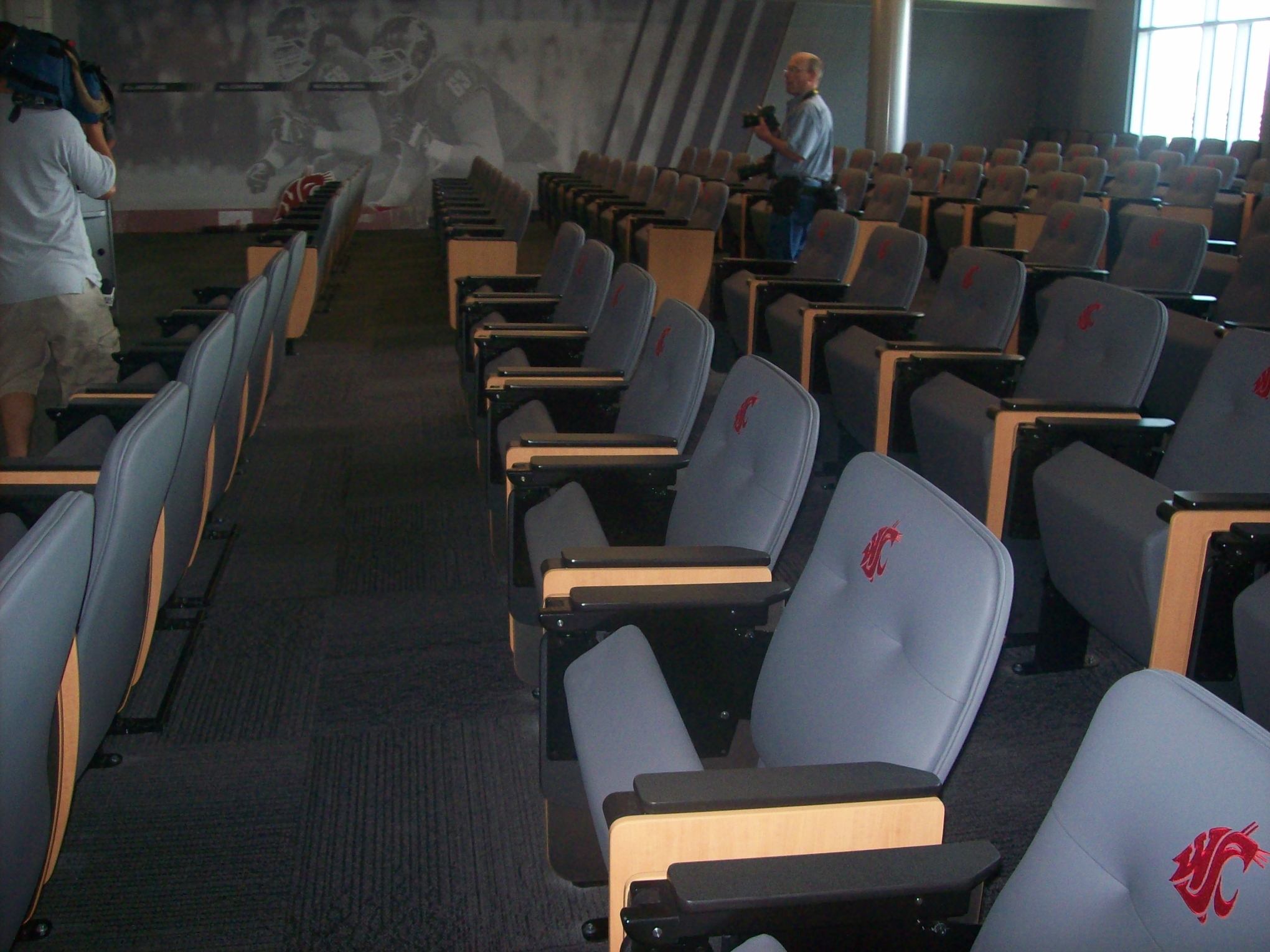 The fourth floor also has a 163-seat auditorium that can be used for large team meetings and press conferences.The seats are large and plush to accommodate the 300 lbs plus lineman that Mike Leach will be continuing to land.

Finally, the fourth floor is home to the Grey Letter Club dining hall where the players will be eating their meals. Moos noted that with relaxed NCAA restrictions on dining, players will be able to eat up to three meals a day there. Other athletes will also have access to the dining facility that will feature European chefs preparing foods aimed at fueling high caliber athletes. Moos made it clear he is adamant about nutrition stating that, "You cannot build championships on fast food."

On the wall of the dining hall is a mural of All-American football players that have played for WSU through the years. You might recognize one of those players even if you haven't been following WSU football for decades. Deone Bucannon was nationally recognized just in time to be included.

The fifth floor is the coaching floor and features several offices including the head coach office that is on the north end. Adjacent to what will be Leach's office is a large conference room. Each office overlooks Martin Stadium. On the other end of the floor is a nice "break room" equipped with a refrigerator and dishwasher for coaches to brown bag and prepare their own meals.

In the coming days, I hope to discuss in more detail what the FOB means for the future of Cougar Football and other WSU sports. For now, I just tip my cap to all that had a hand its design and building. It is truly hard to do it justice in words and a few photos.