The start of Pac-12 play saw a dip in WSU's receiver numbers.

This is the fourth year I've tracked WSU's wide receivers and every year, the start of conference play is a punch in the face from reality. It's easy to post lofty numbers during the non-conference portion of the schedule, but they always take a dip when conference play begins. That was the case again this week.

At the end of non-conference play, the WSU wide receivers were averaging 9.0 yards per target and 2.0 yards per route. It was glorious. Those numbers don't look as shiny now. Oregon has an athletic defense, but this week still stings a little.

The 1.4 yards per route isn't a terrible number, even if it is well below the season average before the game. The real problem is that 6.6 yards per target. That is simply not an efficient enough number for WSU to win high-scoring games. Based on that number alone, I'm a little surprised WSU managed to score 31 points. Part of that was a great contribution from the running backs, especially Jamal Morrow who averaged 13.2 YPT on six targets.

WSU's inside receivers -- especially the H -- have struggled this season, but the biggest issue against Oregon was the outside guys. Vince Mayle and Isiah Myers combined to average just 4.5 YPT on 23 targets. Take out Mayle's long reception late in the game and they averaged 3.1 YPT for the first 55 minutes or so. Myers came back to earth after torching Portland State. His numbers aren't as bad as they appear though. Three of his targets were on uncatchable throws while another was missed pass interference. Even still, he struggled against the Ducks. Mayle continues to put up lackluster YPT numbers while posting good YPR figures.

There was some good for WSU. Dom Williams caught all five of his targets a nice change from the 55.6 percent catch rate he ran the first three weeks. Five targets, five catches, four first downs, two touchdowns. Good effort from Dom.

River Cracraft had another River Cracraft type of game. Caught most of the passes thrown his way, converted a good portion of them into first downs. His catch rate was well down from his season numbers, but he still managed to post above average YPT and YPR numbers. Nice to see Rickey Galvin with a very healthy 8.3 YPT on six targets.

Oregon has a very fast defense, limiting some things WSU does and this wasn't Connor Halliday's most accurate game. We'll see how these numbers trend next week.

The season numbers dipped a bit with the rough outing, but remain very good overall. Dom Williams has only been targeted 23 times, so I still don't trust his totals, but they remain of the eye-popping variety. Cracraft is so dang steady. Just a consistent above-average contributor every time he steps on the field, regardless of opponent.

Of the six wide receivers with at least 15 targets, Cracraft, Williams and Myers remain above average in YPT and YPR. Mayle is a bit below average in YPT, but well above in YPR. Galvin and Lewis are on the low side in both categories.

Green's are less than impressive, but he's yet to be used as a downfield threat. Most of his targets come behind the line or near the line of scrimmage. He's averaging 7.6 yards after catch per reception, the second-highest number among the wide receivers with 10 or more targets. Dom Williams leads the way in that category. 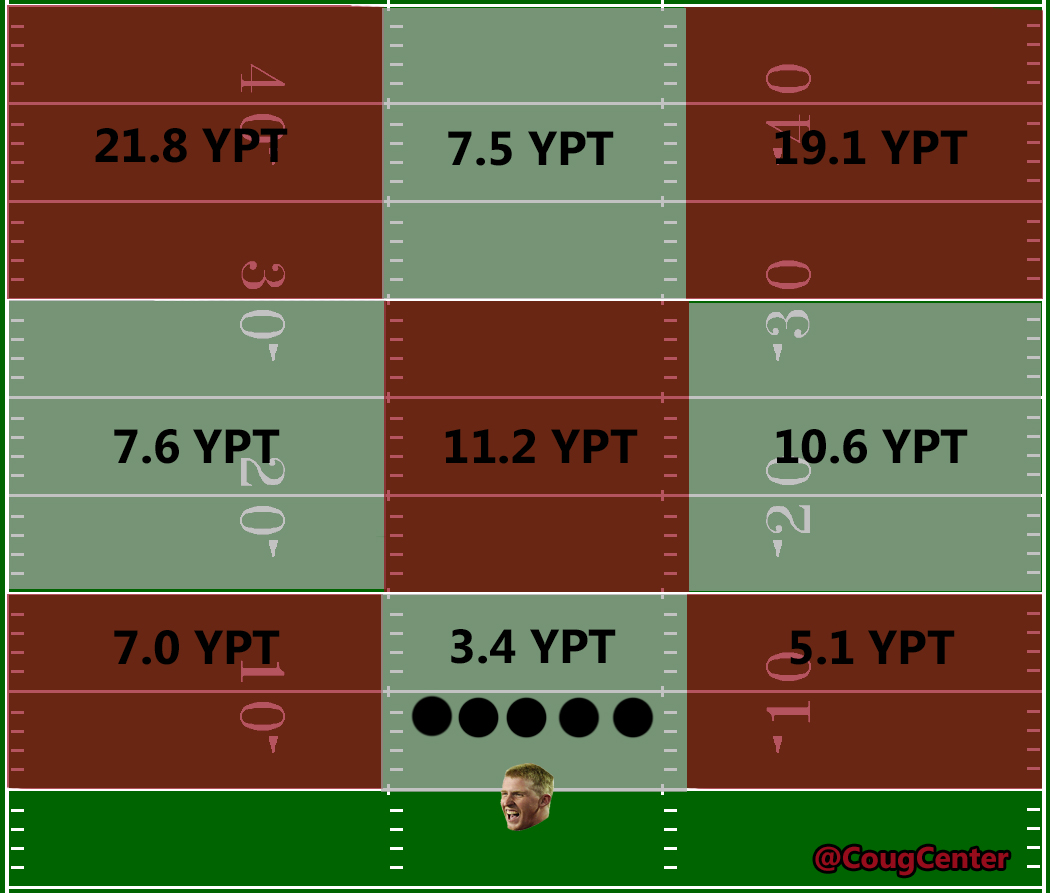 Not a ton of success deep middle yet, but these numbers look good overall. The short middle is deflated some by the jet sweeps the Cougars run where they start a few yards behind the line of scrimmage. Not a lot of dink-and-dunk 4-yard gains, no matter what Rod Gilmore tries to tell you.

WSU vs. Oregon: Cougs can't close the deal against No. 2 Ducks