WSU up big passing totals against Rutgers and advanced numbers are even more impressive.

We're only a few hours away from WSU kicking off against Nevada, but before we fully turn our attention to Week 2, I'm going to sneak in one final thing from Week 1. I've tracked WSU's wide receivers in the past and am back this year, but with even more data.

Before we get to the piles of data, let's go over a little bit of what you're looking at. The first table is a breakdown on how the wide receivers (note: running backs are not included) performed on a per target, per snap and even a per route level. Yards per target (YPT) is one of the big numbers I'll mention. That's simply the number of yards gained divided by the number of times a pass was thrown to that player. We want to see numbers 8.0 above with 10.0 and above an elite level of production.

You'll also see yards per route (YPR) which is the number of yards the receiver gained divided by the number of pass routes he ran. If he's on the field for a pass play, it counts as a route. That means sacks and quarterback scrambles are included. If you're wondering what the difference between snaps and routes is, snaps is the total number of plays on the field including running plays. There isn't very much college data on yards per route run. Based on NFL standards, 1.5 YPR is around average. Anything 1.8 YPR and above is very good. Dipping below the 1.3 YPR range is less than ideal.

As the season goes on, we'll add a season table in addition to the weekly numbers. We're still dealing with very small samples and there could be some significant fluctuation early on. This post will come earlier in the week moving forward, assuming I don't accidentally erase the completed spreadsheet again. If you have any questions, feel free to ask.

With that, let's get on to the Week 1 receiver table.

Giddy up. The wide receiver production against Rutgers was a thing of beauty. The two freshman, Robert Lewis and Calvin Green didn't get much going -- Lewis wasn't targeted in four snaps -- but all of the returners performed very well. This is the sort of table I'd expect to see against Portland State. So either Rutgers is a complete disaster defensively or they hype around WSU's receivers was very justified.

The team numbers are just perfect. Topping 72 percent catch rate and 10.0 YPT and 2.0 YPR? I'd like to take those numbers out to a nice steak dinner. Vince Mayle averaged an absurd 3.88 YPR with Isiah Myers' sitting at 11.75 YPT and 3.13 YPR. Myers hasn't always looked very good on a YPT level, but he smoked Rutgers.

River Cracraft picked up where he left off last season. He caught eight of nine passes and produced 9.22 YPT. He was on the field a ton, playing 57 of the 61 Y receiver snaps. It's no surprise to see the outside receivers putting up big numbers, but WSU's inside receivers have been a weak point in recent years. With Rickey Galvin and Cracraft combining for 169 yards on 15 targets, it's no wonder WSU moved the ball so well.

If we're going to look at the negative, WSU dropped six passes. Drops can be highly subjective and I'm probably a harsh grader. If a ball is on target and the receiver gets two hands on it, it's usually tracked as a drop. On a more lenient scale, the number might be four drops. Even that number is high. Dom Williams dropped two balls, both obvious drops. He did break free for 64 yards on his only catch, but not his best game.

Halliday played extremely well against Rutgers. He completed 40-of-56 passes, but six of those incompletions were drops, one was a throwaway and one was batted down at the line. That means he completed 40-of-48 directed targets. Absurd. He had three balls I tracked as poor/uncatchable throws.

He spread the ball all over the field too. Of his 55 intended passes, 18 went over the middle, 24 to the left and 13 to the right. He didn't throw deep often with just six targets beyond 20 yards. He did, however, connect on three of those six attempts, getting WSU big chunks of yardage. Halliday made a killing on medium throws between six and 19 yards. On 23 medium attempts, he racked up 297 yards. Here's a visual of how the Cougars fared based on target location. This includes all 55 directed passes, including those to running backs. 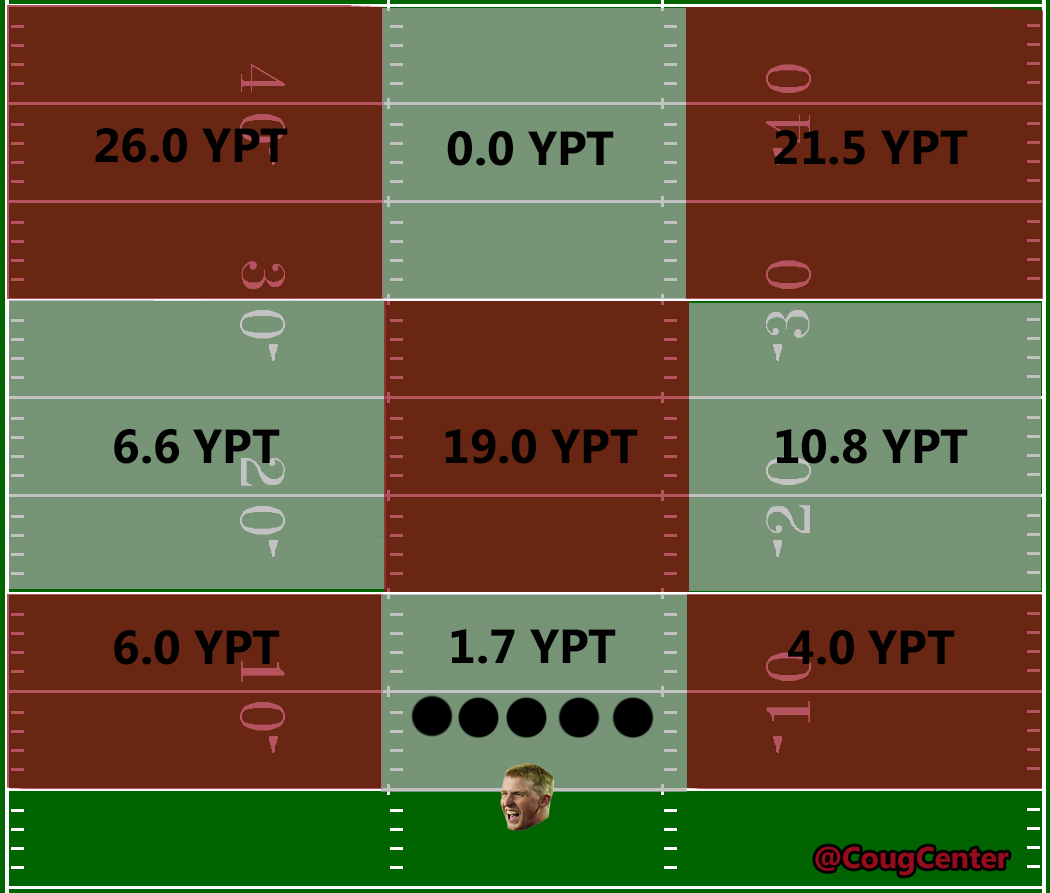 This is just the tip the iceberg of the data we're going to dive into this season. If you have questions, feel free to ask away in the comments and I'll answer what I can. For example if you were curious of the average target depth of Mayle's 16 targets, I could tell you it is seven yards.

Oh, one last thing since this often comes up. If anyone is concerned that this data might help an opponent 1) they all do the same thing -- and probably much better -- and 2) there is no guarantee I didn't deliberately include incorrect data. They won't even know what hit 'em.