Monday's press conference gave Coach Leach the floor to advocate for his signal caller. He also offered insight into WR Gabe Marks' head after his game-winning catch, and how the defense is getting it done.

FROM PULLMAN -- What could be sweeter than a last-second road triumph over Jim Mora and the 18th ranked Bruins? Not much. The win almost provoked a smile from my favorite pirate (sorry Black Beard).

For the first time in nine years the Cougars are nationally ranked. WSU is ranked No. 23 in the USA Coaches Poll and No. 24 in the Associated Press’ top 25. Here are a few things that stood out in WSU football's weekly news conference with the assembled media, which included interviews with Mike Leach (full video above), wide receiver Gabe Marks, linebacker Peyton Pelluer, and safety Taylor Taliulu.

The Cougars are ranked, but they aren't satisfied.

Each person that answered questions at the podium Monday had the same mentality: There's more work to do. It did not matter to Coach Leach that WSU is ranked. The message was clear -- who cares if we are ranked?

"It's just something that we have to avoid the noise on. Just focus on the next practice and the next play," said Leach. "This isn't a where you want to be business. You could be undefeated but you can still improve."

His players have adopted the same philosophy and expectations on reaching the top 25. Only Pelluer opened up about the teams success.

"I'm hoping these teams are learning that we aren't just irrelevant. That we will punch you in the mouth and outplay you," said Pelluer. "The only ranking that matters is the one at the end of the year."

And that is exactly what this team has done. Even though they have been punched in the mouth this season (better than kicked...sorry Ronda), these players keep fighting and are still hungry for more.

Leach believes Luke Falk should be awarded the Heisman trophy 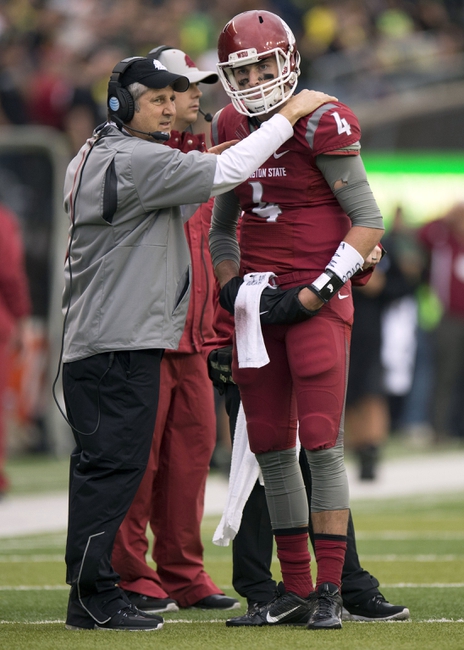 Thanks to stellar play and wins to go with it, Luke Falk has generated some Heisman buzz. In today's presser, Leach said Falk deserves the attention he's receiving and expressed displeasure about how the award's winner is selected.

"We are happy that he gets that recognition. All awards are team awards. Luke's not even in that conversation without the contributions of offensive lineman, running backs, and receivers. And also some stops on defense," said Leach.

When asked if Falk was worthy of a Heisman Leach quickly responded "no question". Then he went on to state that the Heisman was political.

"Now (the Heisman) is just the bi-product of trying to speculate who's the best player of the national championship team. ... But failure to do that, then I think you ought to go back to the original definition which is who's made the greatest contribution to his individual team," said Leach. "If that's the case then virtually everyone needs to vote for Luke Falk. And anybody that doesn't needs to re-examine why their voting for the Heisman to begin with".

As soon as he said it, Leach knew it was a great quote. And heck yeah it is. Why shouldn't he get his guy face time? Falk is having an incredible year and is incredibly important to this team. He deserves recognition and so does Leach for getting this team here.

Colorado continues their tough end-of-season schedule against what will be the Buffs' fourth ranked opponent in a row (UCLA, Stanford, USC, and now Wazzu). Despite the difficult schedule and the 4-7 record that goes with it, the Buffs have played some of the Pac-12 heavyweights really tough. Last week they lost a close one to the Trojans, 27-24, and three weeks ago they fell to UCLA by four points. This Colorado team has to be exhausted and coming to Pullman facing a relentless defense and high-powered offense isn't going to help.

But Leach and the gang know that Colorado is going to test them.

"A lot of these games have kind of been by an eyelash, but they have been close on the same people we've been close on," said Leach. "I think they're dangerous. I think they play real hard and they do some good stuff. They're explosive on both sides of the ball. Offensively they move the ball all over the place they got a little razzle dazzle to them."

Last season, the Cougar defense lacked a identity and underperformed. These players believe in Coach Grinch and the results show on the field and at the podium.

"I know they are going to come in here and play us hard. I think they really want to finish a game and with the head of steam that we have they want to halt us in our tracks," said Pelluer. "We aren't going to let that happen."

Tailulu has seen this defense grow under Grinch due to his mindset and confidence. He expects the Cougar D to play their game and fight for 60 minutes.

"Coach Grinch will give us the game plan tomorrow," said the safety. "I think he has proved to everyone he knows what he is doing."

Michael Bumpus' record has been on Gabe Marks' radar.

"I've been eyeing that up for a long time. That was kind of my selfish thing," said Marks, who became the WSU all-time career receptions leader in Saturday's win. "I was trying to get that for a long time. I've been chasin' Bumpus for years.

Bumpus sent Marks a congratulatory message after the record was broken. Marks is only a junior and could continue to add to his record next season, if he returns to school. Marks also tied the WSU record for touchdown catches in a season in the win, with 13. With three games left on the schedule, former Cougar wideout Jason Hill might as well start recording his video to send to Marks.

Mike Leach loves Taco Trucks but would pick Jimmy Johns if he had to eat fast food.

And with that I am going to go find a carwash that hopefully has a taco truck near it.