Catching up on WSU spring football at the halfway point

Here's what you've missed if you haven't been closely following the practices over the past few weeks.

Share All sharing options for: Catching up on WSU spring football at the halfway point

The 2015 edition of WSU spring football is about half over, and while some people pay close attention to the day-by-day happenings -- or, more accurately, every-few-days-by-every-few-days happenings -- I imagine many of you are like me, finding yourselves unmotivated to get worked up over the results of any individual practice. Coaches try a lot of different things with personnel and scheme, so what happens on one day might something ... or it might be nothing.

But after a couple of weeks, one can see some trends start to take shape through the reporting of the Spokesman-Review's Jacob Thorpe, who does a great job of passing along interesting tidbits. Here's what you've missed.

No, you don't have a replacement for Connor Halliday yet

If you were tremendously impressed by the job Luke Falk did after Halliday's injury and presumed he'd be your starter in 2015, you could still be right, but Falk's going to have to earn it: He and redshirt freshman Peyton Bender are in the midst of an open competition in which they are splitting the reps right down the middle. And to this point, neither appears to be clearly outplaying the other.

Now, what I'm about to show you is admittedly pretty stupid and about 98.68 percent meaningless, and it's entirely reliant on Jacob Thorpe's tracking over the past five practices (he missed the first two while following around those twerps from Spokane who were playing in some big deal basketball tournament). But hey, we're bored, so why not aggregate spring practice stats?

Both are completing their fair share of passes, which ... I mean, you'd be worried if they weren't. So, yay, they're completing passes in favorable conditions against a defense that has been bad for years and is learning new concepts and is still waiting for some of its talent to arrive. But I seem to recall a certain since-transferred four-star QB throwing a lot of incompletions last spring, so hey, at least neither guy is obviously sucking.

And as far as how they've actually looked while doing it? Thorpe reports that it's about what you'd expect: Falk exhibits more command of the offense and makes fewer mistakes, while Bender looks good for stretches, but then will make the kinds of puzzling throws you chalk up to inexperience.

There are times it seems like Bender throws a little better ball or pulls out a nice move, but he also throws the ball to the wrong spot or makes a bad read, occasionally. Falk almost never does either, at least in practice.

And from practice five:

Bender has looked really good at those 25-30 yard throws, maybe even better than Falk. But Falk appears to have a big upper hand in the red zone and goal line situations and threw consecutive touchdowns to Dom Williams and Daniel Lilienthal from about seven yards out today.

Pull it all together -- from these excerpts and what I've read in other practice reports -- and this is what you get:

It's that last bullet point that's got me most intrigued, and is likely the reason why Mike Leach made this an open competition to begin with. Bender's "arm talent" is superior to Falk's; can he catch up enough to Falk's head start in experience to convince Leach that he's not only the better long-term play, but good enough to win games in the immediate?

If you were hoping for a resolution by the end of spring, you're going to be out of luck. Not only is there's pretty much zero incentive to Leach naming a QB at the end of spring, neither guy is playing himself out of it. In fact, it'll probably have all the appearances of a dead heat heading into the fall.

We're getting some clues about the defense 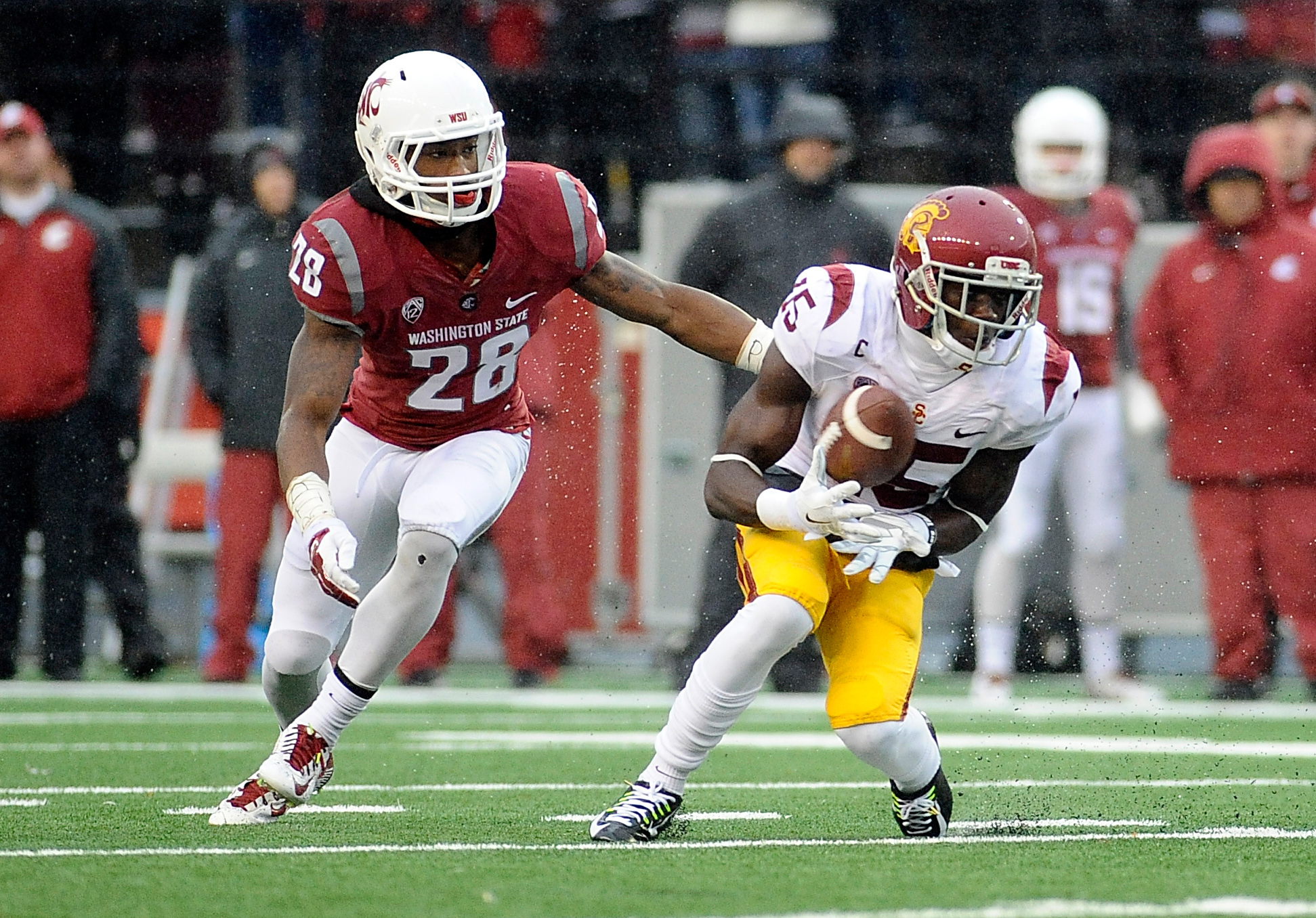 It doesn't sound like what Alex Grinch is going to run is going to be a radical departure schematically from what Mike Breske was doing. They'll still primarily run a 3-4 front, and they'll still have a hybrid linebacker/defensive end (Grinch calls it "Rush" LB instead of "Buck" LB, and apparently he'll stand up full time) -- it's still Kache Palacio. And as there was with Breske, there's lots of talk about generating turnovers, and you can bet there will be a healthy dose of fire zone blitzes, just as there was before.

One notable difference, though, is that nickel probably will effectively be the Cougars' base personnel package. In fact, Grinch has made "nickelback" an actual dedicated position, and the current starter is former safety Darius Lemora. Now, Lemora was a little on the small side for a safety already -- although the sophomore is checking in at 192 pounds this spring -- but given his choice of people to move into that role, one has to wonder if Grinch envisions that position being a little bit like the "Star" position at a number of other schools, where it's not a true fifth DB, but more of a safety/LB hybrid that can both cover and provide run support. It's already been noted that the coverage responsibilities are similar to those previously held by former outside linebacker Cyrus Coen.

As for the rest of the defensive backfield, Charleston White looks to have retained his starting spot from the end of the year at one corner, and Marcellus Pippins looks to be the one stepping into the void left by Daquawn Brown. Isaac Dotson, finally healthy and weighing a strong 218 pounds, is starting at free safety, while Sulaiman Hameed is starting at strong safety. Daniel Ekuale is anchoring the defensive line, with ends Darryl Paulo and Destiny Vaeao on either side. Jeremiah Allison and Peyton Pelluer are still starting linebackers.

Gerard Wicks might be gearing up for a monster season

The running game has been a sore spot for a few years under Leach, but a pair of freshman running backs showed serious promise last season. Jamal Morrow brought the jukes, while Gerard Wicks brought the wood. This spring, Wicks appears to be taking it to another level. While his spring listed weight is the same as his listed weight from last season, the consensus appears to be that he's gotten even stronger while retaining his explosiveness.

Gabe Marks burst onto the scene for WSU football as the most high profile recruit of Mike Leach's first class -- a four-star receiver who was to be the playmaker the Air Raid needed to hum. He had an excellent first season, but uneven performance in his sophomore season left him squarely behind a number of more experienced players.

Rather than use up a year of eligibility trying to get scraps of snaps from behind a glut of outside receivers, Marks accepted a redshirt season, embracing it as both an opportunity to develop and also lead the scout team, often as a quarterback.

Ready to take the field once again, he is more or less destroying the defense this spring, and while it's always tough to know if that says more about the receiver or his counterparts, it's awesome to hear that Marks could be on the way to fulfilling the promise he showed as a freshman. He makes a cameo in the video above, hauling in a TD with a skillful toe tap in the back of the end zone at the 1:40 mark.

Snaps from under center (no, really!)

Leach has said WSU could be under center as much as 25 percent of the time this fall. I don't know if I really buy that it will happen that frequently, but it's a nice little wrinkle that could help out the running game and potential aid in the red zone woes the team has suffered the past three seasons. Brian Anderson looked at it a lot more closely; you should go read what he wrote.

Even though everyone is happy and healthy, some players have regularly been limited this spring. Not too many guys expected to play big roles this season have been regularly listed as limited other than River Cracraft, Robert Barber and Ngalu Tapa. Let's hope the Cracraft in particular is only being held out as a precaution.