Why going under center can be good for WSU's offense

Share All sharing options for: Why going under center can be good for WSU's offense

Following spring practice last Saturday, Mike Leach revealed to Jacob Thorpe that WSU may spend up to 25 percent of snaps under center next season. The Cougs took virtually every snap in shotgun the last three seasons. The change in formation could not only take advantage of the new starting quarterback's skill-set, but possibly ignite the run game.

Going under center can impact the offense in a few different areas, creating advantages you just don't get out of the gun.

For the past couple seasons, WSU has been primarily in three different formations:

They also did some things with a Wing-T look and brought in a Jumbo package with seven offensive lineman, but that sort of stuff was extremely rare. There are a couple signifiers that can switch which receivers are on the line of scrimmage, and a few pre-snap motions that spice things up, but basically this is it.

Want to learn more about the Air Raid?

Check out Brian Anderson's extensive series on all facets of the Air Raid.

It's important to remember that Coach Leach's Air Raid offense isn't about trickeration, somewhat contradictory to the "gimmick" label often assigned to it. The Air Raid is one of the more straightforward "we're gonna line up and play and you can't stop what we do" offenses you'll find in college football. It has a small playbook and handful of formations the team reps the daylights out of, banking on their offensive execution beating the defense's execution on any given play.

Moving under center effectively doubles your formation diversity without increasing the size of the playbook.  Any play can be ran from either gun or under center, and how each are utilized differently can change which keys a defense needs to prepare for, without altering the offensive play. Running Mesh from under center may completely change how the defense approaches the play, while your offense doesn't need to do anything aside from relocating the QB.

It's an advantage to make the defense prepare for more things than your offense needs to memorize.

What hasn't been really discussed - and shouldn't until they show it during the season - is if the under center move will include subbing in a tight end. There's been rumblings Nick Begg has had a good spring catching the ball, and incorporating him into the offense regularly as a hand-in-the-grass tight end in under center formations would make sense.

From the same Spokesman-Review article by Thorpe:

"I think these quarterbacks are more inclined in that direction. Just one of the idiosyncrasies with Connor (Halliday), he's more of a (shot)gun guy, and we'll always be a gun team, anyway, so that'll always be a bigger part of it."

By his senior season, Halliday really developed a quick read of the defense. One of his greatest attributes was getting the ball out to a receiver in a hurry, helping curb some sack totals and allowing receivers to make plays in space. His best footwork was on short drops with quick throws, his rhythm was best served in gun. Not to say he couldn't go under center, his abilities were just maximized when he was in shotgun and tall in the pocket.

From what it sounds like, both Falk and Bender have the footwork to throw in rhythm on drops from under center.

You do lose some advantages with that move. Gun allows the QB to get a wide view of the whole field at the snap; the vantage point gives you a better read of the defense for a play call, you can see the whole line and anticipate pressure a little better, and can also see coverage adjustments from the corners without turning your head to look.

However, when under center, big advantages are gained in play-action -- or even just the threat of play-action. In gun, play fakes are only half-a-second ordeals. The Cougs were never a zone-read team under Halliday (something that might change with Falk's running ability), so any play fake that occurred was brief and right at the snap. Even if a defender bit, they either likely had enough time to recover, or the ball was out so quickly the window wasn't stretched open all that wide from their error anyway.

Putting the QB under center changes the mesh point with the running back on a play fake, both where it is in the backfield and how long after the snap it occurs, which increases how out of position a defender who bit on the fake can get. Open windows on play-action get bigger when the play fake takes longer to develop.

This is all about the angle of attack on a running lane. Wazzu has used essentially three run plays: a middle iso, a zone left, and a zone right. 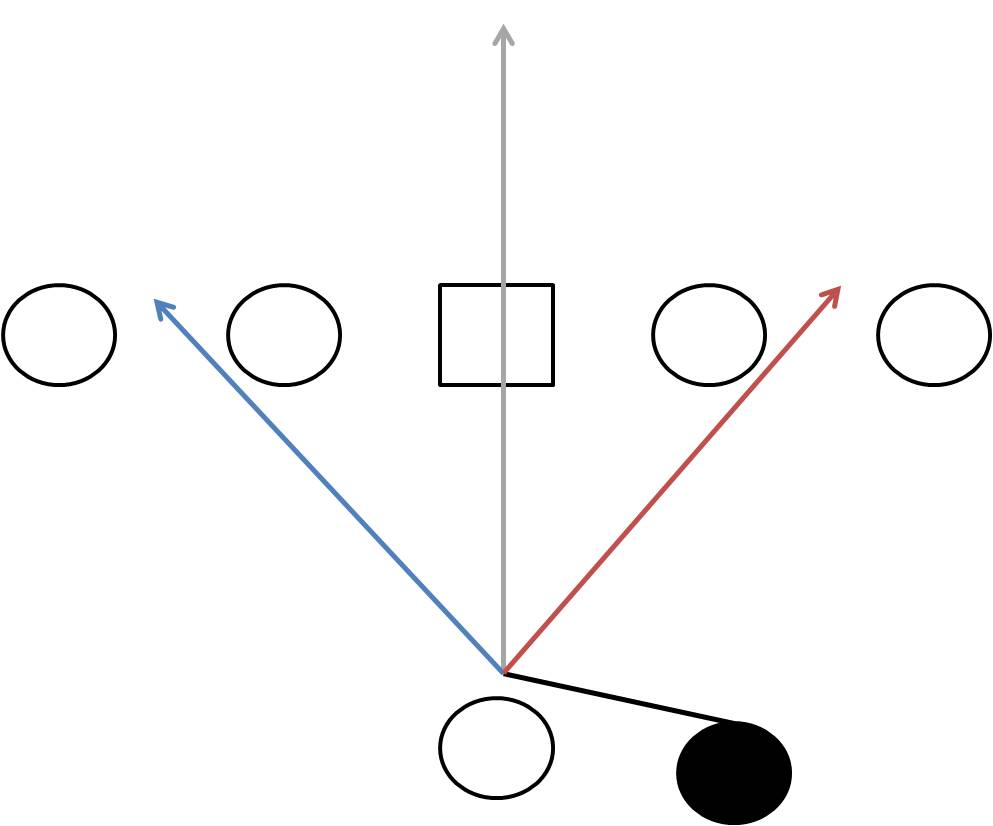 The figure to the right is about as rudimentary as you can get, but the basic takeaway is where the exchange takes place. Just about every running play in WSU's arsenal -- no matter how the defense is lined up or how the line blocks it -- occurs right behind the center (give or take) and five yards deep (give or take).

Don't be too immediately critical though*, like how receivers read defenders and adjust routes, the running back reads blocking and adjusts where he hits the hole. He basically has free reign to bounce or cut to any gap he reads from any run play. A middle iso can bounce outside the tackle if that's where the blocking leads. It's the ball-carrier's job to make the blocks right.

*And remember the QB is calling a run tailor-made to a defensive front's weakness, whenever there's five (or less) in the box for hat-on-hat blocking up front. The OL also has different line calls that adjust how they handle certain fronts. Ideally, you run at the biggest weakness of the front with the best blocking scheme suited to take advantage of it.

You lose a bit of that moving the QB under center. The handoff takes place out past the outside hip of guards on a zone, enabling the running back to hit B-gap a little more north and south a little faster than if he took the ball behind the center. You set your back up to hit the line of scrimmage hard when taking this track.

Sweeps were utilized by WSU, but they're always a little awkward from gun. The back is able to attack the edge full speed with a pitch coming from under center, rather than from behind the direction he's running.

Coach Leach has been consistently criticized for his run game, or mocked for its lack thereof, since coming to Pullman. People just assume the run game is what it is because they believe he doesn't care. Moving the QB under center can be taken as a sign that's not entirely true, but it's not the first one.

Leach brought Coach Mastro, co-developer of the Pistol at Nevada, to Pullman, toying with the formation early in his first year. Neither the running backs nor the green offensive line seemed capable of running it, so they abandoned Pistol, simplifying the run game to their core concepts, and spent the past couple years getting pretty decent at it -- bet you didn't realize that middle iso play garnered 5.8 yards per carry two years ago, did you?

If anything, this should indicate he had it in mind to revamp his run game concepts when he first took over at WSU, but just wasn't able to. Whether that was about personnel not being right or their ability to coach it up not being what it needed to be - the two extremes of criticism - it just didn't work out. Now with a veteran, big, offensive line and some promising talent at running back it, at least on the surface, looks like they're trying to tinker with things to increase productivity on the ground.