What have we learned heading into 2016?

Share All sharing options for: One last look back at WSU spring practice - and a recap of the CougCenter tailgate

With the completion of yesterday's session, WSU's 2016 spring practices have come to a close, which means now is a good time to look back at what we learned over the past month about the team that will take the field on September 3 against Eastern Washington.

(Side note: Only 128 days until Cougar football!!) 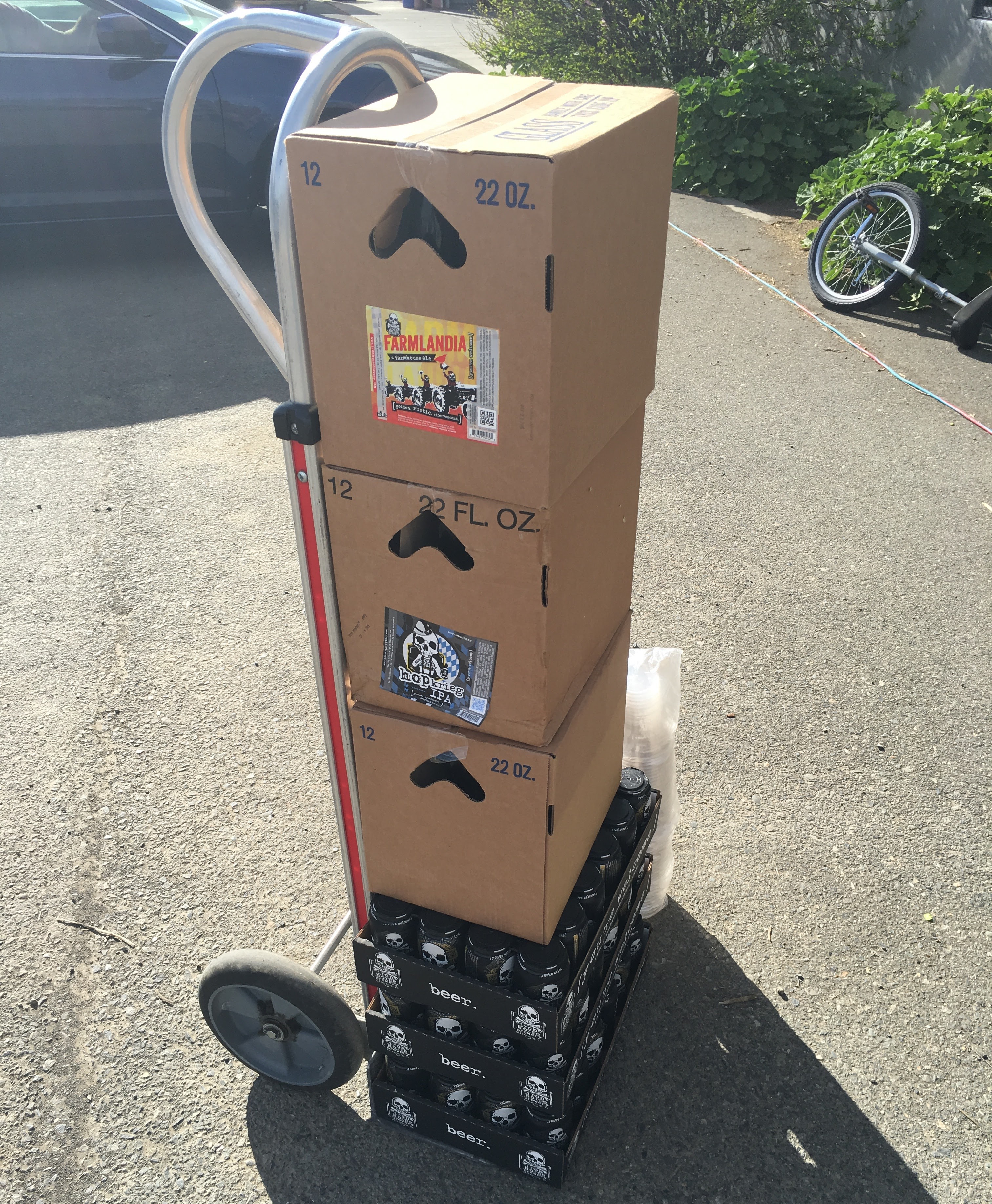 That's a lot of beer.

But before we get to that, I want to quickly recap the First Annual Inaugural CougCenter Tailgate event at the Crimson and Gray Game. (If you truly don't care about our tailgate and/or beer, you can skip right to the football.) A splendid time was had by all, and much beer was consumed, thanks in large part to our partner in the event, Iron Horse Brewery of Ellensburg.

Our Coug Friends over there hooked us up with plenty of complimentary tailgate fuel on the way over to Spokane, which you can see to the right. And this wasn't even quite all of it - there were two more boxes!

Craig and I also were able to make a pit stop by the Iron Horse tasting room (a.k.a. [the pub]) for a couple of beer samplers and the fried boneless chicken thighs, which happen to be served with an incredible red potato salad. (And if you think I'm only saying that because they gave us stuff, I dare you to try it and disagree with me.) On the sampler, I particularly enjoyed the Farmlandia, which is a saison/farmhouse ale, and the Short Cut Sour.

With plenty of Irish Death, Hop Krieg IPA and Farmlandia to go around at the tailgate, not a single Friend Of CougCenter was left thirsty. (Nor hungry, thanks to PJ's stop at local sausage shop, Wally Eggers Meats - and I can vouch for the cheddar jalepeno.)

If you're at your local grocer/beer store and are looking to stock your fridge, consider sending some love back to the awesome people at Iron Horse for us!

Additionally, some of us were able to get our total beer nerd on. Among the interesting beers we were able to sample:

Thank you to everyone who stopped by. It was a blast for me to not only meet some readers, but also to get a handful of our authors together in one spot -- attendees included myself, Craig Powers, PJ Kendall, Michael Preston and Brian Anderson* -- something that is really, really hard to do. We spend a lot of time behind the scenes making CougCenter happen, and getting to hang out with each other in a non-"work" environment was super cool. It was especially rewarding for me to get to meet PJ for the first time. Unsurprisingly, it turns out he's an all-around great dude. (And this is in no way influenced by the fact that he brought all that great beer from Tampa. Well, maybe a little.)

It's all but certain that this becomes an annual event -- it just makes too much sense as a place where we all can get together in a low-stress environment once a year. If you weren't able to make it this time, start making plans for next year.

OK, on to the football! Here's what I think we learned about the 2016 Cougars based on media reports and what I observed in the Crimson and Gray Game.

Yep, this team is going to be good

There's this hand wringing about spring football that was perfectly described by EDSBS a few years ago -- if you're constantly evaluating yourself against yourself, how do you decide what it all means??

As I watched the spring game, the first thing I noticed that there were enough big and fast people to fill out two entire rosters of football players. If someone from USC, Stanford, Oregon, etc. stops by and reads that, they probably will have no idea why that would be noticeable.

But you all do.

Additionally, it appeared both sides of the ball were playing excellent football, with massive breakdowns seemingly few and far in between. For example, most of the copious one-hand-touch sacks were of the coverage variety, which was great in and of itself -- the secondary often ran stride for stride with the receivers while playing basic coverage. But the offense did still score six touchdowns, a reasonable number in my mind, given the talent. Both sides made plays, which is what you want to see.

I'm highly encouraged by that, and it seems that Mike Leach is too -- his post-game and post-practice videos have taken on a much more patient and playful tone than they did the last few seasons. He'll certainly find some occasions to spit fire going forward, but there's just a different vibe, as we can plainly see that what he spent his first four years building is taking hold.

I guess so many people have gotten so used to Marks making jaw-dropping plays that only Jacob Thorpe thought his performance on Saturday noteworthy enough to build a story around.

A short catch with one-cut-and-go for a TD? Yawn.

Falk-to-Marks connection, oh how we've missed you so.

Jumping over Marcellus Pippins' near-perfect coverage to snatch a ball out of the air for a key catch? Yawn. Toe-tapping TD in the back of the end zone on Marks' signature red zone post route? (Fast forward to 1:00)

YOU KNOW WHAT? I REFUSE TO YAWN. GABE IS AMAZING AND I WANT THE WHOLE WORLD TO KNOW THAT IT CAN'T BE SAID ENOUGH.

I'm guessing Pippens probably doesn't feel great about what he did on Saturday, but even the very best corner loses a few battles going head to head with the best receiver in the conference, which is what Pippins did on Saturday with Darrien Molton on the other team. For me, it's more about the fact that Pippins was right with Marks for the majority of the afternoon, and in great position to make a number of plays -- like the one you see at the 0:52 mark here:

Marks just made better plays at times. And I'd guess that Alex Grinch's message to Pippins in the video room is that he is thisclose, and now he just needs to actually make the play.

OK, fine -- I'll go ahead and add to the James Williams hype train

We all were curious as to what we'd see from the much-ballyhooed redshirt freshman, and I went into Saturday's game prepared to be underwhelmed because ... well, just because how many things actually live up to the hype?

I was not underwhelmed. Williams was wearing all white like everyone else who was swinging between both teams so they could get some playing time behind the two deep. But at some point I turned to BA and said, "He's actually playing for both teams because the coaches decided it wouldn't be fair to just put him on one side!" That's how good Williams was. I mean ...

James Williams goes hurdling towards the sideline for a 5-yard gain. We see you getting up... #GoCougs pic.twitter.com/uD1urAi3Ff

I said when he committed that Williams reminded me of Bishop Sankey with his ability to accelerate and move in and out of cuts without losing speed; BA had another comp:

Little lunchtime rewatch of the Spring Game. James Williams runs and just moves like Shady McCoy. They could be twins, it's uncanny.

The burst is obvious to see, but for me what sets him apart is the exceptional footwork and balance. Those are two things I think I didn't pay enough attention to in running backs until I watched Marshawn Lynch play every week for five-plus years; it gave me an appreciation for what that does for a running back's ability to absorb a hit and keep moving forward. Williams isn't real big at just 5-foot-11 and 195 pounds, and yet he always seemed to be falling forward.

We wondered where Williams would fit in for 2016. Forget that -- barring an injury, based on what we saw Saturday, I'll be more surprised if Williams isn't the team's primary back at some point this season. I think it's probably the other three guys who need to be worrying about where they fit. Williams is just special.

This sort of goes in with the first observation, and underscores how far the program has come.

In each of the past two spring games, it's looked pretty iffy past the starter, and the third stringer looked darn near clueless. On Saturday, the presumptive third stringer, Tyler Hilinski, had the best stat line of the day -- 26-of-31 for 223 yards and a touchdown. All told, the top three were a combined 65-of-80 (81 percent) for 542 yards (and a solid 6.8 yards per attempt), six TDs and one interception.

The funny thing is that Falk's stats actually were the most meh -- just 170 yards (6.1 ypa), two TDs and zero picks while having the benefit of throwing to Marks. But he was in command, as he usually is, and took what the conservative coverages were giving him.

Bender probably looked the "worst," as one explosive TD really saved his stat line (16-of-21 for 149 yards). But that's pretty relative -- he was generally fine, save for one ill-fated throw into coverage that resulted in a Shalom Luani interception. That said, Thorpe reiterated today in his chat that Bender had the better overall spring in the competition, which means Hilinski likely is third string heading into fall camp.

But the fact that I feel pretty good about either of those guys backing up Falk next season is really great. (Please don't transfer, either of you.)

Frankie Luvu could be a wooooooow player

Luvu made a couple of really "wow" plays at Will, one of which involved closing on a running back who had made a catch on the sidelines. I see what Grinch was talking about with him. I have no idea what his consistency level was since I wasn't watching him in particular (nor would I even really know what his assignments were), but the playmaking ability is so plain to see.

Whether it's Charleston White or Jalen Thompson next to Shalom Luani, we're going to be in good hands

Again, the lack of obvious breakdowns from two guys who have never played safety in a game at the college level was excellent to see. You'd never know Thompson should still be in high school, and White -- who I think played exclusively at safety on Saturday -- absolutely looks the part of a player at that position now. Whoever wins that spot in the fall I think is going to be just fine.

Did you see how Aaron Porter stood up Gerard Wicks at the goal line??

That's your backup Mike against the powerful starting running back, y'all. Like I said ... two deep. Awesome.

There was a point late in the game where he whipped his counterpart so bad for what seemed like the 10th time that he just literally pulled off the sack so that the offense could run its play. The refs gave him the sack anyway.

Unfortunately, Cole Madison was out; it would have been a lot of fun to watch him and Mata'afa do battle. Apologies to B.J. Salmonson, but he's got a ways to go to catch up to Madison, and it showed.