Like my colleague, Mark, I watched the game again. I had my own thoughts, so you get more! (Plus, mine has more GIFs and that snazzy picture of Deone Bucannon at the top.)

Share All sharing options for: WSU vs. Auburn: A second look, again!

Let's dive a little deeper into the game, now that I've watched it a second time.

Junior Gauta is an absolute beast. One of the things about watching a game again is that it allows you to focus on different areas of the field, and I made it a point to watch Gauta. He's playing about 15 pounds lighter this year than last year, and I wondered what that would do to his ability to hold the point of attack as the nose tackle in Mike Breske's 3-4.

Not only is he as strong as he ever was, he's quicker and more explosive. Rather than tell you all about it, I'd rather show you with pictures what I'm talking about.

This was his first big play of the game -- 3rd-and-2 with five minutes or so left in the first quarter. When I watched the game the first time, I was sure it must've been a linebacker making this tackle. Nope. Watch Gauta hold his ground, shed his blocker, strafe the line like a linebacker to get in position, then explode through the ball carrier. It's hard to pick him out at first, but after a few loops, you'll be picking your jaw up off the floor:

Speaking of playing like a linebacker, hey rest of the Pac-12! Let's see your nose tackle stand up a tackle blocking down then chase a running back out to the numbers and be in position to make a stop:

Granted, it was Toni Pole who actually made the stop (he was excellent in the game as well), but the speed and agility displayed here is fantastic.

Here's one more for you. 3rd-and-1. Gauta doesn't make the tackle; instead, he simply blows the play up by standing up the center and forcing the running back to pick a different hole - right into the waiting arms of a submarining Destiny Vaeao.

Gauta didn't make the play ... but he made the play.

I could have even added a couple of more plays from Saturday - he blew by the guard on what I presume was a missed blocking assignment only to miss the wide open sack, and on another play, he chased Nick Marshall out of the pocket and swiped his ankle to trip him up - but I figured Collier might be getting GIF-making fatigue.

Deone Bucannon likes to hit anything that moves. This isn't exactly a secret, as this is what got him into the lineup as a true freshman ahead of the contact-averse Chima Nwachukwu in the first place. He's always been a tackling machine, leading the team in tackles for two of the last three years (and finishing second in 2011). But now, with this added weight, he's a hitting machine.

Observe, and bookmark this for posterity:

The amazing thing about this hit? It wasn't even illegal - he puts his face mask on the runner's shoulder and then explodes through the runner's chest. They should just go ahead and show this in every tackling clinic from now until the end of time.

He'll probably get ejected by Pac-12 refs for it, though.

In the end, Bucannon was credited with 14 tackles, 12 of them solo. On the one hand, it's great that Bucannon was flying around and making tackles, but let's be real - it would be better if this hit had never happened, since it happened 20 yards downfield. There was far too much of that again on Saturday. I look forward to a day when a safety isn't leading the team in tackles.

I don't feel quite as good about the offensive line as I did. The vibe after the game regarding the offensive line was incredibly positive. But I think we were all so shocked by the fact that the offensive line put together a competent rushing performance and only gave up two sacks that we failed to take into account the two intentional grounding penalties that are, for all intents and purposes, sacks. 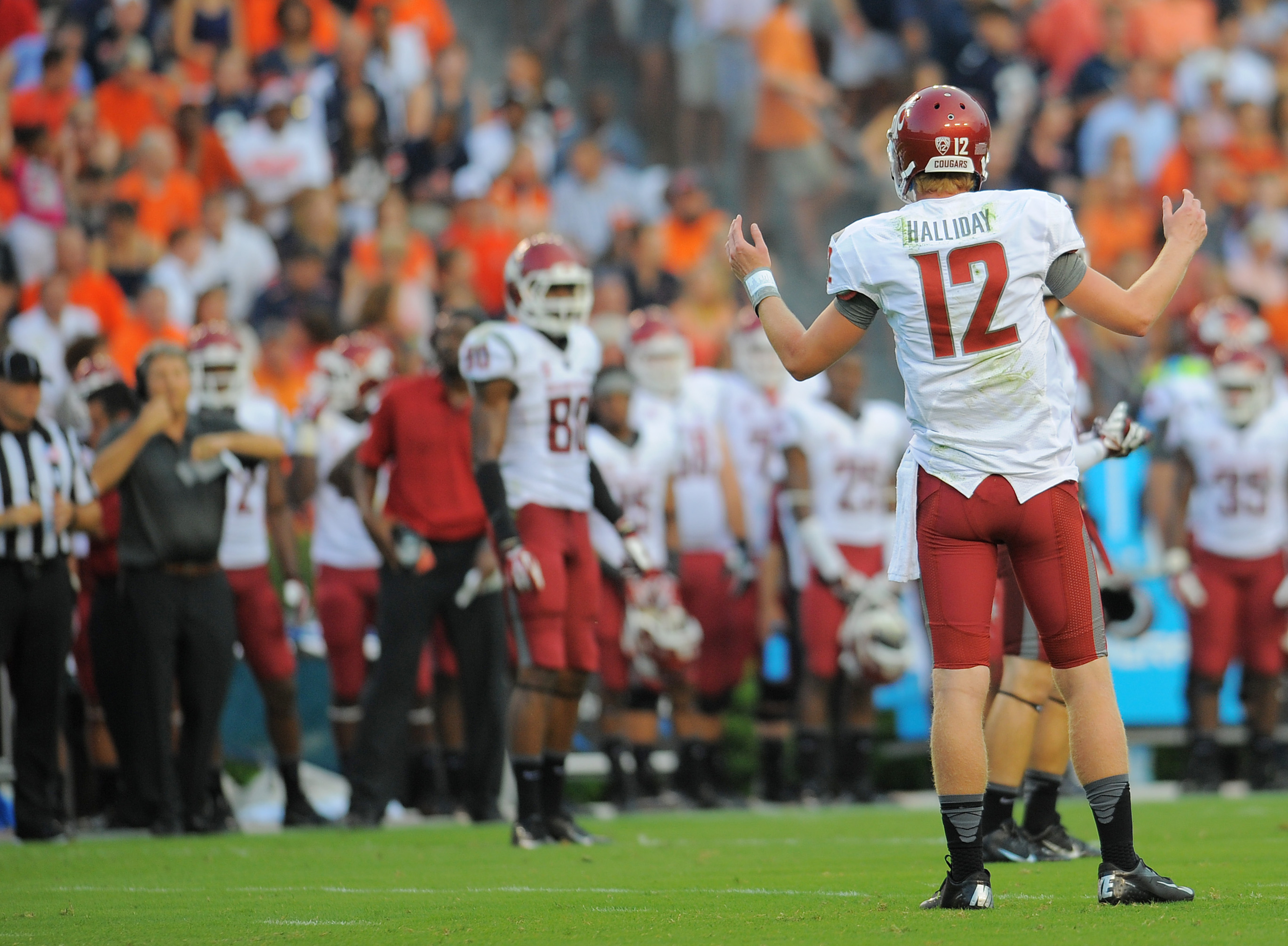 Click above for a little different take on the game.

Don't get me wrong. This was a huge step in the right direction, given that Halliday wasn't constantly under siege and the running backs averaging over 5 yards per carry. But there is still tons of work to be done here, particularly on the right side of the line. John Fullington still struggles to block elite athletes, Rico Forbes looked lost from time to time, and miscommunications between the two caused more than a few issues. The latter two things should come along as the two of them play next to each other.

On the bright side for Forbes, he is as massive as advertised. While he looked a bit stiff at times, ends had an incredibly difficult time getting the edge on him. That's one of those "jimmies and joes" things that the coach from the 70s likes to remind everyone about.

Additionally, the left side of the line was pretty much nails. Gunnar Eklund and Joe Dahl were borderline dominant at times, while Elliot Bosch flat steamrolled some dudes - on one run, he practically fired out before the snap to destroy a linebacker. The stunts that gave the team so many fits last year generally were handled flawlessly.

Lots to like, but still lots and lots of room for improvement.

The Cougars' conditioning is for real, people. Mark mentioned the lack of rotation on the defense, and I don't think nearly enough is being made of this. Auburn fans told us all week that it was going to be hot and humid and oh my gosh our players will probably die trying to play this game.

Instead, it was the Auburn players who looked like they were struggling to keep up with the WSU offense for much of the game. I can only think of one time when the defense sort of looked gassed to me, and that was when the WSU offense was really struggling to move the ball early in the third quarter. The rest of the time, the best players played because they could.

What a departure from watching Paul Wulff's players continually beg out of games. Leach really wasn't kidding about getting these guys in shape. It didn't lead them to the win on Saturday, but file it in the back of your brain - I'll bet it leads to a fourth-quarter victory at some point this season.

Marcus Mason looks like an actual running back. At the risk of being redundant, Mark also talked briefly about Mason, but I want to talk about him a little more. I don't know if you remember when Paul Wulff signed Mason, but he was touted as an under-the-radar speedster because he hadn't played much football.

Well, for the last two years, he pretty much looked like a fast guy who hadn't played a lot of football -- straight lines were common, moving deftly behind blockers not so much. I was surprised when he moved ahead of of Teondray Caldwell on the depth chart, but he showed why on Saturday. He looked excellent. As did Caldwell.

Thoughts on any of this? Or anything else you noticed that might have been under the radar?*

*Yes, this is an open-ended invitation for comments. Fire away! :-)