WSU hasn't played USC since 2010. Has the gap closed between the two teams since then?

Share All sharing options for: WSU vs. USC football preview: Marqise Lee and the Trojans offense

The Washington State Cougars head to Los Angeles for their second-straight road game to start the season when they face the USC Trojans on Saturday night. Despite recent scholarship restrictions, USC is still loaded with talent on the offensive side, including one of college football's best wide receivers.

Head coach Lane Kiffin is now in his fourth season as the Trojans' head coach, and he remains in charge of the offense. Kiffin made his name (in part, not counting his Dad's contributions) as USC's offensive coordinator in 2005 and 2006. He parlayed that into a head coaching job with the Raiders (seriously, Oakland?). After two seasons there, he secured the head coaching job for one season at Tennessee, where a 7-6 record catapulted Kiffin to one of the most coveted jobs in college sports.

Kiffin's offenses have had some elite seasons and some moderately successful seasons. Here is how they have ranked in Football Outsiders' various ratings:

College football historians will note that Kiffin had some pretty good talent to work with in those two seasons as USC's offensive coordinator (Reggie Bush, Matt Leinart, Dwayne Jarrett, LenDale White, Steve Smith, etc.). A better test of his impact came when he moved to Tennessee and no longer possessed the top talent in his conference.

The Volunteers were above average, but not spectacular in Kiffin's season, and the same carried over for USC's offense in 2010. In 2011, the Trojans appeared to be on their way back to national prominence with Matt Barkley and Robert Woods leading the way.

Last year was a step back for USC, even after returning its quarterback and top receivers. Woods is now gone to the NFL, but Marqise Lee still remains. The issue now for the Trojans is the guy throwing the ball to Lee.

Cody Kessler and Max Wittek split time against Hawai'i in USC's first game. Neither was impressive against the Warriors: Kessler completed 10/19 for for 95 yards, a touchdown and an interception. Wittek connected on 5 of 10 passes for 77 yards.

It would be good news for the WSU defense if USC's quarterbacks continue to struggle. The Cougars' secondary is still questionable, and being able to sell out for the run would be a big advantage for WSU as it tries to overcome the talent disparity.

If USC does figure out the pass, WSU's defense may have a hard time. The Trojans excelled in that area a season ago, while the Cougars struggled: 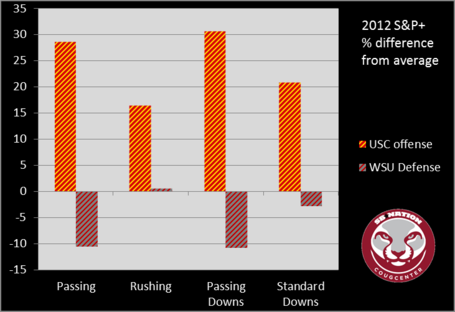 As the chart shows, the Cougs were non-terrible against the run last season, but passing was a different story. If Kessler and Wittek figure out how to connect with Lee and USC's talented corps of receivers more often, the Trojans could be in for an easy day on offense.

But USC will no doubt try to run on the Cougars the same way Auburn did last week. The defensive line held its own for the most part against the Tigers, but WSU's linebackers were another story. The Wazzu coaches better hope they cleared up some of the issues in film study. USC has the ability to break that big play on the ground like Auburn.

It's an oversimplication, but this part of the game really relies on USC's ability to throw. If they can, WSU will have trouble keeping up. If they can't, the Cougs stand a chance for an upset.