Get an inside look at the Trojans before Saturday's game.

Share All sharing options for: WSU vs. USC: Q&A with Conquest Chronicles

Each week during the football season, we attempt to engage in a question and answer exchange with one or more of the authors of the site representing WSU's upcoming opponent -- in this case, Conquest Chronicles, where Evan Budrovich was kind enough to answer five questions about USC for us in advance of Saturday's contest.

CougCenter: The general consensus is that the Trojans' season-opening win over Hawaii was less than impressive. How did that performance stack up to you expectations, and what do you think it tells you about how good (or not good) this year's edition is?

Budrovich: The Trojans opened up the season looking impressive and lackluster on opposite sides of the ball, which honestly fell right into our predictions from fall camp. While the offense may have looked less impressive than we would have liked to see, the fact remains that the running game is strong with Justin Davis and Tre Madden working in tandem. Defensively meanwhile, the Trojans are rushing the passer with great success and have shown tremendous athleticism and quickness early this season. The first game points out that this team is inexperienced on offense and has some signs of weakness in the secondary on defense but more importantly, injury concerns could ultimately be the biggest sign of concern moving forward. 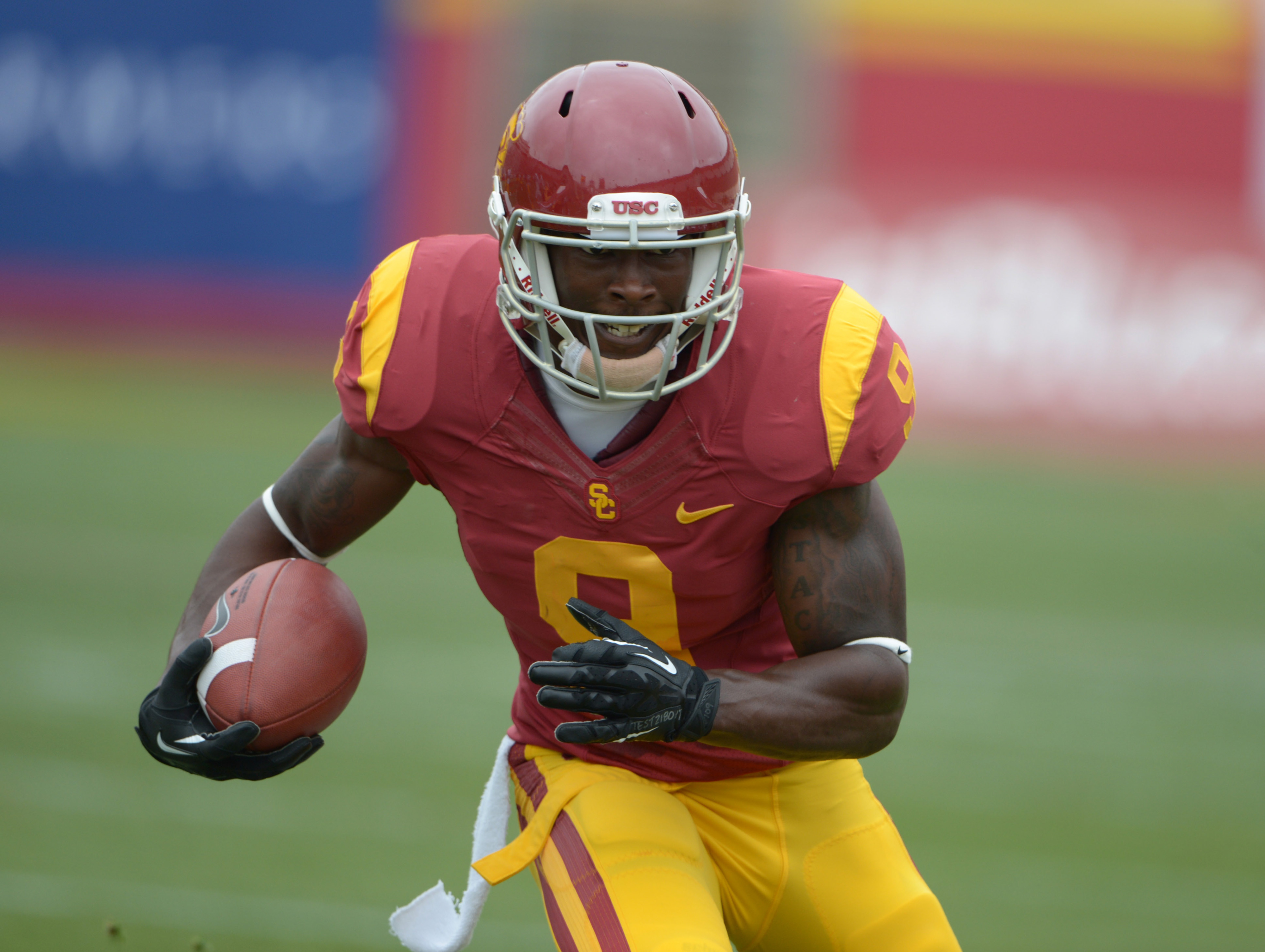 CougCenter: If Lane Kiffin was hoping splitting time at QB would bring clarity, last week's game seemed to do anything but that. What's your take on the battle between Max Wittek and Cody Kessler? And tell us about what each guy brings to the table.

Budrovich: Cody Kessler is a mobile passer who works well when the play breaks down and is forced to scramble to his throwing side. Max Wittek plays like a gun slinging quarterback who continues to work on hitting his short and intermediate routes by truly reading the defense. In terms of which one best helps the offense, the question has remained unanswered mostly because of the situations they have been presented in terms of play calling and repetitions. What makes this competition mind-numbingly annoying is the fact that the Trojans can win with either quarterback under center; the question becomes whether one will ever emerge?

CougCenter: Conversely, reviews on the defense were excellent. Two part question. What was the biggest factor in last week's performance: Clancy Pendergast as the new defensive coordinator, a talent influx, or Hawaii just sort of being awful? And how prepared is USC to deal with a team that throws the ball 60 times?

Budrovich: The USC defense has vastly improved under Clancy Pendergast, and that mostly has to do with the situations and reads presented to them on each and every play. While the talent on defense remains nearly the same (returning seven starters from last season), Clancy has immediately transformed the defense into an aggressive bunch that is much more aggressive than the read and react schemes in the old Cover Two. That being said, the Trojans biggest sign of concern lies at the injury-riddled cornerback position leaving fans wary of a pass-heavy attack that can protect the quarterback for long periods of time. If the Trojans pass rush does not reach the quarterback, a heavy dose of passing could lead to easy points.

CougCenter: Give us the names of two players -- one on offense, one on defense -- our fans might not have heard of who could have a huge impact on the game, and tell us why they could be critical to its outcome.

Budrovich: Two players to keep an eye on this week will be OLB Jabari Ruffin and LT Chad Wheeler for this weeks contest. Ruffin, a redshirt freshman, is replacing 13-sack contributor Morgan Breslin on the defensive line and showed some outstanding tenacity and toughness rushing the quarterback last week. Wheeler, in similar fashion to his counterpart, is starting his second career game at left tackle and will need to hold down the blind slide along with guard Max Tuerk for the Trojans to truly open up their deep passing game.

CougCenter: Does the Cougs' season-opening performance give USC and its fans the sense that WSU could actually win this game, or are the Trojans marking this down as a near-certain victory?

Budrovich: Trojan fans are marking this game down as a for-sure victory, but that has not stopped the players from raving their opponents and taking each and every game seriously. After watching Washington State turnover their opportunities against Auburn, Trojan nation is confident that their aggressive defense can dominate the game to give the malignant offense easy opportunities to convert for points. That being said, players remain focused on taking Washington State seriously in an all business like approach for Saturday.

Conquest Chronicles: The Cougars passed the football at an extremely high rate last week, and look to do the same for most of the season. How will they adjust and prepare for the powerful USC pass rush?

Me: I don't think they'll adjust initially. The offensive line was a huge problem last year -- as it was for the four years before that -- but it was clear in last week's game that the unit has made some major strides in the offseason. The linemen are bigger and more physical, and they handled many of the blitzes and stunts that gave them so much trouble last season. But the Tigers are less talented than the Trojans on the defensive line. My guess is you'll see the Cougars come out in their typical four-wide alignment, but if USC is generating too much pressure, you'll see some two-back alignments with one running back staying in to pass protect. But that certainly won't be Mike Leach's first option.

Conquest Chronicles: Connor Halliday, while an improved passer, has struggled with INT's throughout his career. What can the Cougars do on offense to simplify the game for him, or is that not part of the offense?

Me: That's the thing about the Air Raid: The offense already is simple. Where Halliday gets himself into trouble is he makes it unsimple (for lack of a better term). His first interception on Saturday was the sort of interception you live with -- he either threw it a little behind the receiver, or the receiver didn't settle into the hole where Halliday thought he would. No big deal. But the other ones? He was trying to play hero ball (again) and got himself into trouble. At some point, he just has to make the choice that he's not going to make those throws. Or he's going to get benched again, as he did last year.

Conquest Chronicles: Last week, the Tigers ran all over the defense with power running so who up the middle needs to step up and close down the fort?

Me: The middle wasn't the issue for WSU. In fact, the middle was quite stout, led by nose tackle Junior Gauta. The edges were where WSU had their biggest issues, as the lateral speed just isn't there yet on this team. USC has superlative athletes, just like Auburn, and while the Trojans are unlikely to to be able to just run down WSU's collective throat, they could experience some success if they can get wide.

Conquest Chronicles: Does Mike Leach have any tricks up his sleeve when his Cougars head into Los Angeles this weekend? (Like big weapons, trick plays, different formations, going on 4th down etc.)

Me: Well, the Cougs are going to pass, pass, pass, and they're going to be as aggressive they can be. That means they'll use all four downs when it's reasonable. The only real trick he's likely got up his sleeve is somehow tricking Halliday into not forcing the ball into no-chance windows.

Conquest Chronicles: The Cougars have not defeated USC since 2002, but are also playing them for the first time in the new-look Pac-12 alignment. What type of confidence does WSU have (given USC QB troubles and WSU offensive success) about winning this match up to start Pac-12 play?

Me: These players have been adamant that they are a different breed than WSU teams of the past, to the point that it's pretty clear this is the message they're receiving behind closed doors. Just listen to Halliday at his press conference earlier this week. It makes sense - Leach often lamented last year that they were a lot closer than most of the players realized, and he said that their poor attitude had as much to do with their losing ways as their talent. This team obviously worked crazy hard in the offseason -- their conditioning in the sweltering humidity of the deep south was off the charts -- and they seem to believe in themselves more than previous editions. They were legitimately pissed off that they had let the Auburn game slip away. I don't know if this new found confidence necessarily translates into a win, but they'll certainly walk into the coliseum believing that they can win. I don't think they'll be intimidated. Only one of these guys (Deone Bucannon) played against USC in 2010, and I think that'll help, too