There is no headline I enjoy writing more. It's time for victory links.

Oh, hello there 1-0 conference record, great to see you. It's been a couple years, you look great. Have you lost weight? Anyway, thanks for coming, enjoy the party.

We'll get to the victory links in a second, but first let's just take a moment to bask in how great this looks. 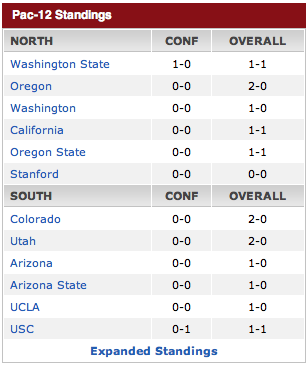 During the offseason, I asked if you knew WSU was going to start 1-1, would you rather beat USC or Auburn. A whopping 66 percent of you said USC and the feeling you have right now is why. Part of it is celebrating a big win for the Cougs, but there is also some joy in seeing USC lose, especially with WSU's history against the Trojans. If USC fan tears are your style, you may enjoy this vlog from a Trojan fan discussing the game (H/T to Britton Ransford)

WSU hasn't beaten USC in the YouTube era, so enjoy your first fan reaction video to the Cougs beating the Trojans. Now for the rest of the victory links.

Washington State Defense Stifles #25/22 USC in 10-7 win - Washington State University Official Athletic Site
Fans in cardinal-colored jerseys leaned over the railing and bellowed their boos into the Coliseum tunnel. Negative chants rained down on the coach as he ran to the locker room after each half.

USC stuck in neutral after home loss to Washington State | Campus Union - SI.com
We had a feeling that USC wasn’t headed the right direction in 2012, when a preseason top-five team stumbled all the way to a 7-6 record. We watched those struggles continue in USC’s opening game of 2013, when Hawaii briefly led the men of Troy 5-2 in the first quarter before the Trojans finally found their footing in an otherwise ugly contest. But it seemed most believed that, in the end, it would turn around. This is USC, after all.

Cougs pick off SC - Spokesman.com - Sept. 8, 2013
The only souls left dancing in this storied sports venue were colored crimson, maybe a couple dozen of them jumping and laughing and singing Washington State’s fight song in the end zone seats next to the tunnel as players, coaches and assembled observers exited Memorial Coliseum on Saturday night.

Tale of the tape: WSU 10, USC 7 - SportsLink - Spokesman.com - Sept. 8, 2013
It will be a happy flight home for WSU, which pulled off a 10-7 upset of No. 25 Southern California at Memorial Coliseum on Saturday night. We have our usual tale of the tape below.

LOS ANGELES: No. 25 USC offensively inept in 10-7 loss to WSU | College | Merced Sun-Star
Fans in cardinal-colored jerseys leaned over the railing and bellowed their boos into the Coliseum tunnel. Negative chants rained down on the coach as he ran to the locker room after each half.

WSU notebook: Despite his turnovers, Halliday still holding on for Cougars | Cougar Football | The Seattle Times
After two games of the 2013 football season, the Washington State quarterback job appears to belong solely to junior Connor Halliday, but 2012 might suggest Halliday needs to stay on guard.

Cougars topple USC | Bud Withers | The Seattle Times
Andrew Furney had just kicked a 41-yard field goal to give Washington State a three-point lead in the fourth quarter — yes, over USC — and now, Mike Leach gathered his entire squad for a brief, pointed talk on the sideline.

Loss leaves USC Trojans searching for answers - ESPN
As the Trojans came out of the Coliseum tunnel for the home opener against Washington State on Saturday they were led by 1981 Heisman Trophy winner Marcus Allen, a symbol of the glory days of USC football.

USC's streak of 15 consecutive wins in home openers is over. Washington State defeated the Trojans, 10-7, at the Coliseum in what was also a Pac-12 Conference opener.

Mike Leach couldn't stand in the Coliseum tunnel and pretend everything went according to plan for Washington State in a messy, clunky game dominated by both defenses.

Man, I just feel dirty after watching that game. I could use a hot shower. Take off next week vs. Boston College. This will take some time to recover from. Ugly.

Andrew Furney kicked a 41-yard field goal with 3:03 to play, and Washington State beat No. 22 Southern California 10-7 Saturday night for its first victory at the Coliseum in 13 years.

Fans in cardinal-colored jerseys leaned over the railing and bellowed their boos into the Coliseum tunnel. Negative chants rained down on the coach as he ran to the locker room after each half.