Class rankings from the major recruiting services are more than just water cooler fodder for fans. How did Mike Leach's first full class stack up? And are you happy with the progress he's making on the recruiting trail?

And if a player isn't very highly thought of? "He's a diamond in the rough! Love his potential! Get him in the weight room and watch him develop!"

But the reality is that the recruiting services, in general, are pretty good at what they do. How do we know? Because a team's rankings tend to be predictive of success. (If you're mathematically inclined and want to know just how predictive, go here.) It's not a perfect correlation -- teams such as Boise State and TCU have been able to regularly outperform their rankings, while others such as UCLA have routinely underachieved relative to the expectations.

Some will use that as a reason to dismiss rankings, but that's throwing the baby out with the bath water. Rarely is that a good strategy.

Let's look at where WSU ranked this year:

Not exactly overwhelming. Scout seems to think the most of our class (more on that phenomenon in a second), with 247sports not far behind. The composite ranking -- which is compiled by 247sports by creating a composite score for each recruit from the four recruiting services (or just the ones who evaluated him) -- rates this class near the bottom of both the big five conferences and the Pac-12.

Here's what Rivals had to say about the class:

Sleeper: Paulo Lepua probably didn't get the respect he deserved on the high school level. He has a tremendous motor and backs down to no one.
Overview: After the rumors about Bruggman were debunked, everything was smooth sailing for the Cougars. They landed some serious talent. Daquawn Brown is a fantastic athlete at cornerback, Lepua is underrated at defensive tackle and the Washington State staff loves both players from American Samoa -- defensive tackleDaniel Etuale and defensive end Emmitt Su'a-Kalio. Running back Gerard Wicks could be special down the road.

And here's what ESPN thought:

Needs filled: This was quietly a very good encore recruiting class for Mike Leach in his second season at the helm. It's heavy on linemen, heavy in the secondary and it's headlined by a four-star wide receiver in Vince Mayle -- a JC transfer from Rocklin, Calif. Interestingly enough, it also has two fairly highly rated running backs. We know Leach isn't going to be a run-first guy -- but the Cougars could certainly use the help after rushing for 29.1 yards per game last season.

As we mentioned, this is hardly determinative. But it is some food for thought when considering that Mike Leach is expected to be able to produce a top-half-of-the-conference program.

There's a general feeling that Leach is recruiting better than his predecessor. That would seem to be true, based on this pretty graph (bigger here): 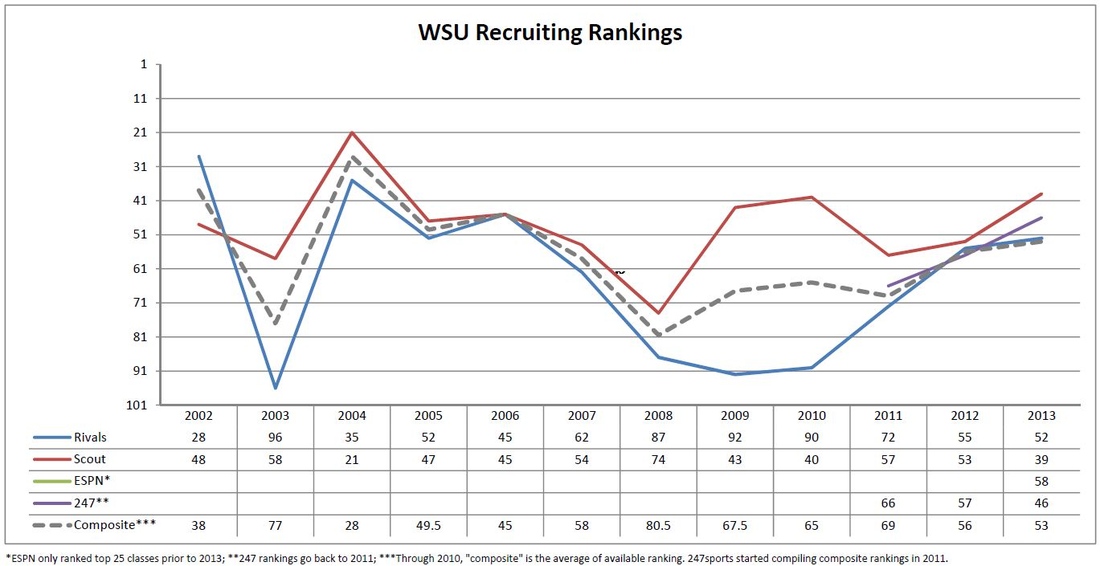 The first interesting thing I see is that, yes, recruiting does appear to be on an upswing under Mike Leach. Hooray! Despite a short cycle last year, he put together a class better than the year before, and this year was better than that. I really don't have much else to add here other than to say I'm excited at the prospect of this continuing.

The other interesting thing I see? The services tend to more or less agree on these classes ... except for 2009 and 2010, when Rivals and Scout had vastly different interpretations of those classes. What the heck happened there? I went back to try and figure out why, but quickly realized that's a time investment that's above my pay grade. (If a reader wants to take up this challenge, I won't stop you.) You can read up on how Scout and Rivals each do their team rankings, but Rivals' current system has changed since then, and I don't know if Scout's is the same or not.

What I do know is this: Those classes are the ones that featured a number of players who arrived and played extensively as freshmen under Paul Wulff, with 2009's group being fourth-year players last year, and 2010's group being fourth year players this year. The cumulative record of the 2009 class is 10-38; for 2010, it's 9-27. The average Rivals ranking of the three classes immediately preceding the 2-10 record in Paul Wulff's second season? 90.

You can feel free to draw your own conclusions about which scouting service probably was closer to accurately assessing the ability level of those classes.

What else do you see in here? Are you happy with the progress being made in recruiting?