Could spending more on recruiting expenses be WSU's 'Moneyball?'

The Cougars continue to rank last in the Pac-12 in spending on talent procurement. But the gap from last to first isn't all that big, relatively speaking.

Share All sharing options for: Could spending more on recruiting expenses be WSU's 'Moneyball?'

For a long time, WSU has been thought of by its fans as the little engine that could ... the school that does more with less ... the school that -- against all odds! -- somehow beat the system to win the Pac-10 (twice!) and go to the Rose Bowl (twice!).

The money involved in WSU football 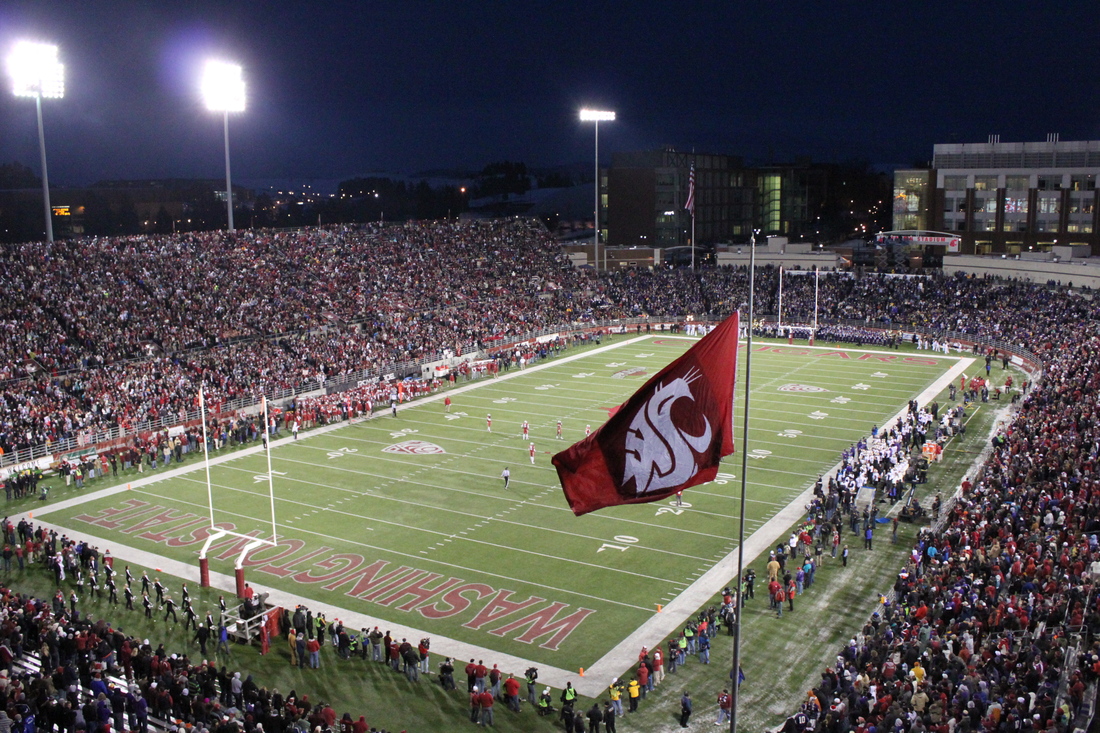 How does WSU spend its money? Some of the numbers in the budget might surprise you.

The last 10 years have shown what a remarkable anomaly that was. Year after year after year, college football demonstrates that -- with only a handful of exceptions -- those programs that succeed the most are those that procure the greatest number of highly thought of recruits.

I realize many WSU fans don't want to believe this, because the fact of the matter is that competing regularly for four and five-star recruits never has been (and probably will never be) our thing, and it's far more comforting to simply think that those pesky recruiting rankings just don't matter. But it's not true, and if you don't believe me, read this (by SB Nation's Bill Connelly) and/or this (over at MGoBlog).

If you prefer pictures to words, here's a nifty little chart put together by Brian Anderson:

There's more out there, but that should be sufficient.

All of that came to my mind when I saw the figures yesterday in Mark's Hot Cougar Action post. WSU spent just about $730,000 in 2012 on recruiting expenditures, the smallest amount of any major conference team in the country.* And this is after a$128,000 increase in that budget in Mike Leach's first season at the helm!

In fact, WSU spends roughly half of the Pac-12 "leader."

The craziest part about this is that WSU is easily the most remote location in the conference -- and one of the most remote major conference colleges in the country -- meaning that the school's recruiting dollar doesn't go nearly as far as Washington or USC's as it travels to and from California, Texas, etc. ... assuming travel (for both coaches and official visits) is actually what makes up the bulk of spending here.

But that leads to another question: If most of their recruits are a drive or short flight away, what in world are USC and UCLA spending a million-plus dollars on? And what can WSU learn from that?

I actually have very little idea about the answer to the first question. One possible explanation is that this is simply differences in accounting between the schools. But if we assume the schools generally are accounting similarly (which might be a dumb assumption -- I honestly don't know), another possible explanation is it's used on administrative staff that streamlines the recruiting work of the assistants, who are the ones who actually are allowed to have contact with recruits off campus. I believe the size of the behind-the-scenes staff is not something the NCAA restricts, but I'm not certain. I actually had a very difficult time finding this information in an easily digestible way. Maybe a reader who is more knowledgeable can enlighten us in the comments.

What it definitely demonstrates, though, is that there is some amount of spending by USC and UCLA -- something probably in excess of half a million dollars -- that is clearly above and beyond what we would consider basic minimum spending needed to compile a roster. And these programs doing this kind of spending obviously believe it's providing some sort of tangible return in terms of a recruiting advantage.

In fact, the data supports such a conclusion. Via Brian again: 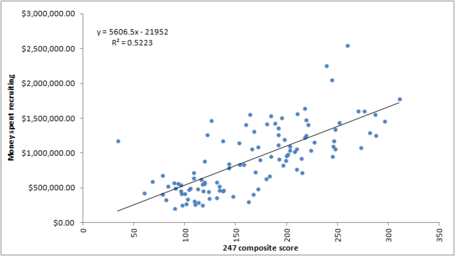 Like anything involving money, spending does not guarantee wins. But is it an accident that four of the top five spending programs in 2012 landed four of the top 18 recruiting classes in 2013? You can argue that USC and Oregon's classes came about because of the inertia created by program success. But what about UCLA and Washington, which have only been marginally relevant nationally for the past decade? Obviously it's not all about the spending -- these are two historically successful programs in big-time markets -- but I think it would be foolish to dismiss the role spending plays in their ability to get the attention of top-tier recruits.

This tells me that there's a strong chance that WSU could see a tangible benefit from increasing its recruiting budget, spending it on whatever it is that those schools spend it on that's not related to travel. And the most incredible thing here is that unlike facilities (or until recently, coaching) -- where there is perhaps a tens of millions of dollars gap between what WSU and other more well endowed schools can spend -- the school wouldn't have to spend all that much more to get on par with its peers: The gap between WSU and the Pac-12 median is about $350,000.

With a relatively small monetary investment of $500,000, the Cougs would be the fourth-highest spending school in the conference.

I know Bill Moos has prioritized his resources, choosing to spend first on facilities and coaching. And both of those things most certainly affect recruiting. But as the revenue from media and renovated Martin Stadium continues to increase, this would seem to be a prime candidate for a relatively modest increase in spending for a potentially big return in talent.