The Monday After: Looking back at WSU's win over Arizona

In a game that was as dramatic as it was unexpected, the Cougs went into Tucson and beat the Wildcats with a late touchdown and a last-second defensive stand. We put a bow on it with our Monday After feature.

Share All sharing options for: The Monday After: Looking back at WSU's win over Arizona

Ten games into this season, following an unexpected road victory against Arizona, one thing has become incredibly clear: The defining characteristic of this 2013 Washington State football team is its resiliency.

The season was slipping away after losses in four of five games, leaving us to wonder after an embarrassing Halloween loss to ASU if the program really was making as much progress as we all hoped. But faced with the prospect of a season on the brink of spiraling into oblivion, the Cougs came up big in the face of adversity once again on Saturday.

These guys are grinders. Their ability to flush bad performances and come back strong the next week, as they have done now on three separate occasions, truly is remarkable and something to be admired.

It makes me think I probably jumped the gun a little bit on the commentary two weeks ago. The fan in me never will get real excited about the Rise Up Board on the sideline, but it's worthwhile to note that truly buying into the line of thinking it advocates -- don't worry about what's behind, focus on what's ahead, do your job to the best of your ability -- is the sort of thing that manifests itself in these kinds of bounce-back performances.

I was just about ready to bury these guys, and they proved me wrong in a big way.

There will come a day when it's appropriate to come after these guys for the sorts of uneven performances we've seen this year. And I suppose I sort of did that after the ASU game. But they've picked up the pieces enough times now that I'm satisfied with the progress the program is making.

Now, can we please build on this against Utah so that we don't have to put this resiliency to the ultimate test against Washington in two weeks with a bowl berth on the line?

I was chatting with Brian Anderson on Friday and just sort of casually asked, "Am I right to be terrified of what Arizona might do to us?" I was thinking of all the spread and misdirection concepts of Rich Rodriguez's offense, which are similar to Oregon and ASU, even though the details are different. WSU was solid against Oregon, but completely paralyzed by ASU. 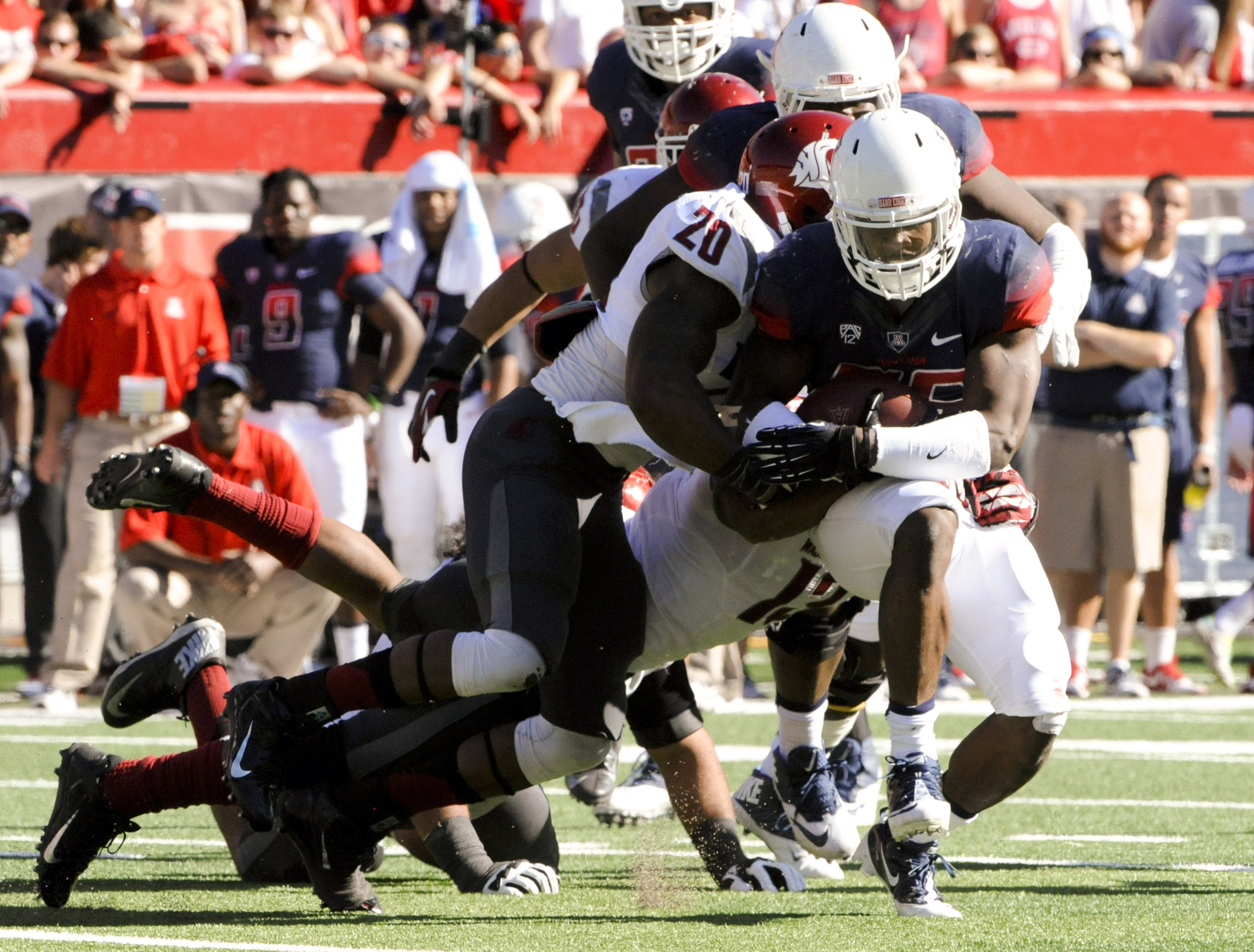 If you watched the so-called "hype video" that the team viewed in advance of Saturday's game, you know that it finished with this exhortation:

The Cougar defense did all of that on Saturday.

They did indeed play fast, which enabled them to return to the hard-hitting, downhill-tackling days of earlier this year; I couldn't help but notice Darryl Monroe getting back to doing what he does best, trying to separate ball carriers from their heads.

They also did their jobs -- at least I assume they did, because there didn't appear to be any major breakdowns with guys finding acres of space to run. Yeah, Ka'Deem Carey ripped off a 30-yard touchdown, but that's just what Carey does. It was the only play of 30 yards or longer in the game.

They played the next play all day, and that was no more evident than on the final drive. The Cougs looked to have the game won when they appeared to have Arizona quarterback B.J. Denker dead to rights on 4th-and-7 with less than a minute to go. My poor couch took the brunt of my frustration when he wriggled out of the grasps of a pair of Cougars to pick up the kind of first down WSU had avoided giving up all game.

Too many times, I've seen a team get deflated after a play like that. Faced with a new set of downs from inside the red zone, the Cougs forced an incomplete pass, a short completion, a short scramble where -- and this was so key -- Denker was tackled in bounds, and then finally a pass that sailed wide and led the receiver harmlessly out of the end zone. Game over.

Lastly, they certainly were able to count on each other in the most fundamental way: There were so few missed tackles, especially on Carey, who generally collects them like a trick-or-treater collects Kit-Kats. Things break down so fast when you feel like you have to compensate for your teammates, but WSU wrapped up consistently all day. Particular credit goes to Justin Sagote, who had easily his best game of the year with 12 tackles.

Like quarterbacks, coaches probably get too much blame when things go bad, so this seems like a good time to recognize defensive coordinator Mike Breske. I haven't watched the game a second time, so I don't really have any insights into whether WSU did anything special (particularly in the second half, where Arizona was held to just three points), but he clearly had his guys prepared to play. Kudos.

Honorable Mention: The running attack. Running backs picked up 118 yards on 20 carries, which is the sort of thing you would hope to do against a 3-3-5 preoccupied with stopping the pass. Halliday clearly was looking for fronts the Cougs could run against, and the offensive line did a fantastic job.

This isn't a performance specific critique, because I think it's pretty hard to find much fault in the performance. It wasn't perfect, for sure. Would I have liked more of a pass rush? Of course, although I believe some of that was due to a specific strategy to keep Denker contained in the pocket. Would I have liked more explosive pass plays? Sure.

But really, some of this is just a function of not quite being "there" yet, in either talent or maturity. These guys played their butts off.

So, in lieu of that, I'll wish for this: Another strong performance on Saturday that leads to the sixth Cougar victory. WSU hasn't had consecutive strong performances since the first four games of the year. It's time for that to change.

Coming into Saturday's game against Arizona, Connor Halliday had done a lot of things in his career at WSU. One thing he had never done? Lead WSU on a game-winning, fourth quarter touchdown drive. Check that one off the list!

I'll be honest: I didn't have a lot of confidence in Halliday's ability to do it. It's not that I didn't think he had it in him, but I had seen too many mistakes in too many critical moments to feel good about it. Then he orchestrated the drive of the season to prove me wrong. Check this out:

In case you're not able to do that math in your head, Halliday was 6-of-6 for 73 yards, which included a scramble that picked up a couple of yards and the final touchdown, during which he was flushed out of the pocket and found Isiah Myers with precisely the sort of pass that had turned into an interception so many times this year.

This time, it was gold:

Halliday's final line: 39-of-53 (74 percent) for 319 yards (6 yards per attempt) with two touchdowns and an interception. Like most everything else the Cougs did, it wasn't perfect, but it was good enough to win the game. And that's the most important thing.

Well, this one is fairly simple, as punter/kickoff man Mike Bowlin was spectacularly inconsistent -- as he has been all year. A three-yard punt, two kickoffs out of bounds ... I don't know whether to be glad he's a senior or terrified that there's nobody else on the roster better.

The Cougars welcome a reeling Utah team in to Martin Stadium for a game that starts at a time that is conducive to actually having a large crowd (12:30 p.m. PST). One has to wonder if Utah is having second thoughts about joining the Pac-12 after playing No. 14 UCLA, No. 10 Stanford, No. 23 USC, No. 19 ASU and No. 5 Oregon in six weeks' time. Yeeeeeow.

Travis Wilson out for Saturday 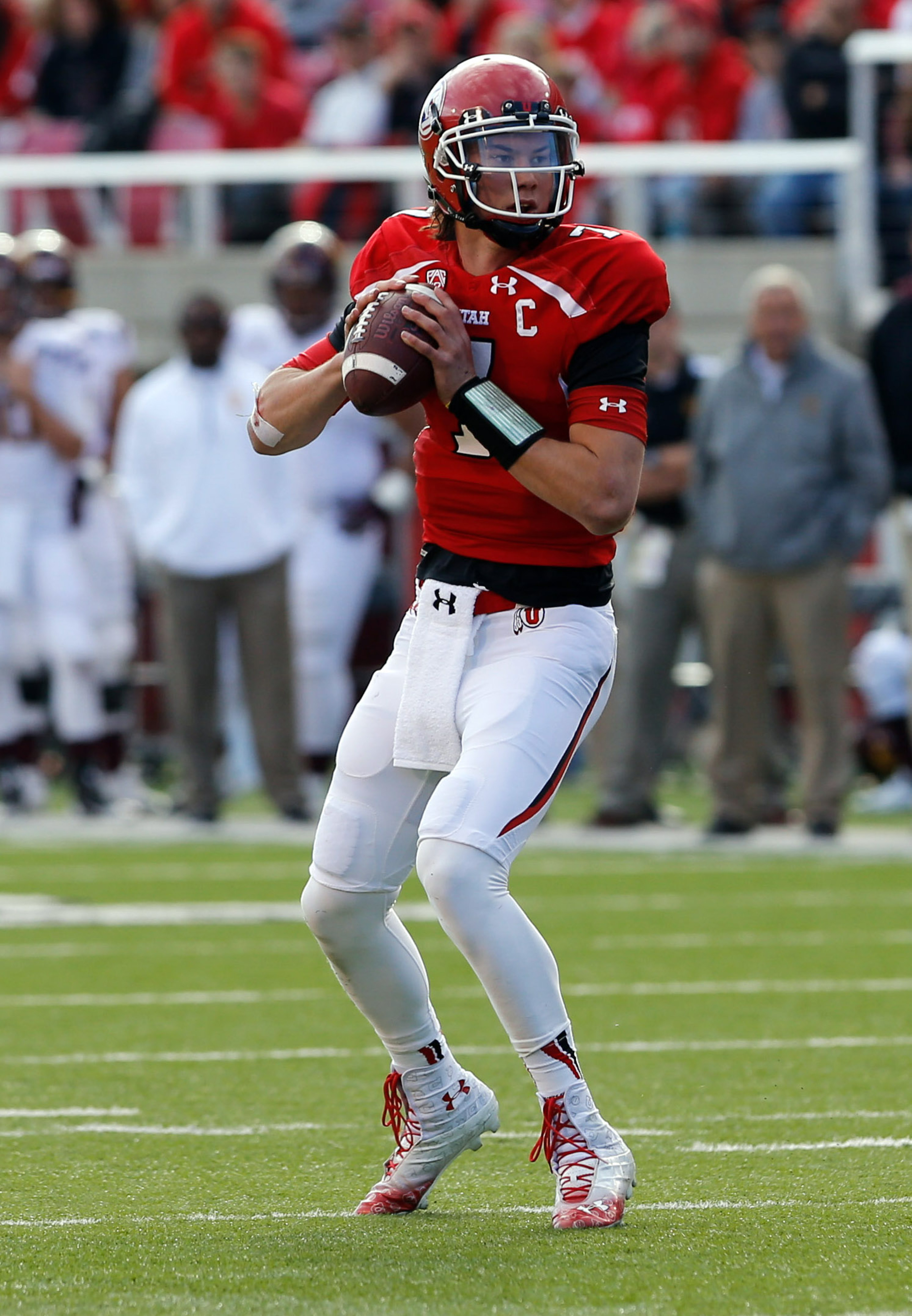 Not surprisingly, the Utes have lost four in a row and six of their last eight.

The two wins have come over BYU and Stanford, though -- combined record: 15-5 -- so there's obviously talent here. You likely will hear ad nauseam this week that Utah isn't quite the same on the road as it is at home, having lost to Arizona, USC and Oregon by double digits each. But go ahead and consider the competition, and understand that Utah hasn't exactly put up a bunch of stinky turds on the road.

Utah will be coming into the game without its quarterback, Travis Wilson, who is out for at least the rest of this year. It's an offense that already hadn't been great; the Utes haven't exceeded 5.0 yards per play since the middle of October. Of course, that's partly because of the murderers row they've played over the last month and a half.

The defense is stout, as usual, and the Cougs are likely to have some trouble protecting Halliday, as the Utes really get after the quarterback. Senior defensive end Trevor Reilly has seven sacks in his last four games.

The Cougs are early one-point favorites in the game. Of course, they were favorites against Oregon State.

Never in doubt: WSU holds off Arizona for 24-17 win