The Cal Golden Bears may be 2-4, but their offense has shown the ability to put up points against some good defenses.

The Washington State Cougars host the Cal Golden Bears this Saturday at 7:30 p.m. on the Pac-12 Networks. The Cougars defense will be trying to stop an offense that averaged 9.8 yards per pass and 6.7 yards per play overall against UCLA last weekend.

Note: I had this all typed up and finished, with my typical positional previews totaling over 1300 words. Then something happened, not sure what, and 1200 words disappeared. So this is the shortened version.

Cal is much better than their overall record indicates. Aside from one FCS opponent, they've played a tough schedule so far, with their FBS opponents combing for a 23-5 record. WSU's FBS opponents are a combined 15-11.

As far as opponent adjusted measures go, the Golden Bears have been pretty good, while WSU has been bad. Take a look at this chart that compares the two teams overall S&P+ (what's this?), Passing S&P+, and Rushing S&P+. Remember that 100 is average. 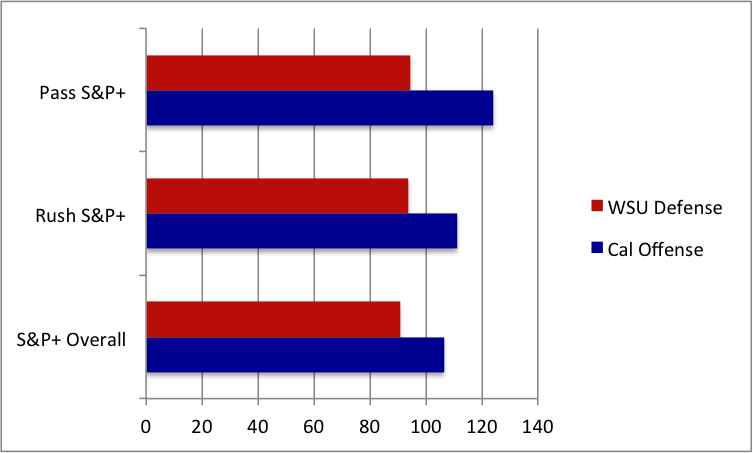 As the chart shows, WSU is below average in passing, rushing, and overall. Cal is above average in all three, with the biggest difference between the two coming in the passing game. WSU is six percent worse than the mean defending the pass, while Cal is 24 percent better.

Zach Maynard leads that passing game, and he has thrown more touchdowns this season, tossing one for every 20 pass attempts. Last year he threw a score every 24 attempts. That would account for about three touchdowns a year. An extra touchdown could be the difference between a win and a loss somewhere along the line.

Cal's top receiver is Keenan Allen. He leads the team in catches, and it isn't even close. Allen has caught 41 balls for 467 yards and four touchdowns. He caught eight for 85 against the Cougs last season, while his teammates made three grabs for 38 yards. Allen is good at making people miss, so look for Cal to get him in space. He will also go over the middle and grab the move-the-chains type throws as well. Just solid all around.

The chart above doesn't show the WSU defense to be much of a contest for the Cal running game, either. The Cougs are slightly worse at defending the run than the pass, while the Golden Bears are 11 percent better than average.

Isi Sofele and C.J. Anderson have split the bulk of the carries, but Anderson has been much more effective. Sofele is gaining 4.9 yards per carry, while Anderson is picking up 6.8 per rush. Head coach Jeff Tedford seemed to notice this as well, as Anderson got the vast majority of the work against UCLA.

The Golden Bear running backs are also able to bust big plays, especially Brendan Bigelow. The sophomore made a splash with two long runs against Ohio State. The second one is below, check out SB Nation's post on Bigelow's day against the Buckeyes for video of the better run.

The Cougars have frustrated fans all season by giving up big gains on third down, even when they have the offense in a difficult situation. The numbers do show that, but WSU has improved.

Check out this chart, with performance on passing downs, standard downs, and the overall percentage of successful plays (half or more of the yardage on first down, 3/4 on second, all on third and fourth). 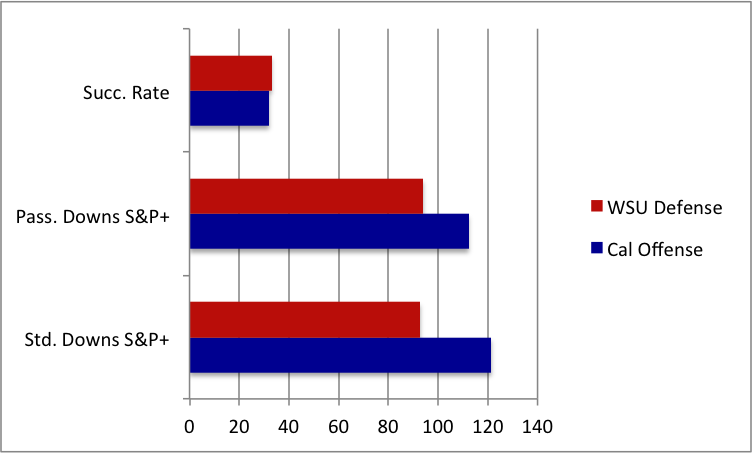 As you can see, Cal is well above average in standard and passing downs. Their standard down performance is their best asset, probably because of the way they are able to pick up large chunks of yardage on the ground. WSU has been bad on both types of downs.

The success rate is interesting. The Cougars have limited opponents to a 33 percent success rate, which is in the middle of the pack nationally. Cal has been successful on just 32 percent of plays, but they've faced much tougher defenses than the Cougs.

For WSU to be successful, the front seven will need to continue their solid play. The Cougars are far too weak in the secondary, and Maynard will take advantage if given the time. Putting pressure on Maynard, who is prone to give away the ball in bunches when under siege, will be vital (as it always is).

Will the Cougs be able to sack Maynard? The stats say yes. The chart below shows the number of dropbacks per sack for the WSU defense and the Cal offense, and also shows yards per carry for both sides. 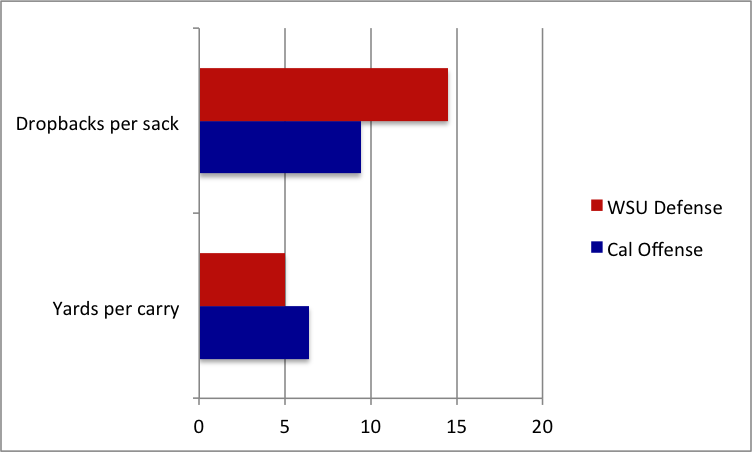 The Golden Bears are giving up sacks every 9.4 dropbacks, and that has totaled to 28 sacks for the year. Whether it is Maynard holding on to the ball too long, or the offensive line failing, or probably both, that is too many sacks This is an area where the Cougars can gain some ground.

The Cal offensive line seems to be much more adept at run blocking. The Golden Bears are picking up 6.4 yards per carry, allowing them to get in favorable situations on later downs.

Travis Long, Ioane Gauta, and Toni Pole (among others in the front seven) have the chance to keep the Cougars in this game. The Cal offensive line seems like it can be exploited, and for the first time in a long time, WSU might just have the personnel to do that.

WSU will have to continue their trend of avoiding big plays. The secondary didn't lose anybody deep against either Oregon State or Oregon, and that is an encouraging sign. Linebackers need to be sure in tackling on the running backs, because they have the speed to break long runs.

This will certainly be a tough task for the Cougars, as the Cal offense has plenty of weapons. If WSU can continue their upward slope, at least holding the Golden Bears down enough for the offense to have a chance is a possibility. It's not likely, but it's not impossible either.