The Cal defense has been among the Pac-12's best for the last few years, and not much has changed in 2012.

The Washington State Cougars will face a tough Cal Golden Bears defense when the two teams meet Saturday at 7:30 p.m. on the Pac-12 Networks. As was the theme with their offense, Cal's defense has played some good teams and is better than their raw numbers may indicate

The Golden Bears have limited WSU to 3.2 yards per play in their last two meetings, while the Cougars have mustered just 20 points combined in those two contests.

The good news is, WSU followed up each of the last two games against Cal with a win. You better watch out, Stanford.

As with the offensive preview yesterday, Cal's defense looks much better than WSU's offense in opponent-adjusted measures. The chart below shows how the two compare in overall S&P+ (what's this?), passing S&P+, and rushing S&P+. Again, 100 is average. 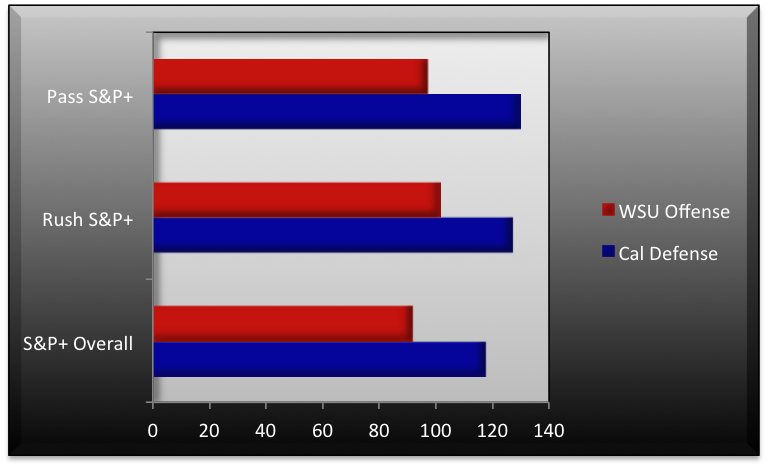 The Cougars running game is apparently above average, which is surprising. The Cougars must be having more successful running plays that it feels like, because as will be shown later, their yards per carry leaves something to be desired.

WSU's passing game is just below average, and that is definitely not a surprise. The Cal defense has excelled in defending the pass, as they are a 30 percent better than average.

Overall, WSU is facing a solid defense, which rates out as nearly 20 percent above the mean. The Cougars are eight percent below, so they will have to play better than they have been to be successful.

A big part of the Golden Bears' pass defense is their talented secondary, led by cornerback Steve Williams. He has been all over the field, tying for the team lead in tackles with 40, intercepting two passes, breaking up another three, and recording 3.5 tackles for loss. Cal has a solid group of defensive backs that will make it hard for a Cougars receiving corps that has had difficulty creating consistent separation.

As far as types of downs go, there is a particular area where the Cougs have performed well. As the chart shows, WSU has bailed it self out quite often on passing downs, and it has been just bad on standard downs. 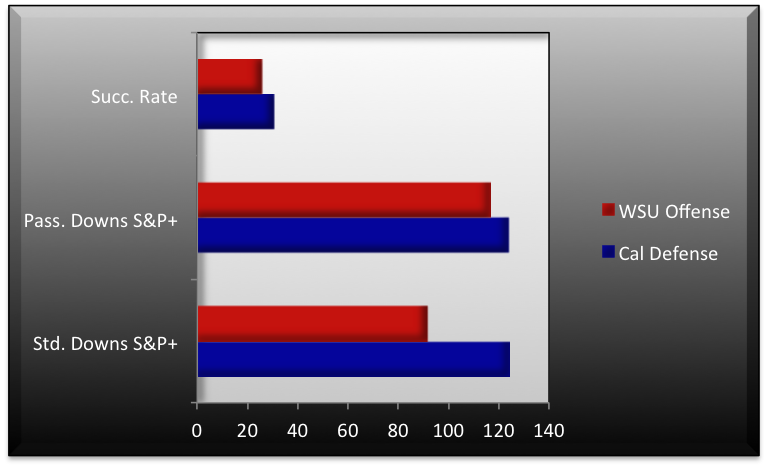 The Cougs are 11 percent better than average on passing downs, as they've converted quite a few third and longs. I once told Nuss during a game that with Connor Halliday, a 3rd and 5 seems the same as a 3rd and 15. That appears to actually be the case. WSU is completing just 33 percent of passes on 3rd and 10+, but they are still averaging 7.8 yards an attempt. That is due to the 21 yards per completion the Cougs are gaining.

It's lucky that WSU has been explosive on passing downs, because they have a low success rate of 26 percent overall and their performance on standard downs is eight percent below average.

One sign of hope may be on the 3rd and 10+ downs that were mentioned earlier. Cal is actually allowing 17.8 yards per attempt in those scenarios. Halliday and Marquess Wilson may be able to exploit the Golden Bears for some big plays when the situation seems most dire.

This gif is a perfect example, as Ohio State quarterback Braxton Miller tosses deep to a wide open receiver on the scramble drill. Halliday makes plenty of plays in this situation, so it could be a good thing.

Whether or not the Cougs will be able do well on standard or passing downs will have a lot to do with the battle at the line of scrimmage. This may be another positive sign, as it could be a place where WSU does well. The chart below shows Cal's yards per carry allowed versus WSU's yards per carry, and Cal's sack rate against WSU's sack rate allowed. 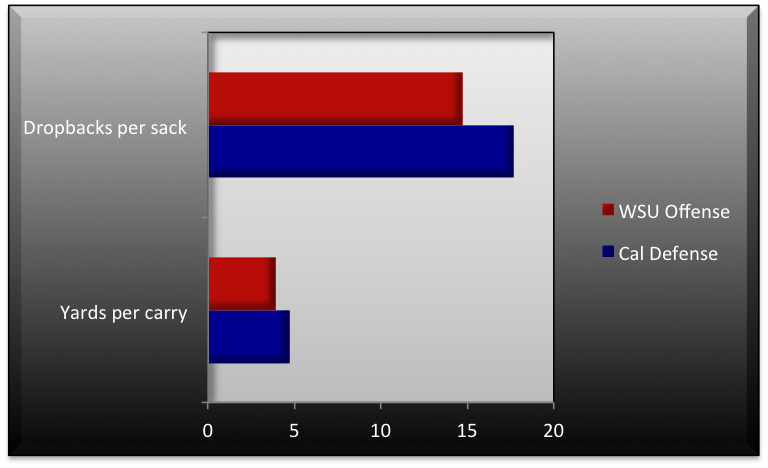 Remember, those yards per carry have sacks removed. WSU is averaging 3.9 a rush, which is why that above average S&P rating is even more puzzling. Most likely, the Cougs have gained good yardage on rushes in positions where scoring is likely.

The Golden Bears are allowing 4.7 a rush, which is solid considering they just played Johnathan Franklin and the UCLA Bruins. The Cougars offensive line will continue to struggle in creating holes for running backs.

Cal hasn't done all that well in sacking the quarterback, getting one every 17.7 dropbacks. Considering the Golden Bears will likely employ the same strategy that has worked against the Cougs all season, dropping seven and eight back into coverage, there will probably be even fewer sacks in this game.

If Cal does get to the quarterback, it is generally with the linebackers. That group has 8.5 of the 14 sacks the team has recorded. This may play into the favor of the Cougs, as Cal's best pass rushers may be staying back in coverage, or off the field altogether.

Even if the offensive line is able to protect Halliday, it is going to be tough sledding against the Cal defense. They have a solid secondary (that gif notwithstanding) that should be able to stick with WSU receivers, meaning Halliday is going to be tempted to fit the ball into tight spaces once again.

This could mean more interceptions. It will have a lot to do with how much Halliday learned from his experience against Oregon State, and whether or not he will start taking more of the underneath, uncovered routes that led to success against Oregon.