Connor Halliday looked lost in the Air Raid at times during his sophomore season, but improvements in 2013 may have the WSU passing game ahead of schedule.

The Washington State Cougars and Connor Halliday put up the most prolific passing performance of the Mike Leach era with 521 yards on 67 attempts in a 44-22 win over the Cal Golden Bears on Saturday. The numbers were Halliday's most impressive since his first appearance at WSU, when he passed for 494 yards.

But that opening performance wasn't in Leach's Air Raid offense, and Halliday's adaptation to the system is central to WSU's improvement. It has been a frustrating ride, but now that Halliday has nearly matched his total passing attempts from 2012 in 2013, it's safe to say that WSU's starting quarterback is making real progress.

Take a look at the two seasons side-by-side, and you'll find that Halliday's 2013 is better across the board:

Charting every pass against Cal 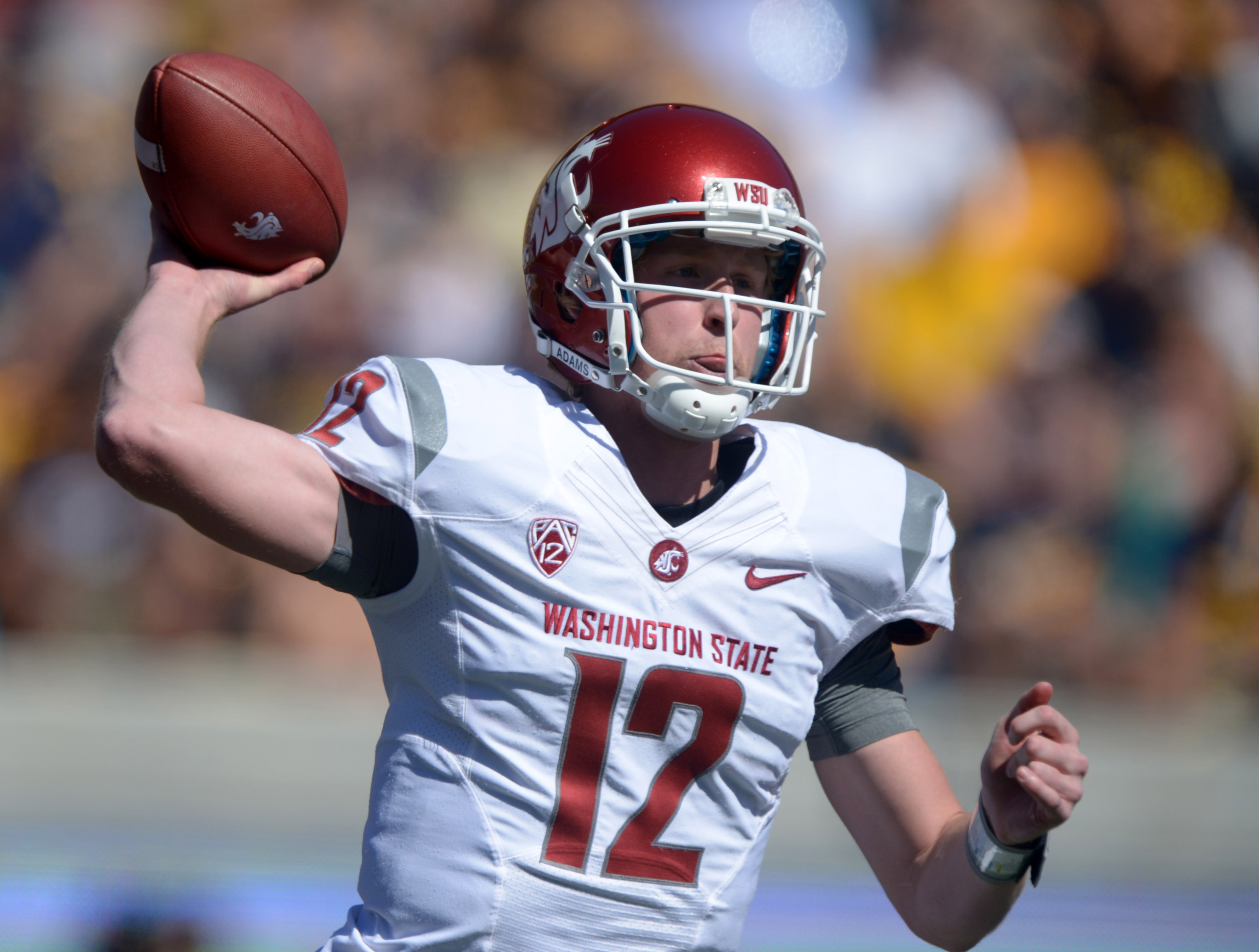 Brian Anderson takes a look at where every single Connor Halliday pass was thrown in the win over Cal.

Halliday is obviously taking more of the short game and that is meaning easier completions. Still, one might expect a higher jump in yards per attempt with so many more completions, so there is still room to improve for Halliday in hitting his receivers accurately, and for his receivers to do better after the catch.

That yards per attempt difference doesn't seem like much, but check out the difference in total yards: 115 more on one less pass. Keep that up over an entire season and that's several touchdown drives' worth of yardage.

And of course, there are the interceptions. Over the course of the season, Halliday has thrown too many. He is tossing them at a rate of 3.4 per every 100 throws. The national average for 2013 is 3.0 interceptions for every 100 passes thrown.

The difference between Halliday and the national average doesn't seem to be big, but remember the Air Raid has more low-risk throws than typical passing games. A lower interception rate is expected, and that's clear from Leach's Texas Tech Teams.

There are 10 years of data available from Leach as a head coach at Texas Tech, so a pretty solid picture of what the Air Raid has looked like can be painted. Here are Halliday's 2013 yards per attempt and interception rate against the aggregate numbers from Leach's TTU teams:

There is still work to do for WSU in efficiency and interception rate. That 1.2 percent difference in interception rate would mean six picks at this point instead of 10 for Halliday. If that were the case, WSU might be sitting at 5-1 with a loss to Stanford as its only blemish.

But don't start pulling hairs yet -- Halliday's performance against Cal was encouraging. Just one interception in 67 attempts equates to a 1.5 interception rate. One thing that can definitely be taken from that number and the TTU interception rate? There will be interceptions. Almost all of Leach's Tech teams averaged more than one per game.

The Cal game brought Halliday's interception rate in Pac-12 play down to 2.8. If he throws 290 passes in the second half of the season and is intercepted with the same frequency, he would throw eight more picks. Not ideal, but a step in the right direction.

In terms of yards per attempt, it looks like WSU is struggling to match Leach's Texas Tech success. But a gander into the year-by-year data shows that the Cougs might actually be ahead of the curve: 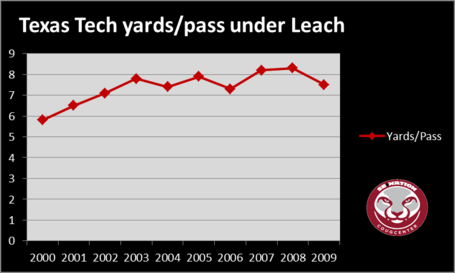 WSU gained 7.7 yards per pass against Cal, and face another weak pass defense against Oregon State next (the Beavers are allowing 8.1 yards/pass). With a second-straight big performance, Halliday could be up over seven yards per attempt, or where TTU was at in Year 3 under Leach.

The work of the offensive line also can't be ignored here. WSU's opponents have sacked the quarterback just 10 times, or once every 33 attempts. That's a drastic improvement over last season, when Coug QBs were getting tossed to the ground every 11th try.

Washington State isn't going backwards when it tries to pass, and that means the improvement in yards per attempt is that much more important.

Overall, there are plenty of encouraging signs for Halliday and the rest of the WSU passing attack. The offense is heading in the right direction and big yardage days may soon become the norm.