Cal brings their Bear Raid to Pullman following consecutive barn-burners. Can Wazzu keep it in check?

After some figurative growing pains and very literal injury pains in the first year under Sonny Dykes, the California Golden Bears look much improved this season, at least offensively. Dykes and his offensive coordinator, Tony Franklin, are both branches of the Hal Mumme Coaching Tree and have implemented an Air Raid style at Cal -- dubbed, "Bear Raid."

However, it's not quite the same thing we're familiar with on the Palouse. Coug linebacker Jeremiah Allison put it best during his media session on Monday, where he called them "fraternal twins".  They're close, but Dykes-Franklin are really starting to develop their own brand in Berkeley.

Most notably you can see it in their run game. The Bears have run the ball 164 times -- 54 percent of their offensive plays -- accumulating 687 yards in the process. The "Bear Raid" has grounded a bit, shifting from last year's near 52 pass attempts per game to just under 35 this season.

Jared Goff and the receivers are still extremely productive -- racking up 363 yards per game with 10.2 yards per attempt -- but when you expect two teams to air it out against one another, as we do this Saturday, it might end up being the Bear ground game that causes problems for the Cougs.

Cal's leading rusher is junior Daniel Lasco, who has 55 attempts in four games for 347 yards. Both Lasco and the Bears' other back, Khalfani Muhammad, have 50-yard TD runs. Five of Cal's top seven receivers have a touchdown reception over 60 yards. Half of the Bears' 24 touchdowns have come from drives of five plays or less.

The Bears could arguably be the most explosive team in the conference right now. Although they look fairly middling in the following table at first blush, closer inspection reveals they have the most plays going for over 30 yards from scrimmage and are second in the conference in plays over 20 yards.

On Monday, Jeff Nusser highlighted just how deceptively adept the Wazzu rush defense has been over the season, but it came with a caveat -- you had to cherry pick the data just a little: The Cougs have held every opponent they've faced under their yards per attempt rush average this season ... if you remove the single longest run from scrimmage in each game.

The Wazzu defense has given up at least one rush of over 40 yards every time they've faced an FBS opponent, and that one play has accounted for more than a quarter of each opponent's rushing total in three of the four games:

How do big plays happen? Occasionally, it's due to some poor tackling, but mostly it's just guys not being where they need to be to make a play.

We find a decent enough example in Devontae Booker's 76-yard touchdown run for the Utes.

The WSU front was all sorts of aggressive against Utah, as it was against Oregon. "Aggressive" doesn't always apply to the pass rush either. The Cougs stunt and shift up front, with those backers flying around, filling gap responsibility against the run, too.

In this play, Utah lines up in a 2 x 2 formation, with two receivers on each side of the quarterback, and the Cougs are in their standard Base 3-4 look. Buck is standing up on the boundary side, Allison and Monroe are over tackles inside, and Coen is out in space to the field side.

Buck (left, top) crashes hard down the line at the snap and Allison fills the outside lane behind him. The defensive end (right, bottom) leverages outside on the tackle, ultimately losing his footing. Coen reads run and slams the outside lane closed, forcing things back inside: 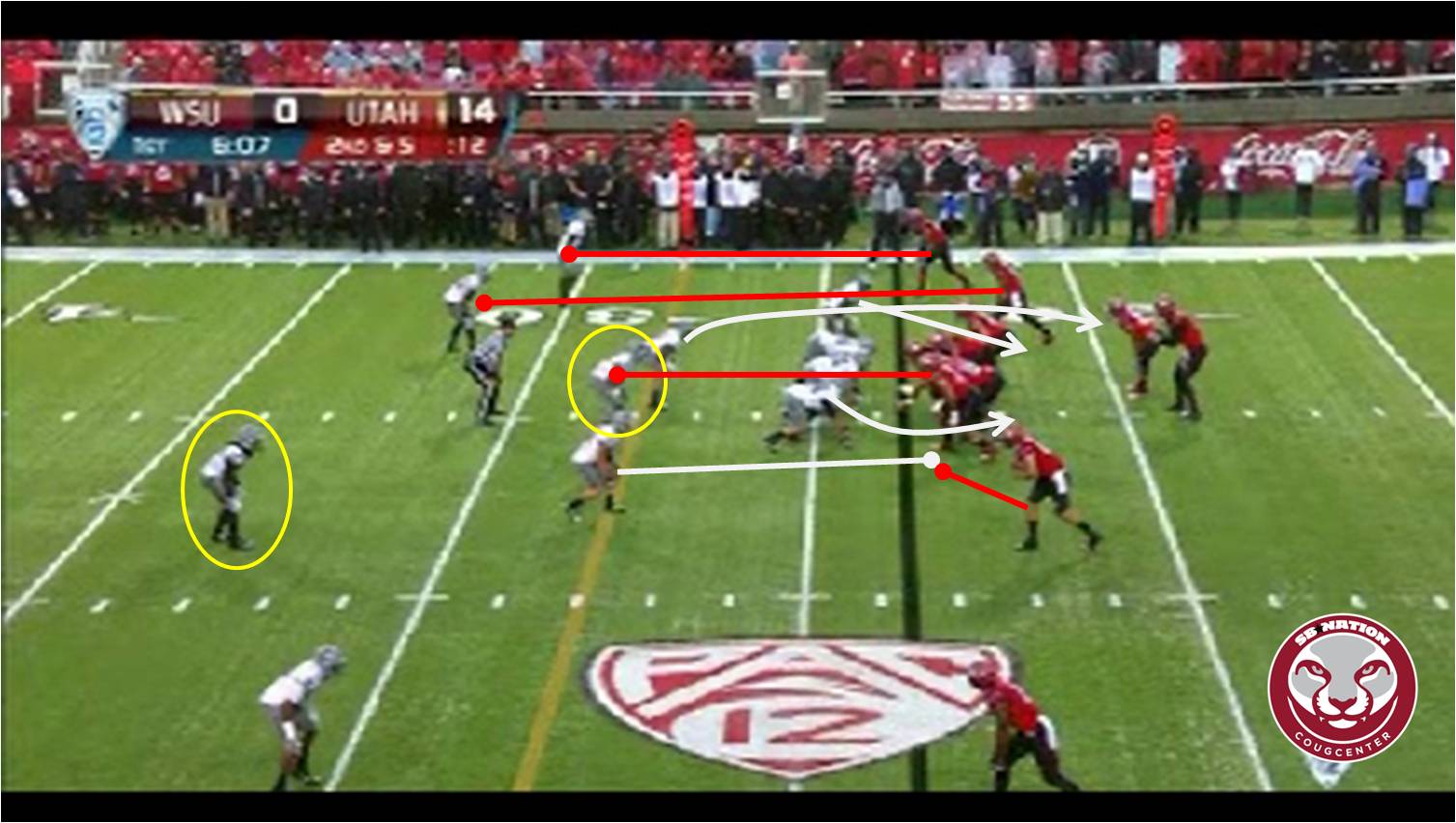 After the snap, the guard (or possibly center, kinda hard to tell) passes up doubling Xavier Cooper to hunt down Monroe at Mike. Cooper beats the single blocker, but just a hair too late and isn't able to bring Booker down with an arm tackle.

This is where things get a little hairy. Monroe opens his hips and overruns the gap, then seems content forcing a cutback...but there's no inside help with Allison now behind the line of scrimmage.  Sulaiman Hameed fills outside-in instead of inside-out and runs into Monroe and his blocker. The inside receiver up top gets a good block on Darius Lemora and Booker is off to the races with friends in tow.

Without knowing the defensive call it's tough to say if anything went awry, but Monroe's technique wasn't really in tune with what Allison or Hameed were doing...and sometimes a back just makes a great play.

Jeff Faraudo of the San Jose Mercury News has all the relevant bad stats for Cal's secondary, if you're into that sort of thing. Cal's defense isn't that good, and we could pour numbers and rankings on top of that and break down what will work in the pass game, but that's more or less unnecessary. If the Cougs' offense doesn't roll on Saturday it will probably be their own fault.

While the pass game match-up will get the most attention, and deservedly so, it could end up being that one run play -- that one missed assignment on an innocuous rush attempt that ends up being a 50-yard, six-point mistake that could mean all the difference. Both of Cal's last two games required every snap to decide a victor, so there really is no reason to think they won't be able to push the Cougs for four quarters in Pullman.